20 Endangered Animals in India You Must See Before They Vanish

Majority of the land in India is covered by forests, the Western Ghats, the Indo-Gangetic plains, the great Himalayan region and the hills of the North-East. The country boasts of great abundance of fauna and is a home to many peculiar animals, in which, unfortunately, the issues such as poaching and encroachment have threatened their chances of survival, which have led to a steep reduction in their number. The wildlife authorities are now ensuring that strict measures are taken to prevent their extinction and guarding their natural habitats. Such steps have also helped in saving a few of these animals. However, a few others have become so scarce that they are not often spotted and might soon turn extinct if not well protected. Here are 20 such endangered animals inhabiting the jungles of India, which need to be saved, else the future generations might just not get to see even one of them.

1. Great Indian Bustard
The world renowned Great Indian Bustard, is one of the most critically endangered birds in the country today. The structure of the bird resembles that of an Ostrich, since both of them have long, thin legs and a relatively puffed upper body. Although they were found in great abundance in states like Haryana, Madhya Pradesh, Karnataka and Rajasthan, there numbers have dwindled significantly over the years. According to a census conducted in 2008, only 250 birds of this species were found in the country, alerting wildlife authorities to initiate steps required for their protection. 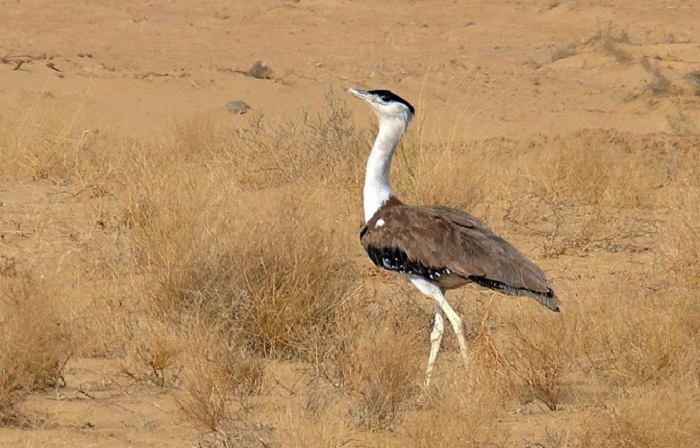 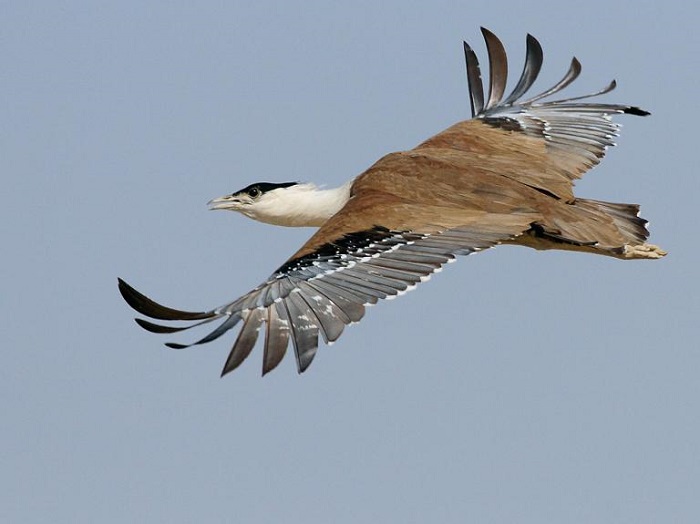 2. Gangetic River Dolphins
Apart from its great religious significance, the river Ganges is also inhabited by a peculiar species of Dolphins, which are mainly found in south Asia, predominantly in the Ganga and Brahmaputra rivers. These exotic creatures have become vulnerable to external threats such as falling prey to poachers. The Indian government has even declared this endangered creature as its national aquatic animal. 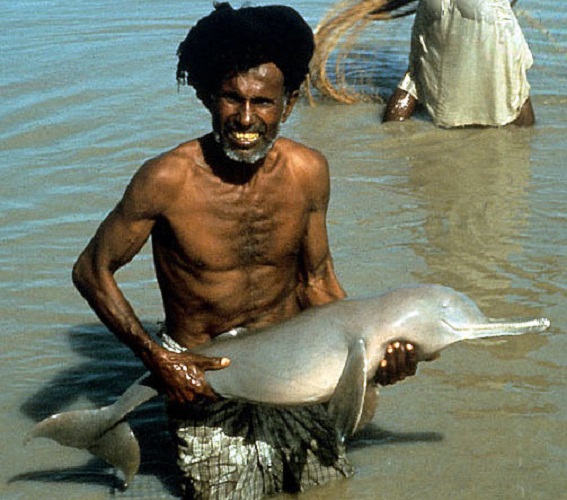 3. Royal Bengal Tiger
Many nature lovers and wildlife enthusiasts from around the world also throng India to get a glimpse of the majestic Royal Bengal Tiger. As compared to their population five decades ago, the Bengal tiger popular has reduced drastically and they are now restricted to a few pockets in India. However, measures such as ‘Project Tiger,’ by the Indian wildlife authorities had brought its population steadily up to around 2,230 existing tigers as of 2014. 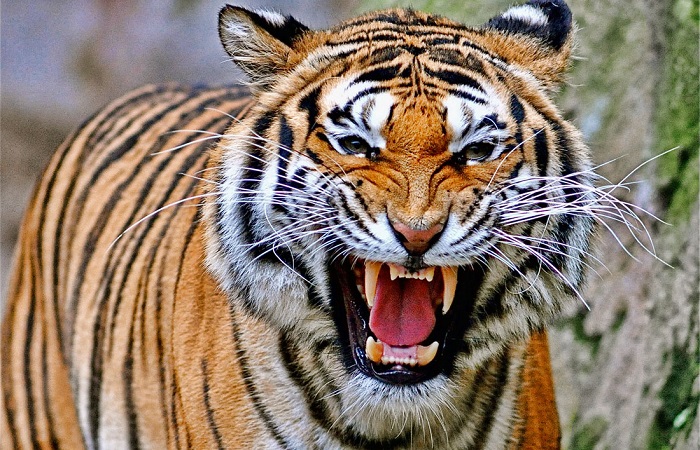 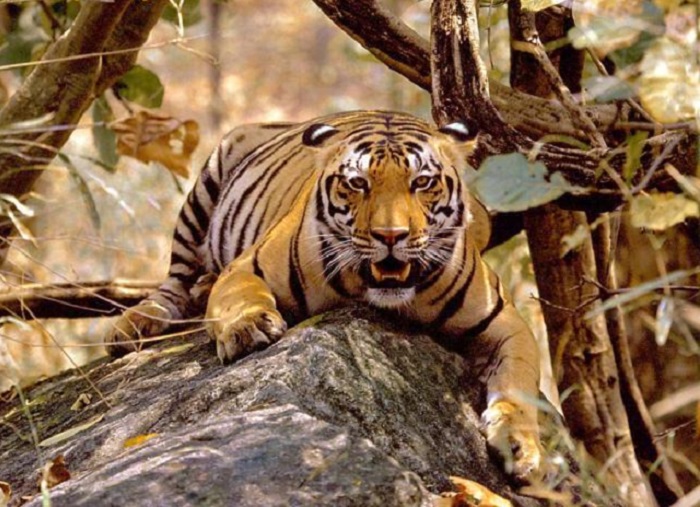 4. Lion Tailed Macaque
Its rich black texture and stiff black tail which is no different from that of a famous predator, makes the Lion Tailed Macaque really attractive. The shades of silver and White around its cheeks, makes it look poles apart from the rest of its kind. This creature is mainly found in the jungles of Tamil Nadu and Kerala. If a 2007 survey conducted by the wildlife authorities of Tamil Nadu is to go by, their number is estimated to be around 250 to 300. 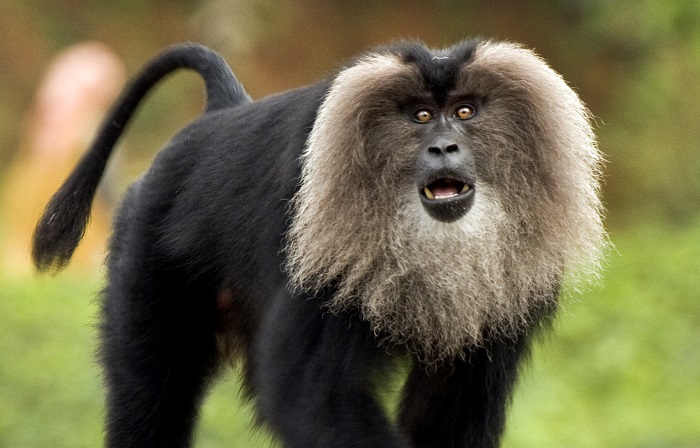 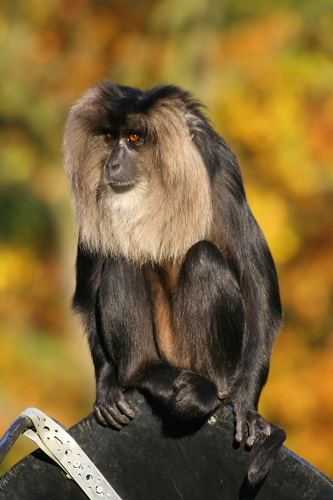 5. One-horned Rhino
The endangered one-horned Indian Rhino is confined to the North Eastern state of Assam, West Bengal as well as the marshy lands of Nepal. This animal is seldom found in any other part of the country. The ‘Kaziranga National Park’ in Assam is a reserve meant exclusively for the protection and welfare of the endangered one-horned rhinos. These animals are usually poached for their horns and during the 1980-90 decade more than 600 Rhinos lost their lives after falling prey to hunters. 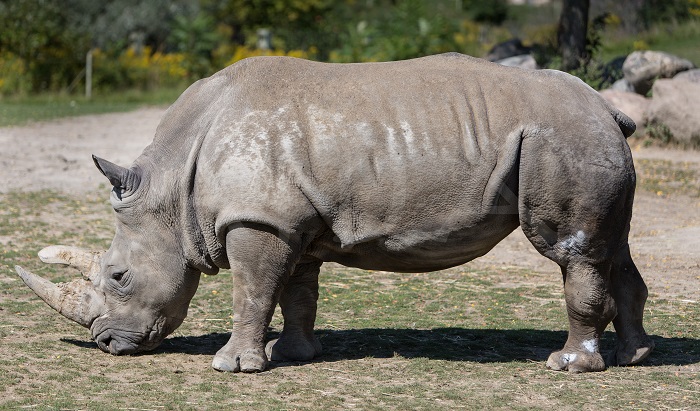 6. Indian Bison
The body of the Indian Bison, also known as ‘Gaur,’ is more than 8-feet in length and weighs around 1000-kilograms. These animals are found in large numbers in the south Indian forest ranges of Bandipur, Nagarahole, Mudhumulai and Wayanad. According to a census conducted in the 1990’s, the population of the Indian Bison was around 12,000 to 20, 000 but since many of these animals have been on the receiving end of road accidents within these national parks, that being one of the many reasons which have led to a great reduction in their population. 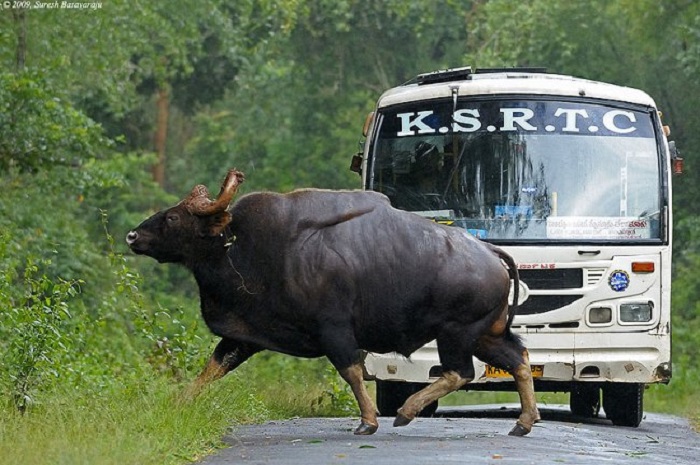 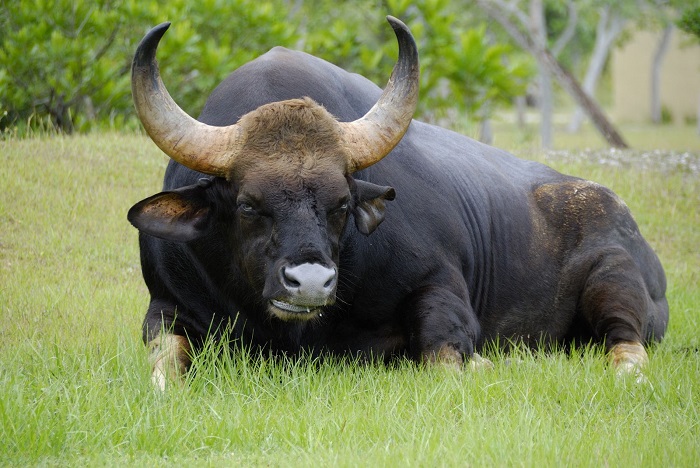 7. Black Buck
Although the population of this unusual looking Antelope species was around 50,000 in 2001, many Black Bucks have succumbed to hunting and poaching over the years. These antelopes, known for their black complexion and spiraling horns are found in many parts of Rajasthan and even Karnataka. Wildlife authorities and nature lovers have been trying their best to stop this alarming trend by restricting human movement in sanctuaries meant exclusively for these animals. 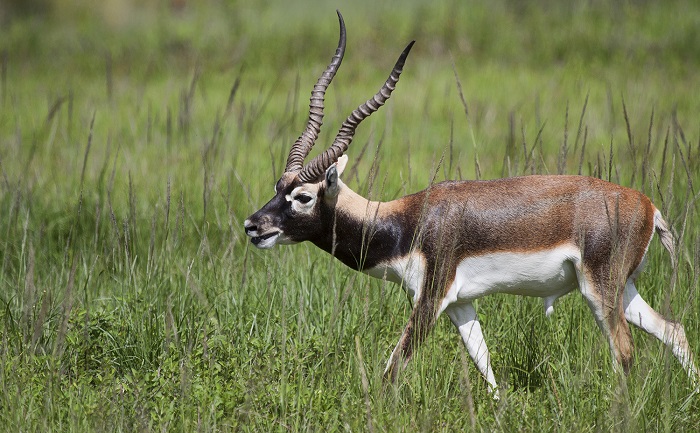 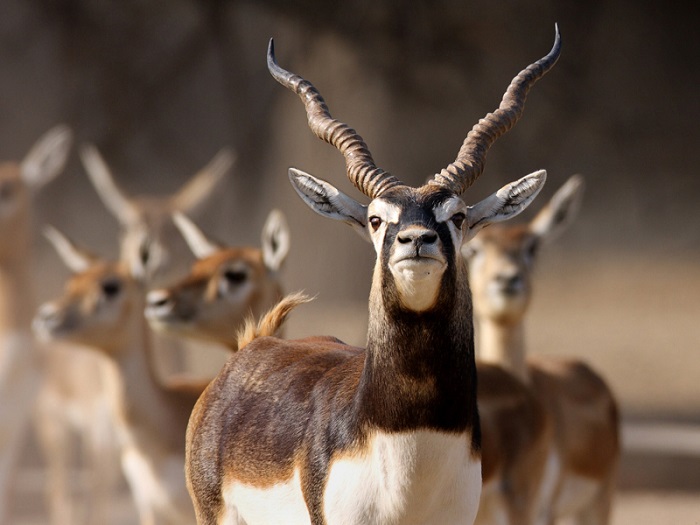 8. Asiatic Lion
The Asiatic lion, especially the ones settled in the Gir forests of Gujarat, have been threatened by human settlements in the periphery of the jungles. Part of the forest range, which is home to more than 400 lions, has been illegally fenced with electric wires, which has been leading to the deaths of many lions. Many lions also accidentally fall into man-made wells and lose their lives. Hence adequate measures are to be taken to ensure the protection of this endangered wild animal. 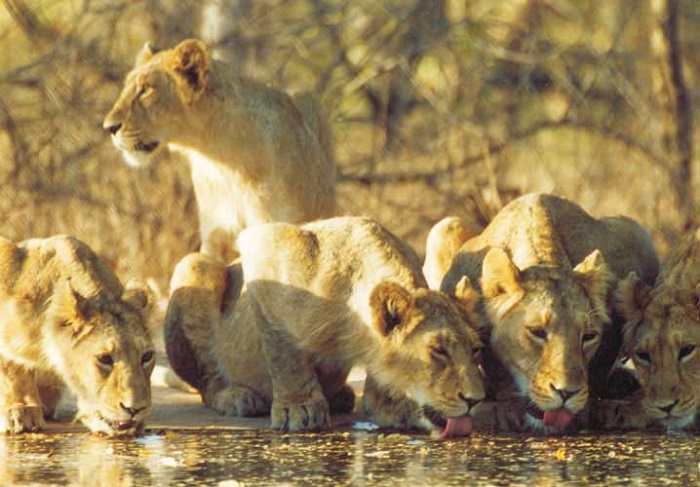 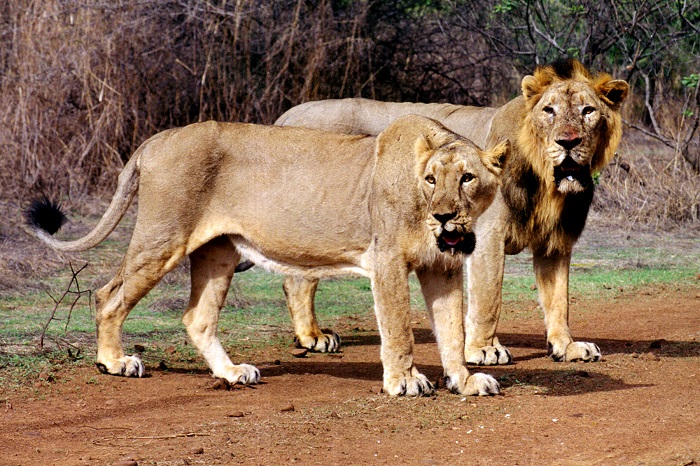 9. Olive Ridley Sea Turtle
The Bhitarkanika forest reserve in Odisha is home to several hundred Olive Ridley Sea Turtles, with the population sharply decreasing every year. The adult turtles vary from around 60 to 70 centimeters in length and are characterized by a thick, dark outer shell. Eggs of the Olive Ridley turtles are being poached for economic purposes. 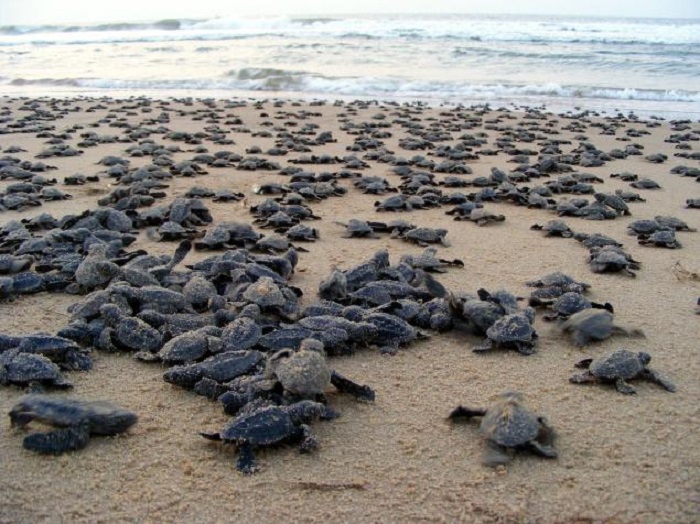 10. Malabar Large Spotted Civet
This animal which seems more like a Hyena is the Malabar Large Spotted Civet, which is mainly found in the Western Ghats region of Kerala. These Civets are known for their gray complexion and dark spots on their skin. During the period 1960-80, it was believed that this animal had become almost completely extinct, due to increase in deforestation in many regions of the Western Ghats. The animal was also hunted on many occasions for its skin and other body extracts. 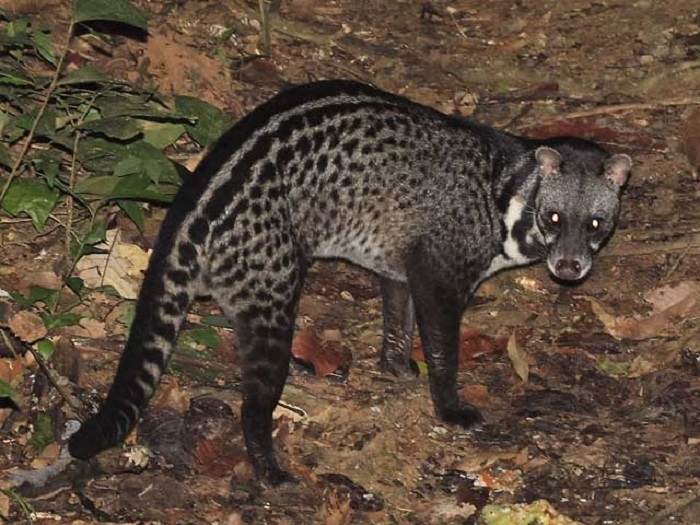 11. Himalayan Wolf
Also famously known as the Tibetan Wolf, these creatures are found in the snow-capped Himalayan ranges of Jammu & Kashmir as well as in Himachal Pradesh. According to a census conducted recently, approximately 300 Wolves were found in these states situated in the North of India. The wolves wander outside their secure habitat quite often, threatening human settlements. 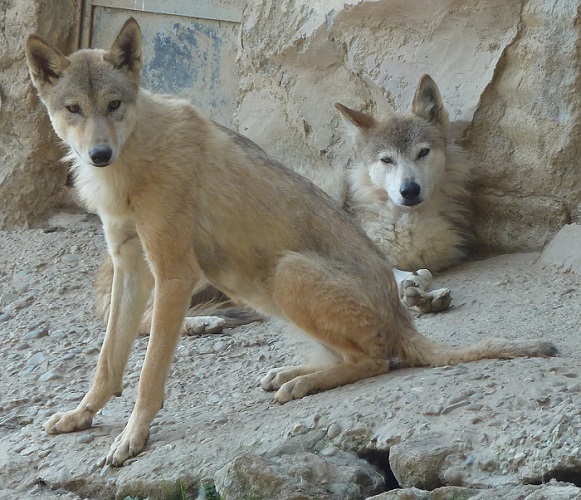 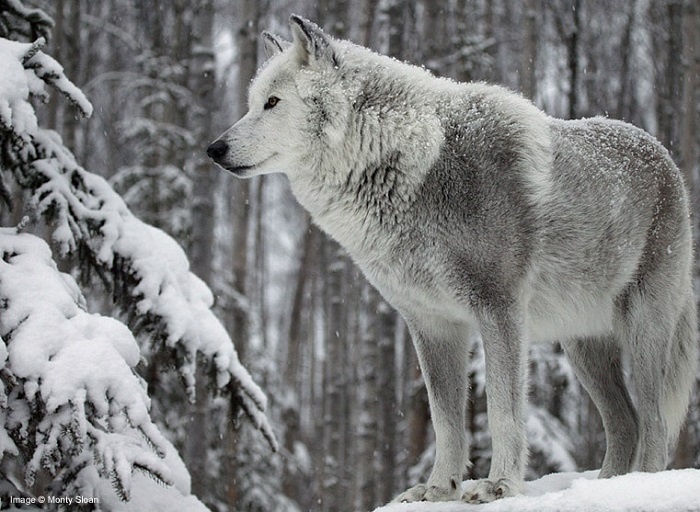 12. Clouded Leopard
Although leopards with yellow-complexion and black spots are common in many parts of India, the clouded leopards are scarce. Found mainly in the Himalayan foothills and the neighboring Nepal, these exotic animals have hardly been spotted in a decade by cameras or humans, thus making it difficult to assess their population. The Clouded Leopards are said to be the smallest of all wild predators belonging to the cat family. 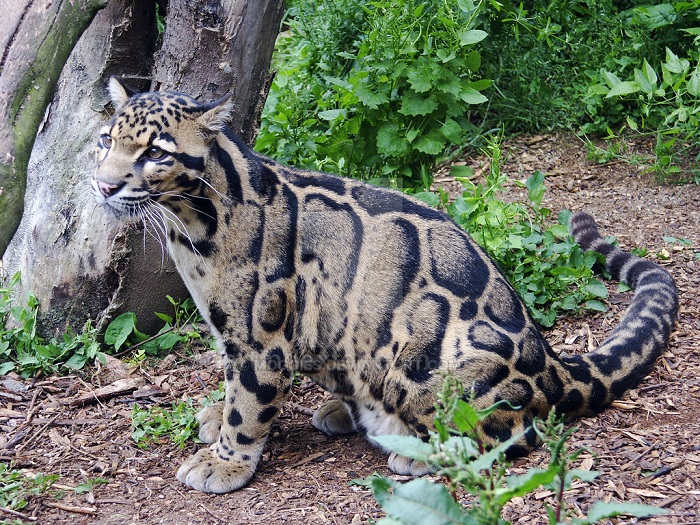 13. Red Fox
This brown colored, slender animal is also referred to as the Bengal Fox and is mainly found in southern India and in the regions near Nepal. It is claimed that only 2% of the total forest land in the Western Ghats is safe for these endangered creatures, otherwise they are vulnerable to human predator attacks. Many of these animals are butchered for religious rituals. 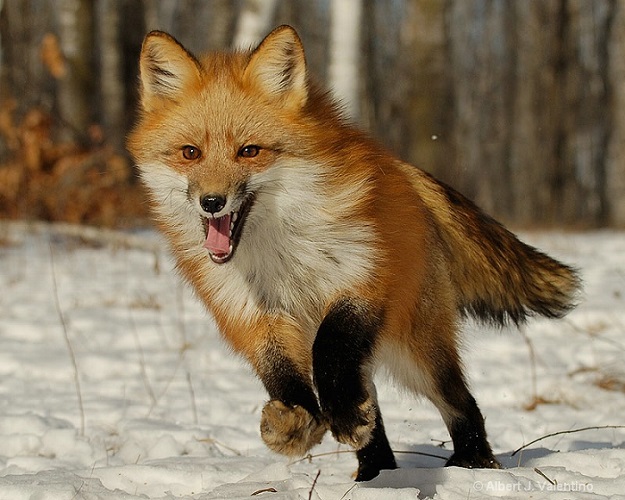 14. Loris
The ‘International Union of Conservation of Nature’, ‘IUCN’, has rated this nocturnal creature as ‘Highly Vulnerable,’ during one of their wildlife researches. These Slender creatures, known for their bright brown eyes, weigh around 2-kilos are now scarcely found in the North Eastern states of Assam, Tripura, Manipur and Meghalaya. Many of these animals have perished due to a loss of habitat, since the trees of tropical forests are continually being axed to be smuggled illegally. It is believed that many even trade these animals at markets situated outside India for a price as low as $7. 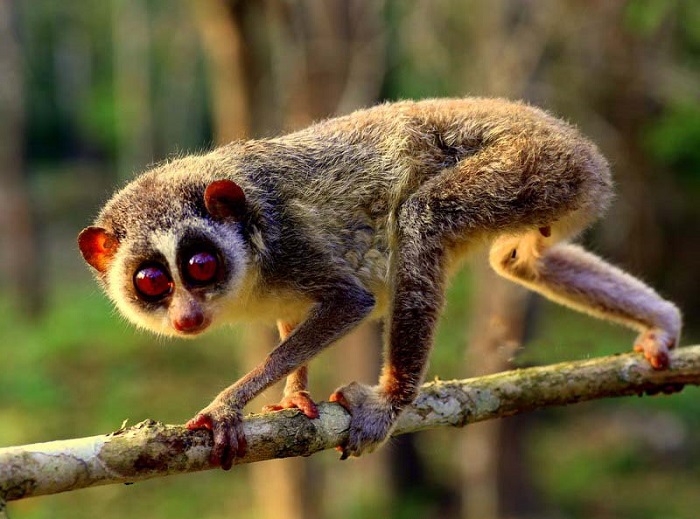 15. Nilgiri Langur
Predominantly found in the Nilgiri hills of Western Ghats, the abundance of these monkeys have slowly started to decline in the region. The animals were killed for extraction of their flesh and organs to prepare a form of medicine. However, the Wildlife preservation act of 1972 has put an end to the cruelty of these animals. Yet, the encroachment of humans into forest regions of the Western Ghats and deforestation has caused a threat to their survival as well. 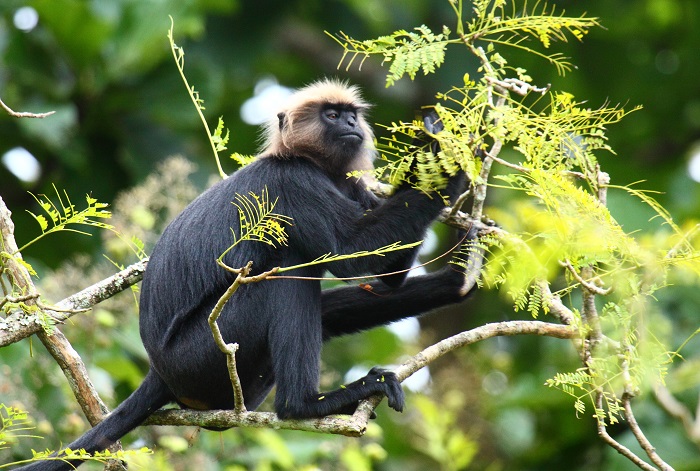 16. Golden Monkey
This monkey, also popularly recognized as the golden Langur, earned its name due to its shiny, golden brown complexion. The forests of North East India, especially the plains of the river Brahmaputra, are populated with these animals. As per a survey conducted in Tripura in 2000, only around seven animals of its kind were found in the region, which is alarming. Although they keep themselves confined to the high branches of towering trees, the animals are still not completely secure. 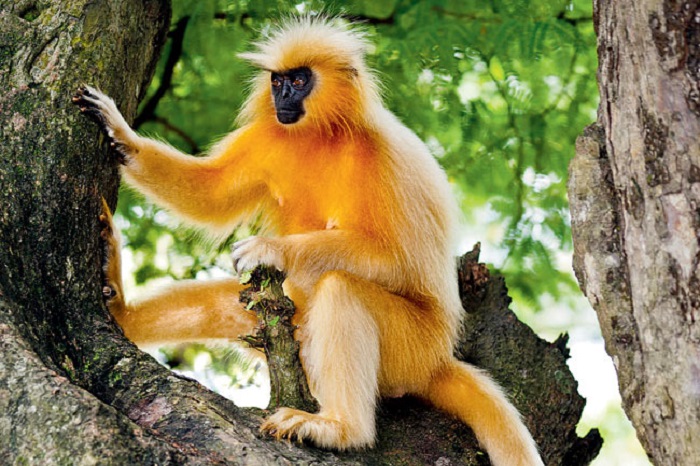 17. Snow Leopard
The Snow Leopard is one of the main attractions for tourists who explore wildlife in the Himalayas. The Hemis National Park situated in the northernmost state of Jammu & Kashmir, is an exclusive habitat for the Snow Leopard. A 2003 report suggests that around 4000 to 6000 of these cats were found in the whole Himalayan region, which includes places like Tibet, Nepal and even Siberia. This suggests that only a handful of these are now present in India, which has raised panic amongst wildlife enthusiasts. 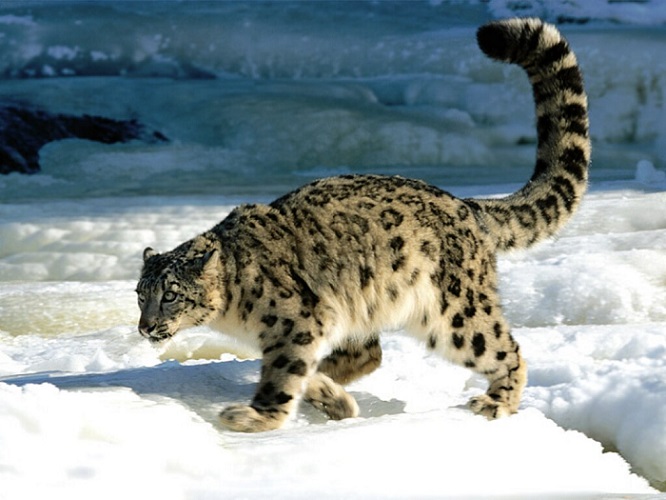 18. Dhole- The Asiatic Wild Dog
The Dhole or the Asiatic Wild Dog is found in many parts of India such as Arunachal Pradesh, Manipur, the Indo-Gangetic plains and even Karnataka. While many of these animals are being killed in their natural habitat by bigger predators like Tigers, others lose their lives to hunters as their skin is regarded as one of the warmest and sold for exorbitant prices in the market. 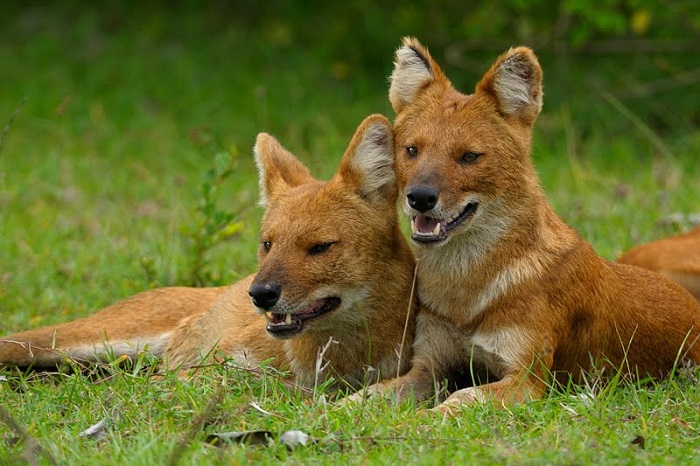 19. Nilgiri Thar
The Western Ghats region of hill stations like Munnar, is inhabited by the Nilgiri Tahr, a peculiar creature that resembles a goat and has golden colored eyes. Alarmingly, only 100 of them were found in the entire country during the early 2000s. A survey was conducted in 2014 in the Eravikulam national park, situated in the region and around 894 such goats were found, which has made their number quite stable. Yet, it’s a huge challenge for conservationists of South India to ensure the safety of these animals. 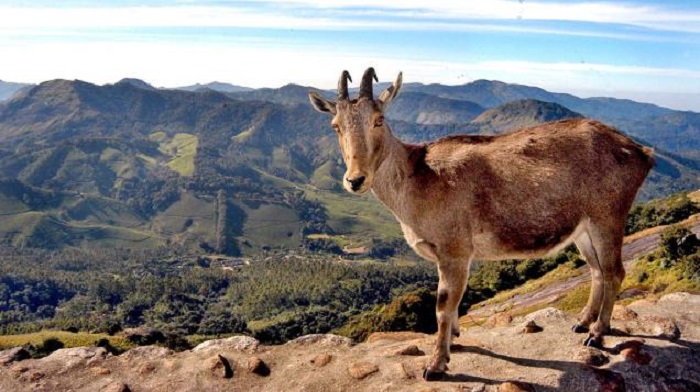 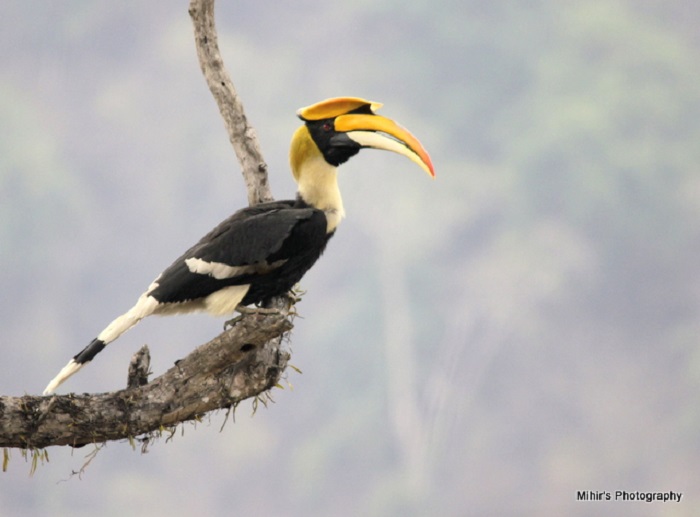