A view from an airplane traversing through the city of Mumbai and you will be able to easily spot the residence of the richest man in India. Mukesh Ambani is the Chairman and Largest stakeholder of the Reliance Industries, which was started by his father, Dhirubhai Ambani, in 1966. With a current net worth of $43 billion, Mukesh’s Ambani’s sole residence is located on Altamount road, which is the poshest street in Mumbai and one of the most expensive streets to live on across the globe. The plot by itself was a whopping $4 million and what he built on it became the most expensive residential house across the globe. He apparently has spent more than $1 billion in creating his dream house. From living in a two-bedroom house with his brother and uncle, Mukesh moved into what is now an architectural spectacle. Mukesh received a lot of flak from the locals for this ostentatious design, and the primary factors behind this being that it can be viewed from one of the largest slums in Asia. Some have praised this design while some have just criticized it for what it is and how it looks but these are 15 crazy facts about Mukesh Ambani’s Billion Dollar Home, the first billion dollar residential home in the world. An aerial view of this house will give anyone a clear picture of the difference between the rich and poor in India.

1. Unlike most Billionaires around the globe, Antilia is Mukesh’s sole residence. The residence was named after the phantom island apparently located on the Antarctic Ocean. The island was part of the great mysterious city of Atlantis. 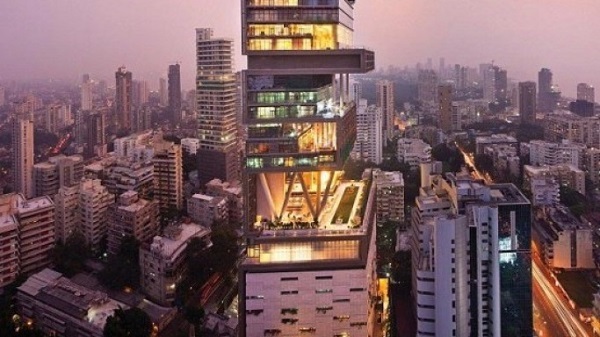 2. The property sits on one of the most expensive roads to live on across the globe, the Altamount Road, in South Mumbai. Properties across this stretch go up to a whopping $25,000 per-square-meter. This is not only the poshest road in India but one of the poshest across the globe. Most people have criticized this structure, because rumor had it that it was laid by the slums, but that is not the case, although the slums can be seen from this house at a far distance. 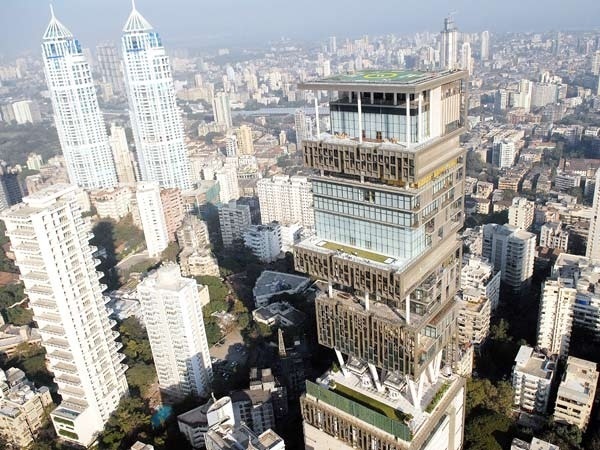 3. The house expands 400,000 square feet across all floors and though people assume that it is a 27-storey building, some floors stand two floors tall hence making this structure a little more than a 40-storey building. It also contains a four-story garden which has hanging hydroponic plants which absorb the sunlight and keep the interiors of the house cool. Considering this building is one of the highest buildings in the area, in a city which is hot as hell almost through the year, these plants serve as a necessity. 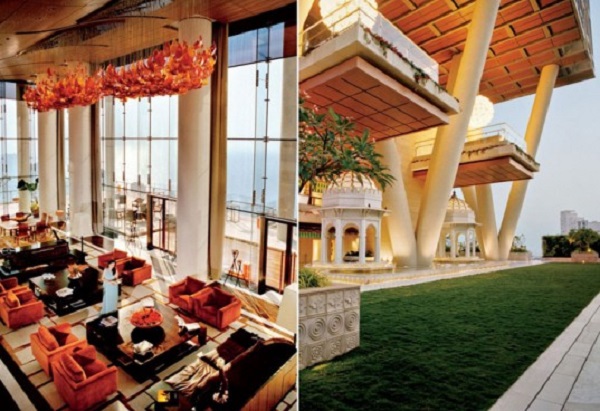 4. 600 people are working to maintain this lavish tower. Each member of the staff is treated equally and have their space to relax and recuperate. There are designated rooms for them to lay their legs back after a hard day’s work and get ready for the next day. Top class facilities are given to them too. Although they possess this massive staff to attend to all their whims and fancies, the children of Mukesh are ordered to be responsible and tidy their rooms themselves every day. 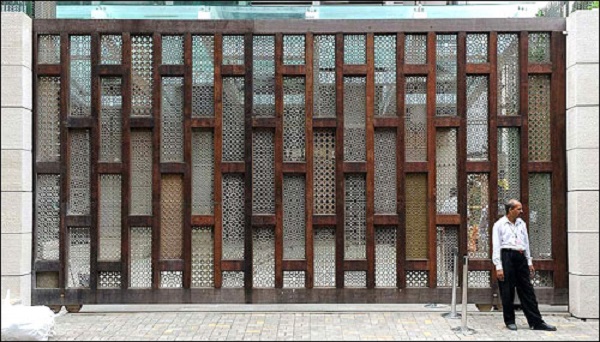 5. No floor is the same throughout this building and each floor is specifically designed to satisfy the wants of Mukesh and his wife. Although the architects maintained a level of consistency, no room in the house looks the same. Every material in every floor, from the wood, to the metal used for the frames, to the tiles and design of the rooms, everything is different, and no room feels like the other.
6. The car garage of the Ambani’s scales six floors. The 6-floor parking is big enough to accommodate 168-cars. The Ambani’s possess numerous high-end cars, from a Benz S-Class, to a Rolls Royce Phantom to a Bentley Flying Spur and a 5-crore Maybach. The parking drive goes all the way up to the seventh floor which is a car service center. Talk about having almost everything in one spot. 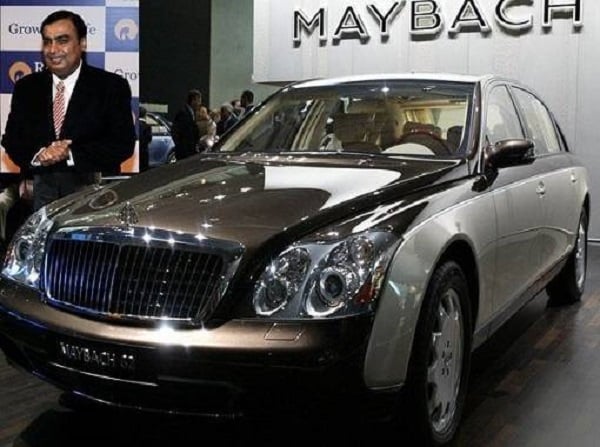 7. This lavish tower also consists of three helipads on the roof. There is a floor just blow it that is solely for air traffic control assisting his choppers. 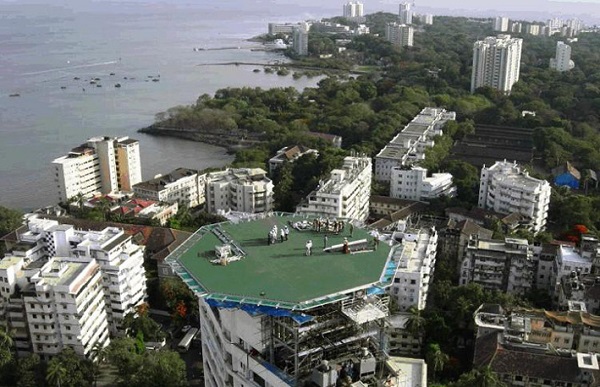 8. The house contains 9-super-fast elevators that are designated for the family and workers accordingly. Accessing any part of this humongous tower is no hassle because of these efficient elevators. 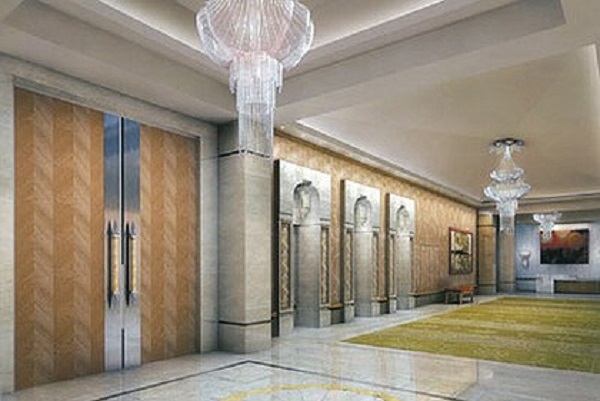 9. Antilia also has a ballroom, which is meant for private shows for the family and dignitaries in which the ceiling is covered by chandeliers. It also contains a theatre which seats 50 people and guests suites for those he invites to share these lighter moments with. These rooms are also used for corporate events held by Mukesh. 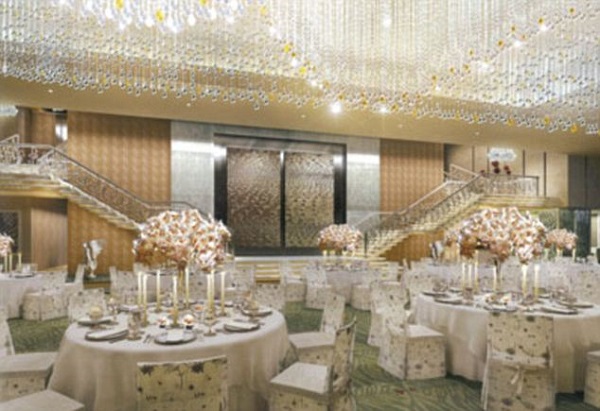 10. The top floors of this billion-dollar home are for the family. Mukesk, his wife Nita and three children, two boys and a girl, reside on these top four floors. The reason they chose the top floors was to get sunlight and the best possible view in the city of the Arabian ocean. This house is built following Vastu and the materials inside it are placed specifically as required to bring in the right energies. 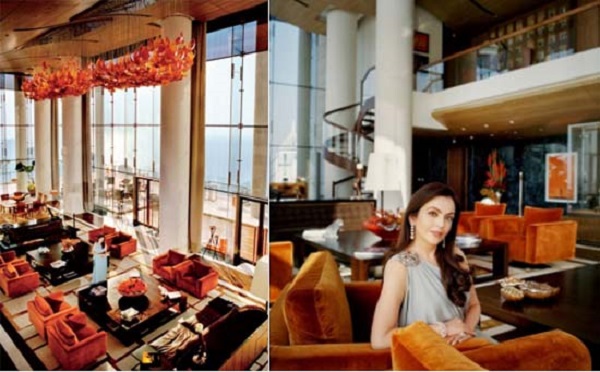 11. The weather in Mumbai is generally hot and humid throughout the year with temperatures soaring over 35 degree C during the summers and over 30 Degree C most parts of the year. The Ambani’s built their very own, ‘snow room’ to escape the scorching heat of the city. This room replicates cold winters, something that Mumbai will never experience. The room has man-made snow flakes spurted out 24/7 and every day of the week, whether someone is in it or not. It is their very own winter wonderland.
12. According to Nita Ambani, the concept behind this house is “The Sun and the Lotus.” This two design motif can be seen throughout the house and is made of rare woods, marble, crystals and pearls. 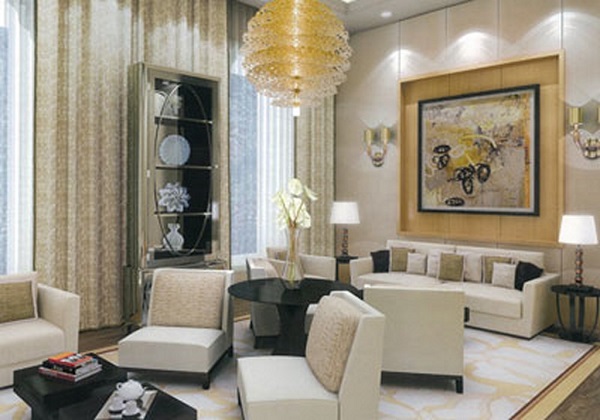 13. This most expensive residential home also contains a spa, a pool, a yoga spot, gym, dance studio and a temple that the family uses to pray.
14. When Nita Ambani was in a spa in New York that overlooks Central Park, she was struck by the intricate Asian design of the building. She then contacted the designers who were Chicago based architects Perkins and Will to design their dream home. The house was built by Australian based construction company called Leighton Holdings. The structure took four years to build. 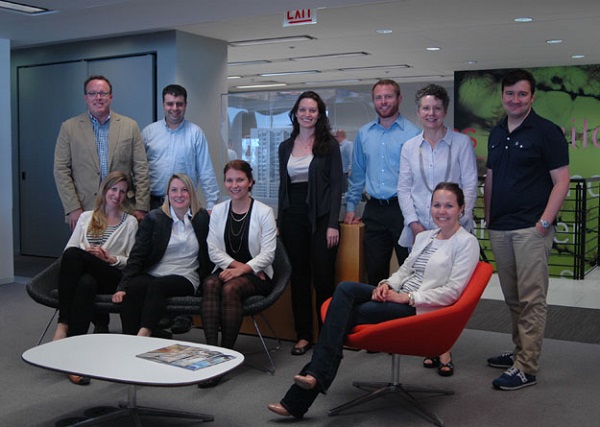 15. The house is designed to stand erect and survive even an 8-Richter scale earthquake. Hence this makes this site the costliest and safest spot across India. Period.