When it comes to good food, there is no shortage of eating joints that offer great quality as well as variety in India. However, too many restaurants offering the same kind of food and ambience have mushroomed over the years. Restaurant owners are now resorting to new methods to make their ventures stand out from the rest, thus paving way for funky themed dining options. More than just being a place that satisfies the hunger of a foodie, the ambience of these restaurants also makes a psychological impact on its guests. For instance, sports themed restaurants have become a hub for lovers of games like Football and Cricket to socialize and watch international matches together. Although you might have tried different cuisines in your city, these are few unique places which you will want to visit. Here are 16 restaurants from different parts of India which have become trendsetters, thanks to their unique theme. 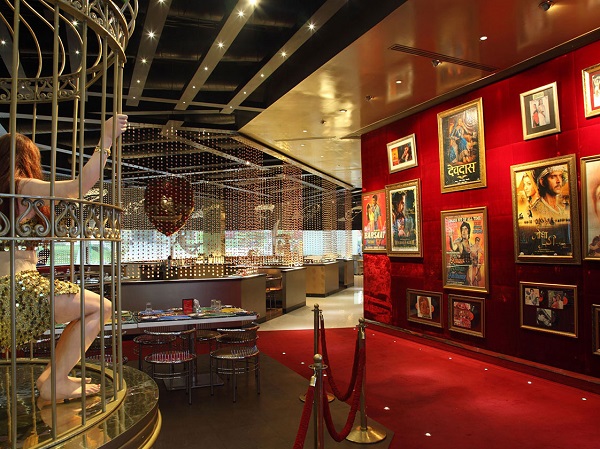 Bollywood is undoubtedly India’s pride as well as being one of the biggest obsessions amongst the youth of the nation. If you are a foodie who just can’t stop munching and is also a big fan of musical and melodrama flicks, ‘70mm,’ located in Hyderabad, is a must visit. From ‘Mother India,’ to ‘Dilwale Dulhaniya Le Jayenge’ and ‘Kabhi Khushi Kabhi Gham,’ all the iconic posters of the gems of Indian cinema have been immortalized on the walls of this restaurant. In addition, famous Hindi movies are also screened on the giant LCD screens of this restaurant. Could you think of anything better than relishing continental and Indian delicacies, in the company of your movie stars? 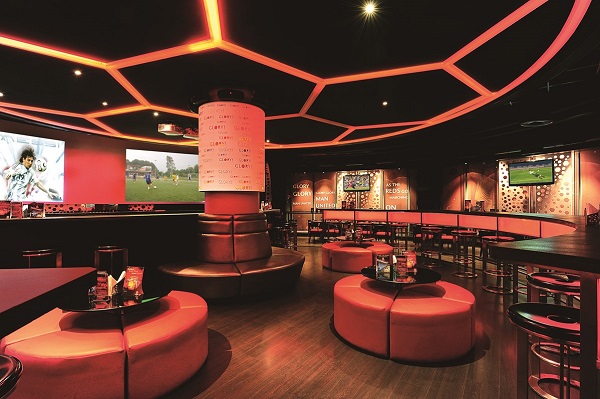 Football frenzy has taken India by storm over the past few years and the various international football clubs have earned a massive fan following in the country. The Manchester United pub, located in Mumbai has got many lovers of the sport basking in the happiness of a dining place named after one of their favorite football teams. The restaurant offers varieties of cocktails as well as an ambience filled with interesting facts about Manchester United which you probably didn’t know. Watching an English Premier League game between Manchester United and arch rivals Arsenal at this cafe is just an electrifying experience. A flood of red on game night is what you can expect week after week. 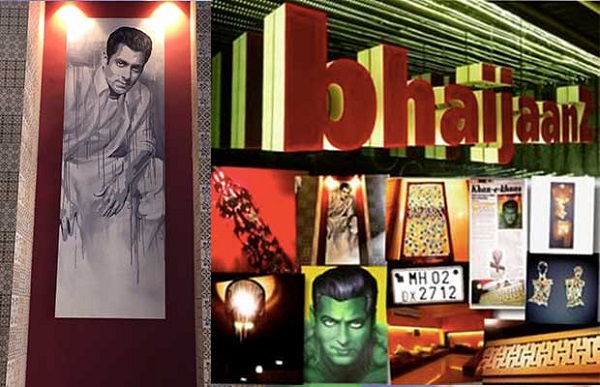 If you are a hardcore fan of Salman Khan, this restaurant in Mumbai is just for you. A look at the interiors of this restaurant speaks volumes about the accomplishments of the muscle man from Bollywood. The posters of each of the movies the actor has starred in, till date, have found a place in this restaurant. The music played at this restaurant, is mainly melodies and hit numbers from Salman’s films. The interesting part is that even the names of the dishes, such as ‘Anda Apna Apna,’ have been derived from the actor’s flicks. Get a feel of ‘Being Human’ at this superstar’s cave. 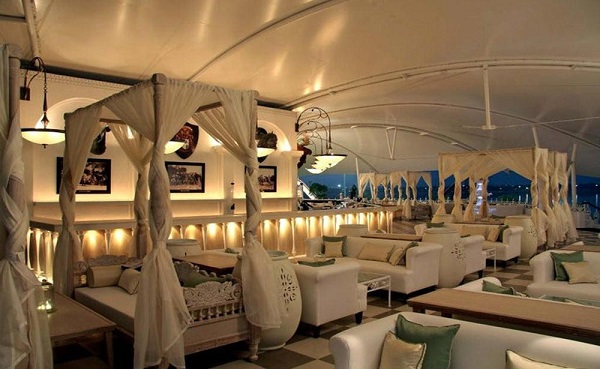 Even today, Hyderabad is remembered by many Indians for once being a princely state and the home to the Nizam, a great ruler of the region during the British era. The restaurant ‘1857,’ situated on Necklace road, Hyderabad, will make you travel back in time and give you a glimpse of the bygone era. 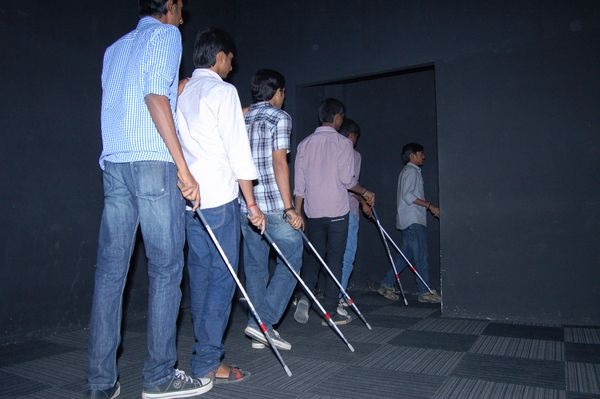 Candle light dinners and warm-lit ambience is turning into a cliché, perhaps this is why the owners of ‘Taste of Darkness’ introduced this unique idea. At the entrance of the restaurant, cellphones and every other accessory in your pocket that emits light is confiscated. WHAT?? Yes, you heard that right. A guide then takes you inside this unusual place, for which you also require walking sticks. You then order your food and even taste it in the company of 50 others in complete darkness. Spooky isn’t it? But you can be rest assured that nothing will distract you from their mouth-watering treats. 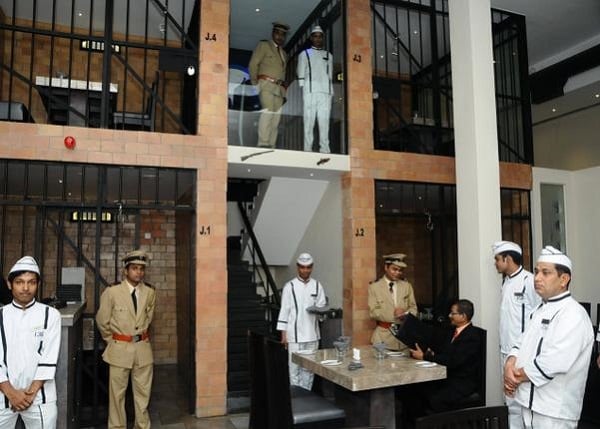 Even the very thought of being caged behind bars would send shivers up the spine of any person. However, here’s a restaurant which looks exactly like a prison (don’t be surprised if you start thinking it is actually a real one). A cell is allotted to each group of guests and one even gets to try the famous ‘Kaidi’ (prisoner’s attire) which is a white Kurta-Pajama pair with black stripes. The food is served by waiters dressed like Police officers. The restaurant serves Mexican, Thai as well as North Indian delicacies. God help you if you try to run for it without paying the bill… 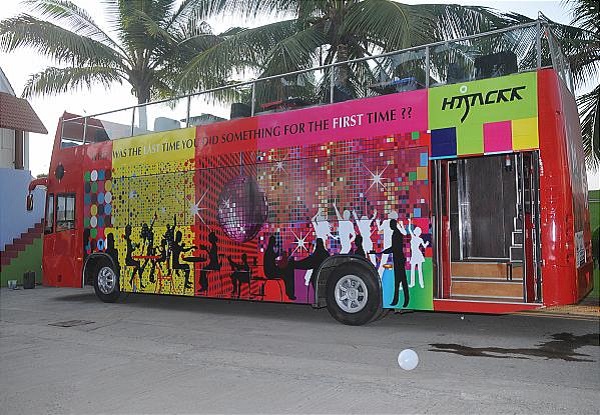 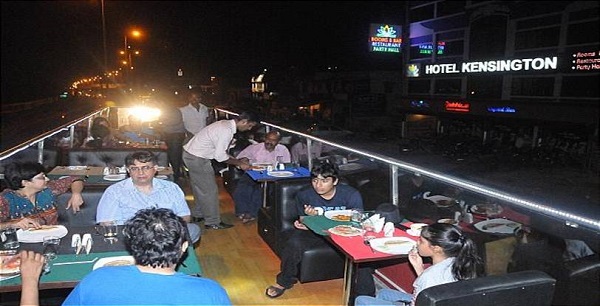 Food on wheels would be the most apt way of describing this unique restaurant located in the city of Ahmedabad, in Gujarat. The restaurant is nothing but a double-decker bus, where the passengers are not only served food but also taken on a sight-seeing trip around Ahmedabad. This mobile restaurant serves exquisite Indian as well as Chinese vegetarian delicacies. Hijackk’s popularity is growing by leaps and bounds each day and the restaurant is also spreading its tentacles to other major Indian cities.

Living up to the meaning of its name, ‘Gufha’ is a restaurant which is more or less a cave. Located right in the heart of Bengaluru, this restaurant makes one feel that he/she has travelled miles away from the city and is deep inside the underworld. This cave-themed restaurant offers authentic Afghani and Indian food and is reasonably priced, saving you from burning a hole in your pocket. Even the dressing style of the restaurant staff is sure to grab your attention. 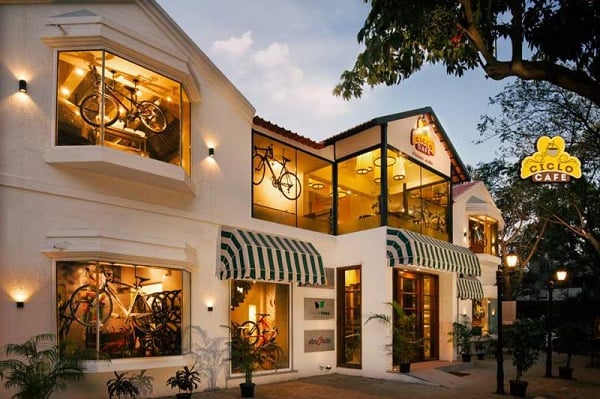 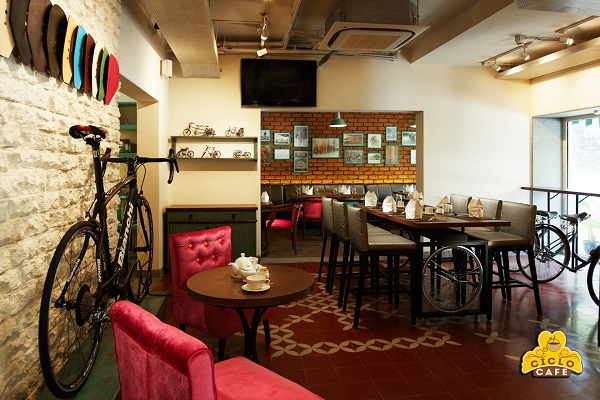 An evening you spend at the ‘Ciclo Café,’ located in Chennai, is sure to turn into a journey down memory lane. The café reminds us of one of our once most prized possessions- the bicycles, which we ditched for the funky bikes and luxurious cars. Every property at this place, be it the tables, or the chandelier, is made up of bicycle parts. In addition, cycles of different brands belonging to different time periods are also exhibited, making you feel like buying one instantly and going “Going Green.” 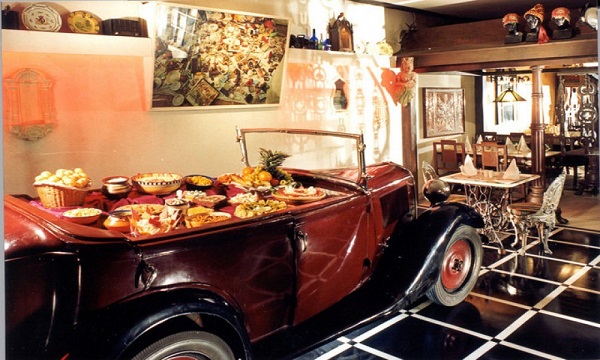 The ‘Chor Bazaar’ or the ‘Market of Thieves’ is quite a famous concept across India. Banking on the popularity of the ‘Market of Thieves’ concept, this restaurant in the national capital, New Delhi, has even designed its ambience to make it look like one. A vintage car and loads of priceless collectibles from history, add to the charm of this restaurant’s ambience. Chor Bizarre is famous among Delhi residents for its authentic Kashmiri food, especially the ‘Aloo Bukhara.’ 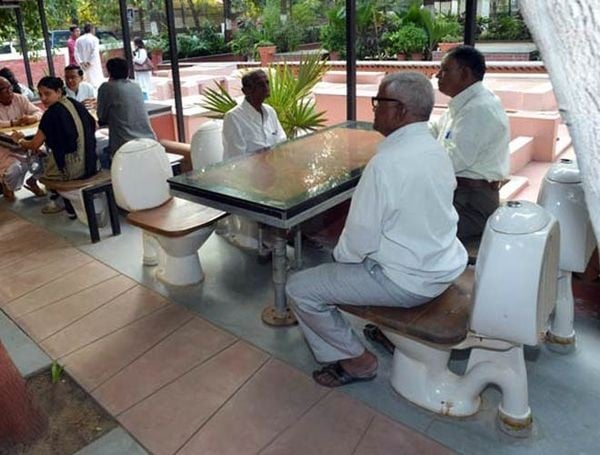 Of course, every restaurant has a restroom, but imagine munching food by sitting on a toilet seat? Like many restaurants, this one too boasts off a garden, the difference is that even this space consists of lavatories. However, not many people think this concept is ridiculous and flock the cafe very often. This is sure to get your bowels moving. 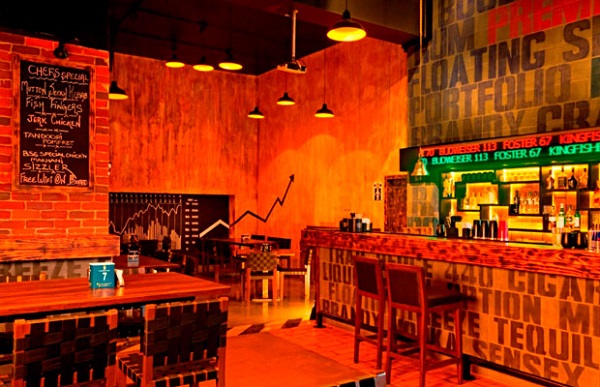 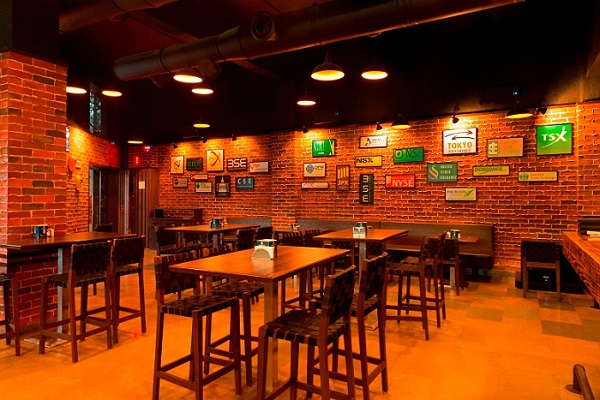 Unlike most restaurants and bars, the prices of beverages at this place rise and crash just like the stock market. The interesting part of this warmly lit place located in Mumbai, is that the drinks cost cheaper when the bar opens and the prices start peaking after a while. A drink may even become dirt cheap or super expensive depending on the increasing or falling demand for it. 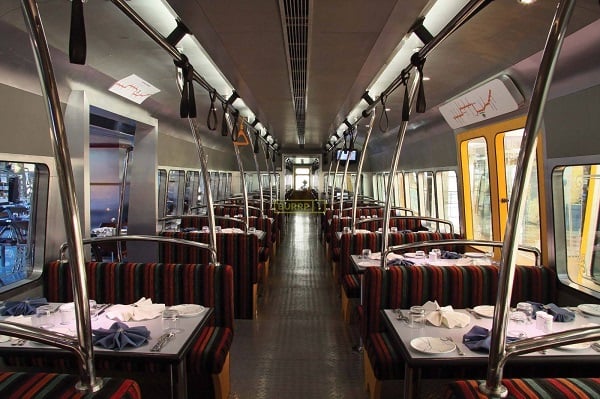 You have travelled in metro trains, but have you dined in one? This unusual dining spot in Bengaluru looks exactly like the interiors of a train and its walls are painted silver, hence the name. The Silver Metro is also quite reasonable and is a good option to be considered for lunch. 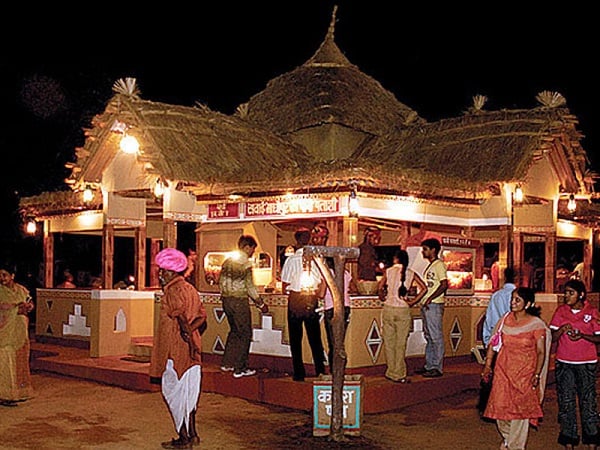 The ‘Chokhi Dhaani’ restaurant, which first started inside a resort in Jaipur, offers its guests a slice of Rajasthan’s rich culture. The menu offers a wide variety of savories and mouth-watering regional delicacies from Rajasthan. However, it’s not just food that this fine restaurant offers to its customers. Guests at Chokhi Dhaani are also entertained by renowned folk dance forms from the region, like the ‘Bhopa Bhopan’ and ‘Kalbeliya.’ One can also get an insight of Rajasthan’s glorious past, which is described through the traditional puppet show, also known as ‘Kathputli Ro Nach’. 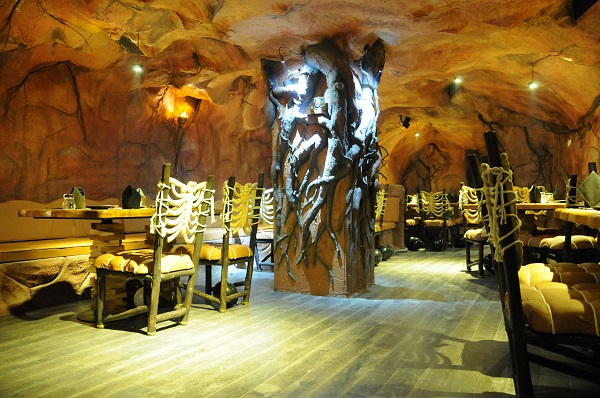 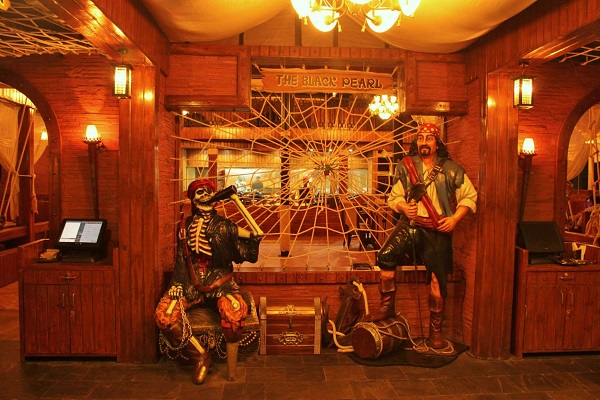 If you are fascinated by the lifestyle of Pirates and Captain Jack Sparrow from the famous fantasy franchise ‘Pirates of the Caribbean,’ you can’t afford to miss this one. The wooden floors that resemble the deck of a ship, the chairs draped with ropes, the sight of skulls and mannequins of pirates with eye patches, ‘The Black Pearl’ has everything to give you a sense of actually sitting on a pirate ship and for a minute you might even feel that you’ve been held captive in one. What could be more exciting than feasting on continental and Caribbean cuisine on a pirate-themed restaurant, for a fan of the blockbuster movie franchise? 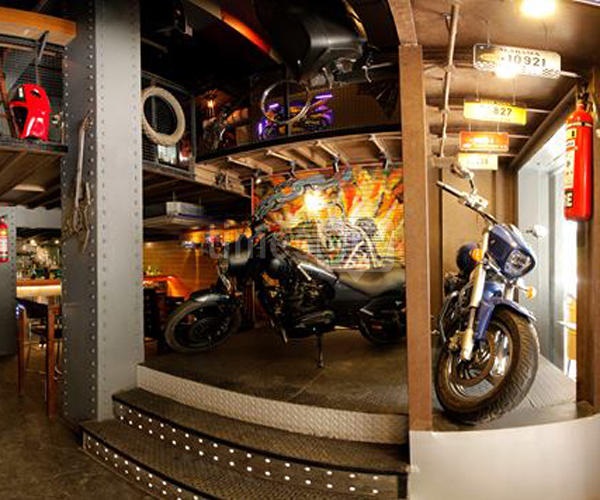 Here’s one eating place that boasts of machismo and is dedicated exclusively to the bikers. Not just the incredible graffiti on its walls, but also the heavy mean machines and the thick leather jackets on display at this café are sure to leave you gratified. The popularity of the restaurant has also provoked its management to open branches in other Indian cities as well. Burning rubber is their heart’s desire.