25 Hot Bollywood Actresses With & Without Make Up!!

These divas have turned into heartthrobs and have been ruling the silver screen with their glamor quotient as well as talent for several years now. Their beauty has inspired many youngsters from the country to become more conscious about their looks and having said that many fail to realize the role of cosmetics in enhancing the glamor quotient of these famous women from tinsel town by passing off their looks as ‘natural beauty’. Expensive hair products, creams and surgeries that cost a bomb are ways that many actresses resort to, in a bid to retain their beauty and bag more roles in movies. Here are 25 renowned actresses from the world of Bollywood and the difference in their appearances in front of the cameras and off it. The pictures of these popular celebrities might be eye popping and might take you by surprise.

1. Priyanka Chopra
This former miss world and renowned Bollywood actress isn’t at her glamorous best without make up and seems more like a face you might have spotted at your neighborhood, bus station or a coffee shop. 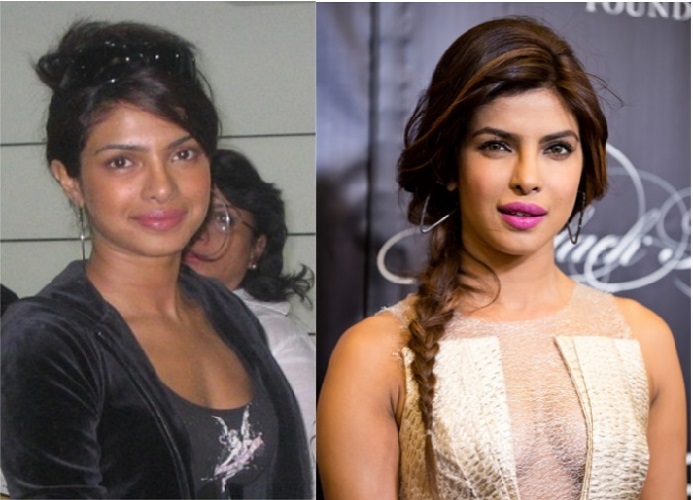 2. Vidya Balan
Known for portraying strong female characters onscreen, Vidya who is usually draped in saris at public gatherings mesmerizes everyone with her charm. However, her appearance off-screen might take you totally by surprise. The actress is much duskier than she seems to be on the silver screen and her television interviews. 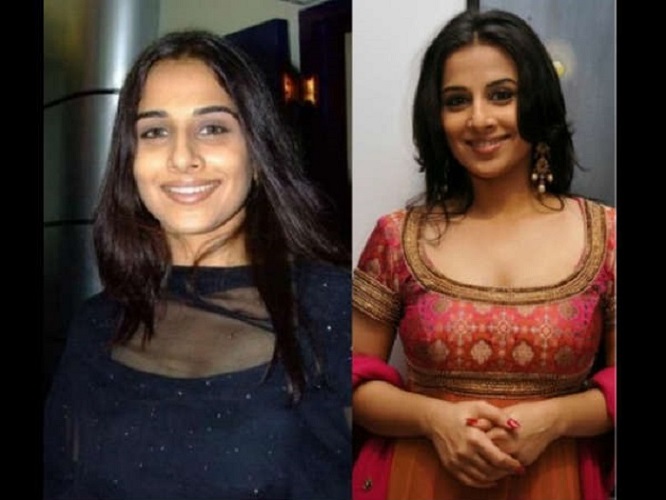 3. Deepika Padukone
The former supermodel, who is also one of the most sought after actresses in B town today has left millions smitten by her beauty and dimpled smile. The actress was once photographed during the pilgrimage and the pictures which surfaced on the internet left many stumped. The actress was poles apart from her glamorous avatar in the movies. 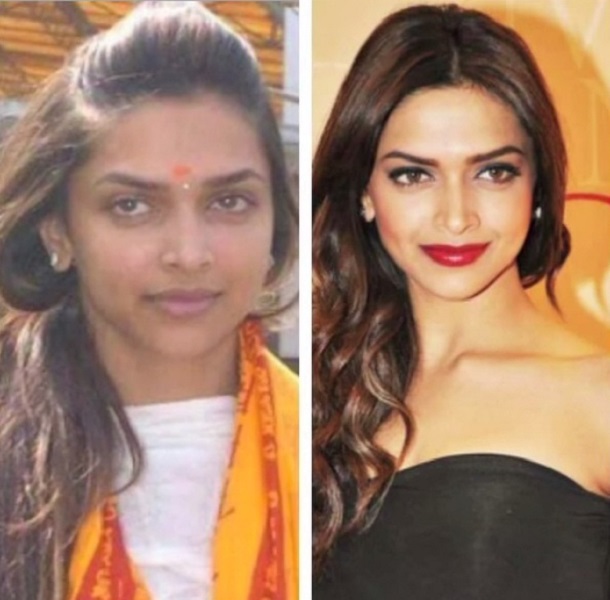 4. Rani Mukherji
It was really shocking for many admirers of acclaimed actress Rani Mukherji to digest this truth associated with the actress. The shutterbugs captured the actress at a social event with bold dark circle patches near the eyes. 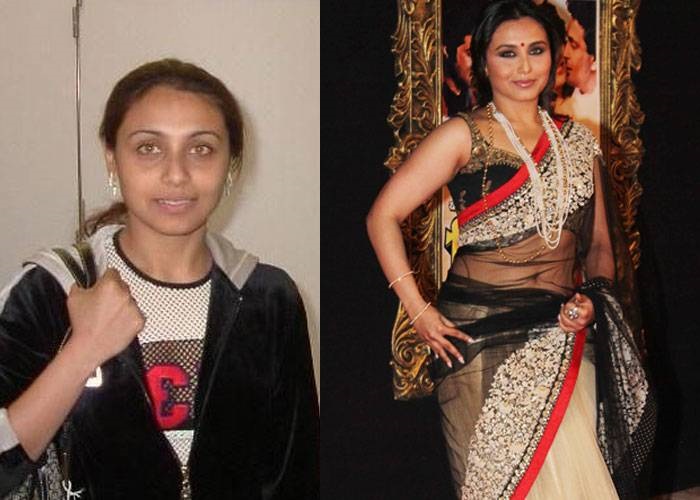 5. Kareena Kapoor
The diva from the Kapoor clan, who has been ruling the roost in Bollywood over fifteen years now, was found to be pretty by many even sans make up. A less glamorous Kareena was spotted several times at places such as the airport and private events. 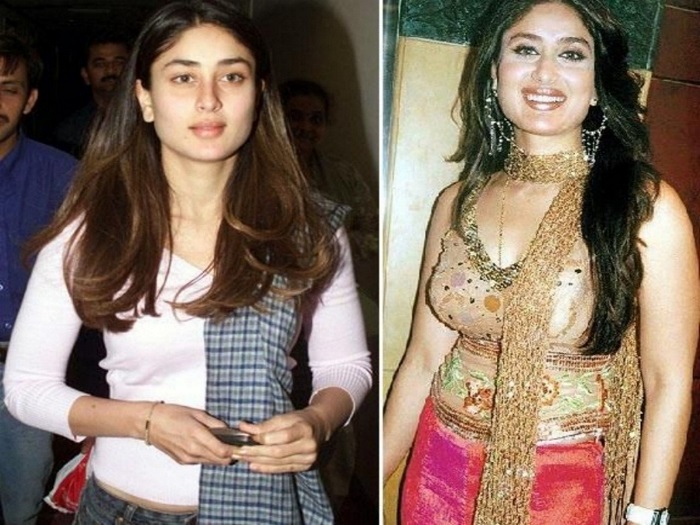 6. Nargis Fakhri
It seems like the sensuous Nargis Fakhri can manage to stay pretty even without the help of her make up kit. The actress, who shot to fame through the Ranbir Kapoor starrer ‘Rockstar’, was captured by the cameras at a public place, sporting a geeky look, which is far too different from her on-screen appearances so far. 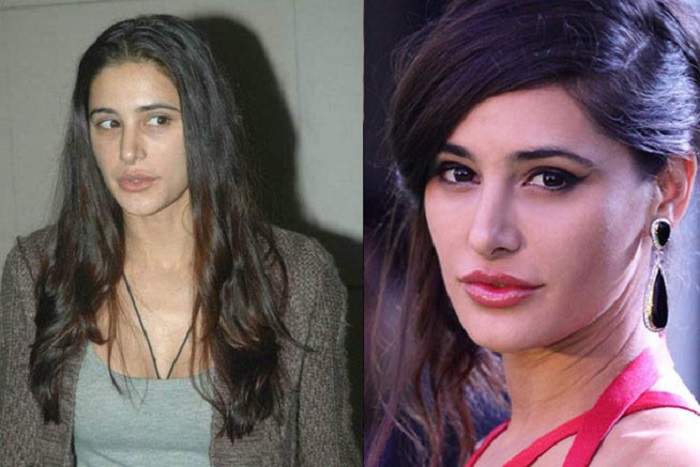 7. Katrina Kaif
Touted as the undisputed queen of Bollywood, Katrina didn’t look drastically different from the way she looks onscreen. Katrina has been frequently seen by many, especially at the airport, returning from her vacations, without a pinch of glamor on her face. 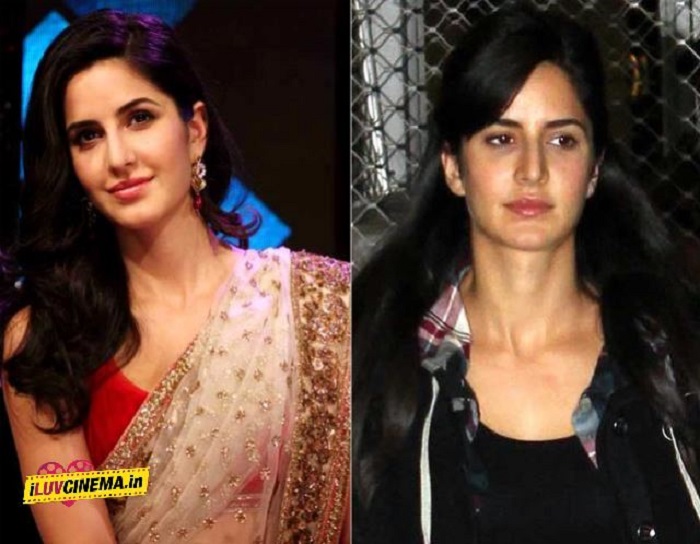 8. Alia Bhatt
The bubbly ‘Student of The Year’ actress looked quite plain, when captured by the paparazzi at a social gathering. Her cheeks were devoid of any gloss, unlike the way she’s spotted on screen. 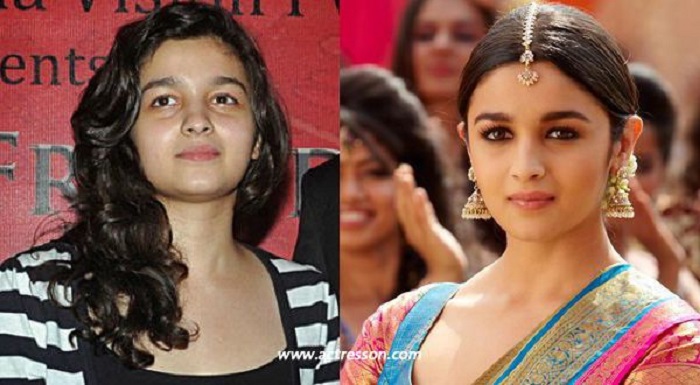 9. Parineeti Chopra
The bubbly Chopra had mentioned in one of her interviews that she’s not obsessed with makeup and doesn’t advocate too much use of cosmetics either. While photographed without make up, Parineeti looked like the typical girl next door. 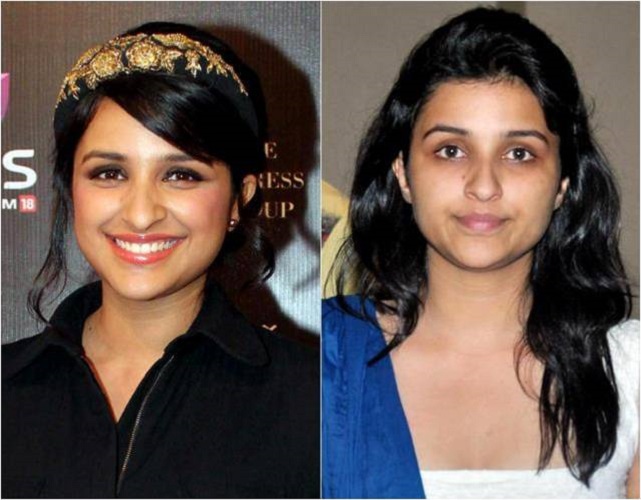 10. Aishwarya Rai
The gorgeous, blue eyed Aiswarya Rai’s de-glam look at pilgrimage places and prayer meetings wasn’t too shocking for her fans. The beauty, who has visited the Siddhivinayak Mandir in Mumbai on quite a few occasions, managed to leave her fans floored without the cosmetic mask. 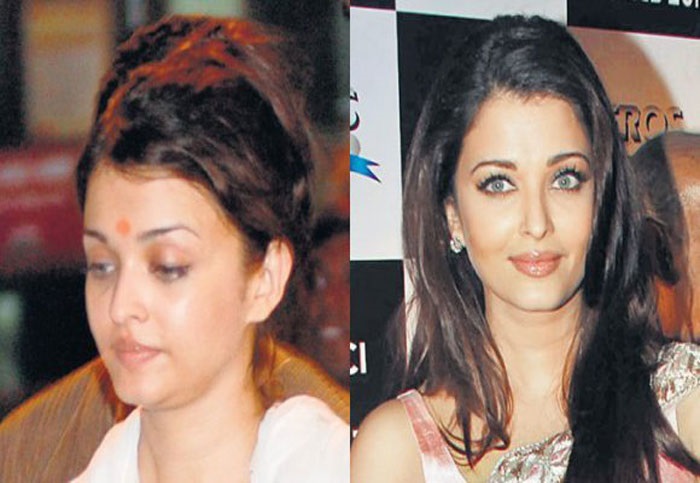 11. Kajol
The ‘Dilwale Dulhaniya Le Jayenge’ actress, who is considered one of the most iconic performers of all time, was also spotted without any make up. Clad in a white Salwar Kameez, the dark circles under her eyes and spots on Kajol’s face were quite evident when she was photographed by the lenses. 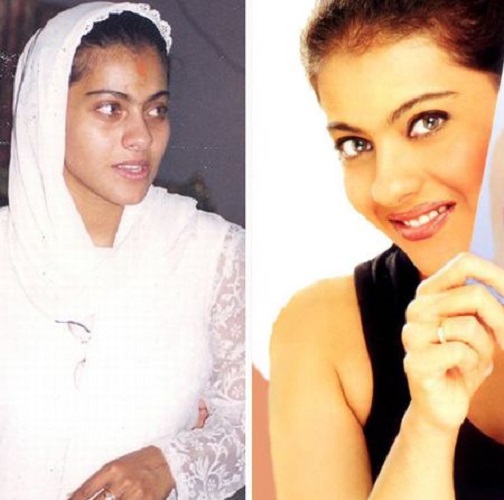 12. Bipasha Basu
The dusky Bong beauty and one of the most successful female models of all time looks poles apart from her onscreen persona. Bipasha was seen in a track suit and a sweat shirt by sections of the media and the difference between her reel and real looks raised quite a few eyebrows. 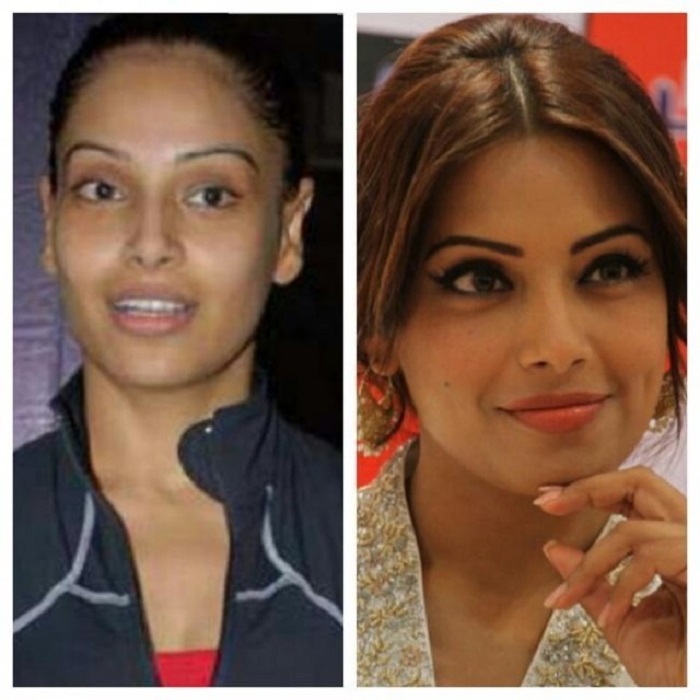 13. Kajal Agarwal
Kajal, who made Bollywood stand up and notice her performance in the Ajay Devgan starrer ‘Singham’, was at a café at the airport when this photograph was taken. Well, considering her onscreen appearance, Kajal’s de-glam look was quite a topic of discussion on social networking platforms. 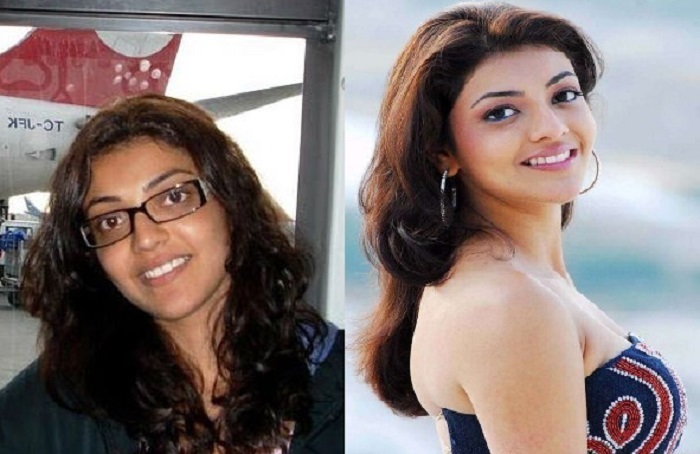 14. Rekha
Rekha who is hailed as the evergreen beauty and manages to steal hearts at a ripe age of sixty, couldn’t escape the wrinkles, which are usually hidden by the cosmetics. The actress was spotted in a car without make up and signs of old age were quite evident. 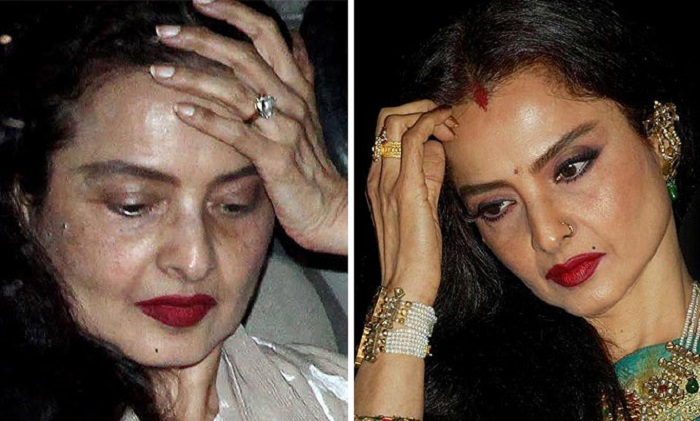 15. Celina Jaitley
The bombshell who sets hearts pumping with her fabulous looks and looks almost flawless onscreen, doesn’t seem all that perfect without any gloss. 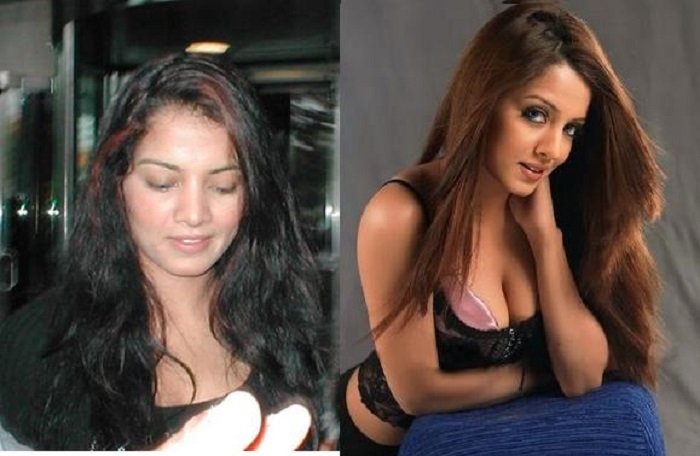 16. Karisma Kapoor
The Kapoor girl, who was a heartthrob, especially during the 90’s is quite plain when not in front of the camera. Karisma was spotted pampering her little girl when this picture was taken and her appearance took many online users by surprise. 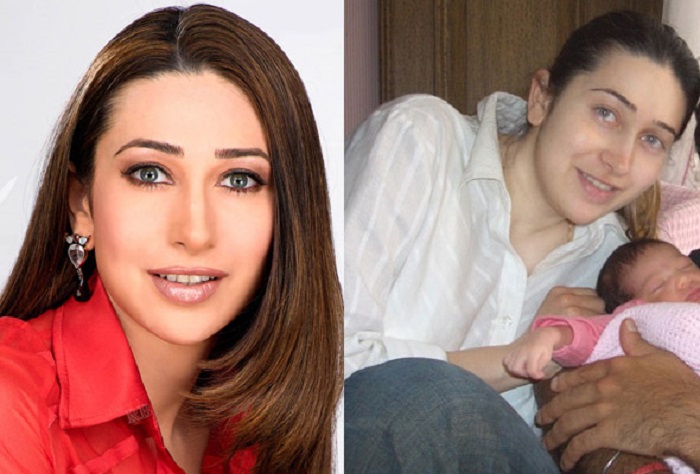 17. Sonam Kapoor
Known for being the current crusader of fashion in the world of Bollywood, the way Sonam carries herself off-screen is not anything close to the way the actress looks in front of the camera. While not shooting, Sonam hardly uses cosmetics to light up her face and is also seen sporting glasses. 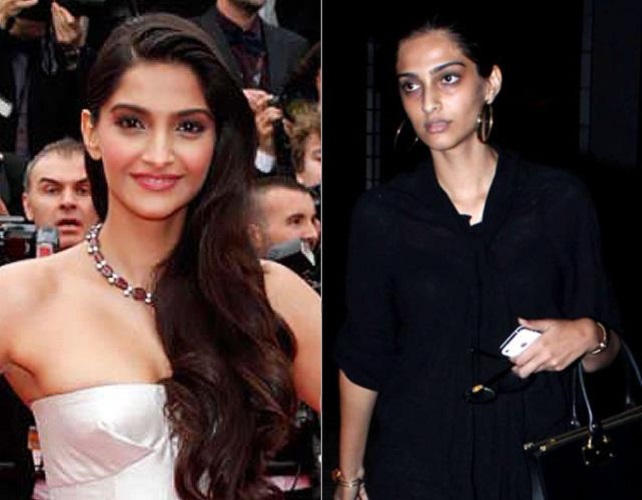 18. Shilpa Shetty
This picture of the glamorous Shilpa Shetty, taken ages ago might be hard to digest for those who are smitten by the charm of the Bollywood hottie. It is astonishing to see how tremendously Shilpa has transformed over the years. 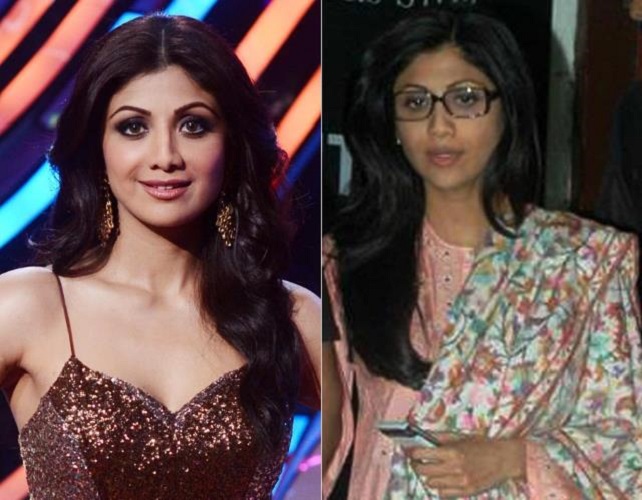 19. Kangana Ranaut
The actress who has been basking in the glory of her back to back successes, such as ‘Queen’ and ‘Tanu Weds Manu Returns’, seemed rather simple when her admirers got a glimpse of her without make up. 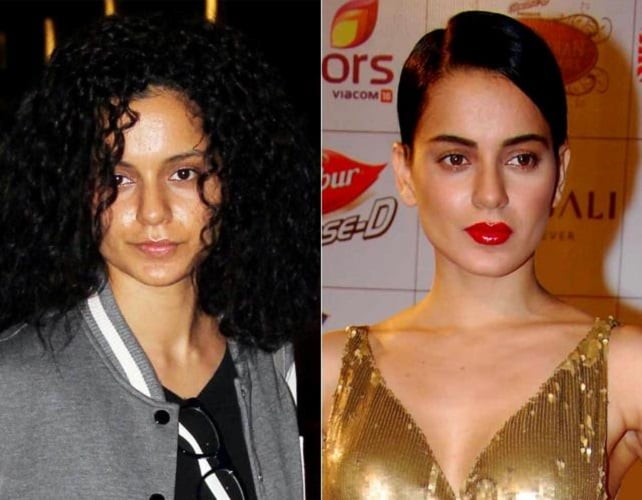 20. Mugdha Godse
This hottie has earned scores of admirers through her hot bikini photo shoots and other glamorous appearance for several magazines. However, while she is away from the camera Mugdha is no different from the average dusky women one encounters in India. 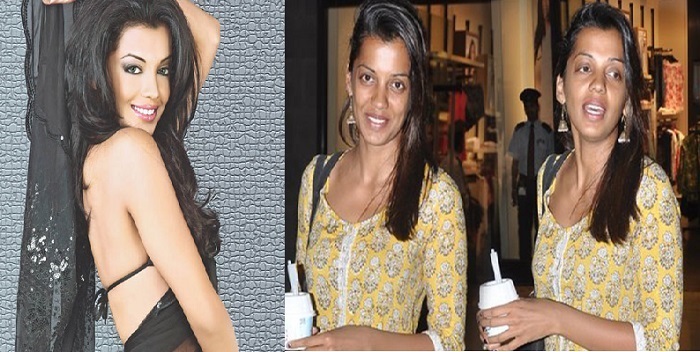 21. Rakhi Sawant
The official drama queen of Bollywood’s real face which is almost always hidden behind a mask named make up is quite a show stopper, if you know what we mean. 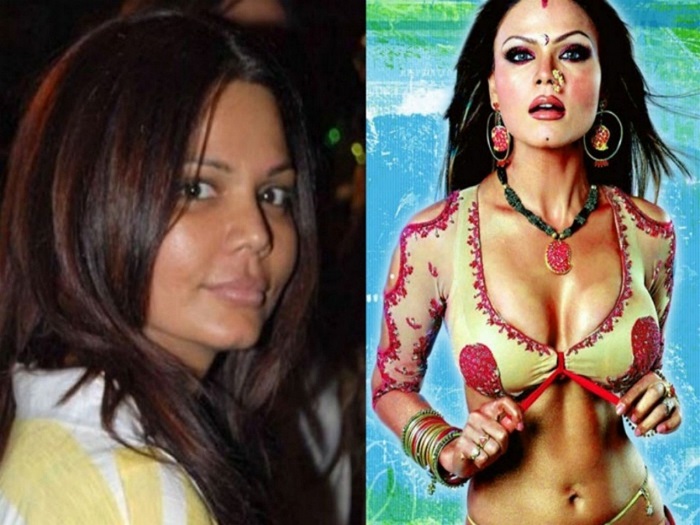 22. Tabu
Being de-glam isn’t something new to the seasoned actor Tabu and she has appeared several times in public without make up. Baring a few spots on the cheeks, Tabu’s natural look didn’t come as a shocker. 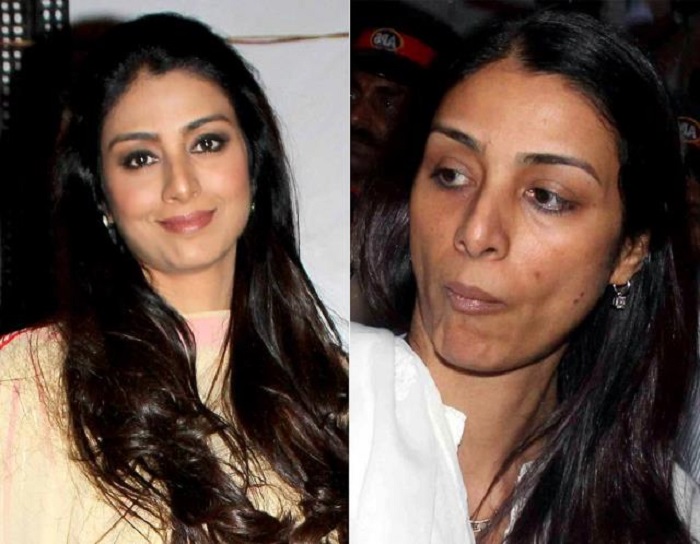 23. Amisha Patel
This is how the ‘Kaho Naa Pyaar Hai’ actress, who is a regular at page 3 parties and other social gatherings these days, was spotted at an event. 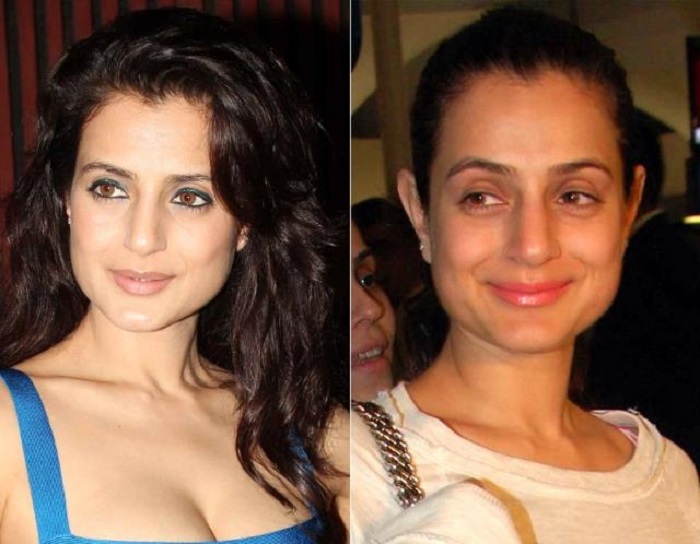 24. Sonakshi Sinha
Sonakshi Sinha, who is seen draped in ethnic wear in most of her films, prefers sporting big glasses, tees and flip flops and doesn’t really seem to give a damn about who thinks what about her off-screen appearance. 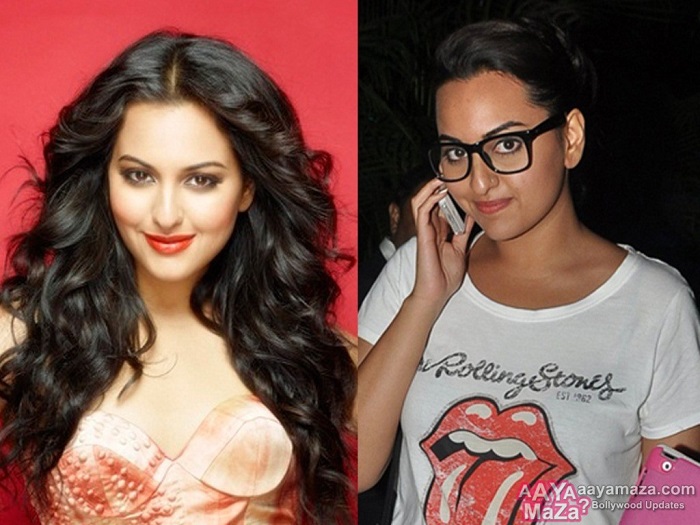 25. Amrita Arora
Amrita Arora, who is known for her steamy item numbers, seems to be rather incomplete without those patches of cosmetics on her face. 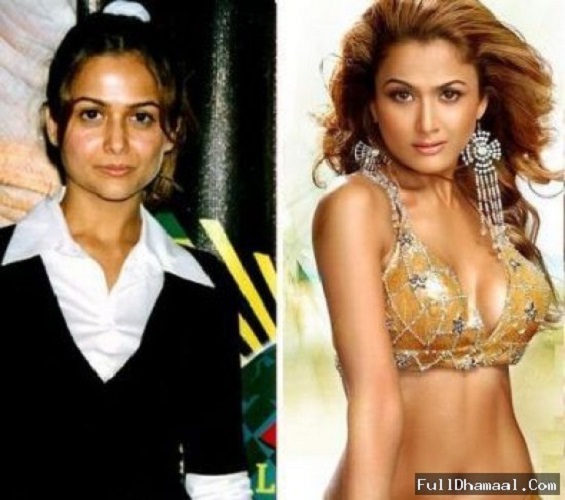