Quikr’s Product Idea:
Buying and selling of goods and services has always been commonplace across the globe, or rather a way of life. Coming to think of it, the earlier times made life extremely challenging for the parties involved in trading. However, the process of evolution does play its part in every field and somewhere along the way the remedy to such problems brimmed in the minds of those looking for easier solutions – Innovators and entrepreneurs.
Pranay Chulet and Jiby Thomas are two such entrepreneurs who engendered the idea of a single platform thereby making buying and selling incredibly effortless. As a result, Quikr was born and soon became India’s largest platform for buying and selling of used items- the one-stop shop for all your requirements. Needless to say, it’s a free classified website catering to all kinds of buyers and sellers across a local community in a city.

With Quikr you may simply post your requirements and you would be offered with a wide range of choices to select, covering a gamut of product categories like Electronics & Technology, Home and Lifestyle, Real estate, Cars and bikes, Jobs, Services, Entertainment, Pet Care, Events, Matrimony, etc. Interestingly, Quikr is the only player in India that has 10 million visitors a month. 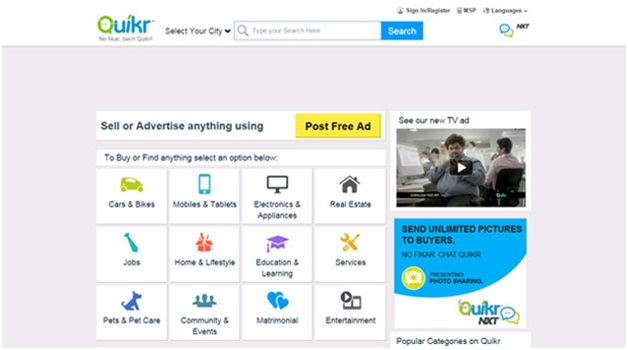 Their Vision That Took Them To The Road To Success!!
Fundamentally, the idea behind this business originated from field which absolutely had no relevance. While working in the United States, Pranay was fortunate enough to see the ascension of Digital Media from its nascent stage, that too at all levels, be it as an advisor to big media firms and as an entrepreneur. The greatest accomplishment in the field of Digital media was the formation of Craigslist, California based Media Company, which very soon became a roaring success in the United States. That’s when the idea of Quikr sparked.
Quikr’s goal is to help our community of buyers and sellers address their needs in the simplest and fastest way. Quikr has already made a mark in over 1000 cities and their relentless endeavors continue to expand their rather convenient embrace over others. Now, having a value of $1 billion, Quikr’s CEO Pranay comments, “By God’s grace we have enough money in the kitty now. We are very focused on building our verticals.”

The Hands In The Making Of Quikr!
The success behind Quikr is its Founder and CEO, Pranay Chuliat who completed his schooling from Kendriya Vidyalaya in Dariba, Rajasthan. He was the first from his school to appear for IIT Entrance Examination. He then got selected in IIT Delhi where he studied chemical engineering. After that, he graduated as an MBA professional from IIM Kolkata. Eventually, he ended up spending a decade in the United States where he worked as a Management Consultant in a media firm. And that’s where he was inspired by Craigslist, California-based classified advertising site which inspired the creation of Quikr.
Founded in 2008, Quikr was formerly named as Kijiji India Pvt. Ltd.
Lately, the classified portal Quikr has moved its headquarters from Mumbai to Bangalore so as to expand their technology team. 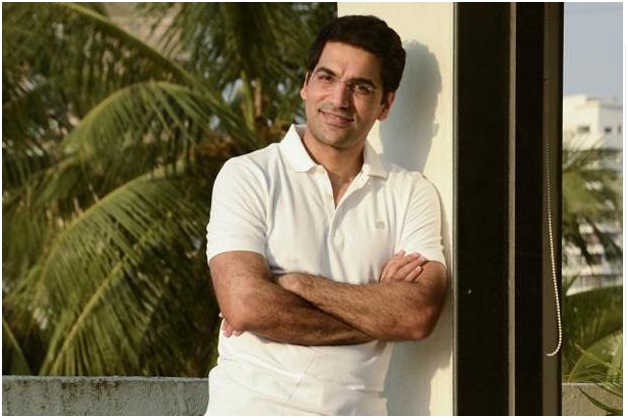 Business Model That Sets It Apart…
For the common man, the very idea behind Quikr, its competitor OLX, and so on, seems almost charitable. Most customer buyer and sellers log in and get their products bought or sold – all for free. Getting to the point, how does Quikr’s worth nudge towards a 1500-crore value?
Quikr generates revenue is several different ways: The first being AdSense (Pay per click revenue by advertisers, those who have been listed on their page. The second is lead generations from small businesses. The site enlists prospective sellers in certain categories that connect them with an audience interested in that particular field, working two-fold, first getting them exposure for buying or selling a product and secondly spreading their brand over a mass. The third method known as “Highlighted Listings” which deals with the promotion of a post, a traditional classified method of generating revenue. The premium packs in this category is the most sought-after for agencies and small businesses.
Apart from this, Quikr has adopted both, the B2B (Business to business) and the C2C (Customer to customer) models, inevitably increasing their pliability and consumer interest. As a result of efficiently embedding all these modules into one structure, Quikr has increased its revenue three to four times in the last few months as a result their profit margins are scaling between 50 to 70 percent.

Who Invested In Quikr?
In what largest round of funding for an internet services company in India, Quikr raised $90 million by Swedish investment firm Investment Kinnevik in two rounds in 2014. Their then deal with investor Warburg Pincus brought their estimated value over $250 million. Four months later, investors New York based Investment Company, Tiger Global Management along with existing investors Matrix Partners India, Omidyar Network, Norwest Venture Partners, Nokia Growth Partners, Warburg Pincus and eBay. Inc. added to the tally, raking in a total of 840-crores from seven rounds of funding. Raising a total of approximately over $350-million, Quikr at present is the highest funded internet firm till date, making its value stand at a grand $1-billion.

The Chief Barriers To Entry
Not wrong to say, India’s own Craigslist, Quikr has always maintained its quality through every stage of its development. Having a humongous number of visitors every month, Quikr undertakes vigorous effort to sustain the quality of their ads. Therefore the highest number of buyers and sellers is the chief criteria at the moment. Both factors are directly proportional to each other- the more the number of sellers, the more the number of buyers, and this keeps expanding the seller and buyer pool, a necessity and challenge.
Secondly, with the expansion of businesses and the number of users, the perpetual improvisation of the user experience becomes not only necessary but obligatory. So in the process of imparting innovative solutions to improve user experience, it throws the challenge of retaining the simplicity of the site without compromising on the same.
Lastly, India is dense in population and there are people who are not yet using digital classifieds today. Therefore in an attempt to diversify and expand the market, it is definitely a challenging task to reach out to such people who are oblivious to digital classifieds and prove to them the efficacy of this platform.

Company’s Secret Sauce!!
The features like MSP (Maximum Selling Point) or it’s missed call service provides for a convenient platform for its users thereby promoting customer retention.
Also with the launch of Nxt, the instant messaging service makes way for greater convenience and privacy for the buyers and sellers.
Quikr has made an outstanding visibility as a result of their well-planned advertisements through TVCs, print and online media.

Acquistion of CommonFloor:
Of late in 2016, Quikr announced its acquisition of the real estate vertical- CommonFloor. The prime investor in this $200 million all stock deal is Tiger Global, thereby making this acquisition to be the first major consolidation in this year. The CEO of Quikr, Pranay Chuliat expects this development to not only accelerate the growth of QuikrHomes but also their other verticals. 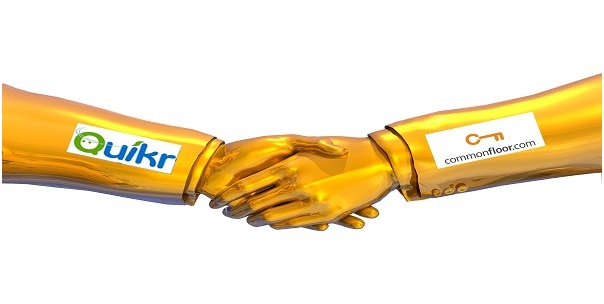 Threats Faced!
With the development of ecommerce platforms, companies like OLX, Clickin and Sulekha.com are strong contenders for Quikr. The battle for supremacy has become aggressive between the Quikr and OLX with both continuing to grow and evolve in online classified space as a result of their mass marketing initiatives.
With Big Bazaar coming up with good discounts on old goods as a part of their marketing campaign, it can prove to be a threat to Quikr. Also, now Quikr has ventured into online real estate segment which calls for enough competition. Housing.com, 99acres, Magicbricks to name a few are strong competition for QuikrHomes in this area.

Controversies Quikr Was Involved In!
Controversies in the online classified segment is not a rare phenomenon in India, however it was perhaps quite startling to hear the news about Quikr’s fake degree case of the Delhi Law Minister, Jitender Tomar. Interestingly, here Quikr was using Google’s PPC (Pay per click) ads for creation of leads for fake degrees. In addition, the fact that among the various fake degree ads on Quikr, there were premium ads wherein Quikr charged money. More so, the numbers of the sellers providing degrees have been verified by Quikr which inevitably blemished its reputation.
Advertisements like ‘Baby on Sale’ which became controversial have to be under careful observation and properly administered so as to evade the negative publicity which has proved to be detrimental to Quikr’s esteem. 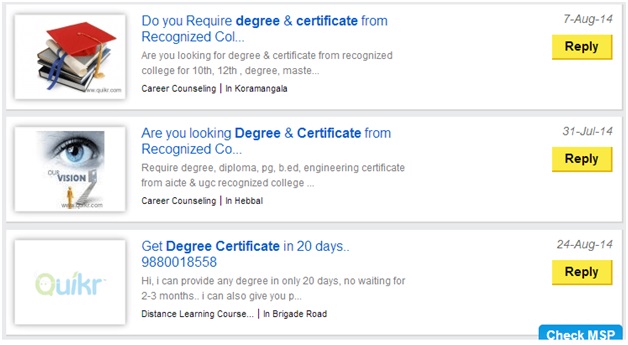