The year 2000, the beginning of the new millennium, saw the beauty of India yet again reach the summit with regard to beauty pageants. All the winners of Femina Miss India 2000 went onto to win the competitions in their respective categories. Bollywood bombshell Priyanka Chopra went onto win the Miss World while tennis star Mahesh Bhupati’s better half Lara Dutta won Miss Universe and last not but least the beautiful Dia Mirza took home Miss Asia Pacific. 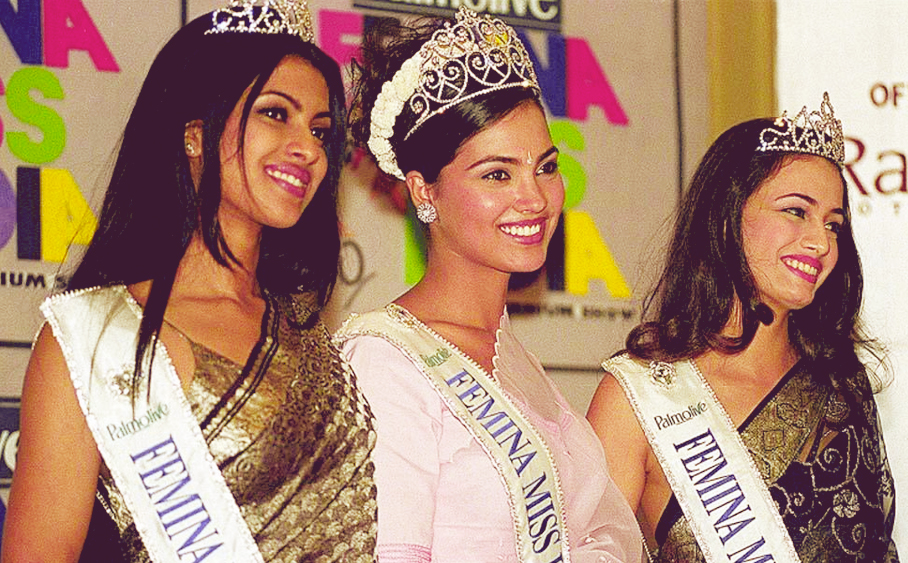 All three winners went onto have successful careers in Bollywood and win numerous acting awards. But today, we’ll discuss Mirza’s rise to success and her fairytale like love story to Sahil Sangha.

Her Beginnings…
She was born to a German father and a Bengali Hindu mother. When she was just 4, her parents called it quits and not long after her mother married again. She adopted her surname from her step father Ahmed Mirza who passed away in 2003. Mirza lived a normal life which turned on its toes when she was crowned the second runner up of Femina Miss India. 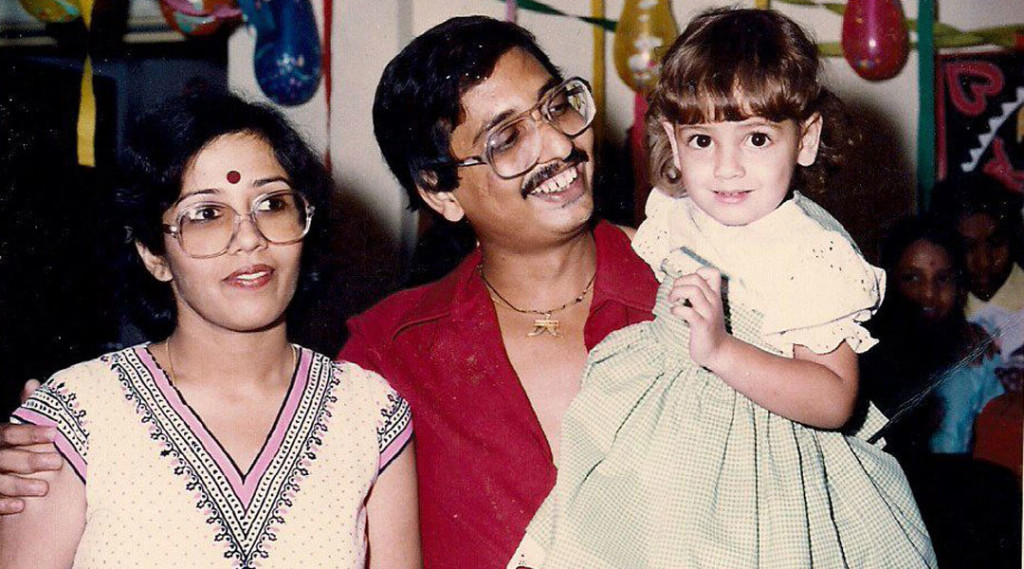 Dia eventually went on to be crowned Miss Asia Pacific and along with that she bagged Miss Beautiful Smile, Miss Close-Up Smile and Miss Avon.

Her Role In Bollywood
Almost immediately, a flurry of Bollywood offers came her way. She made her debut opposite R. Madhavan in the film Rehnaa Hai Terre Dil Mein and followed that with Parineeta which was produced by Vidhu Vinod Chopra. 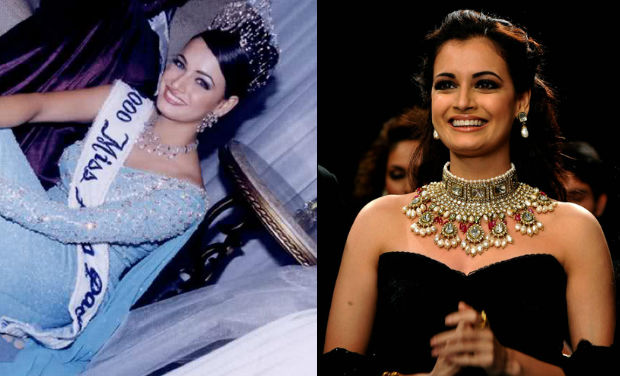 She then went on to steal the hearts of many men with her roles Acid Factory, Dus and fight club and many more but currently the actress is on a sabbatical from acting and is hardly seen in the spotlight, though she has delved into philanthropic activities such as PETA, prevention of female feticide, CRY, HIV awareness and much more.

The Beginning Of Their Love
She stepped on the brakes of acting career when Mr. Sahil Sangha came into her life. Now, together they run a production company called Born Free and have produced several Bollywood hits. The couple announced their link-up in 2011 and got engaged in April 2014. In what was a private ceremony, attended by close friends and family, the couple exchanged their vows in October of the same year. 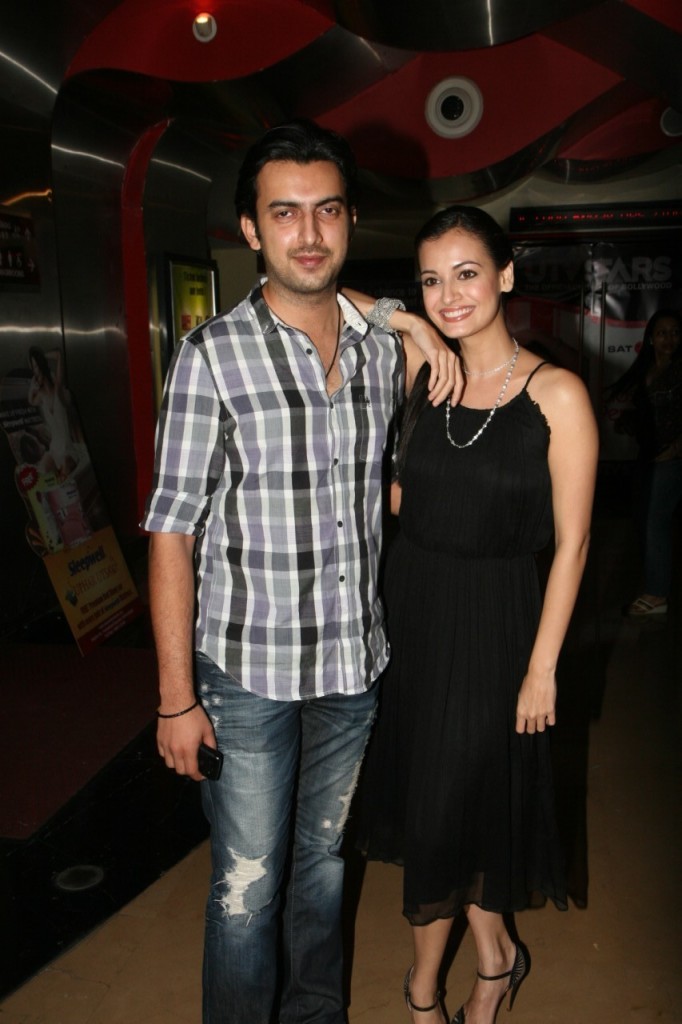 Having done his education in New York, Sahil is a trained marketing and advertising professional and delved into the world of films when he started to work with Sunil Manchanda of MAD Films. He was also the assistant director of ‘Salaam-e-Ishq’.
Before we get into the glitz and glamor of the ceremony which comes with every celebrity couple, let’s get into where it all started. 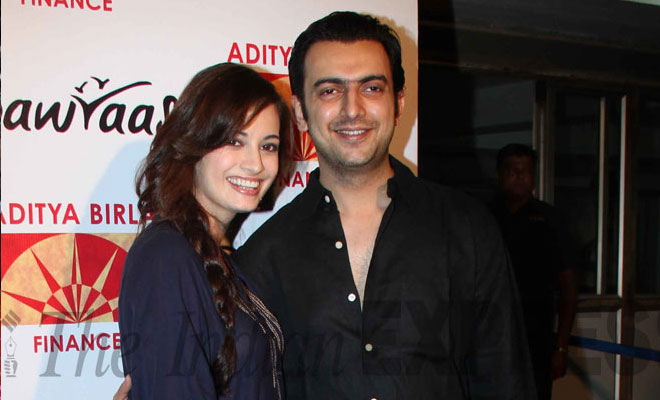 The couple has known each other since 2009 and before they became lovers they were acquaintances. They first met when Sahil went to her house to read through a script. Slowly they started to get closer and closer and before they knew it they were in love. According to Mirza, ever since she fell in love with him she was waiting for him to propose and even once jokingly said that he just might propose after the wedding, poking at his level of procrastination. 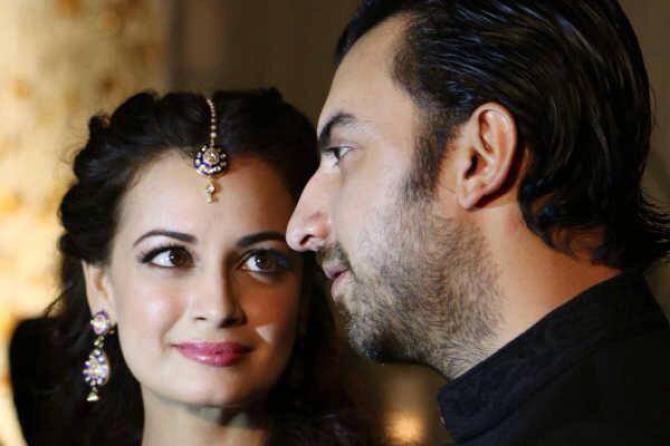 While they were attending an award function in New York, Sahil took a detour to the Brooklyn Bridge. There he went on one knee and asked Mirza to marry him. Teary eyed and overwhelmed by the cheers and claps by the onlookers, she accepted his proposal in a fraction of a second.

Well acquainted with delays, the couple had to postpone their wedding twice as a result of ill-health of their family members, but as destiny had it they finally tied the knot on October 18th, 2014.

On asked why he chose Mirza to spend the rest of his life with, he said, “What I love the most about her is that in one word, she is pure. She is very giving and all heart, which is also a problem as then you need to take care of your heart. She lights up a room as soon as she walks in.” 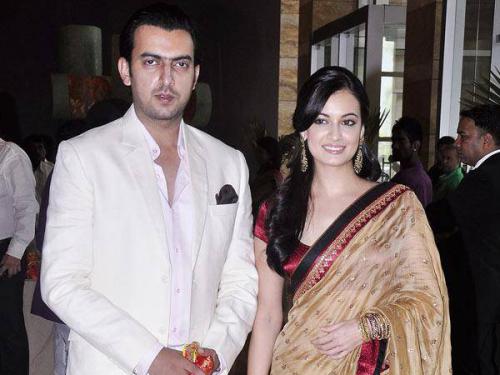 Instead of a full blown publicized wedding that has thousands of guests, as with most Bollywood weddings, the couple chose to have a small simple private ceremony which was solemnized by the authentic Arya Samaj rituals.
Dia said, “I am very happy. It was a beautiful Arya Samaj ceremony. The vows were explained to us. It was wonderful because it was good to be conscious of what you are going through, and what are the vows you are exchanging. It was a dream wedding.”

The wedding was spread over four days including the pre-wedding and main wedding rituals. All the functions were held at a farm house in Delhi that was decked to match the beauty of this couple.

Do You Know Which Perfumes Do The Popular Bollywood Divas Use? 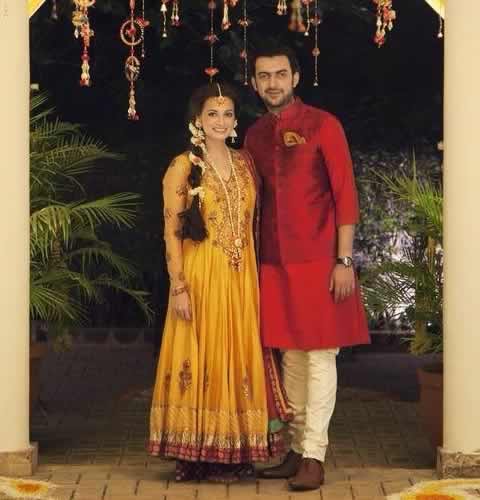 “Even my mehendi is not the typical heavy look; it is just a simple small design. That is because I am a very unconventional bride, “said Dia.

She looked as radiant as the sun with her sunshine colored anarkali with was custom designed by renowned designer Ritu Kumar. Sahil too matched her radiance with his shiny maroon kurta.
The ceremony was only attended by their closest family and friends.

The Sangeet Ceremony That Got Everybody On Their Feet 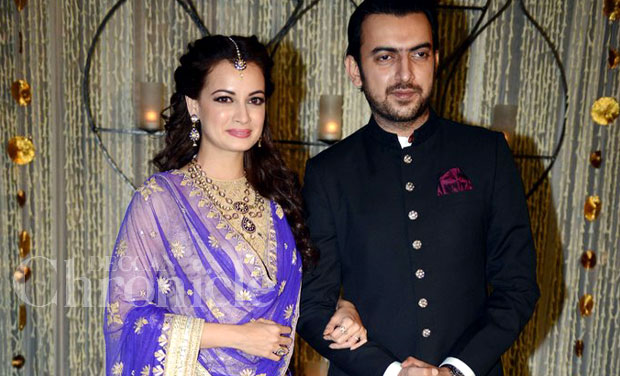 As per the wishes of the couple, the farm house was lavishly turned into paradise as it was covered by rajnigandha flowers. Sahil sported an eye-catching black bandhgala coat while Dia melted hearts with her bright purple and golden lehenga that was designed by Anita Dongre.

To make the evening memorable for the couple, Dia danced and performed on the songs Aao Huzoor and Bole Chudiyan. 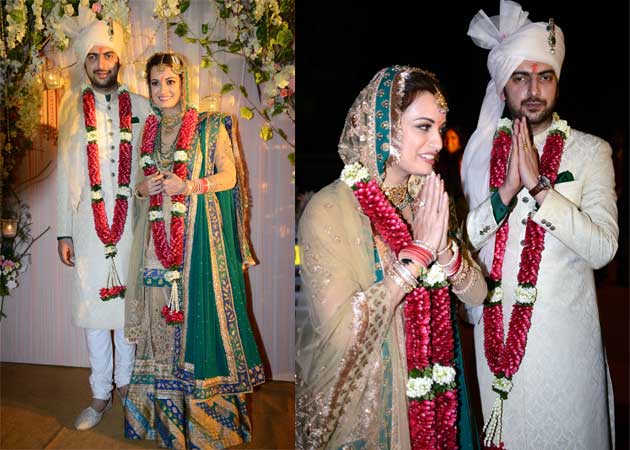 Designed by Ritu Kumar, Dia looked heart stopping with her sharara made radiant by her golden vest, while Sahil sported an off-white achkan which was custom made to his taste by designer Raghavendra Rathore.

The wedding was unlike most of the other Bollywood ones which are extravagantly publicized and have thousands of guests. Dia and Sahil chose to keep it small and private, though celebrities and close friends such as Cyrus Sahukar, Aditi Rao Hydari, Lara Dutta were present to witness this fairytale like union. 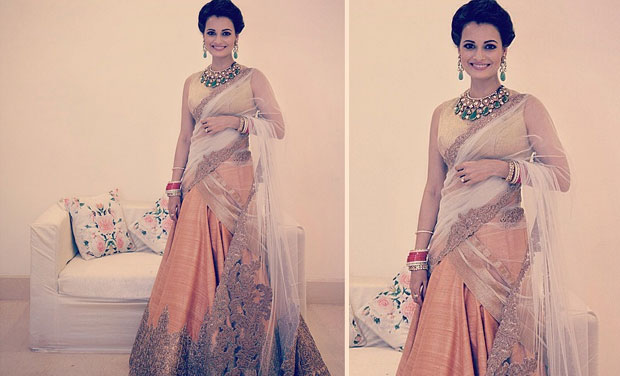 As the days progressed Dia looked even more beautiful and resplendent with her attire. Personally I think she saved the best for last. Designed by Shantanu and Nikhil, she got the shutterbugs and fans swooning with her almost like goddess like peach and golden lehenga. The best part was that she didn’t even overdo the jewelry and just wore an emerald necklace that just brought out the best of her outfit.

The designers even tweeted:
“Couldn’t believe how a princess from a fairy tale could be brought to life. @deespeak did just that. We love you.”
Their First Diwali As A Couple 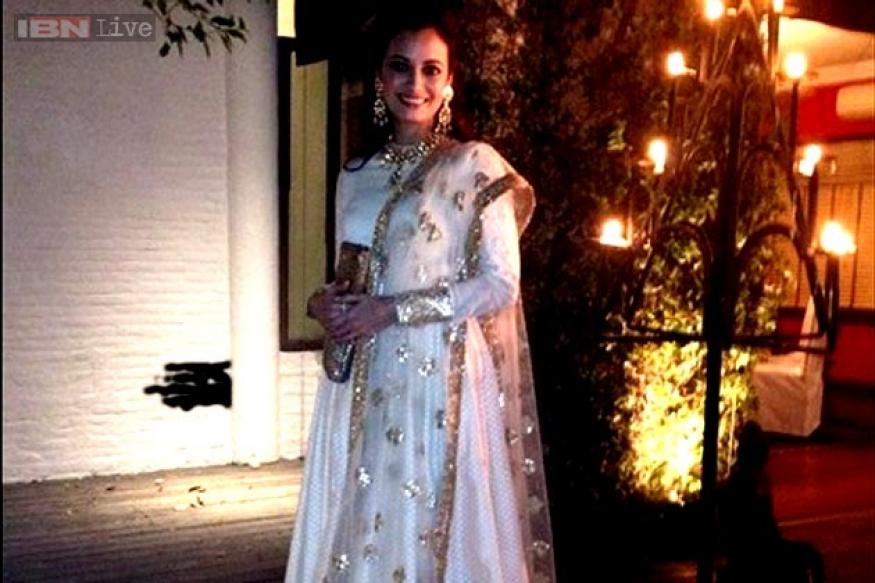 Instead of heading straight out for the honeymoon post the wedding, the couple decided to stay amongst their close friends and family to celebrate their first Diwali as a married couple. Wearing a white Sabyasachi outfit she took a photo and tweeted, ““First Diwali after marriage

filled with love and light!!! #Blessed #Grateful #Family Time.”
We wish the very best to this glamorous couple to keep the radiance of their love strong as every year passes.