Favourite Perfumes Of Bollywood Actresses That Will Spoil You For Choice!

We choose to live by choice, not chance, and this is one of the governing principles of our lives. We tend to assert our choices in every aspect of our day-to-day lives, be it food, color, clothes, footwear, or even perfumes, most of us have a favorite amongst all the mentioned things. We are social beings, and our choices are usually shaped by trends that others follow. Most often than not, voluntarily or involuntarily, we tend to follow Bollywood stars, as they are the epitome of style and elegance. We are all aware that they work hard to look good and there are many other people who work day in and day out to make these actors and actresses stand out in the celeb crowd. Their style quotient is an amalgamation of what they are, whether it is the attire, accessories, make-up and fragrance and talking about perfumes, they are very choosy in selecting because somehow they are known by that fragrance as it reflects their personality. Every renowned tinsel town actresses wears a certain scent and have become unofficial brand ambassadors for these products which they count as their favorite.

1. Aishwarya Rai Bachchan (Clinique’s Happy)
Happy was brought into the market in 1997 by Jean Claude Delville and Rodrigo Flores-Roux in 1997, and the following year it received the FiFi award. This perfume is priced at Rupees 4000 for a 100ml volume. This perfume has a fruity flowery smell which feels like the fresh morning breeze and this makes it the favorite of this blue-eyed beauty.

3. Madhuri Dixit (Issey Miyake)
The lady with a charismatic smile has been an ardent user of perfumes from the design house of Issey Miyake. In 1992, this Japanese brand created its first perfume for women, and since then they have come up with a variety of fragrances which are as fresh as spring water. These perfumes have mild flowery fruit smell coupled with divine woodsy note. This product’s rate is approximately Rupees 4000 for 100ml. 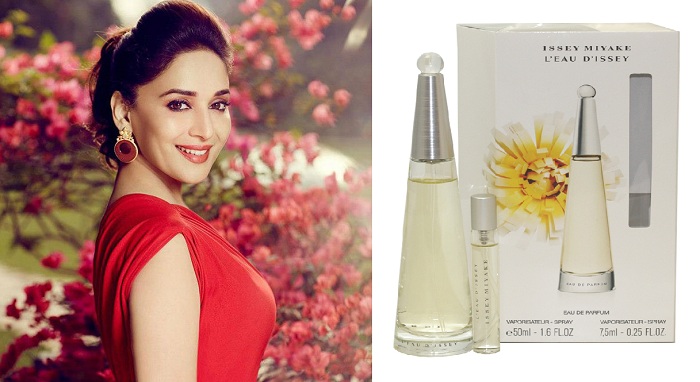 4. Katrina Kaif (Gucci’s Rush)
The unblemished beauty of Bollywood prefers Gucci’s Rush perfume which was introduced into the market in 1999. 75ml of this is sold at around Rupees 5000 and it is a blend of mystical forest scent and fresh smell of blossoms. 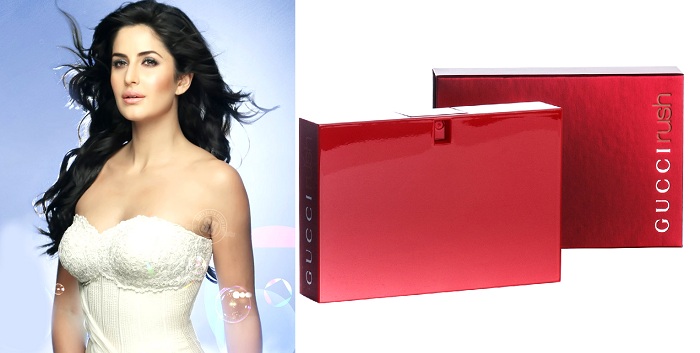 5. Priyanka Chopra (Ralph Lauren Romance)
Harry Fremont in 1998, created this awesome perfume which has become a favorite of the Desi Girl of B-town. This is a mix of scents such as lilies, juicy fruits, pungent ginger and carnations create a joyous aroma which lingers on for hours. 100ml comes at around Rupees 5000.

6. Shilpa Shetty (Green Tea by Elizabeth Arden)
Most of us know about the perfume brand S2 owned by Shilpa Shetty. So this makes us believe that this scent suits her preference. Apart from her own brand, she is a fan of Green Tea by Elizabeth Arden. The base note of this definitely is of green tea, and together we that we get a hint of oakmoss, jasmine, cloves and celery seeds. This was created by Francis Kurkdjian in 1999, and is priced at around Rupees 1500 per 100ml.

7. Alia Bhatt (Armani Code)
The Barbie doll of Bollywood has a unique choice as she prefers masculine fragrances to feminine ones. Her favourite among the various men’s perfume is Armani Code which ranges between Rupees 5000-5500. The head notes of this are of lemon and bergamot, while the heart and base notes comprise olive blossom, star anise, woody and leather. In 2006, this was bestowed with the FiFi Award “Fragrance Of The Year” Men’s Luxe. 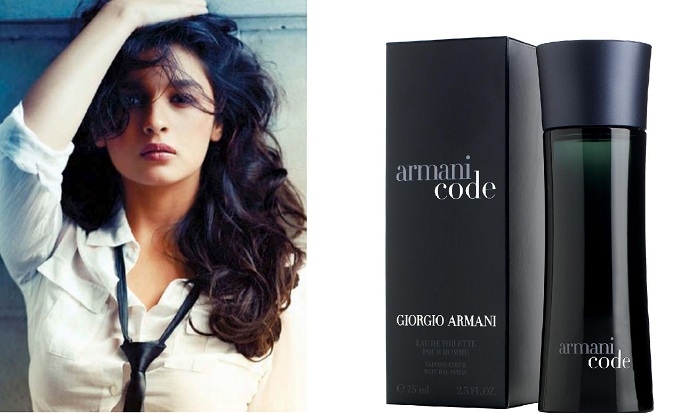 8. Sushmita Sen (Red Door by Elizabeth Arden)
Red Door by Elizabeth Arden is the perfume preferred by this crowned diva. This scarlet product is priced at around Rupees 3300 for 3.3 ounces. Created by Carlos Benaim, the base note is of sandalwood, honey and vetiver; heart note comprises of jasmine, orange blossom, orchid, lily, freesia and violet; while the head note is of red rose and ylang-ylang. The versatile actress Vidya Balan also has the same liking as Sushmita Sen in terms of this perfume brand. 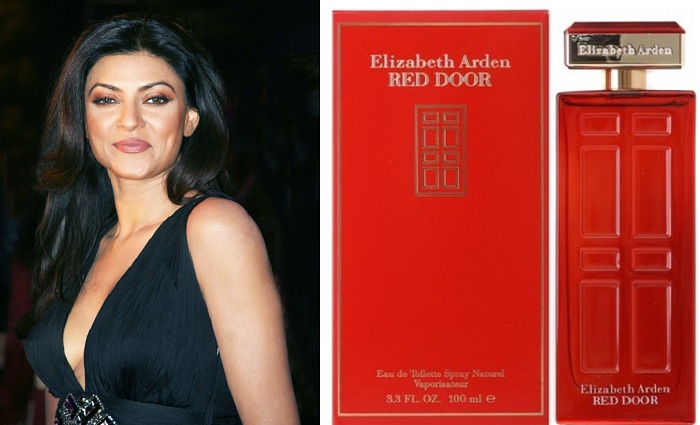 9. Kangna Ranaut (Chanel No. 5)
This perfume is one of the oldest known perfumes and is among the bestselling of today’s time. The need for a fragrance which would define women in an unbiased manner was initiated by famous fashion designer Gabrielle Bonheur (Coco) Chanel when she asked Russian-French perfumer Ernest Beaux to create this perfume. The Queen of Bollywood is an admirer of this signature scent which has a base notes of vanilla, sandalwood, amber, vetiver and patchouli; head notes include bergamot, aldehydes, lemon, ylang-ylang and neroli with heart notes comprising of rose, jasmine, iris and lily. A 100ml volume comes with an exorbitant price tag of Rupees 10000. 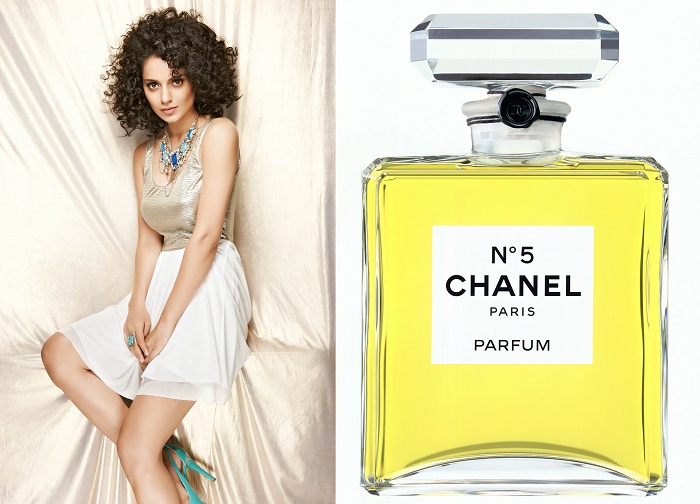 10. Sonam Kapoor (Michael Kors)
Michael Kors perfume by the same name marks as the favourite of this fashionara. This perfume has come out of the creativity of Laurent Le Guernec. This fragrance costs around Rupees 6500 for a 100ml spray and has a head note of Chinese osmanthus, freesia, tamarind and incense; heart notes are iris, orris root, tuberose, arum lily and peony; and base notes are of cashmere wood, musk and vetiver. She also uses Daisy by Marc Jacobs and Silver Rain by La Prairie apart from Michael Kors.

11. Sonakshi Sinha (Issey Miyake and Dolce and Gabbana Light Perfume)
Like Madhuri Dixit, she is also a fan of Issey Miyake, and she has one more favourite which is Dolce and Gabbana Light Blue perfume. In 2001, D&G came up with this perfume which has a refreshing flowery-fruity scent along with fresh smell of breeze. The mind behind this is Domenico Dolce, Stefano Gabbana and Mario Testino. 3.4 ounces of this spray ranges at around Rupees 4000. The choice of D&G is also shared by talented actress Anushka Sharma.

12. Kareena Kapoor Khan (Jean Paul Gaultier’s Classique)
Classique from the creativity cluster of Jean Paul Gaultier is the one chosen by Kareena Kapoor Khan. This perfume reached the markets in 1990, and has the essence of rum and rose as the top notes; middle note comprises of daffodils and vanilla orchid; and sandalwood, amber, Bourbon vanilla and tonka bean reside in the base notes. 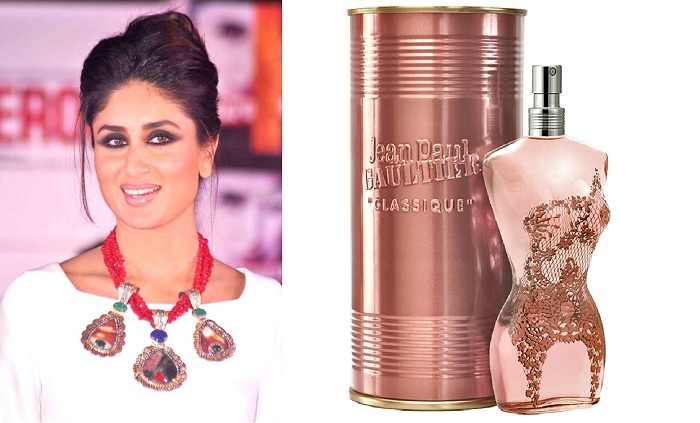 13. Lara Dutta (Tom Ford’s Black Orchid)
In 2006, the Givaudan Company came up with the Tom Ford Black Orchid perfume and this is what Lara Dutta prefers. The top notes include black truffle, French jasmine, black currant and ylang-ylang; middle notes are flowery; while base notes include dark chocolate, sandalwood, patchouli, vanilla, incense, balsam, vetiver and amber. 100ml of this perfume is priced at around Rupees 12500.

14. YamiGautam (Dior’s Forever and Ever)
In 2002, Dior presented a new fragrance named Forever and Ever which was a limited edition perfume. This perfume at different note levels had freesia, ivy, aquatic jasmine at the top, pelargonium, rose and almond blossom in the middle; musk, nutmeg and vanilla at the base notes. In 2006, they came up with another limited edition scent named Forever and Ever Dior which has similar notes. The My Fair Lady of the ad-world chooses this as her signature smell which ranges between Rupees 10000-11000 for 3.4 oz.

15. Dia Mirza (Baby Doll by YSL)
Baby Doll belonging to the Yves Saint Laurent (YSL) brands is the best-loved perfume by this girl next door resembling actress. This was brought out by Cecile Matton and Ralf Schwieger, which became a recipient of the FiFi award in 2000. The base notes are of sandal, cedar, vanilla and tonka; middle notes comprise lily, rose, heliotrope and freesia; while the head notes bring in the essence of apple, orange, blackcurrant, and pineapple. 100ml of this is priced approximately at Rupees 5500, and along with Dia Mirza, the bold and the beautiful Bipasha also sports this fragrance.

16. Kajol (Cool Water)
This floral perfume was launched in 1996 by Davidoff and it costs around Rs5000 for 125ml. It combines the pineapple, woody and citrus scents into a pleasant fragrance and it is the favorite of this star.

17. Preity Zinta (Gucci’s Envy)
The Bubbly girl of B-town wears the enviable cologne by Gucci called Envy which hit the market in 1997 and earned instant popularity. The essence we find in this is of rose, jasmine, magnolia, woodsy, lily, Hyacinthus, musky and iris. This came from the innovativeness of Maurice Roucel and initially it was a masculine perfume but in 2004 this brand introduced another enchanting perfume and named it Envy Me for the fairer sex which was concocted by Karine Dubreuil. 100ml of the Envy perfume comes with a price tag ranging from Rupees 4000 to 4500. 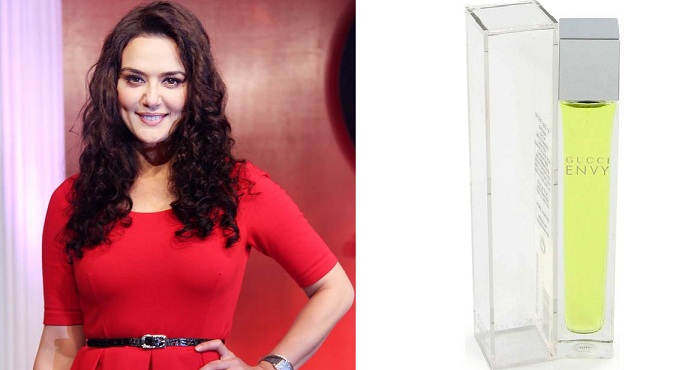