Over the years, Bhojpuri cinema has grown to be really popular, even in regions where the language is not widely spoken. Nationally renowned actors such as Ravi Kishen, Manoj Tiwari, Dinesh Lal Yadav, Shakti Kapoor and even Dharmendra have starred in Bhojpuri flicks. Their popularity with the fans of this regional language has also earned them opportunities in Bollywood. Though many have criticized these flicks for being filled with too much of sleaze and emphasis on erotica, several others even love them for their humorous sleaze. Of course, in the North Indian state of Bihar these flicks are a big rage, since they cater to the sensibilities of the locals and the catchy titles. These humorous flicks have also been uploaded on internet platforms like YouTube and have been attracting a lot of traffic for both their titles as well as comical content. Here are 20 such WTF Bhojpuri movies with outrageous titles that will leave you on the floor laughing.

1. Pepsi Peeke Lagelu Sexy
Many of us have been gulping ‘Pespi’, one of the world’s most favorite beverages for decades now, but this is probably the first movie which revealed this surprising fact about the soft drink. The movie also emphasizes on a college love story, through hilarious songs like ‘College Wali’. 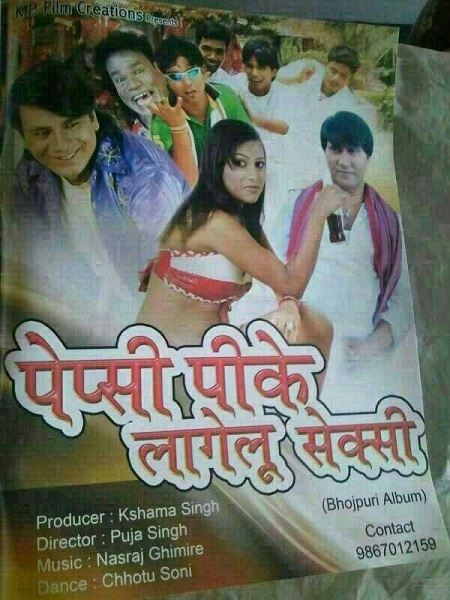 2. Laila Maal Ba, Chhaila Dhamaal Ba
This Bhojpuri rom-com revolves around the lives of a man from rural Bihar and an urban woman who tie the knot. The funny set of events which follow after the marriage forms the rest of the plot. The movie boasts of actors like Pushpendra Singh, Seema Singh and Pradeep Sharma, who are acclaimed actors of the Bhojpuri film world.

3. Rikshawala I LoveYou
Yet another Indian saga which proved that love really knows no boundaries and economic disparities. The heartthrob of Bhojpuri cinema, Dinesh Lal Yadav, is the protagonist in this action-packed drama, which is also famous for its witty dialogues. 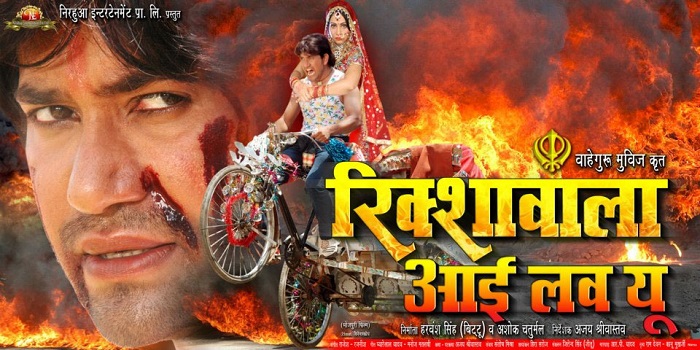 4. Lehanga Mein Baad Aail Ba
Easily, this is one of the boldest titles used in any Indian movie so far and its quirkiness apparently drew huge crowds to the cinema halls screening the movie. It would be better that we don’t try and understand the story and the intentions of each of the characters of this flick. 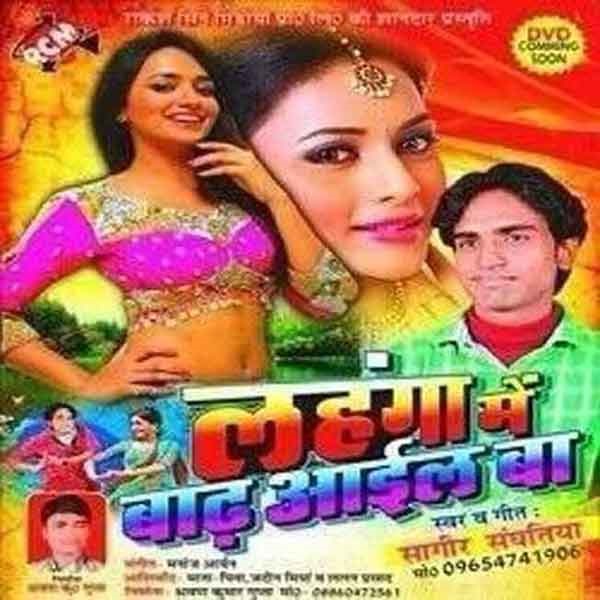 5. Miya Anari Ba Biwi Khilari Ba
The movie is believed to be a musical comedy and is a take on the sexual appetite of the Indian masses, especially those who hail from small towns and villages. A village damsel becomes the apple of many eyes and the subject of fantasy. However, the director has managed to portray erotica with a pinch of humor. 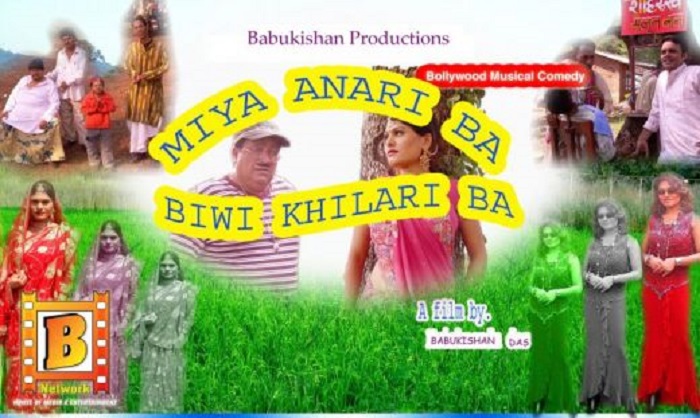 6. Jeans Wali Bhauji
Here’s a movie title, which officially declared that Indian women can even be spotted in jeans and not just traditional attire alone. The movie features scenes of a seductress who is comfortable being clad in jeans. However, there are a few steamy sequences where she is draped in saris too. 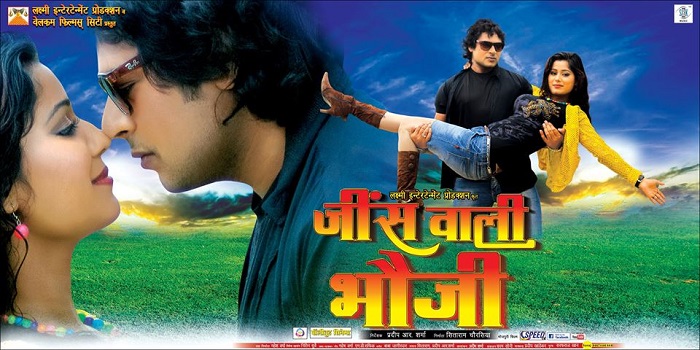 7. Hum Balbrahmachari tuh Kanyakunwari
Doesn’t the title alone speak volumes about what the audience can expect from this flick? This 2006 movie stars Sikander Kharbanda, Kunal Singh and Brijesh Tiwari. Like many other products of Bhojpuri cinema, this flick too has many unintended rib-tickling moments. 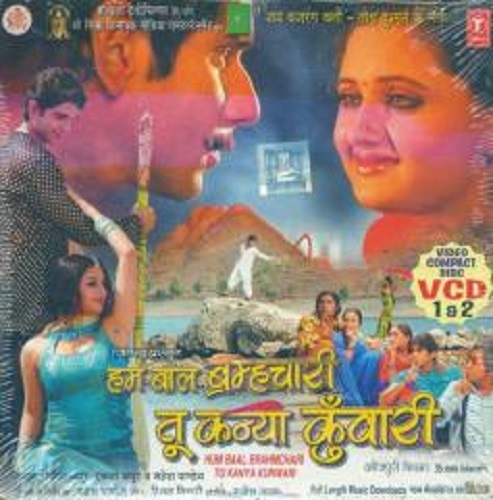 8. EK Bihari Sau Pe Bhari
Perhaps, this was Bhojpuri cinema’s answer to the countless Bollywood films where a muscular protagonist is a crusader of the society. Before you taunt your friend from Bihar, always remind yourself of this funny title and the aggressive man in the poster of the flick. 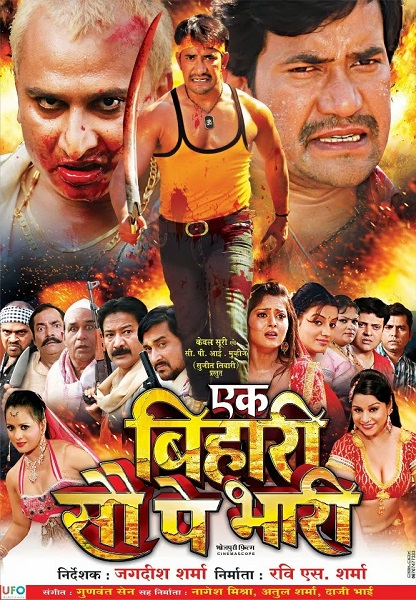 9. Hero Gamchawala
Heroes come in all shapes, sizes and names and Hero Gamchawala proves that to the world. Starring Yash Kumar Mishra, the movie is based on yet another run of the mill tale, but the hilarious moments make it totally worth a watch. 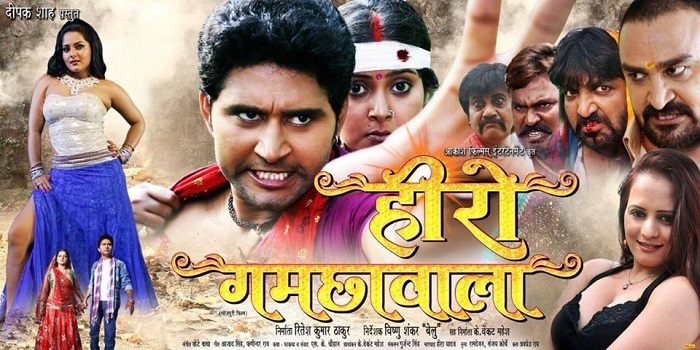 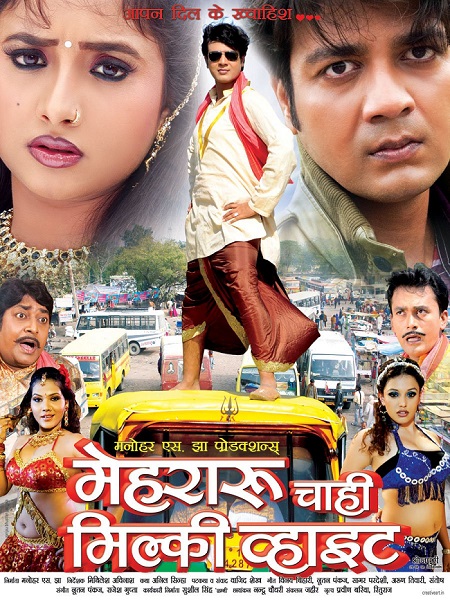 11. Sali Badi Sataveli
Bhojpuri cinema seems to be too obsessed with seductive sister-in-laws. Here is another one based on the life of a bombshell and in a hilarious way pays tribute to Bollywood beauty Vidya Balan’s act in the blockbuster ‘Dirty Picture’. 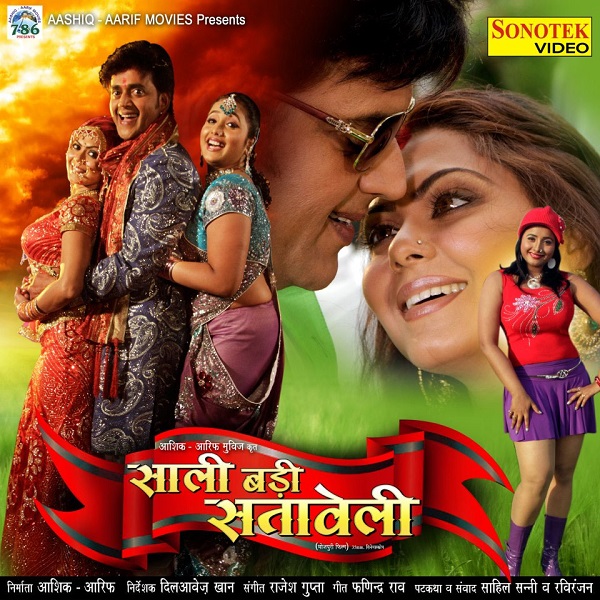 12. Pandit Ji Batai Na Byaah Kab Hoyi
Ravi Kishen is undoubtedly one of the most popular stars of Bhojpuri cinema, who has also shared screen space with Bollywood biggies like Salman Khan in movies like ‘Tere Naam’. ‘Pandit Ji Batai Na…’ rewrote Bhojpuri movie records and turned into a franchise. The sequel to this flick with a funny title also created a lot of buzz amongst movie buffs. 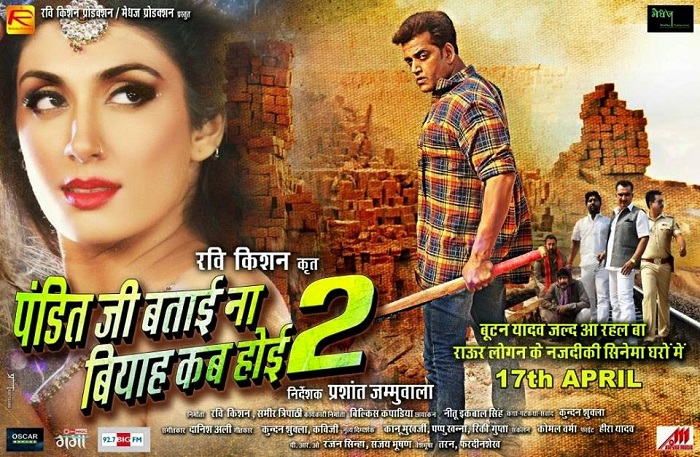 13. Settingbaaz
A typical commercial potboiler, this movie stars actor Rahul Singh and consists of item numbers where the lead dancers shows a bit of cleavage and sets the tongues of many hungry men wagging. Of course, there are goons in the flick who induce the action element and of course get beaten by the protagonist. 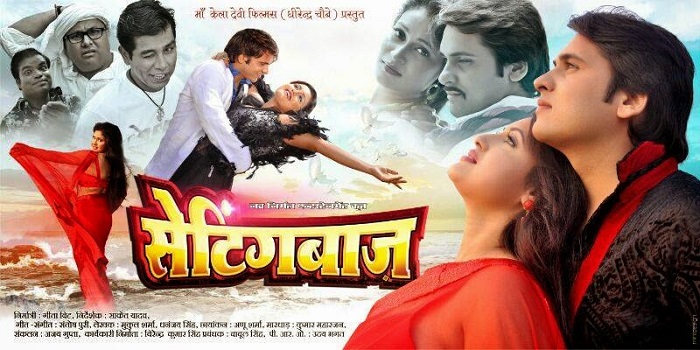 14. Ek Laila Teen Chhaila
Starring the bong beauty Rani Chatterjee, this movie is also action packed, but the difference? Rani Chatterjee bashes up the bad guys all by herself, rather than rely on a muscular hunk. This flick is one of the best modern day tributes to woman empowerment. 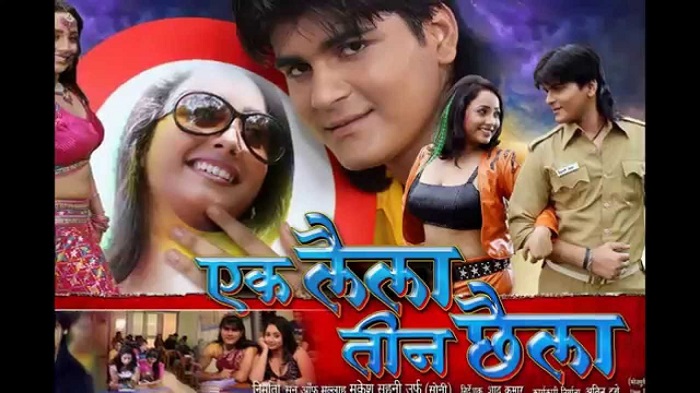 15. Hum Baani Bihari Tiger
If the Ajay Devgan starrer ‘Singham’ franchise hasn’t thrilled you enough, here is a flick which glorifies the brave Indian policeman who keeps our society safe by beating the bad guys black and blue. 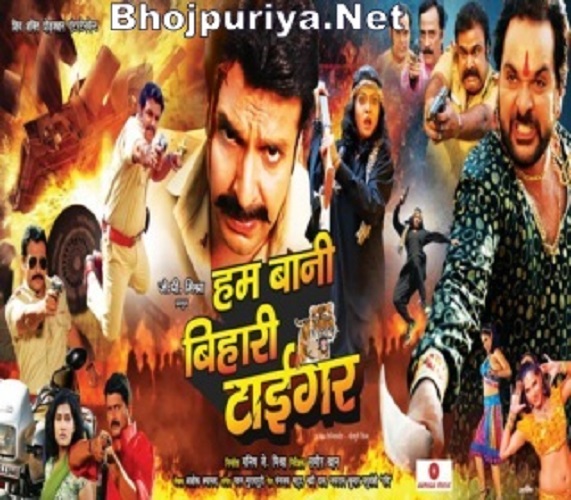 16. Lakhon Mein Ek Hamar Bhauji
Undoubtedly acclaimed actor Ravi Kishen was one of the selling points of this movie which is a tale based on the Bhojpuri speaking community residing in rural Bihar. Even the songs from the flick were well welcomed by the audiences. 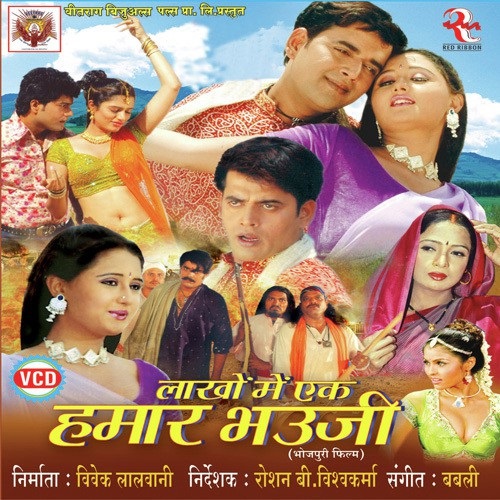 17. Tohre Karan Gail Bhesiya Paani Mein
One cannot help but smile on just viewing the hilarious title of this movie. The movie is a comic roller coaster from start to end and many consider this to be a good medicine to cure a person of stress after a hard day’s work. 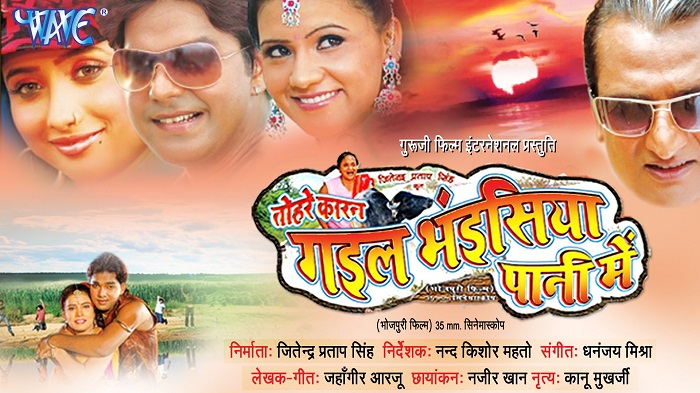 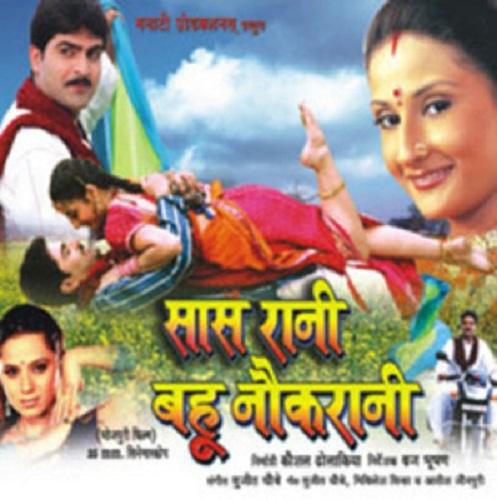 19. Ajab Devra Ki Ghazab Bhauji
If you have watched the Ranbir-Katrina starrer Ajab Prem Ki Ghazab Kahaani’, you can’t afford to miss this hilarious flick which is yet another take on lust and seduction. 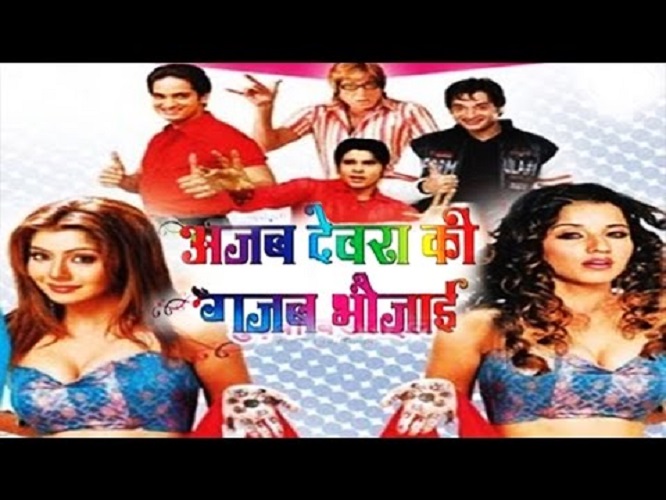 20. Pappu Ke Pyaar Ho Gayeel
Pappu doesn’t just fail and isn’t a loser who is bashed by everyone all the time, but is also capable of being loved. Manoj Tiwari, a man who is greatly responsible for Bhojpuri cinema being nationally recognized, is the protagonist of this movie, which is peppered with humor. 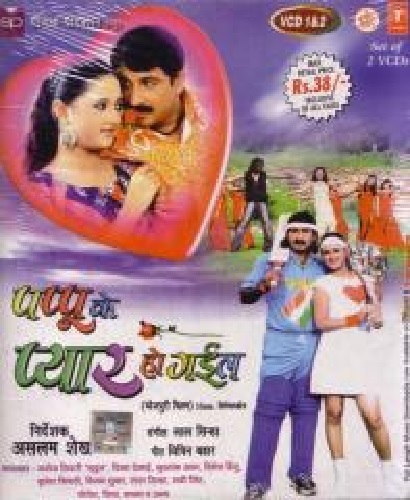