A moment where millions simultaneously jump to their feet, spirits of all heightened and an adrenaline rush like no other, can only be classified into one word- Goal, and as Bill Shankly would put it,” Football (soccer) is a matter of life and death, except more important.” Realizing the fact that a goal makes so much of a difference adds to the moment where people perch on their seats waiting for that ball to disturb the back of the net, a sight that has sent nations into ecstasy and players into a world where nothing else matters. It can make or break a day for many and for players it’s a part of the seesaw of their careers in which their reputations as to whether they can deliver the moment in front of millions of eyes is at stake. The joy of actually accomplishing the task of scoring is a charge that heightens the blood rushing through their veins and how at times players have decided to handle this moment of celebration has gone down in history. Most have seized the opportunity to hit back at their detractors or critics and some have used these moments in the spot light to pass a message loud and clear. Having said that, some celebrations were just not about getting the team into an energetic huddle, rather a reaction from the individuals that were just over the top. More than the score line, these reactions have put these players on the headlines of tabloids across the globe. While there are innumerable moments such as these, we decided to pick 10 memorable goal celebrations in soccer history that we though stood above all, based on the controversy and gossip they stirred.
1. The Snort
English striker Robbie Fowler who was nicknamed ‘God’ by the Anfield fans was strung into controversy with his goal celebration against rivals Everton. Rated as one of the most fierce derby’s in the 90’s, Fowler scored off a penalty that he netted in the right corner and dashed to the goal line and mimicked the action of snorting cocaine. Liverpool manager Gérard Houllier did come to his defense saying that he was imitating the ‘Cameroon grass eating’ celebration but it was Fowler himself who admitted that he did imitate the action of snorting a line of coke as the Everton fans had long accused him of being a coke addict. Neither the English FA nor the Liverpool Management saw this in a lighter vein and slapped a 60,000 Euro fine and a four-match ban on him.

2. The Finger-Ripping Celebration
Swiss International player Paulo Diogo was certainly involved in a goal celebration he would later wish had never happened. Playing for Servette FC, Paulo assisted a goal against FC Schaffhausen in the dying minutes of the game, one that would seal their win. Diogo scampered away from the rest of his team in his excitement and attempted to climb the steel fence separating him from his fans. He then ecstatically jumped up and down while his hand was fixed to the fence, but unknowingly, the striker’s wedding ring got caught onto the fence and while jumping off his finger got slit in half. Despite being one finger less, the merciless referee handed him a yellow card as he was stretchered off the pitch. Later attempts to retrieve his finger went in vein and the Swiss national continued with the rest of his career with composed goal celebrations and four fingers on his left hand.

3. The Manic Stare
Regarded as the greatest player of the 20th century, Diego Maradona had already clinched the World Cup for his country in 1986 and reached the final in 1990, only to lose to West Germany 1-0. In 1994, Maradona scored against Greece, a goal that would be his last for Argentina. Maradona wasn’t granted much space by the defenders through the game but skipped onto his favorite left foot after a string of immaculate passes and netted the ball into the left top corner. The goal celebration saw Maradona charge straight towards the camera, stare straight into it with blood-shot eyes and scream almost like he was bonkers. The celebration grew much suspicion about his cocaine addictions and post the match he failed the drug test, which saw the greatest player that Argentina had ever seen sent home, being expelled by FIFA just after two games into the World Cup.

4. The Head-Butt
Not all the best or most memorable moments in soccer come from International football matches and this moment proves that. An amateur player in a match between Italian clubs Ponticelli and Riolo Terme possibly displayed the funniest goal celebration ever. Following a howler from the goal keeper from a forgetful free kick that led to a simple and almost kiddish goal, the striker raced towards the dugout in what most spectators thought was to embrace his coach and teammates. The striker surprised everyone by dodging all of them and headed straight to the side of the dugout only to bang his head against it. The plastic sheet of the dugout shattered to pieces with the impact of the striker’s head-butt. The striker, though taken aback by the fragility of the sheet, continued his celebration until halted by the referee to be shown a red card for his act of vandalism.

5. The Nazi Salute
In a match played between AEK Athens and Veria in the Greek Super League, midfielder Giorgos Katidis did certainly pay for his naivety. After scoring the goal that assured a win for his club, the 20-year-old in the heat of the moment stretched out his hand in a salute resembling that of the Nazis. Though his coach defended the kid saying that he lacks political knowledge and ideas, and he probably imitated the salute he saw on TV, the fans and football federation criticized his actions. Sadly, Giorgos Katidis was handed a life ban by the Football federation for this insensitive gesture.

6. The Shirtless Celebration
Sometime it takes just a moment to shoot to fame and become World famous and for US Footballer Brandi Chastain, the World Cup Final against China was that moment. Now-a-days though a rare sight because of the strict action taken by FIFA, back then it was a norm for guys to rip off their shirt after scoring a goal and not see a yellow card, but none would imagine a girl doing the same. In a packed Rose Bowl stadium on a sweltering evening, Brandi took to the spot when her country was a goal up against the Chinese in the decisive penalty shootout. Though she had previously missed a penalty against the Chinese goalkeeper Gao Hong, she decided to change things and use her left foot for the kick. The move confused the experienced keeper and she managed to net the goal, and just like many male footballers in the past, she took off her Jersey to celebrate her team becoming the champions of the world.

7. A Hit Back At Detractors
In the run up towards the European Championships in 1996, Paul Gascoigne the English striker who was known for his reveling antics off the pitch was snapped by the paparazzi at a night out in Hong Kong, drunk. Though many wanted him off the team for his lack of focus, Paul silenced his critics with an emphatic goal at the championship that saw him ingeniously flick the ball over the Scottish defender with his left and volley the ball into the net with his right in a continuous motion. The top striker of England then lay on the pitch while his teammate squished water into his mouth to mock his detractors. Despite the brilliance of this striker, alcohol did finally manage to put a halt to his career.

8. Jimmy Bullard Plays Coach
Meeting Manchester City a season after a 5-1 drubbing, Funny man and Hull City striker Jimmy Bullard imitated his coach’s on pitch flak they received the previous season after scoring the equalizer against Manchester City. Jimmy converted a kick from the spot, guided his team to the side and mimicked the reprimand they received by coach Phil Brown the previous season as his team mates sat in a circle around him. The celebration was seen in a lighter note and put Jimmy’s sense of humor in the spot light yet again.

9. The Psycho Celebration
Sometimes netting the ball in the goal can emanate a burst of emotions not even the goal scorer can comprehend or control and for Newcastle player Temur Ketsbaia that was just the case. Miffed that he had been sidelined for most of the season, Temur finally came off the bench against Bolton Wanderers and slammed a rebound into the net, but it was his reaction to the goal that left his teammates and fans indecisive of the emotion during his celebration. Temur ripped his jersey off and frantically kicked the advertisement board as if in a violent brawl, although, his vent of frustration did give Adidas some desirable coverage.

10. Handcuffed
Australia’s top scorer and probably best player of all time yet, Tim Cahill is known for his goal celebrations, typically using the corner flag as a punching bag. In the season of 2004-2005 while playing for Everton against Portsmouth, Cahill scored yet again and this time changed his celebration by crossing his hands as if he was handcuffed. The celebration was dedicated to his elder ‘thug’ brother who was jailed the previous week for blinding a man by kicking him on the road without any provocations. Cahill later apologized as he was met with criticism by all and fans back home as well. 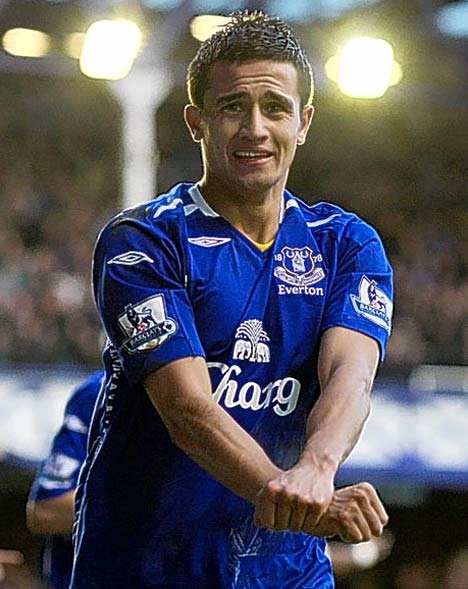 Stumble
Which other goal celebrations you think should be added to this list?