While the oldest amusement park, Bakken was constructed in 1583 at Coppenhagen, Denmark, the earliest of such centers that maintained a particular theme was Indiana’s Santa Claus Land. This was inaugurated in 1946, and since then many more have followed suit. Theme parks have always been a place most people like to frequent. It isn’t just about the number of rides or the variety of attractions we get to enjoy. The sole idea behind an entertainment park is the fact that on any given day, an individual can take a break from the monotony of his usual life, while relaxing and unwinding in different ways. Disneyland is one such center which revolves around all the characters created by Walt Disney, be it Mickey Mouse or The Little Mermaid. Most often the concepts don’t seem out-of-the-blue, being either related to cartoons or movies. However, we do find amusement parks that encompass the essence of experiences and themes that are strange. Going by the words of artist and photographer, Zero Dean, “Earth is simply the world’s biggest theme park and everyone you know is there. Enjoy it.”, we’ve explored 10 of the weirdest, wackiest, bizarre parks from around the world.

1. Hacienda Nápoles, Puerto Triunfo, Colombia
Once a residential property of Colombian drug kingpin, Pablo Escobar, the estate Hacienda Nápoles, located in Puerto Triunfo is spread across an across an area of 20 square kilometers. After his death, his land was initially taken over by the government. Eventually, the land was converted into a theme park, replete with a zoo, Escobar’s collection of cars, a bull fighting ring, and a hangar for private aircrafts. Though it doesn’t have too many visitors even on a weekend, authorities have at least cashed in on the fact that the museum and theme park give outsiders a taste of the life that was led by the cocaine baron. 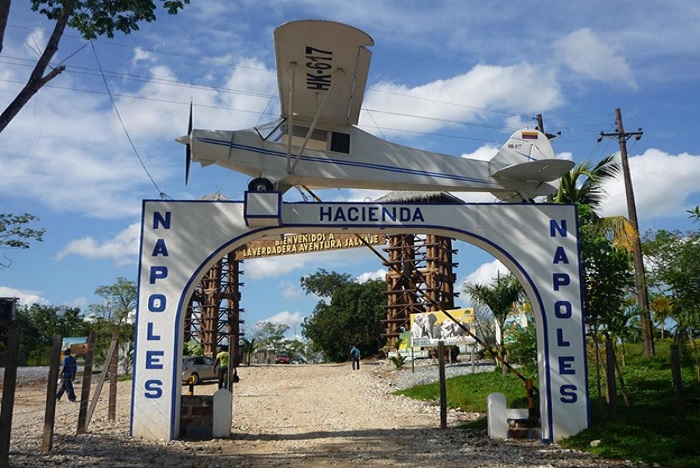 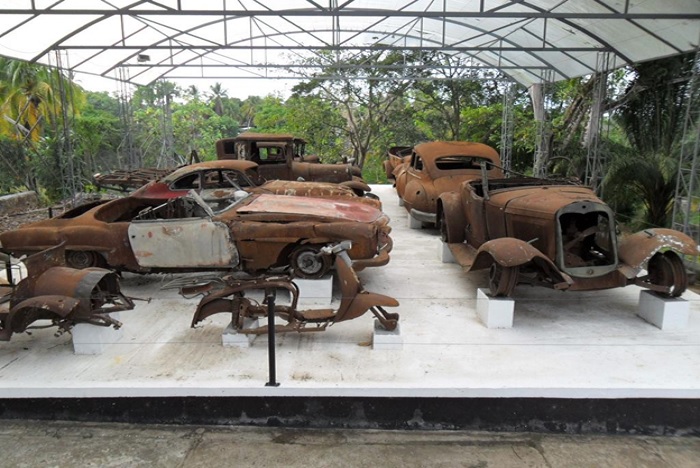 2. Crocosaurus Cove, Darwin, Australia
Centrally located in Darwin City, Australia, the Crocosaurus Cove is indeed one of the weirdest theme parks ever. Not for the faint-hearted, this amusement park provides an opportunity for brave visitors to come face-to-face with the saltwater crocodiles that Australia is so famous for. In fact, it boasts of having the largest display of reptiles in the entire world. As a guest, you have several options to spend your money well. You can either pet the young crocodiles or feed the large ones. The star attraction here though is something they call the Cage of Death. Wondering what it is? You get inside a tank that’s dropped into the water where these giant reptiles are roaming freely. The only thing keeping you safe would be the glass walls of the tank. You are also allowed to give them food. Fifteen minutes into this routine, and let’s hope you don’t end up getting a heart attack. 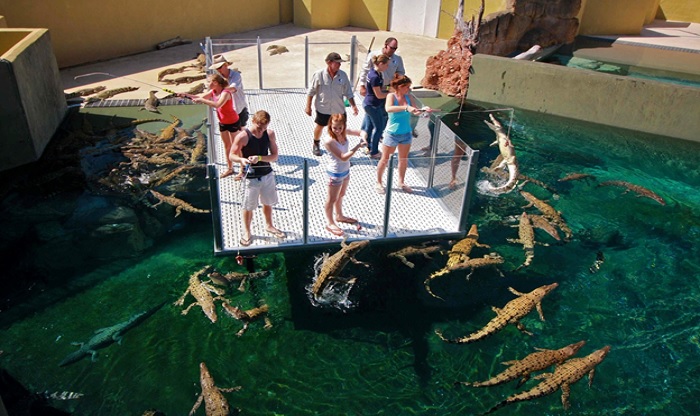 3. Love Land, Jeju Island, South Korea
Though promoted by the owners as an adult theme park, Love Land, on South Korea’s Jeju Island is more of a garden filled with sculptures. Now if you think why we are calling a display of art weird, let’s quickly jump straight to the point. These sculptures aren’t just any statues; all of them in fact display some form of eroticism. Starting from all the sexual positions mentioned in the Kama Sutra, to some mindless effigies, you name it, and Love Land has it. It’s not just the 140 sculptures that attract visitors from all across the globe. The theme park even screens sex education movies for those who are newlywed. The entire place might look vulgar and obscene, but it sure does draw in large crowds. 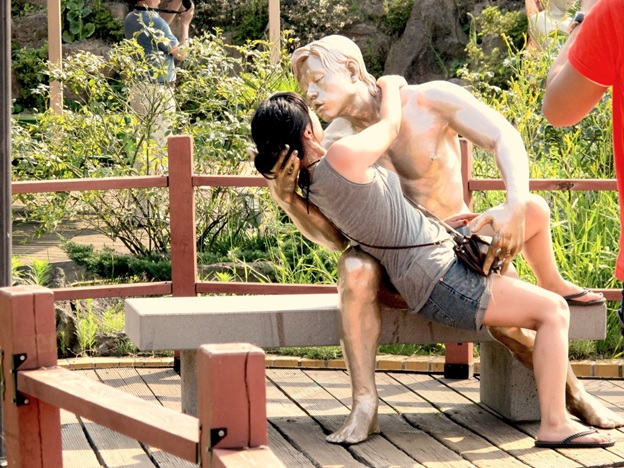 4. KidZania, Worldwide
Though owned by a Mexican company, branches of KidZania have been set up in 24 locations around the world, including Dubai, India, London, and Kuala Lumpur amongst others. This family entertainment center provides an opportunity to children to live one day in their lives as an adult. The entire park has been built as a city for kids, with miniature hospitals, fire stations, banks, offices, restaurants, police stations, residential houses and an airport. While the children drive in cars specially made for them, they can attempt serious role-playing that will help them in future. They have to perform certain tasks, each of which takes approximately 25 minutes. For each job that’s done well, they are paid in the currency kidZos, which they can use for transactions at shops, eateries and other places. The options available are plenty; while some can try dentistry, others can ride a plane or run a restaurant, or even deliver mail. Quite an interesting idea, isn’t it? 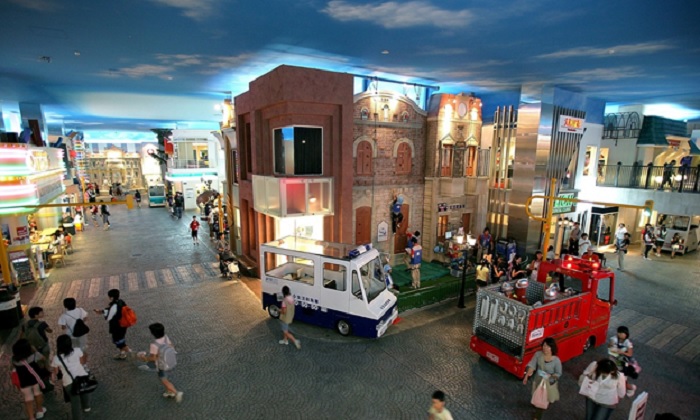 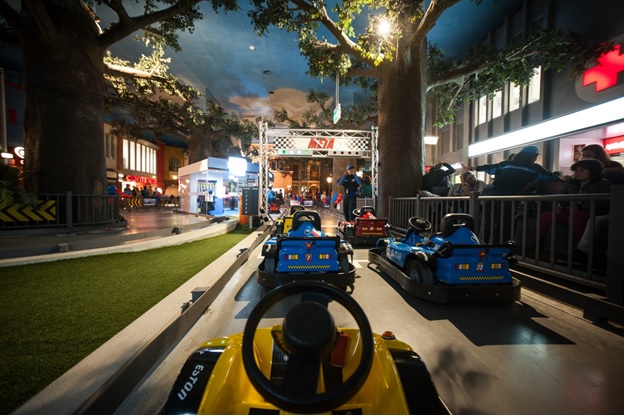 5. DiggerLand, UK
With four parks across the whole of the United Kingdom, Diggerland has shown a lot of success and gained immense popularity despite being one of the craziest theme parks in the world. The entire area is filled with construction equipment and vehicles that look too dangerous to handle. A visitor is allowed to ride around the park the whole day on tractors, cranes and trucks, all without a license. Claiming itself to be the “ultimate adventure park experience”, Diggerland’s unique selling point isn’t just the fact that children can get themselves dirty by scooping out mud with their mini excavators. They can also go on scary rides that have been built out of various construction vehicles. The Spin Dizzy, where people sit in the bucket in front of a JCB digger and get spun around for quite some time, is in particular a favorite with guests. Just writing about is making me dizzy right now…

6. Išgyvenimo Drama, Lithuania
Also known as the Soviet Bunker, just because Išgyvenimo Drama is too difficult to pronounce, this Lithuania entertainment park gives you an almost real-life experience of how citizens of USSR spent their lives in the 1980s. In the two and half hours that you would be spending there, be prepared to wear gas masks, get ordered around by foul-mouthing, tyrant guards, have yourself sniffed by dangerous dogs, be interrogated as if you were a most-wanted war offender, get forced into signing false confession reports. The owners of the Soviet Bunker make it a point to ask guests to sign a waiver form before they enter the premises, because of the harrowing experience that await them. Once you successfully complete your adventure, you are awarded with congratulatory shot of vodka. 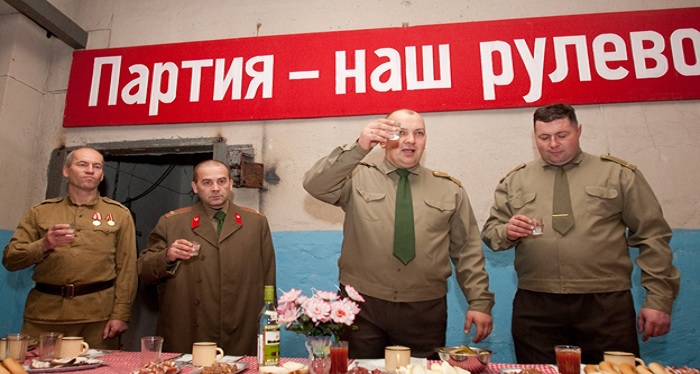 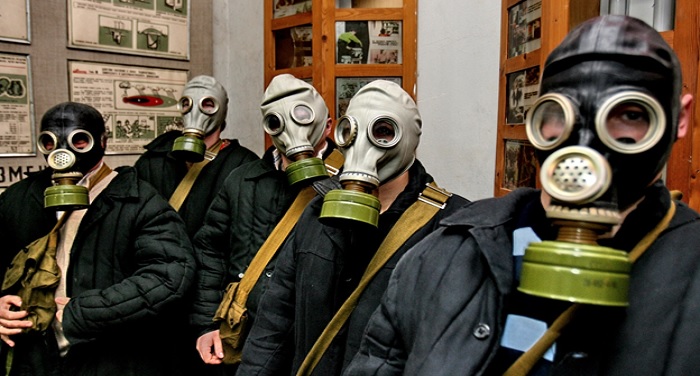 7. Dickens World, UK
Are you a bookworm who just can’t get enough of ‘David Copperfield’, ‘The Christmas Carol’ and ‘Oliver Twist’? If your answer is an emphatic yes, then it’s probably time you stepped out of your reader mode and plunged straight into some real Charles Dickens action. Dickens World in Chatham, England will transport you back in time, where you will get a chance to spend some quality time in London as it was during the Victorian age. The day would include an interactive tour for a span of one and a half hours, where you get to meet actors who have perfected the English cockney accent. Visitors who step inside get to feel how it would have been if they had lived in this beautiful city that once consisted of dingy lanes and run-down buildings. A commendable effort no doubt, but definitely weird! 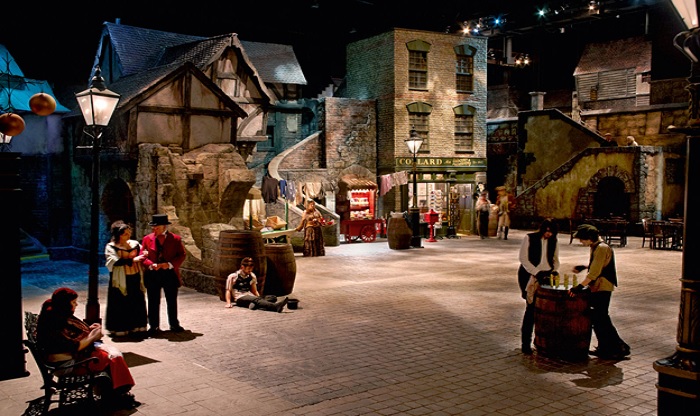 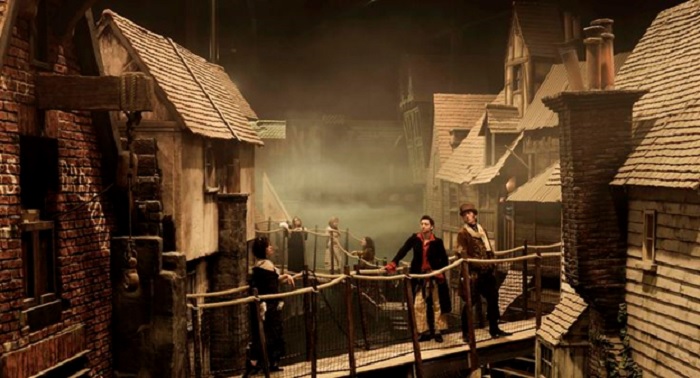 8. Dwarf Empire, Kunming, China
The Dwarf Empire in Kunming is weird, because all you will see are dwarves. The staff in this amusement park comprises of Lilliputians, who have been hired to perform for you. They reside in mushroom-shaped quarters that have been built specially for them, and make their appearances twice a day on stage to sing, dance and act for you. In case you’re wondering if that’s really entertaining, trust me, this place is crowded with visitors every day. 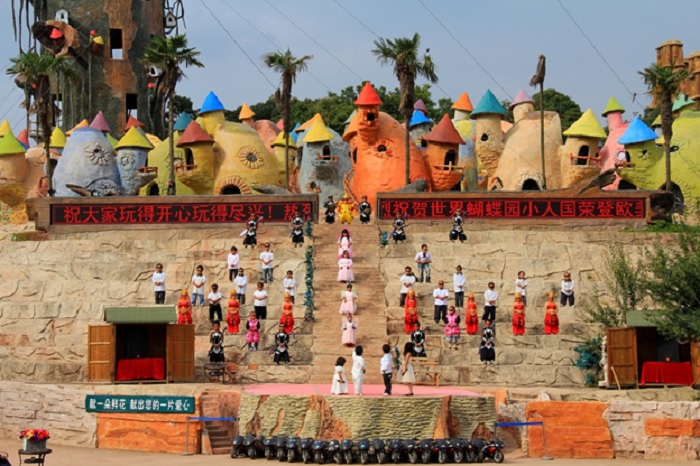 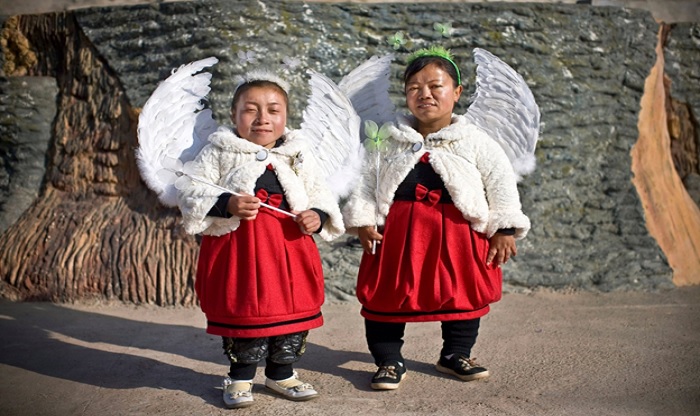 9. Republic of the Children, La Plata, Argentina
If you want to live life Gulliver style, then Republic of the Children in La Plata, Argentina, is the place you need to be in…right now! This bizarre theme park incorporates an entire tiny city inside its premises. This tiny city encompasses state-of-the-art facilities such as a movie theater, an airport, a church, hotels and eateries, a court of law and parking spots. There’s only one small problem—you might not fit into any of these. Constructed in the early 1950s, the owners of this fun center claim that Disneyland was inspired by this amusement park. 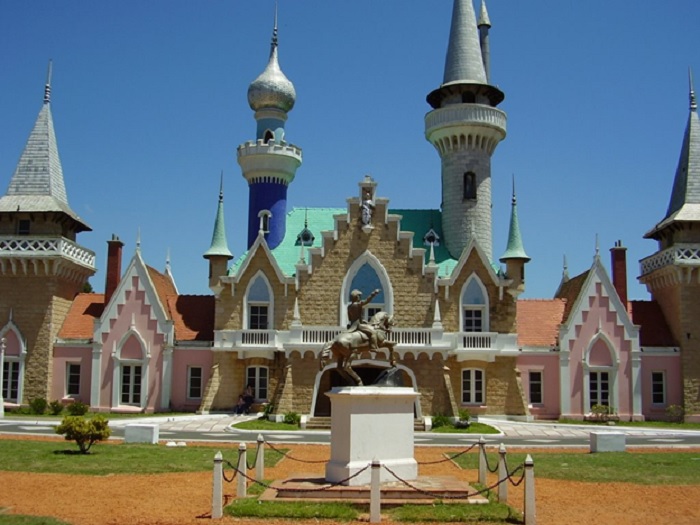 10.  Haw Par Villa, Singapore
Have you ever wondered how the Chinese imagined hell to be? How Par Villa in Singapore brings their beliefs to life, with scenes and sculptures depicting folklore and mythology from Chinese, Buddhist, Confucian and Taoist cultures. Be warned though, that in case you are looking for a fun and relaxing day at a theme park, the How Par Villa isn’t the right choice. The imageries presented in this place can be quite disturbing and gruesome. The exhibits and statues on display include soldier monkeys handling guns and crabs that have human heads. Prepare to be completely grossed out when you enter the Ten Courts of Hell. You will be welcomed with scenes of torture—bodies cut into half, burning of people in cauldrons, men being stabbed with spears, and rats eating human organs. That, according to oriental legend, is how sinners are treated in hell. 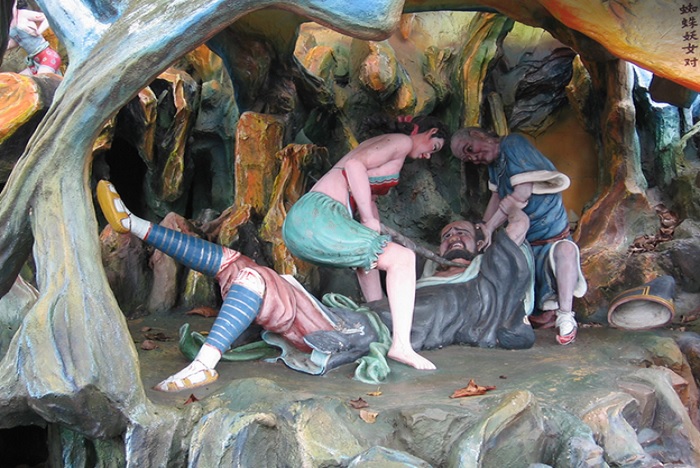 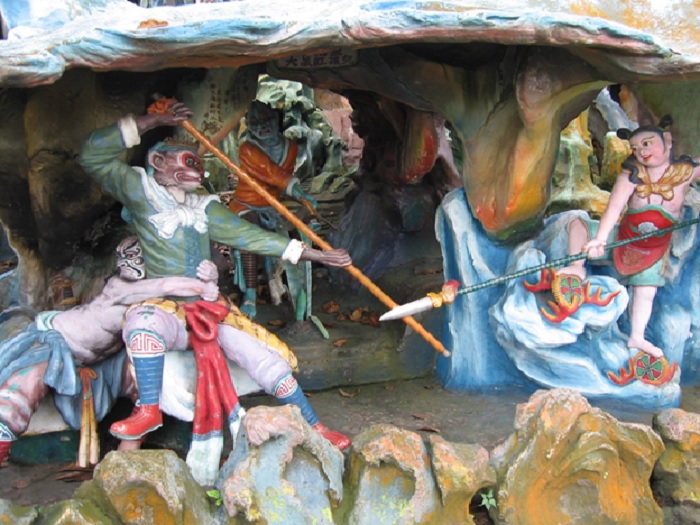 Stumble
Do you think anything can get weirder than this? I doubt.