Top 15 Tourist Places in Kerala You Must Visit

While planning a week-long trip to South India, Kerala is one of the places that definitely strike a chord with travel enthusiasts. The serene backwaters, hundreds of acres of coconut groves and the clear blue waters of the Arabian sea, makes the tourist spots in this southern state seem more like places straight out of landscape paintings. Many palaces, forts and other monuments of great historic importance are situated in this state, which was once governed by the royal family of Travancore. Apart from tourists from different parts of India, many travellers from across the world flock Kerala to get a glimpse of its beauty. Here are the top 15 tourist places in Kerala which you must visit if you intend to explore this state situated deep down south west of India. On a lighter note, the state is quite humid during the summers and it might help a great deal to carry sunscreen while traveling.

1. The Backwaters Of Kumarakom
A trip to Kerala is incomplete without a cruise along its enchanting backwaters. The serene Kumarakom village is situated against the backdrop of the picturesque Vembanad Lake, in the Kottayam district of Kerala. Many resorts here offer luxurious boat houses, with interiors that are no different from the plush suites of star hotels. Sailing on a house boat along the green waters of the Vembanad and viewing the thick cover of coconut groves on both sides, has been a memorable experience for many, especially the honeymooners. Kumarakom is frequented by tourists during the period between Novembers to February, since it is not as humid as the summers. It is approximately hundred kilometers from Kochi and can be accessed by road easily. 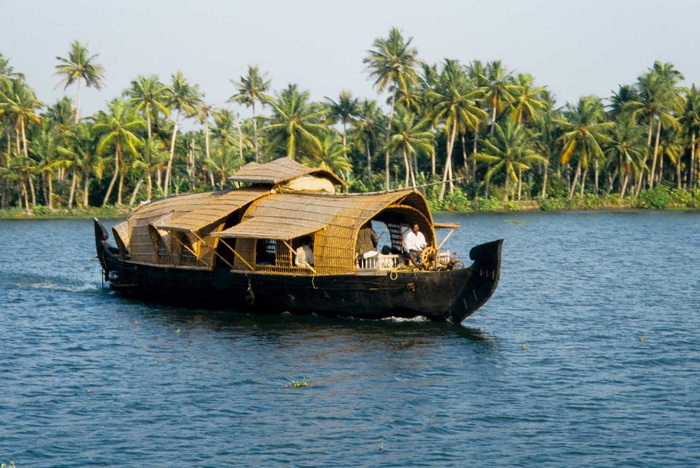 2. Athirapally Waterfalls
The breathtaking Athirappilly waterfalls, has been one of the preferred destinations of various renowned filmmakers from India, who have captured many important sequences of their flicks here. This cascading natural wonder is also surrounded by lush green forests, which is home to endangered species such as Tigers, the Asian elephants and even leopards. The Wildlife authorities have even arranged safari tours in the area in a bid to promote ecotourism. This pearl of the scenic Western Ghats is located around 70-kilometers away from Kochi. 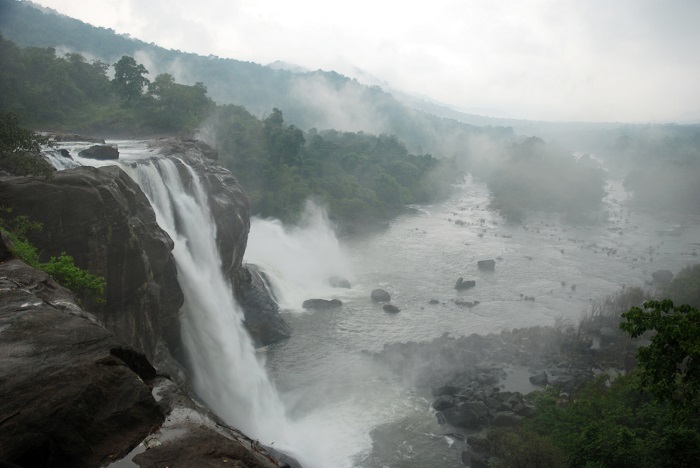 3. Thekkady
The Thekkady region perched on the lap of the Periyar national park is a paradise which every wildlife lover needs to explore on his/her trip to Kerala. Tourists visiting Thekkady usually enjoy a cruise along the Periyar River which flows across the national park. In addition, one can also explore the nearby jungle, which is a home to Royal Bengal Tigers and Asiatic Pachyderms, through wildlife safaris. Other attractions in the vicinity of Thekkady are places like Chellar Kovil, Murikkady and Anakkara. Thekkady is located at a distance of 145-kilometers away from the Cochin International Airport. 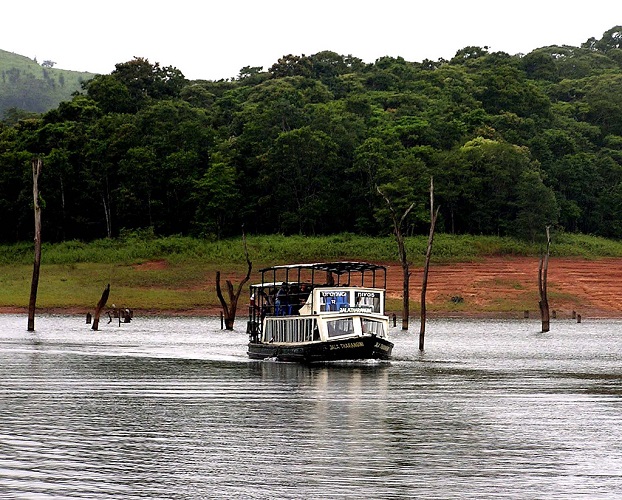 4. Bekal Fort
In the northern most district of Kasaragod, which is situated in the border region of the Karnataka and Kerala states, is an archaic structure named Bekal fort. Celebrated as the largest fort in the whole of Kerala state, the Bekal, faces the Arabian Sea and is spread over approximately 50-acres. Constructed by an ancient Indian warrior named Shivappanayaka of the Keladi Nayaka dynasty, the fort’s highlight is its tank and a long flight of steps. The fort also has a tunnel made to expedite escape in case of emergencies. The Bekal fort is around 60-kilometers away from Mangalore city in Karnataka and approximately 170-kilometers north of Calicut. This ancient site is open to the public throughout the year. 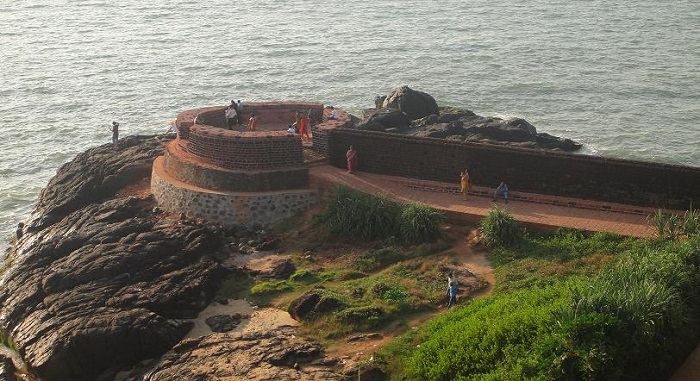 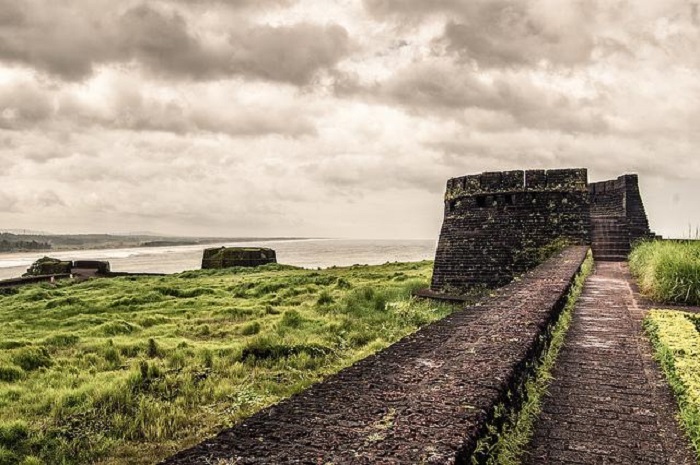 5. Muzhappilangad Drive-In Beach
Situated in a sleepy coastal village, in the Kannur district of North Kerala, the Muzhappilangad beach is a haven for many motorists. This stretch, spread over a distance of 5-kilometers, is known as ‘the longest drive-through beach in India’ and one of the very few of its kind in the world. The nearest airport to Muzhappilangad is the Calicut International airport. Tourists who visit this beach also have options in extreme adventure like parasailing and paragliding. 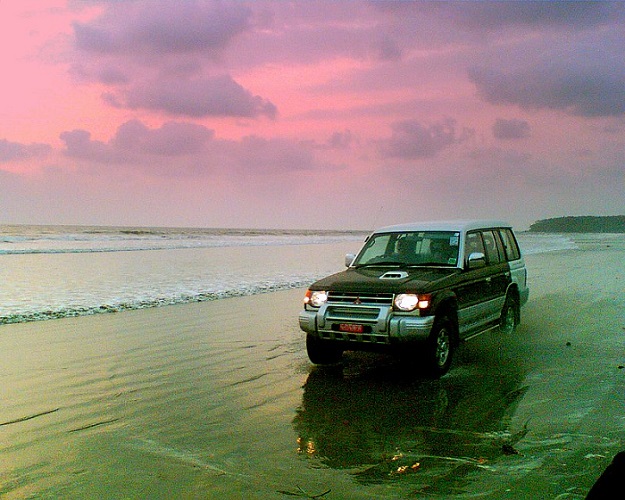 6. Chembra Peak
The charm of the lush green Wayanad hill station allures thousands of people who visit Kerala, to explore this serene region of the Western Ghats. Although the district boasts of many tourist attractions, the most prominent of the lot is the Chembra peak, which is situated at a height of 2100-meters above sea level. After reaching its summit, one gets to witness a heart-shaped lake known as ‘Hridaya Saras,’ which is truly one of its kind and seldom found in other parts of Kerala. One needs to gain the permission of the forest officials before scaling this hill. It would take approximately 3-hours to conquer the peak, which opens to a panoramic view of the neighboring Calicut and Nilgiri districts. The railway station which is closest to Wayanad is in the coastal city of Calicut which is 72-kilometers away. Wayanad is easily accessible by road too. 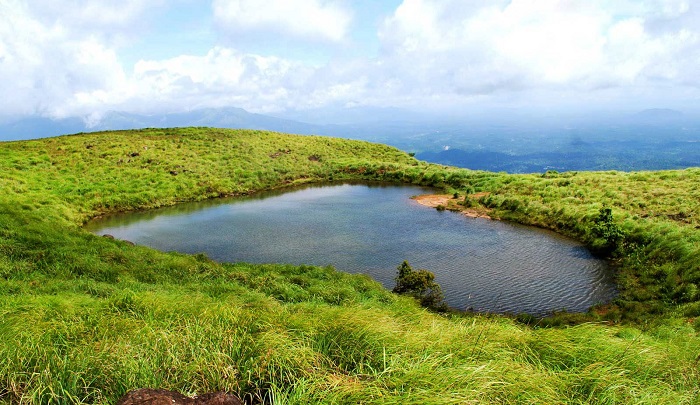 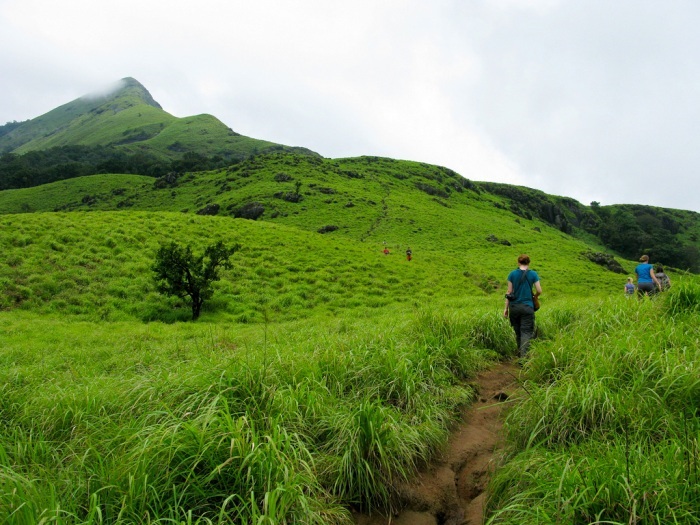 7. Fort Kochi
The city of Kochi, hailed as the ‘Queen of the Arabian Sea’ is one spot on the Kerala map which a traveller can’t afford to miss. The famous Chinese fishing net structures, facing the sea, which have served as the picture of many postcards, is situated in this coastal city. Sipping a cup of tea and enjoying the sunset at Fort Kochi is perhaps one of the greatest sights in this southern Indian state. One can find many interesting cafes and themed restaurants at the surroundings of Fort Kochi which offer authentic sea food. 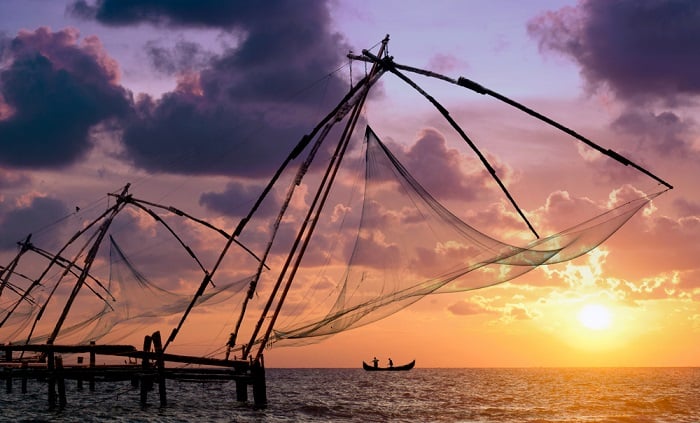 8. Tea Estates Of Munnar
The breathtakingly stunning natural spots of Munnar have been alluring tourists from around the world for decades. The hill station is located at a height of more than 5000-feet above sea level. The cloud kissing hills and the lush green tea plantations are a true delight to photographers. The hill station is blessed with abundance of flora as well as fauna and many national parks that preserve the nature is also found here. The ‘Neelakurinji,’ a type of flower which blooms once in twelve years, is found here in abundance. 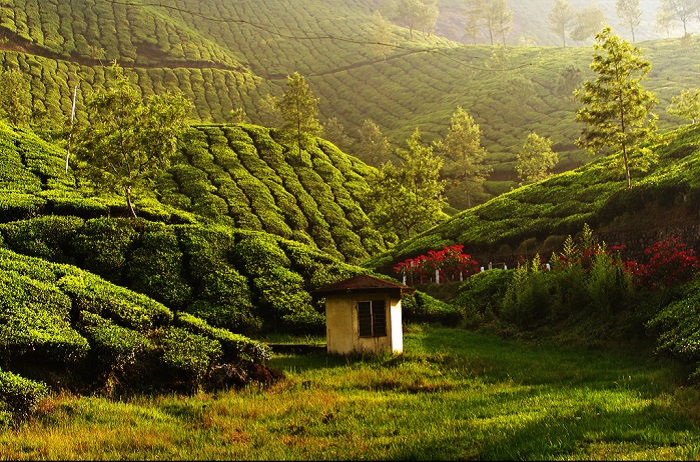 9. Anantha Padmanabhaswamy Temple
The temple which took the whole country by storm in 2011, due to its abundance of wealth, is situated in the capital city, Thiruvananthapuram. In fact, the city got its name from this famous shrine, which has now been declared as the richest temple in the whole country. The main deity, Anantha Padmanabhaswamy, a form of Lord Vishnu resting on the body of a serpent is made up of gold. The temple consists of chambers consisting millions of gold coins and other collectibles. One such chamber, however, is locked and it’s superstitiously believed that opening this secret room would lead to the devastation of the entire city. 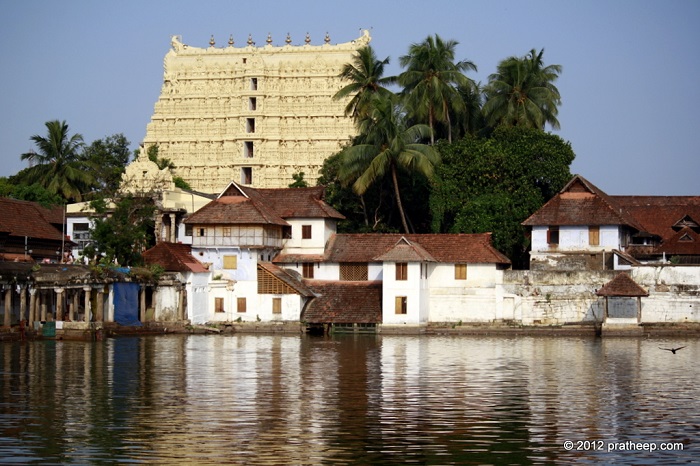 10. Eravikulam National Park
Amongst one of the few must-see spots in the Munnar hill station, is the Eravikulam national park, which is the habitat of many predators like the Wild dog, Wild Jackal, Leopards, Jungle cats and Pachyderms. One of the main attractions of Eravikulam is the Anamudi peak, which is considered the highest in the whole of southern India. The international welfare organization, UNESCO has declared this national park as a world heritage site. 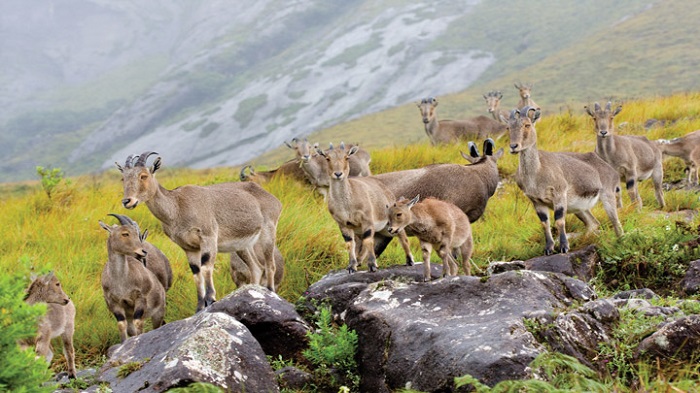 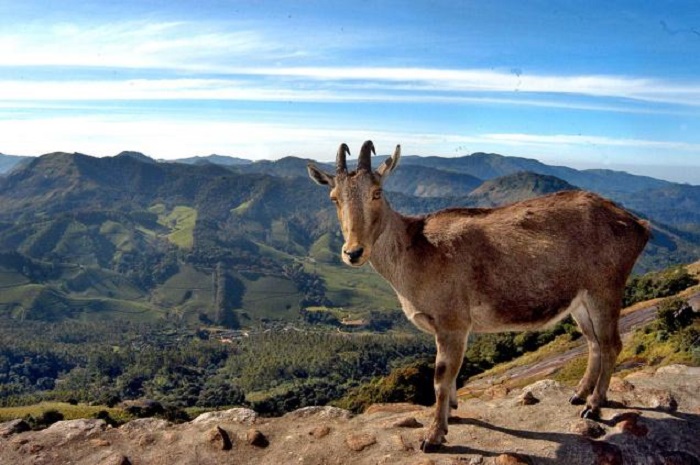 11. The Paradesi Jewish Synagogue, Kochi
Apart from the Chinese fishing nets, the age-old ‘Paradesi’ Jewish synagogue situated in the old Kochi region is one of the most popular religious monuments in the entire country. Constructed in 1567, it is also the oldest place of Jewish religious interest to be found in any commonwealth nation. The synagogue is situated well-within the confines of Kochi city. 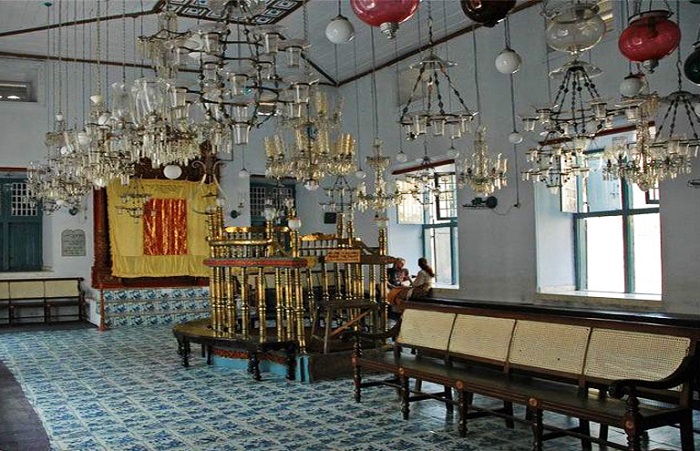 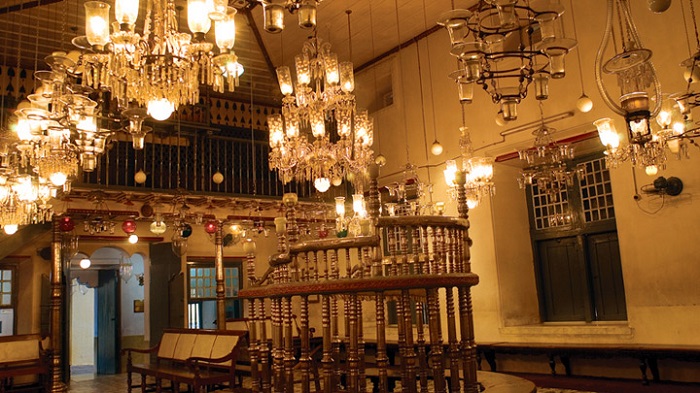 12. Kovalam Beach
Kovalam is no different from the picturesque beaches of Goa, and is a favorite among foreign tourists who visit the state. Located at a distance of around 16-kilometers from the capital city of Thiruvananthapuram, the Kovalam is a perfect spot to stretch your legs and relax. Huge rocks are distributed across the shores of the beach and amidst them is a towering light house, adding to the beauty of Kovalam. The beach is also situated against the backdrop of scores of coconut trees, which contribute greatly to the scenery. 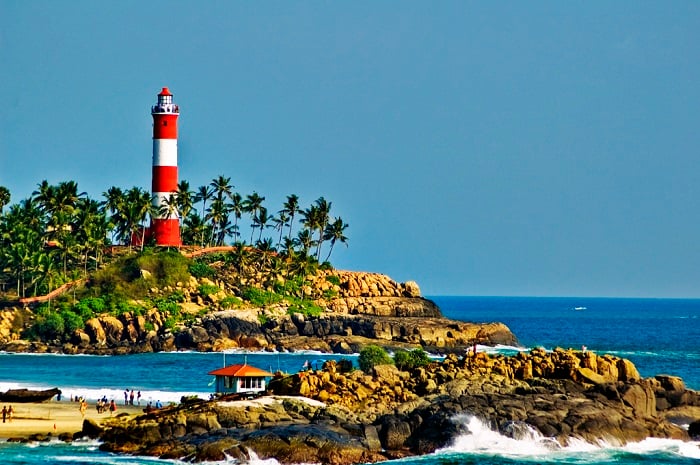 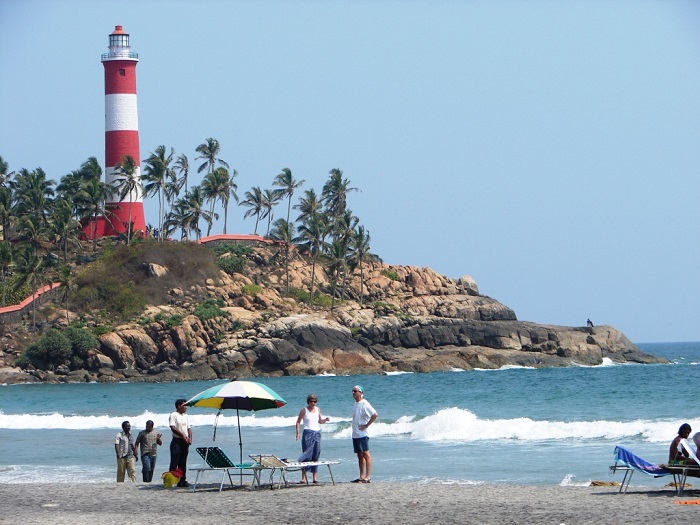 13. Puthen Malika Palace
This royal monument, which is more than 170-years old, is situated in Thiruvananthapuram. It is also locally known as the ‘Kuthira Malika,’ which translates to the ‘Palace of Horses.’ Constructed by Swathi Thirunal Rama Varma, one of the 19th century Maharajas of Travancore, Puthen Malika has 122 horses inscribed on its Teakwood exteriors. A section of this palace has now been converted into a museum and artifacts of the bygone era mainly belonging to the Travancore royal family is being preserved here. 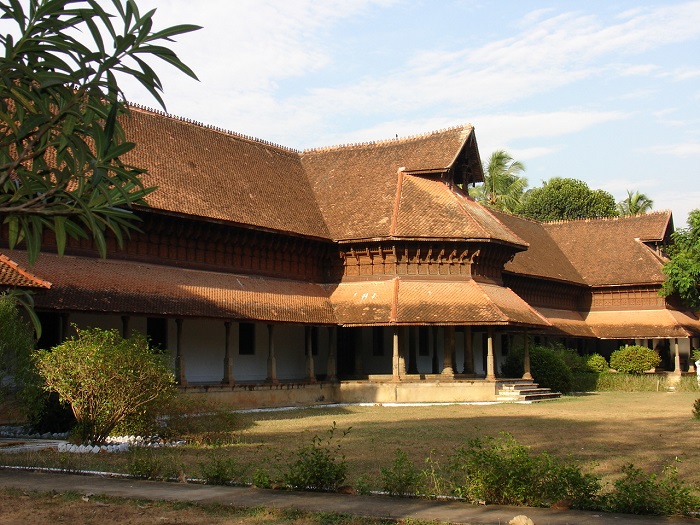 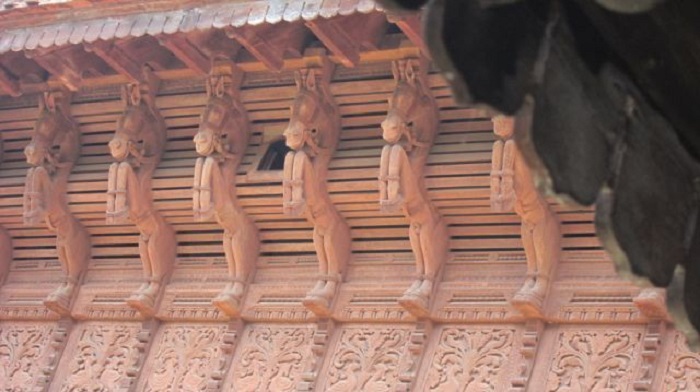 14. Varkala Beach
Varkala Beach, located near Thiruvananthapuram is the only spot in the whole state, which is situated below a towering cliff. This beach is also known as ‘Papanasam’ and many claim that a dip in its waters washes one’s sins away. Many shacks are located alongside the Varkala beach, which offer coastal cuisine. The ideal time to visit Varkala is post the monsoon season. 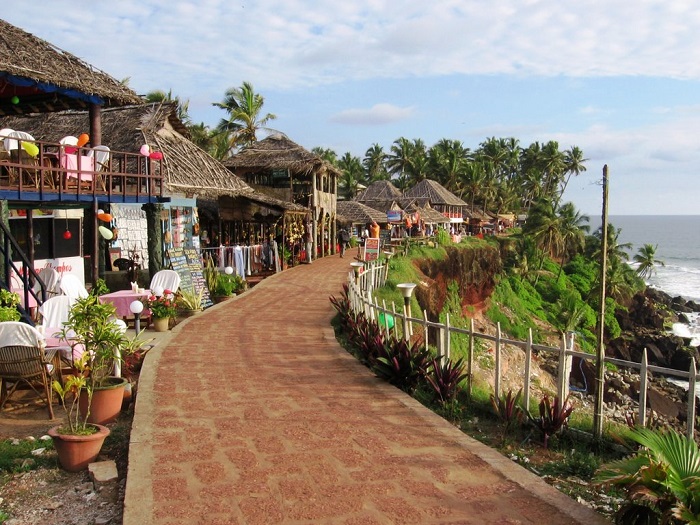 15. Lake Temple, Ananthapura
This temple, engulfed by the waters of a 300-feet deep serene lake, is situated in the Kasaragod district, towards the northern most tip of Kerala. It is believed that the temple is where the deity Anantha Padmanabhaswamy of Thiruvananthapuram had first settled before moving to the much popular abode in the capital city. However, the main attraction of the shrine is a crocodile named ‘Babiya’ who is often spotted floating on the lake’s surface. It is said that Babiya is immortal and the moment one dies, another crocodile of the same size resurfaces at the lake the very next day. It is said that Babiya grants the wishes of the devotees who visit this shrine. There is also a secret passage within the temple which apparently helps one reach the Anantha Padmanabhaswamy temple of Thiruvananthapuram. The temple is approximately 200-kilometers away from the city of Calicut and around 380-kilometers north of Kochi. 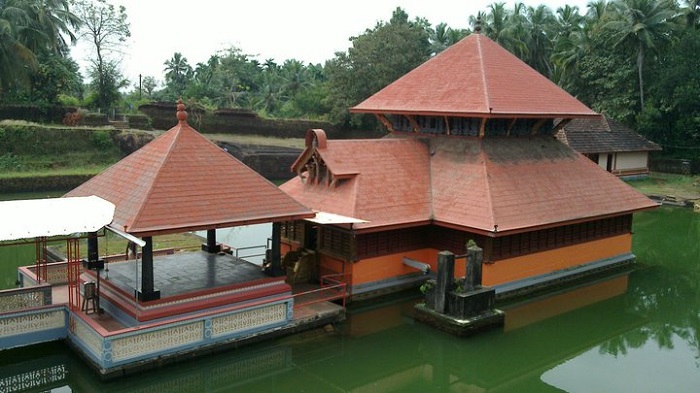