Life is full of ups and down, where you’re laughing one moment, the very instance you turn around the corner, you come face-to-face with sorrow. Charlie Chaplin, one of the greatest comic actors of all time, once rightly said, “Life is a tragedy when seen in close-up, but a comedy in long-shot.” That is precisely the reason why comedy movies exist—to help us deal with the tragedies of life. For those 3 hours, we are glued to the film; we get into the skin of the characters on our screen, living their funny lives, forgetting all about the stress we deal with each day. And if you are a Bollywood fan, look no further, because the Hindi film industry provides many opportunities to look back at life with mirth rather than anger. If you want to unwind and laugh your guts out, here are twenty of the most famous Bollywood comedy movies of all time. Have fun!

This comedy film directed by Rajkumar Santoshi shot Aamir Khan, Salman Khan, Karishma Kapoor and Raveena Tandon to stardom, as it became a cult movie in its genre. This film about mixed identities and the usual wooing of the rich man’s daughter bagged several awards and became so popular that it was remade as Ullathai Allitha in Tamil. 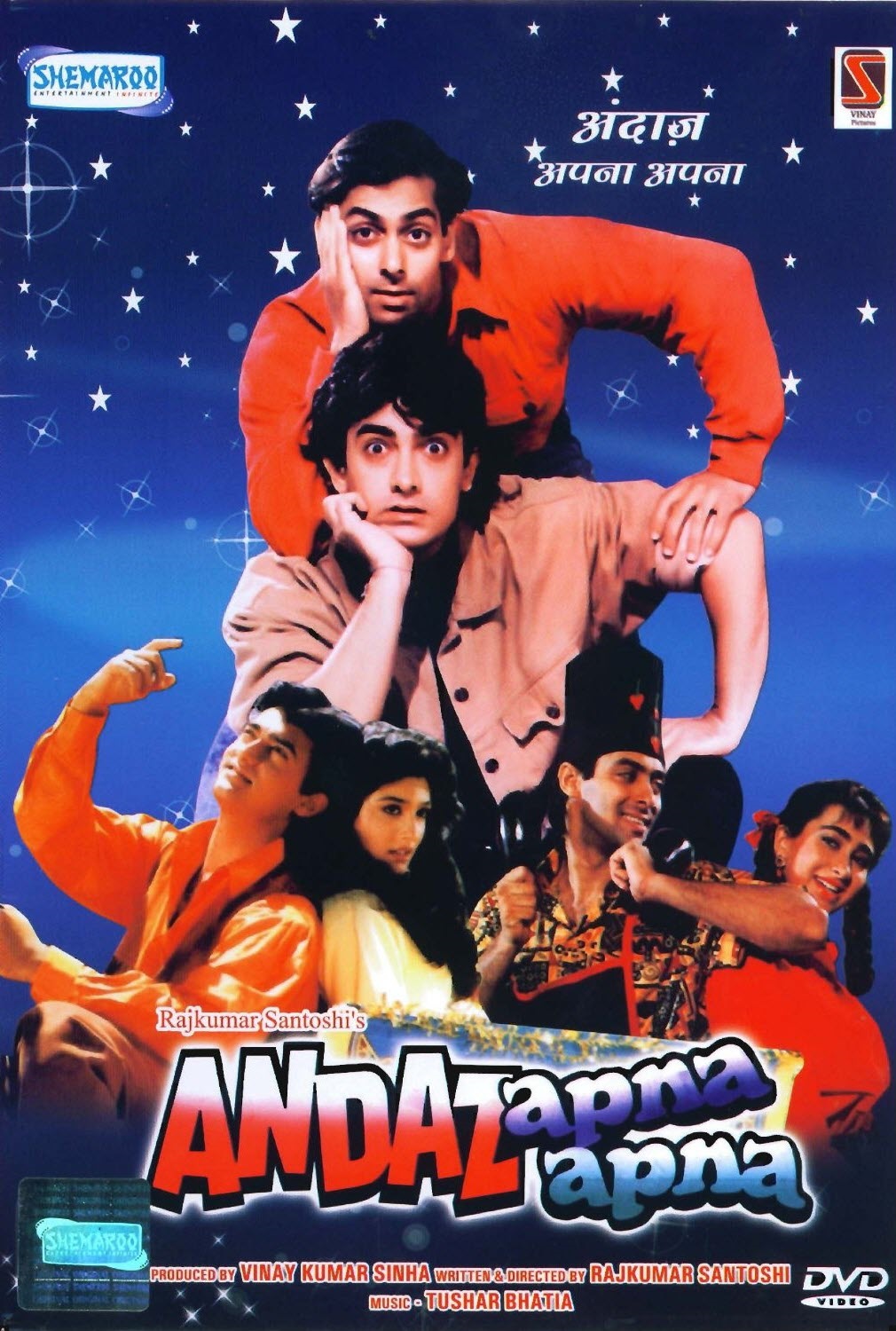 This 1975 hit movie starring Amitabh Bachchan, Dharmendra, Sharmila Tagore and Jaya Bhaduri in the lead roles, hit the jackpot with its viewers. Based on the equally popular Bengali movie Chhadmabeshi, the Hindi remake translated into a laughter riot, with an unforgettable performance by veteran actor Om Prakash. 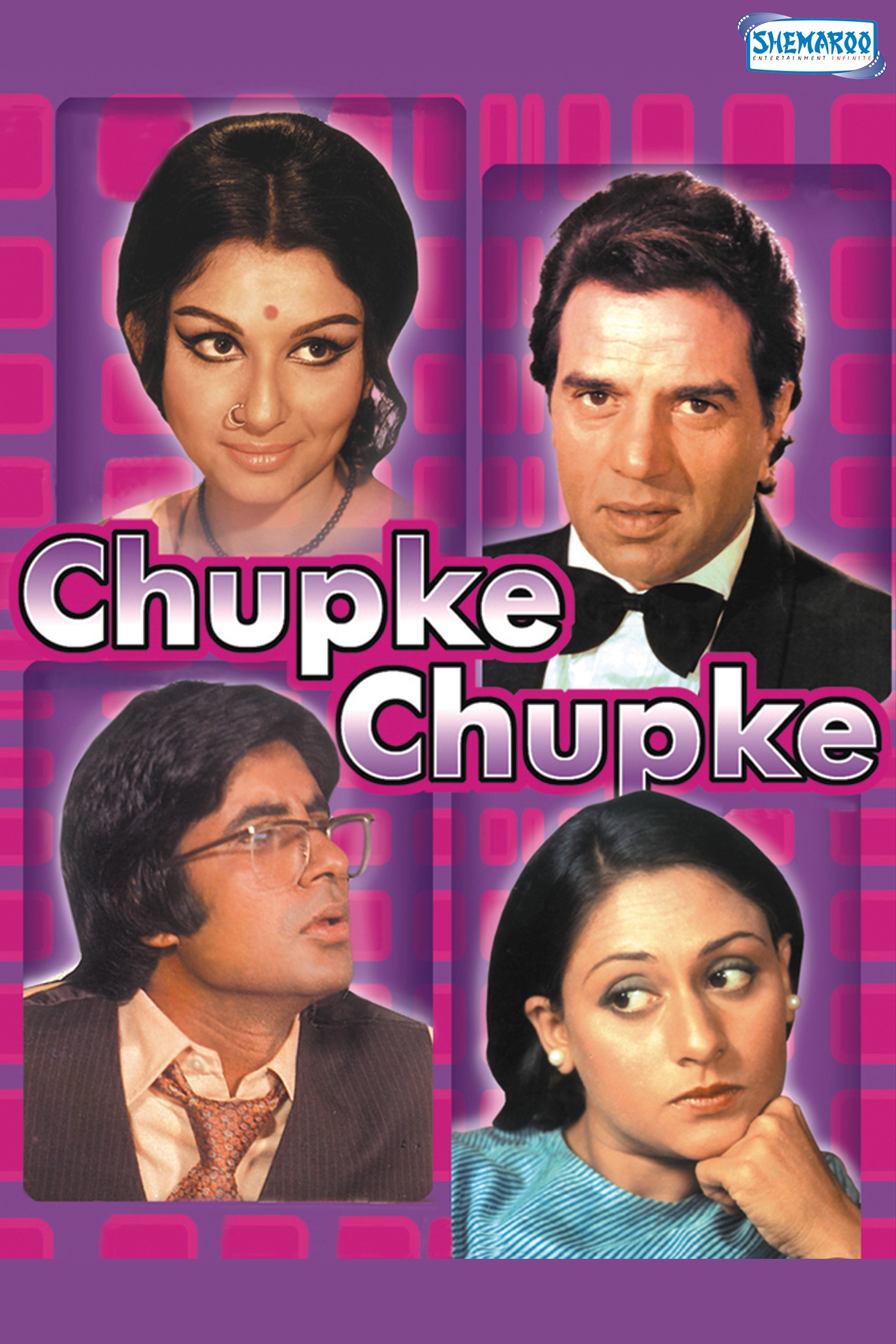 Priyadarshan’s blockbuster, Hera Pheri is one of those movies that would feature amongst the most popular comedies ever. Paresh Rawal, Akshay Kumar and Suneil Shetty play three penniless roommates with hearts of gold, who are forced to play a major part in kidnap heist. What follows is a feel-good comedy with a thriller at the center of its plot. The movie was based on a Malayalam film by the name Ramji Rao Speaking, and its popularity led to a sequel, Phir Hera Pheri. 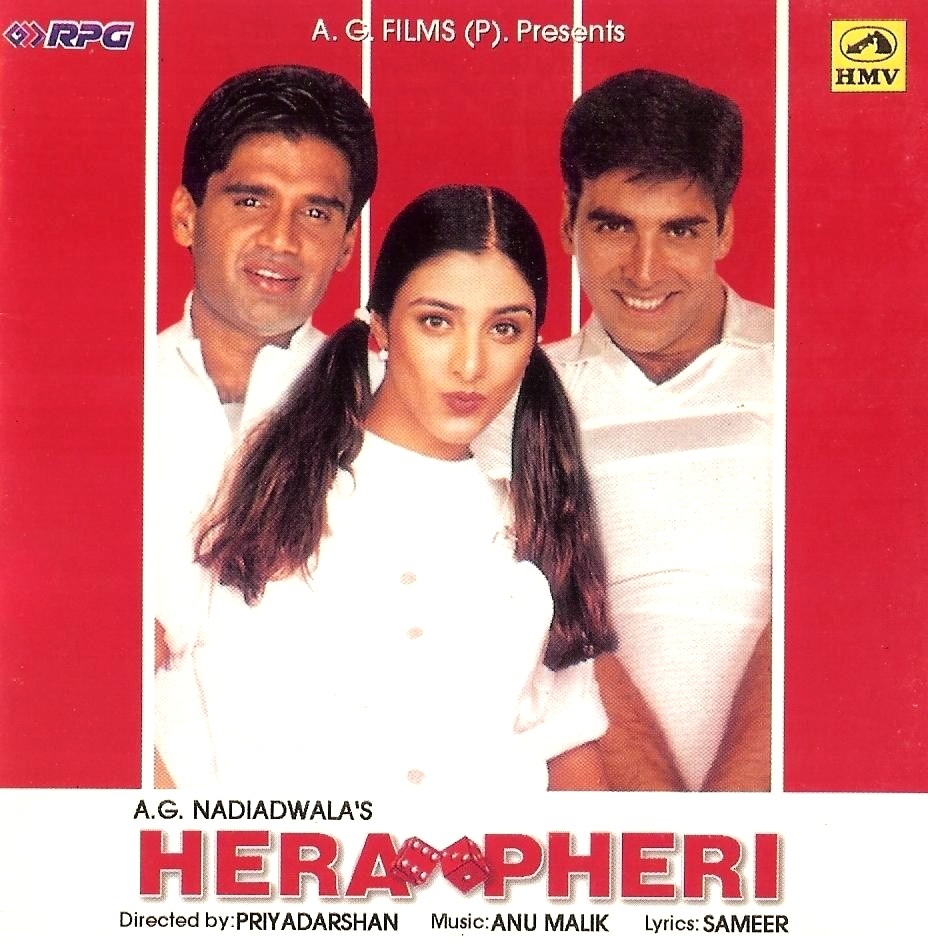 An Amol Palekar and Utpal Dutt gem, Gol Maal, directed by Hrishikesh Mukherjee, takes us on the journey of a middle-class man who disguises himself in the hope of getting employed. What works are the witty one-liners, stellar performances by both Dutt and Palekar, and the simplicity with which Mukherjee weaves his tale. This film is all about chaos and it does justice to its song, “Gol maal hai bhai sab gol maal hai”… 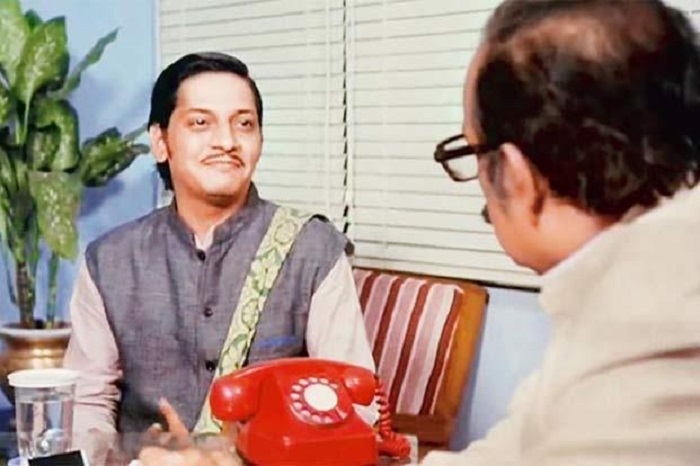 The story of a spoilt brat who learns his lesson after being rejected by his to-be-wife, Raja Babu, which had Govinda in the lead, was a spin off from the Tamil film, Raasukutti. Slapstick comedy from the humor king Govinda, supported quite well by Karisma Kapoor, Kader Khan, and Shakti Kapoor, Raja Babu did well at the box office, despite the controversial songs. 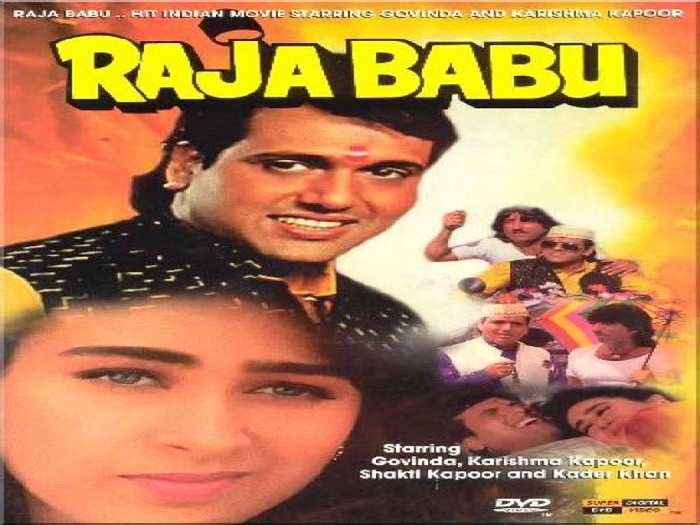 Kundan Shah cast Naseeruddin Shah and Ravi Baswani in the leads of his 1983 film Jaane Bhi Do Yaaro, which went on to become one of the most iconic comedy movies ever made in Hindi. This satirical take on serious issues like politics, media, and the corporate world was done justice by the actors, and it won several prestigious awards. 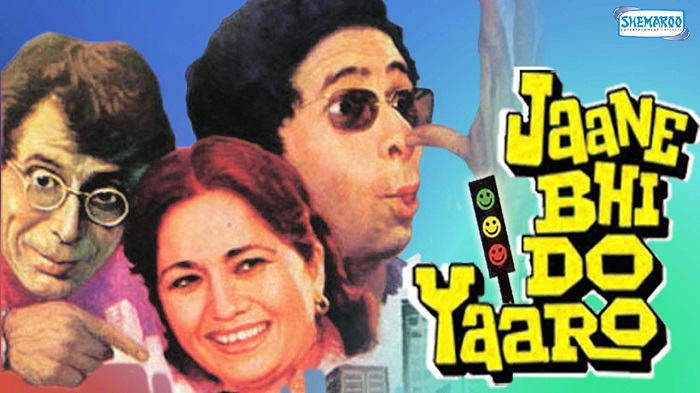 Bombay To Goa was the film that marked Amitabh Bachchan’s entry into Bollywood as a solo lead. Co-starring Aruna Irani, Shatrughan Sinha and Mehmood, this comic flick was a laughter fest on the go, with its songs becoming a hit with the audience. 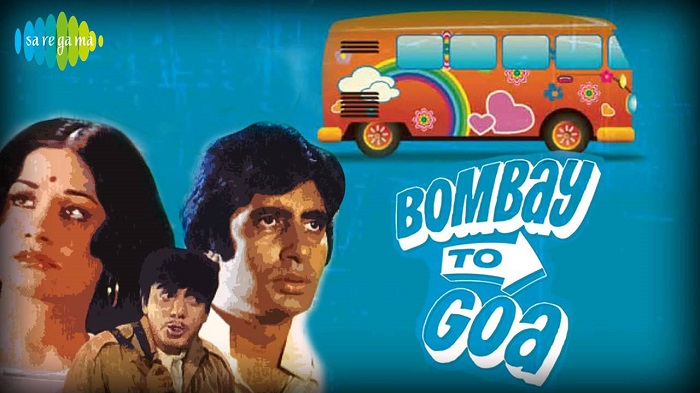 This 2003 blockbuster starred Sanjay Dutt in a comic role that took the actor to new heights. Munnabhai M.B.B.S that documents the journey of a small time gangster who harbors ambitions of becoming a doctor is meant to tickle your funny bone. The movie became such a huge commercial success that it won the National Film Award for Best Popular Film in 2004. 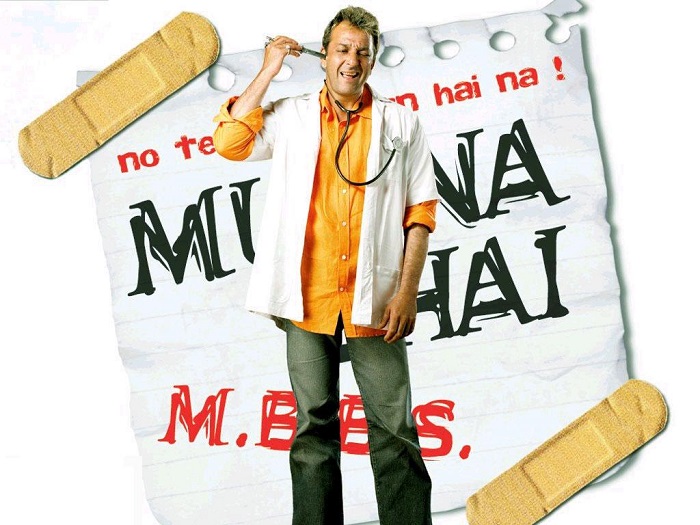 This simple love story about relationships and commitment is woven in a humorous way with an Anglo-Indian family at the heart of the film. Starring Amol Palekar and Tina Munim, the movie has a happy-go-lucky feel that will leave you feeling warm and fuzzy in the end. 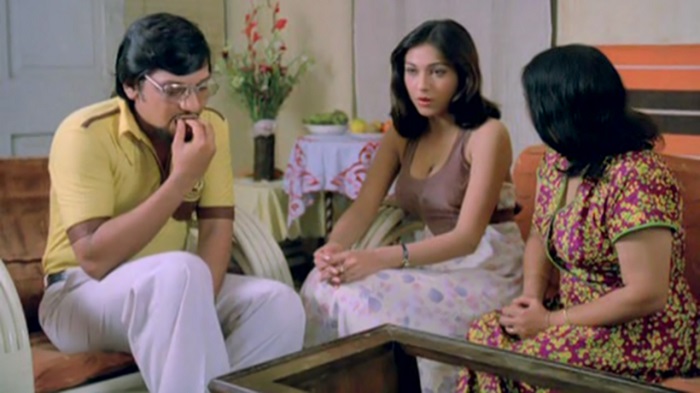 Angoor, is one of the most famous comedy movies directed by lyricist-filmmaker Gulzar. With Sanjeev Kumar and Deven Verma taking the lead, it is a spin off from the Bengali film, Bhrantibilas. With the plot similar to Shakespeare’s Comedy of Errors, this film is meant to be enjoyed with the whole family. 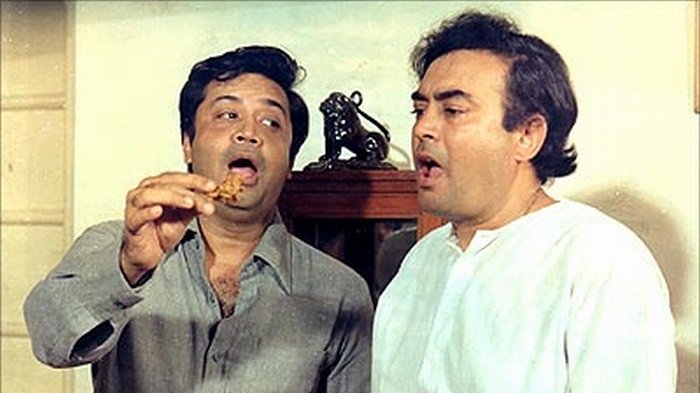 Filmed by Basu Chatterjee as a satire, Chameli Ki Shaadi deals with the depressing caste system, but in a funny way. Displaying top-notch acting skills by Anil Kapoor and Amrita Singh, the film talks about a poor man Charandas’ desire to marry the love of his life, Chameli, and how his plans are thwarted, not just by circumstances, but also by his family. It also made the news for celebrating the will power of women, and Amrita Singh was in particular praised for her mettle. 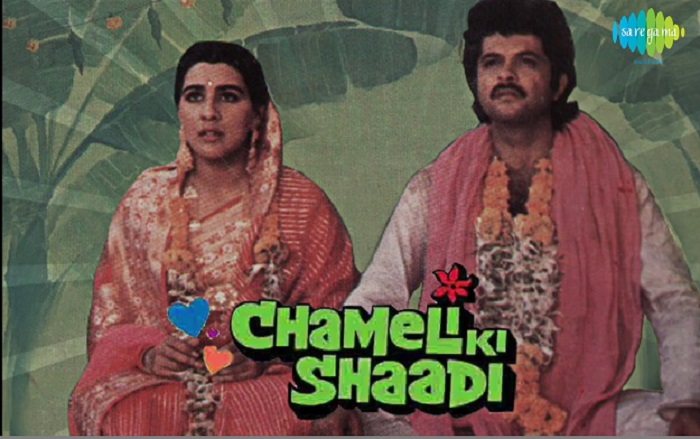 Purely meant for making its audiences laugh, Deewana Mastana shows two men, one rich, the other a thief, fall head over heels in love with one woman. What follows is a roller coaster ride of both men trying to win the love of the lady of their dreams. Who wins her hand is something you have to find out for yourself. 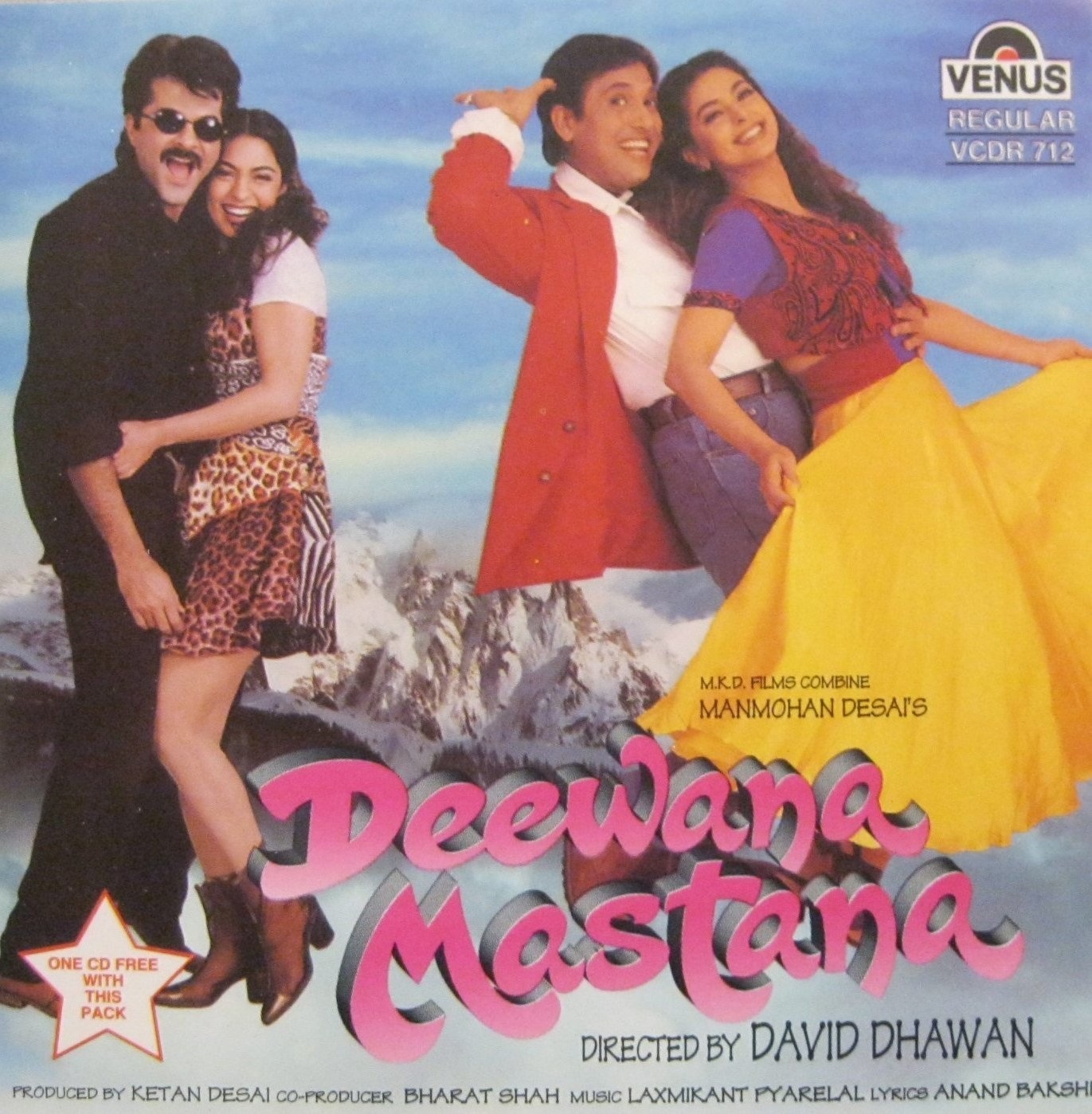 In 1966, a Bengali movie, Galpa Holeo Satyi, took the state by storm, for being one of the most touching comedy movies of all time. Six years later, Bawarchi, a remake, did exactly the same, teaching us to love and care for our families, without an ounce of preaching. Full on laughter, this film hit the mark, with astounding performances by Rajesh Khanna and Jaya Bhaduri. The end result was many more remakes in Tamil and Kannada, and another comic hit, Hero No. 1. 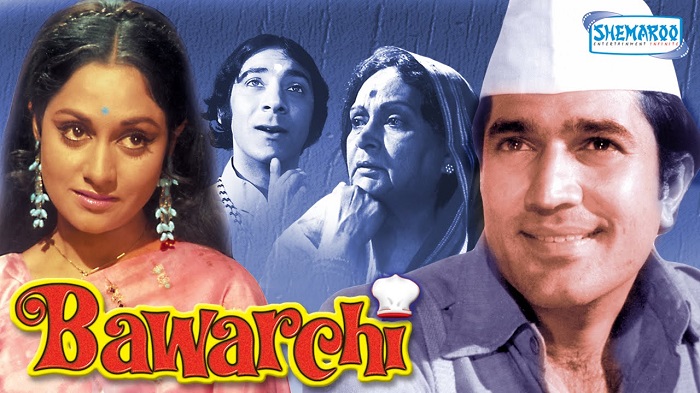 This National Film Award winner for Best Children’s Film in 2011, Chillar Party is solely for children, and yet can melt any adult’s heart. The film contrasts the simplicity and innocence of children with the adult world of dirty politics, which poses a threat to the young ones. 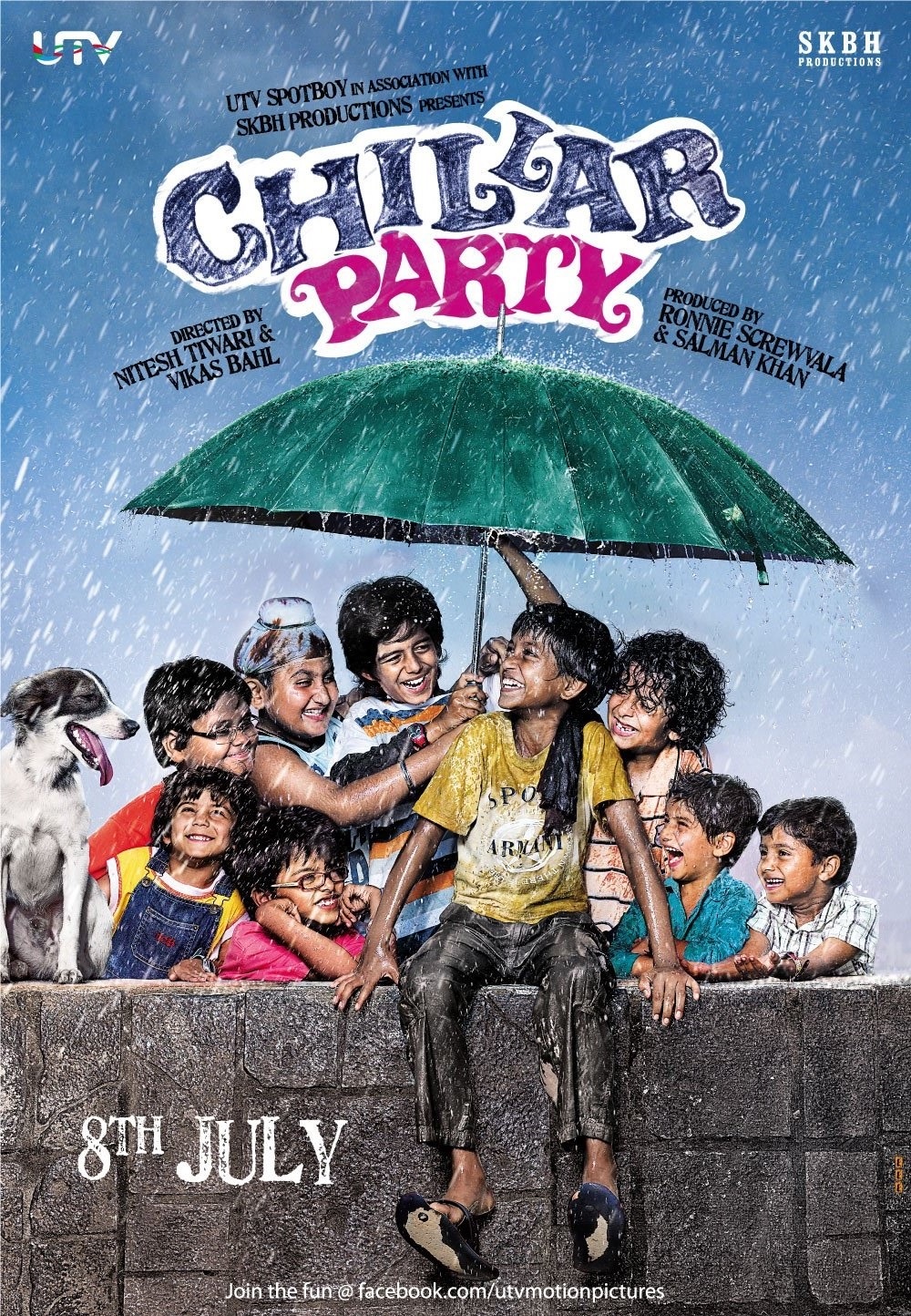 Another fun ride by Basu Chatterjee, Khatta Meetha stars Rakesh Roshan, Bindiya Goswami and Ashok Kumar, amongst a multitude of other famous actors. Hilarious events follow when an elderly man with 4 sons decides to wed a woman having a daughter and two sons from an earlier marriage. 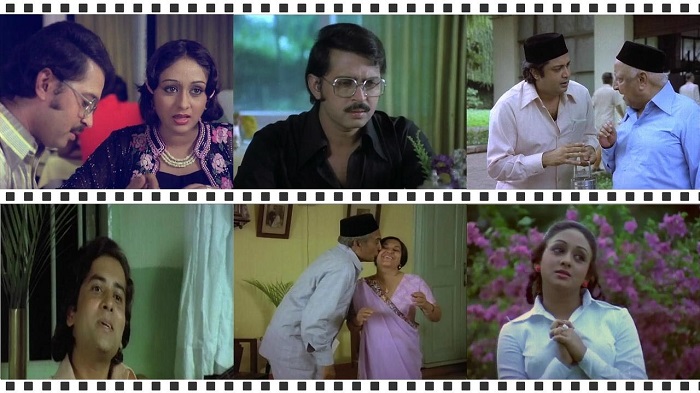 Amol Palekar and Basu Chatterjee, once again! The charming king of comic love stories, Palekar, strikes gold once more with Chhoti Si Baat, where he plays a soft-spoken accountant who hesitates to express his love to a woman named Prabha. When he meets his competition, he has to do everything within his means to get the woman he wants to spend his life with. Ashok Kumar’s character comes to his rescue, advising him on romance all through the film. Amol Palekar created a niche for himself as the hilarious mild-mannered man. 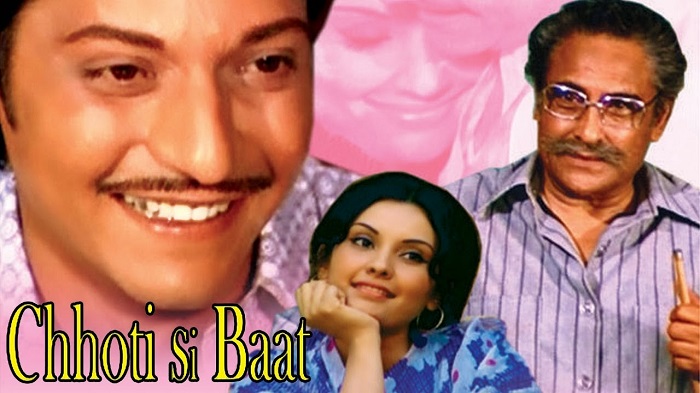 Though quite similar to Robin Williams’ Mrs Doubtfire, the plot is closer to its Tamil counterpart, Avvai Shanmughi. Both the Tamil and the Hindi movies star Kamal Haasan as the male lead who disguises himself as an old lady to win back the love of his daughter and his soon-to-be ex-wife. Chaos ensues as his father-in-law falls in love with the nanny he pretends to be. 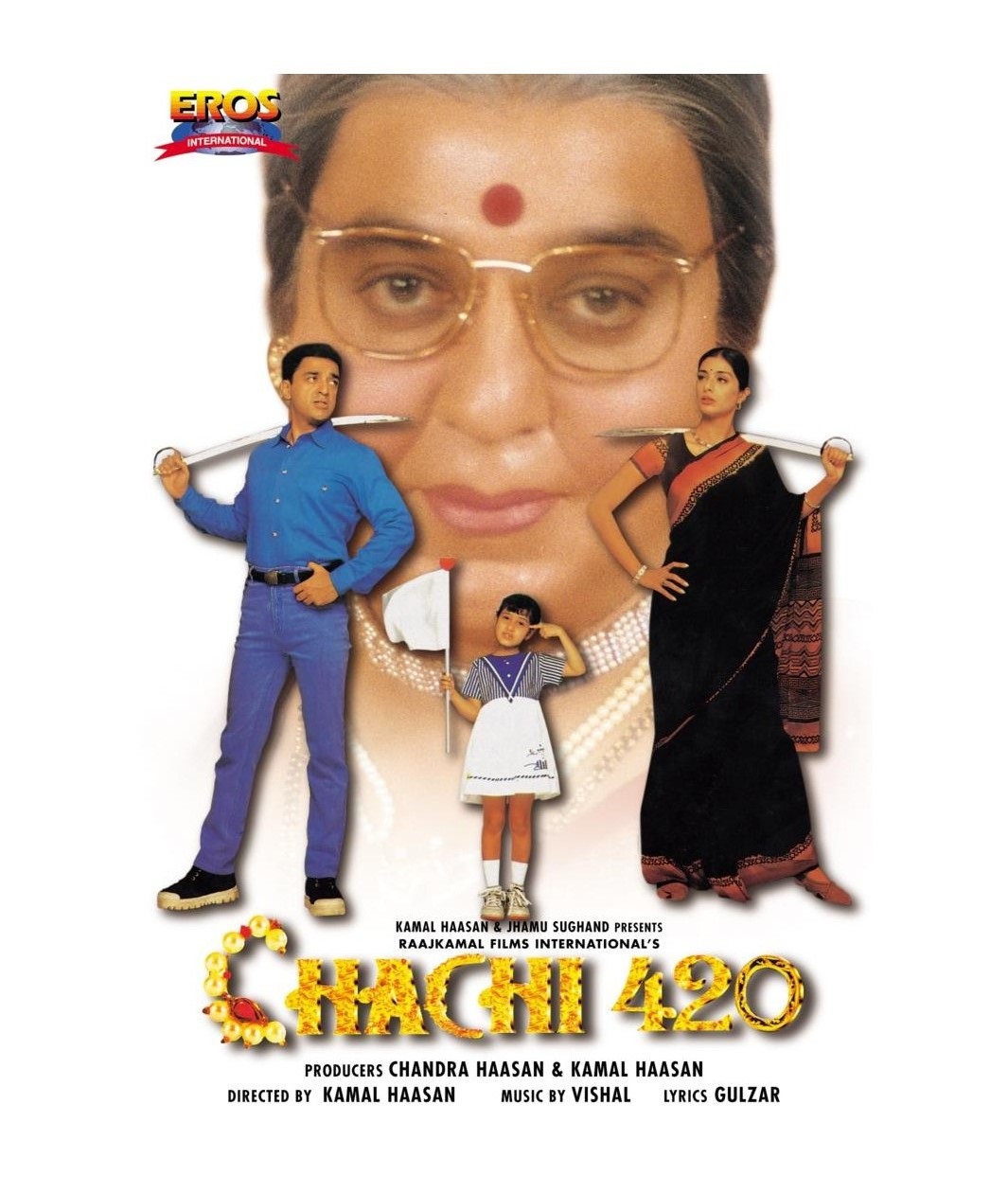 Deepti Naval, Farooq Shaikh, Rakesh Bedi, and Ravi Baswani are bound to steal your hearts with this feel-good rom-com about three college-going friends who fall in love with a young girl. Directed by Sai Paranjpye, Chashme Buddoor soon became a box-office hit. 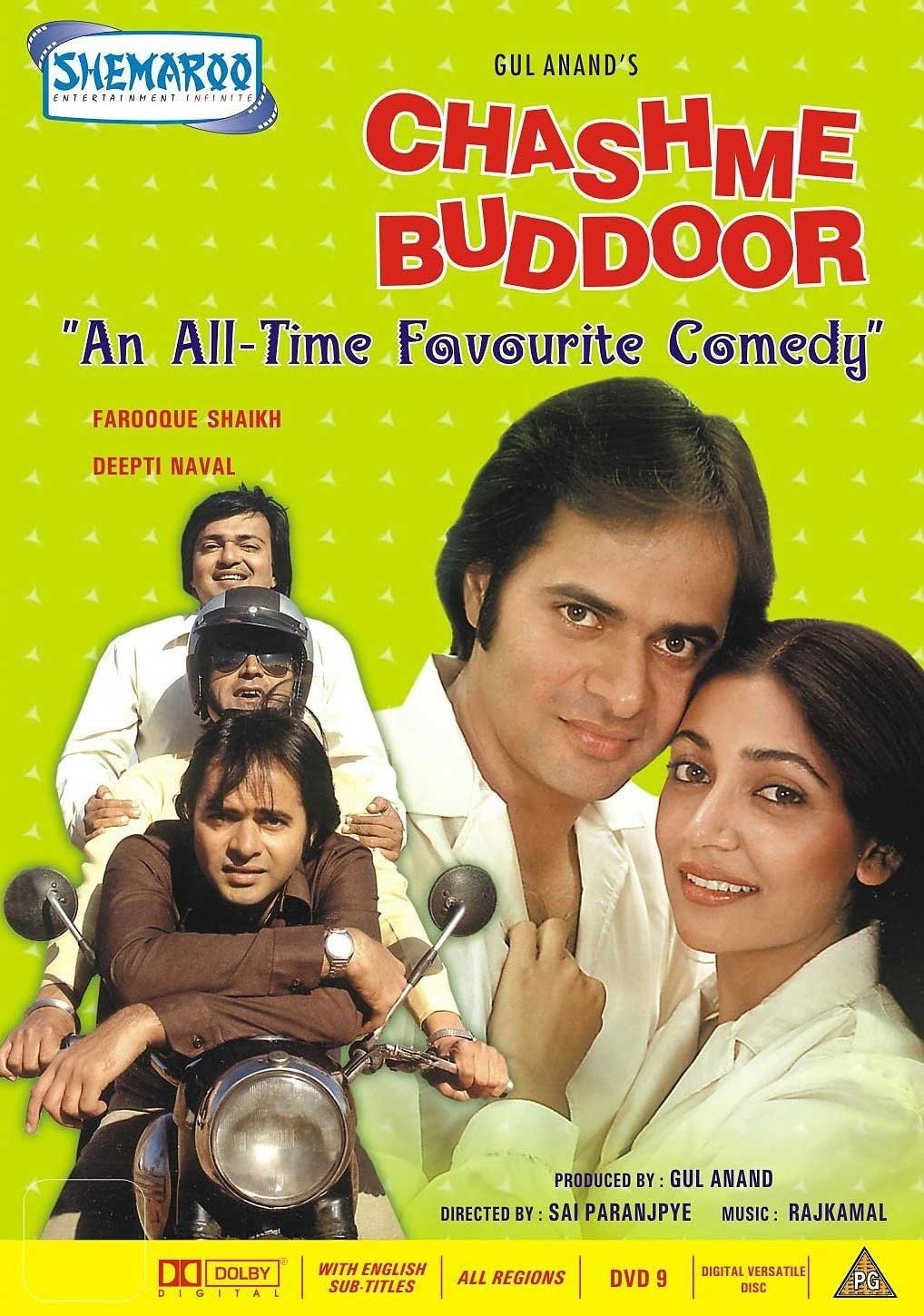 Released in 1968, Padosan shows Sunil Dutt, Saira Banu, Kishore Kumar and Mehmood portraying endearing characters. Dutt wishes to woo Saira Banu but since he can’t sing, his friend helps him by singing in the background. Saira Banu is impressed and falls in love with Dutt’s character. Hell breaks loose when she finds out the truth, and a battle ensues between the hero and the music teacher played by Mehmood. 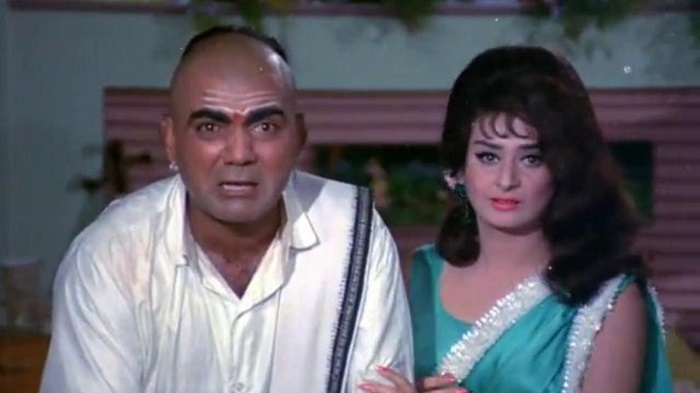 One of the highest grossing films of 2007, despite having Taare Zameen Par as its competition; this hilarious movie depicts the adventures of a good-looking bachelor who falls in love with the sister of two feared gangsters. What made it a hit were peerless performances by Paresh Rawal as the hero’s uncle, and Nana Patekar as the elder gangster. 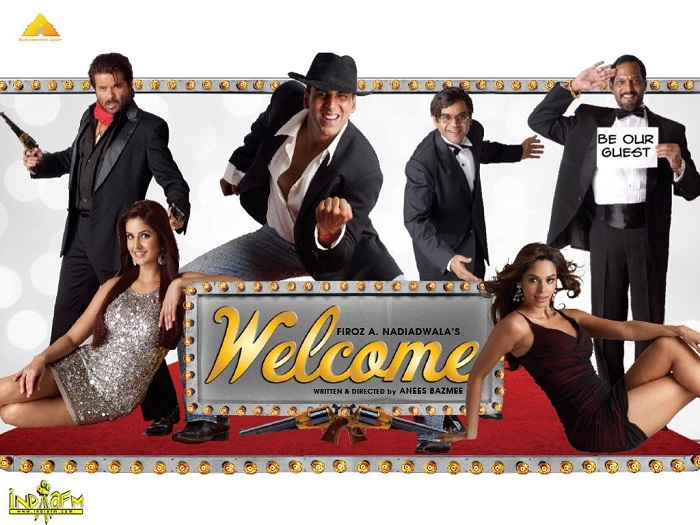