In the starry world of Bollywood, there are a handful of celebrities who keep working on themselves (their bodies) relentlessly and attain the desired results they want to achieve for themselves quite virtuously. Probably this is the reason why some people stand out from the crowd and leave a legacy for others to follow. 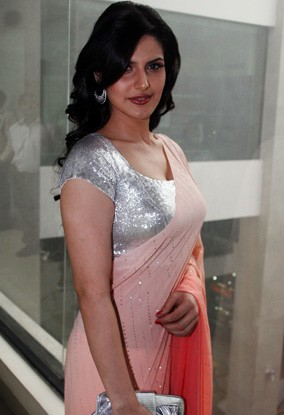 Starring in movies like Veer, Ready, Housefull 2, Hate Story 3 etc. this young actress has startled the world by her incredible weight reduction journey. She undoubtedly corroborates the fact that unflinching efforts and success go hand in hand.

Yes you heard it right! We are talking about none other than Zareen Khan, the lass who underwent a tremendous transformation and ironically many people are not even aware of this freakish weighty affair of hers.

After her debut performance in the movie ‘Veer’, she picked up a lot of criticism due to her physique at that point in time. And to add to her agony, the movie didn’t do that great on the big screen as well.

However she became a raging sensation soon after she showed up doing an item song ‘Character Dheela’ in the movie Ready. From then on, there has been a lot of noise around her and her journey to the fulfillment of a fabulous figure, from where Zareen had no looking back. 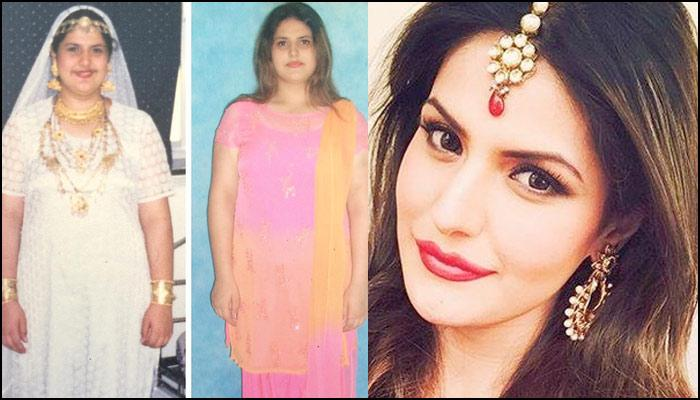 Motivation Behind The Dramatic Weight Loss Journey!!
Born into a Pathan family, Zareen always aspired to become a doctor and resultantly was least bothered about how she looked. Since fitness was never a priority for her, she was much like any other regular girl who used to binge on junk food. That precisely became the prime reason she as a teen started to put on oodles of weight.

See it for yourself in the pictures and you will be amazed as well – a plump and bulky Zareen Khan when she was in her teens. 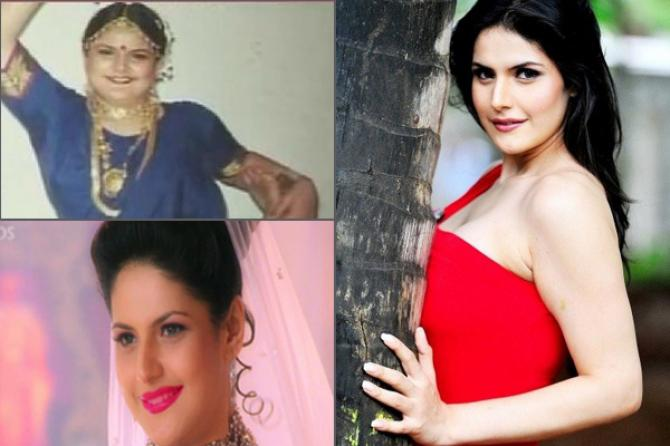 Unfortunately she could not actualize her dream of becoming a doctor which eventually led her to try her luck in modeling. This ambition sparked the idea of losing the unwanted kilos from her body which ultimately proved to be a significant milestone in Zareen’s lifetime.

At first, this proposition seemed to be quite outlandish since she never thought about making a foray into the glittery world of glamour.

Nevertheless the moment she decided to embrace acting, she left no stones unturned to realize her vision- an unimaginably chiseled body that every girl yearns to have.

Zareen Khan, the epitome of beauty has ripped apart the naysayers and the body shamers by achieving the unrealistic target of 57-Kgs from whopping 100-Kgs.

Along with her resolute and proper regulation of diet and exercise, she made a phenomenal reduction of 43-Kgs in just about less than a year. No wonder she is a strong motivation to many others who desire to undertake the same journey in a healthy way. 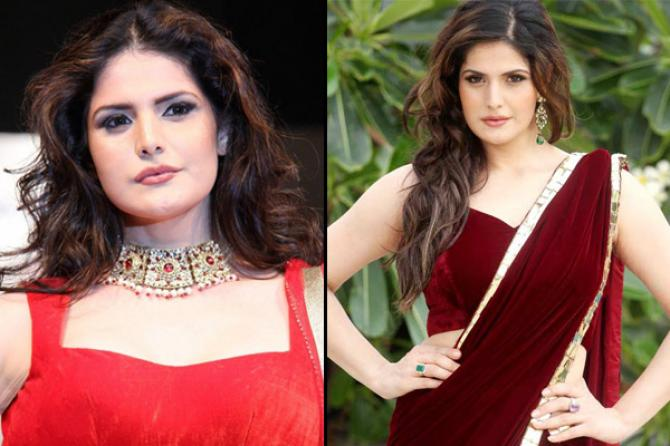 A Sneak Peek Into Her Workout Routine:
Of course it goes without saying that our lady has put in an enormous amount of time and effort to obtain this slender figure in a matter of few months

The dramatic weight loss of 43-kgs within a year didn’t seem to be much of a challenge for Zareen Khan due to her strong willingness to do so. Also, behind this mighty feat was her gym instructor Yasmin Karachiwala, who deserves all the praise as she perfectly developed a personalized workout routine absolutely apt for Zareen’s body type.

She devised a combination of exercises which include the following: 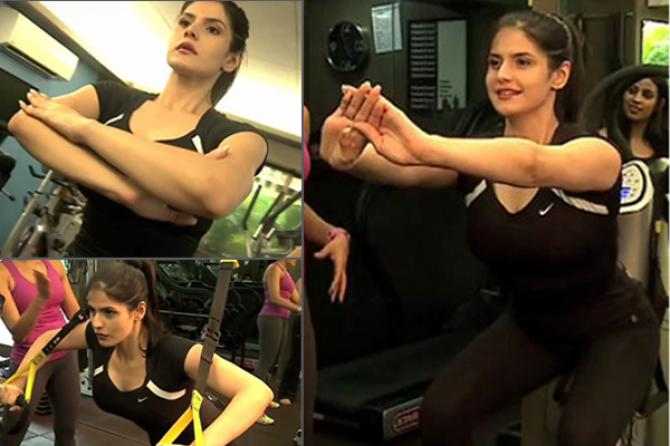 Zareen Khan kick starts her day with nearly an hour of Pilates and tries to make it a point to either jog or swim once a day. Her gym instructor Yasmin employs her to undertake weight training three times a week so as to give her muscles the necessary time to recuperate.

The actress is highly committed to doing yoga which she claims is the secret behind her toned muscles. Zareen doesn’t skip indulging in it despite her travels and busy schedule. 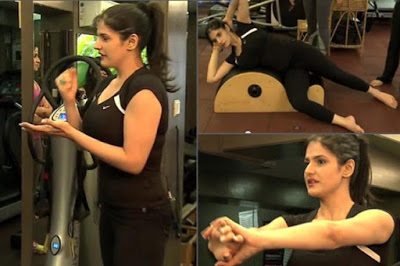 The Diet That Shaped Her Fabulous Figure:
It is so customary to tag dieting/ starving along with weight loss, and perhaps here in Zareen’s case you will be in for a surprise. The damsel’s hot perfect figure that leaves people awestruck is the outcome of eating the right food, in the right quantity and at right time. Proper nutrition is her mantra in order to shed the extra pounds in a healthy way and this is what she has to say when it comes to her diet and workout practice:

“I hate the concept of dieting. I think it’s very unrealistic. I don’t deny myself anything. I stick to a high protein diet which has a lot of veggies and juices. I am obsessed with drinking a lot of water. I needed to make fitness a part of my lifestyle. I can never workout for an hour at a stretch so my trainers created 20-minute workouts for me.”

Therefore the ‘Veer’ actor doesn’t deprive her body of anything. She believes in eating everything but of course in moderation which is fundamentally the pivotal aspect.
Well we just adore the actress’s philosophy and I am sure no one would deny the same. 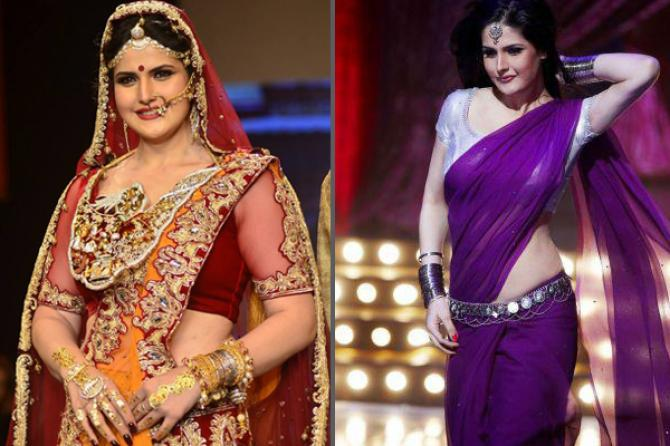 Zareen Khan’s Diet-Plan:
Below is a well-laid diet-plan followed by the actress:

Here Are Some Healthy Dieting Tips For Effective Weight Loss

She tries to follow the popular practice of eating small proportions at regular intervals of 2-hours so as to increase and keep a check on her metabolism. Also, she now consumes coconut water as a healthy substitute to any of the beverages she used to have previously. 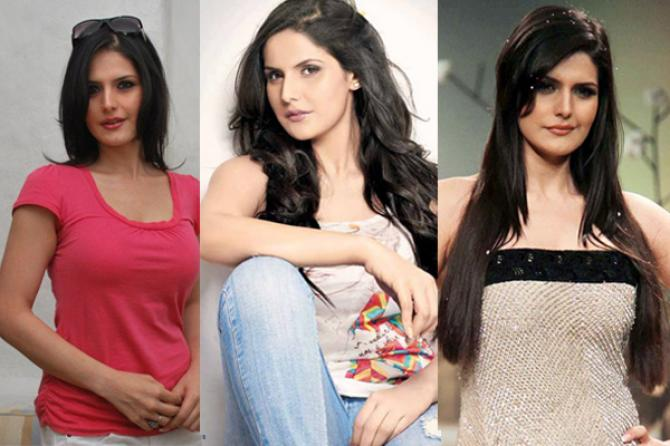 How She Plans To Maintain Her Figure:
We all are aware how challenging it is to maintain that beautiful svelte figure which you have attained after intense backbreaking work and toil. It’s easy to give in to lethargy and slack than to maintain, and as a result for majority it becomes an impossible feat.

But it seems the word ‘impossible’ is not in Zareen’s dictionary, she has proved to the world that there’s no substitute to hard work by persistently making efforts towards her bizarre goal.

Check Out These Tips For Maintaining A Healthy Weight

Zareen Khan’s strong resolution and never say die attitude has been the hallmark of her success. She has incorporated fitness in her life in such a way that it has now become a way of life for her and probably she cannot abstain from it anytime now.

More so, the diet she undertakes complements her workouts which make way for a healthy yet safe weight loss. Thus striking the right balance between diet and exercise is what keeps her going. 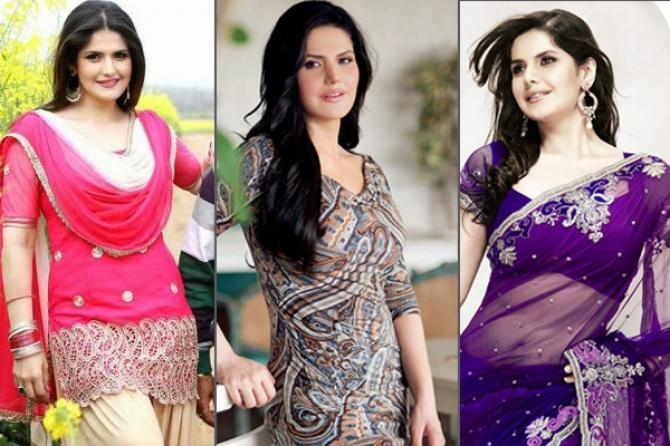 Zareen’s Recommendations To The Younger Generation Who Aspire To Have A Figure Like Her:
The pretty actress believes in consistency with her workouts and eating in moderation is the key to achieving a healthy and sustained weight loss.

As per her, crash diets don’t help at all, in fact she promotes eating the right foods at regular intervals. Along with this, a very strong will to be persistent at the task at hand will be the measure of your progress. In short, you literally have to be honest with yourself to make this dream become a reality.

Furthermore, considering the rumors around her upcoming action movie with Rajeev Khandelwal, she might have to shed some more kilos so as to perform action scenes in the film. That’s some serious stuff again.

Kudos to her and her unbelievable journey, she will forever be a source of inspiration for all who want to be like her