Horror fiction writer manages to make us feel sick in the pit of our stomachs when he says, “I guess when you turn off the main road, you have to be prepared to see some funny houses.” Over hundreds and thousands of centuries, civilizations have come and go. With each disappearing race, their homes have been cast off. With passing time, whether they are buildings or whole towns, these places have been dilapidated, and presently resemble an almost spectral sight. The reasons for abandonment are varied, from wars, natural disasters, to epidemics and genocides. Irrespective of why, most of us are drawn towards such places, intrigued by those millions of untold stories that lie etched in each wall, tree and brick. These other-worldly sites are simultaneously enchanting, and that is why it is so fascinating to know more about them. If you are awed by the uncanny, check out these 25 most haunting and creepy abandoned places on earth.

1. Willard Asylum, Willard, New York
Constructed as early as 1869, the Willard Asylum once used to house almost 50,000 mentally ill patients. During their stay at this place, several inmates died inside the hospital. This makes the morgue situated in the premises one of the creepiest places ever. By 1995, this institution was closed down, and since then it has been abandoned. 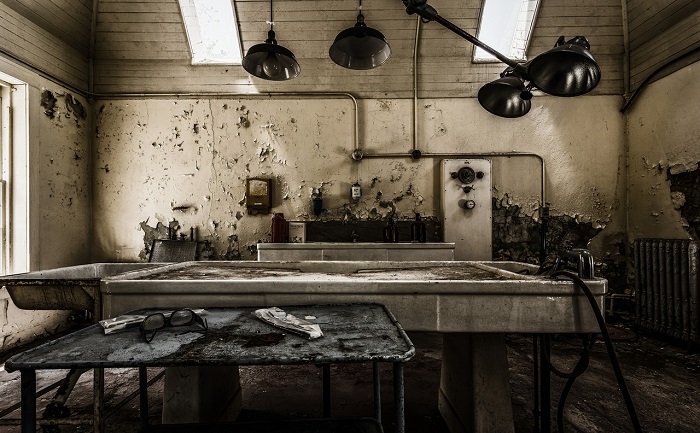 2. Six Flags Jazzland, New Orleans, Louisiana
Once a popular amusement park, the Six Flags Jazzland failed to withstand the blow dealt by the treacherous Hurricane Katrina. Since then, visitors have been prohibited from entering the campus. With demolished rides lying scattered everywhere, no staff and no guests, this place definitely looks like it jumped straight out of a horror film. 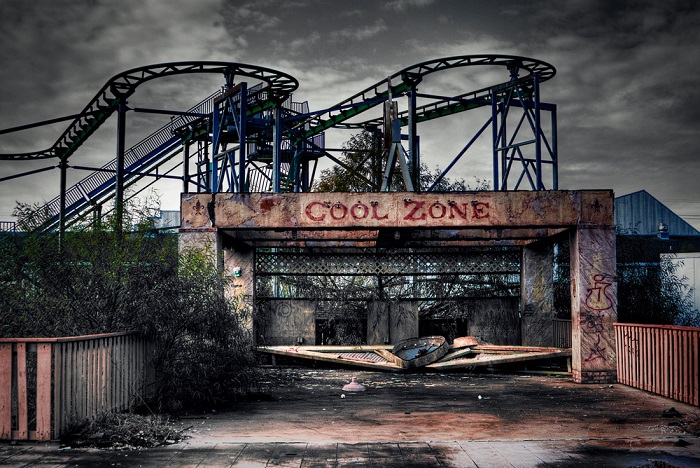 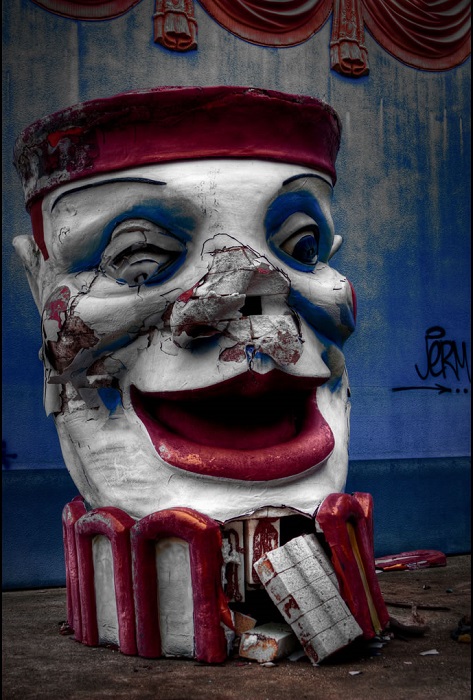 3. Kolmanskop, Namibia
This town was built by German colonists in the 1900s, in the hopes that they would be able to carry on quarrying for precious stones and gems. Since the time the settlers evacuated Kolmanskop almost 50 years later, this little borough has seen no new faces, and still lies barren, covered in sand, and resembling a desert. This ghost town definitely makes the mark as one of the creepiest abandoned places on earth. 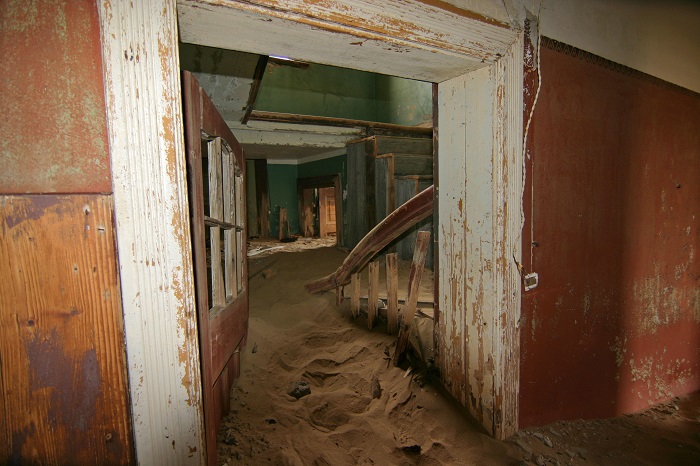 4. Hashima Island, Nagasaki Prefecture, Japan
The Hashima Island, commonly known as the Battleship Island, was once a thriving residential and industrial place, where coal-mining was the main occupation. For the inhabitants of this township, the government took pains to construct schools, eateries, as well as hospitals. Presently, however, it has been forsaken, and looks quite eerie. In recent times, it was used as a shooting locale for the Daniel Craig starrer, Skyfall. 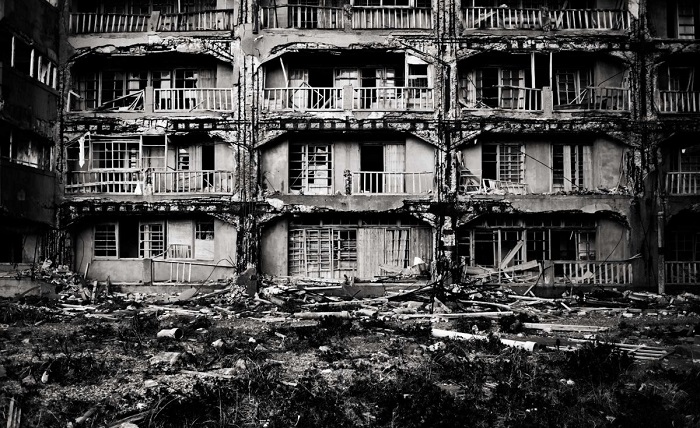 5. Garnet, Montana, United States
Another ghost town on this list, Garnet thrived on its gold-mining prospects, housing hundreds of residents at one point of time. However, since the 1930s, it has remained uninhabited, though tourists are allowed to visit the place. 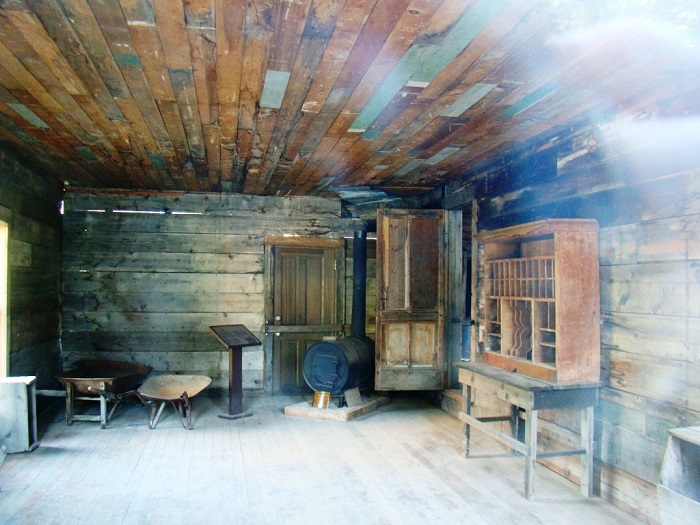 6. Craco, Italy
There was a time in the 1500s, when Craco, a tiny town located on a hill in Italy, was bustling with people. However, this region was constantly plagued by landslides, and eventually residents started moving out. By the beginning of the 1990s, this place was completely deserted and devoid of any inhabitants. 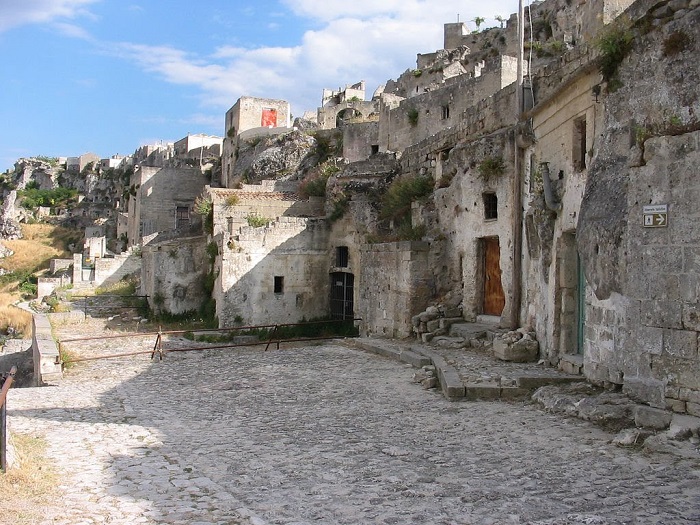 7. Marlboro Psychiatric Hospital, Marlboro Township, New Jersey, United States
Quite often, an asylum has served as a setting for horror films, owing to its mammoth castle-like structure, creaky wheelchairs and stretchers, damp walls, and shackles tied around bedposts. New Jersey’s Marlboro Psychiatric Hospital is no different, especially because of its gory past. It was established in 1931, but the inmates were ill-fated, with many being strangulated to death, and others mysteriously disappearing. Presently, the site has been deserted, and the building is being broken down to create an entertainment area for the residents of the town. 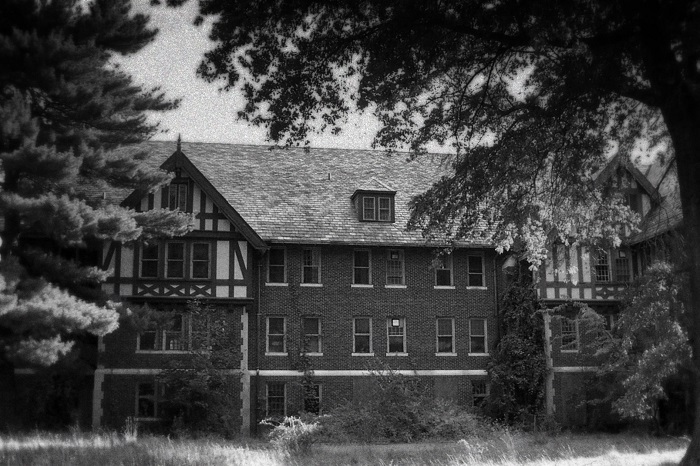 8. Military Hospital, Beelitz, Germany
Yet another medical institution, the Military Hospital in Beelitz, which was fully functional since World War I until 1995, has now been abandoned. Though there are some sections of this sanatorium that is still used to for scientific study, most of it looks creepy and desolate. 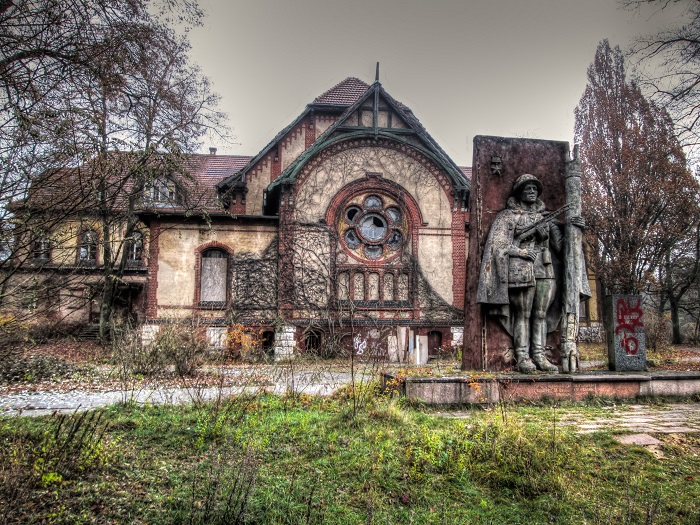 In Georgia, the Old Atlanta Prison Farm was built in 1945, and for fifty years, it served as a penal institution for small-time offenders who were usually employed to take care of livestock and harvest crops. Today, it lies unoccupied, and is nothing more than a pile of debris. However, what is fascinating about this place is the fact that tourists and locals, who visit this detention center, have reported sightings of apparitions and other paranormal phenomena inside this prison. 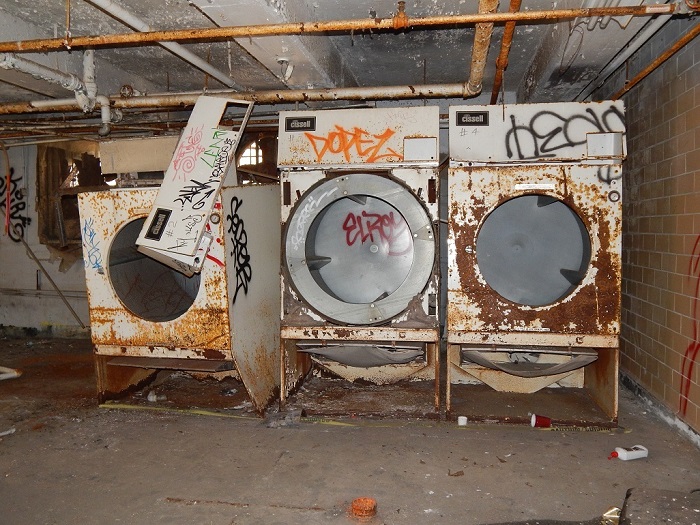 10. Ararat County Gaol: J Ward, Ararat, Australia
During the gold rush in Australia, the authorities of Ararat Lunatic Asylum in Victoria established the Ararat County Gaol or the J Ward in 1887, to house the criminally insane. The institution was later evacuated, and has now earned the reputation of being one of Australia’s spookiest places. 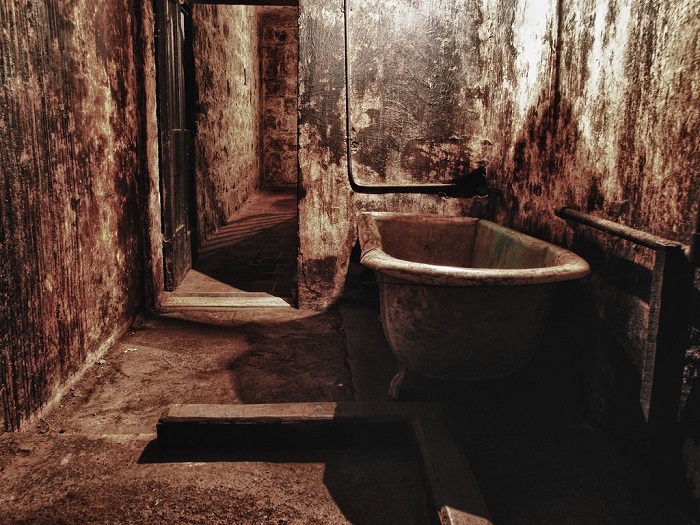 11. Chateau Miranda, Celles, Belgium
The Chateau Miranda is a magnificent castle that was constructed by elite French settlers who had taken refuge in Belgium. During World War II, and for some time after its conclusion, this castle was used as a shelter for orphans. In 1980, due to a tug-of-war between the owners and the orphanage authorities, the castle was abandoned, and is now reduced to a mere haunting shadow of the beautiful structure it once was. 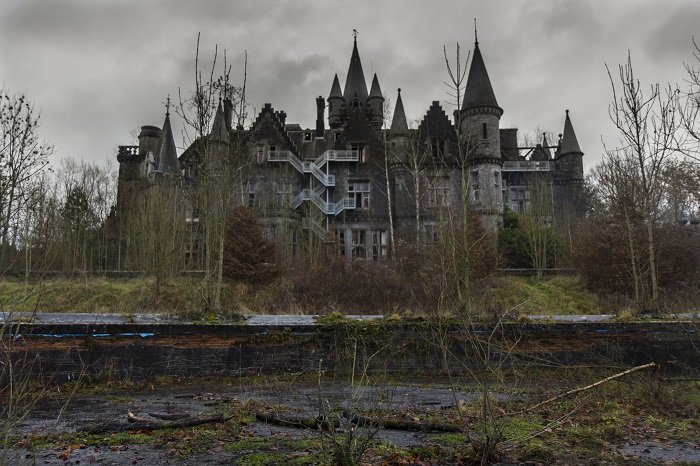 12. Underwater City, Shicheng, China
Shicheng was a city that was built more than 1300 years ago near the Xin’an River. There was a time, when this ancient city was alive with a whole civilization residing in it. 53 years back, when the river flooded during the construction of a hydro plant, the entire city was submerged under water, and the inhabitants were lost forever. 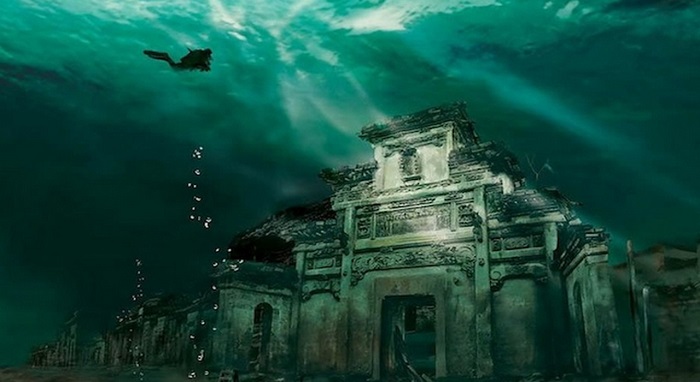 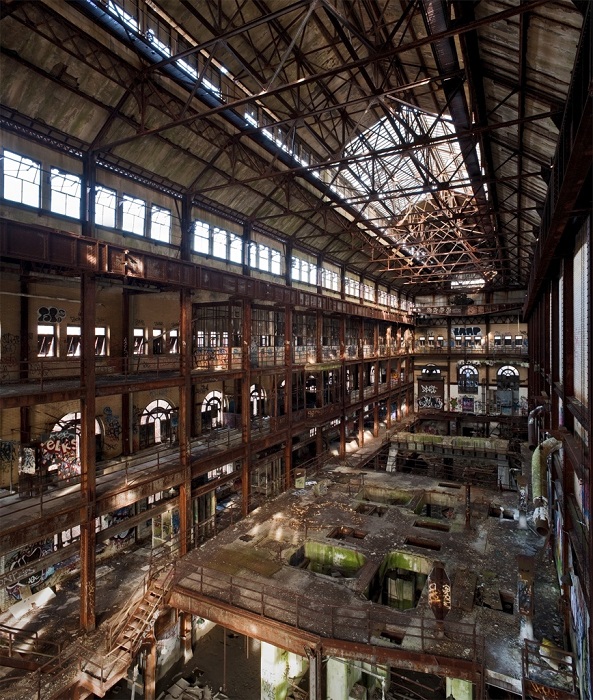 14. Black Church, Europe
Though historians haven’t yet found out when this striking church was built or the purpose it usually served, this abandoned place in Europe is widely considered to be haunted. Paranormal or not, the sight of a coffin meant for a baby, and chairs that were arranged for a funeral, undoubtedly add to its sinister atmosphere. 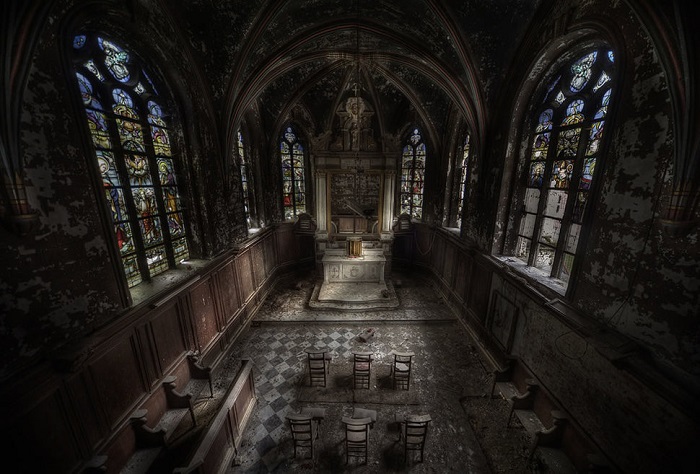 15. El Hotel del Salto, Colombia
This hotel in Colombia was established in the 1920s for rich visitors, and fitted the description of a grand awe-inspiring structure. However, the waterfall it was located on, proved to be contaminated, and the number of tourists visiting it began to diminish. Also, there were recurrent reports of guests having committed suicide inside the hotel. Soon this place was evacuated, and though it has now been converted into a museum, people claim to have seen ghosts. 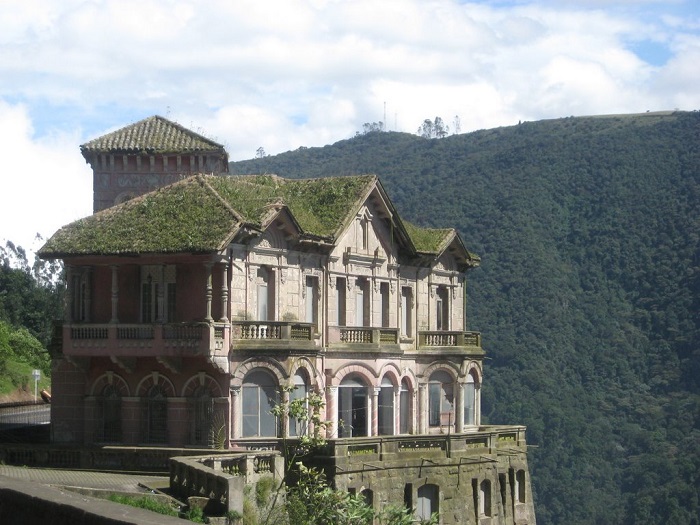 16. Church of the Nine Ghosts, Lukova, Czech Republic
There was once a church in Lukova that failed to attract followers, leading to the deterioration of the building. Soon, an artist living close by painted pictures of nine ghosts and hung them inside the church. Even today, this place lies abandoned, and looks haunted. 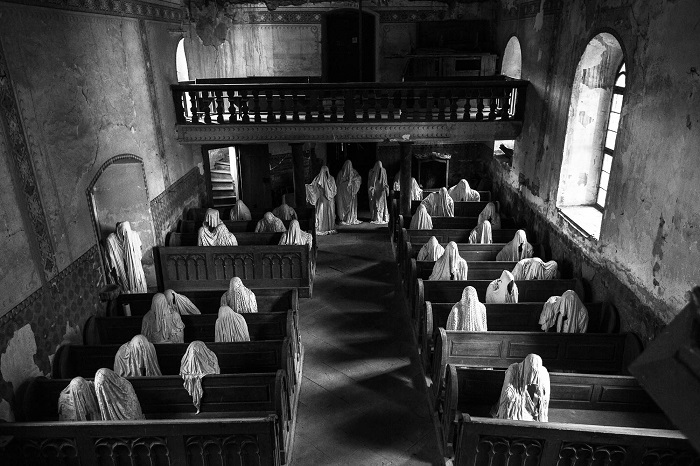 17. Isla de las Munecas, Mexico City, Mexico
The visual epitome of voodoo and black magic, Isla de las Munecas in Mexico is indeed one of the most haunting and creepy abandoned places on earth. No one lives here except lifeless doll, most with some body parts missing. As legend goes, a former caretaker had come upon a young dead girl, and in her honor had placed dolls everywhere, including walls, trees and fences. The weirdest angle to the tale is that the man was later found dead at the same place as the little girl. 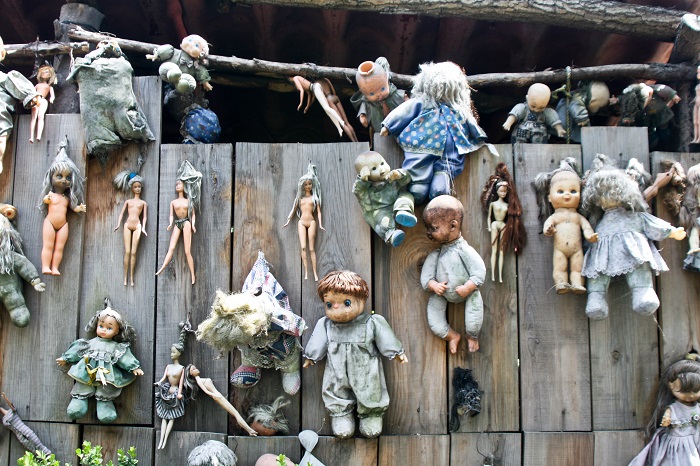 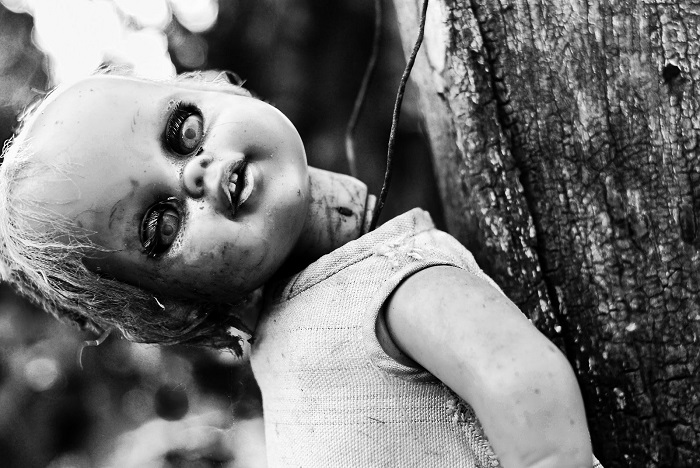 18. Unoccupied Irish Homes, Ireland
From the outside this Irish neighborhood looks like the perfect place to settle down with your family, with rows of pretty houses that look identical. However, once you observe keenly, you notice that these are unoccupied houses that were never occupied. Since these houses are unoccupied, people find it strange and queer to walk alone on these desolate streets. 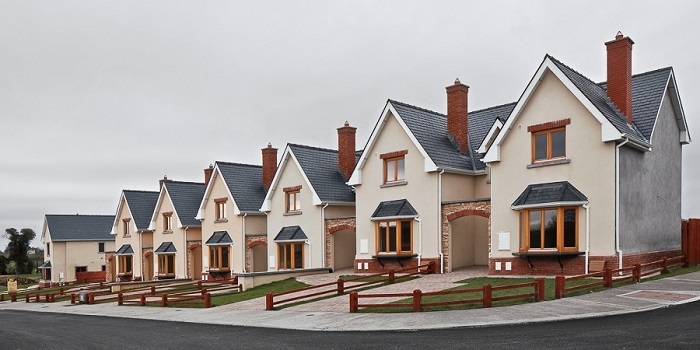 19. Floating Forests, Sydney, Australia
Instead of dismantling the Australian navy vessel, SS Ayrfield, after World War II, it was abandoned, along with other ships. Having seen no inhabitants, these ships now have a variety of plants growing in them, making them look like a floating island. Enchanting but creepy nonetheless! 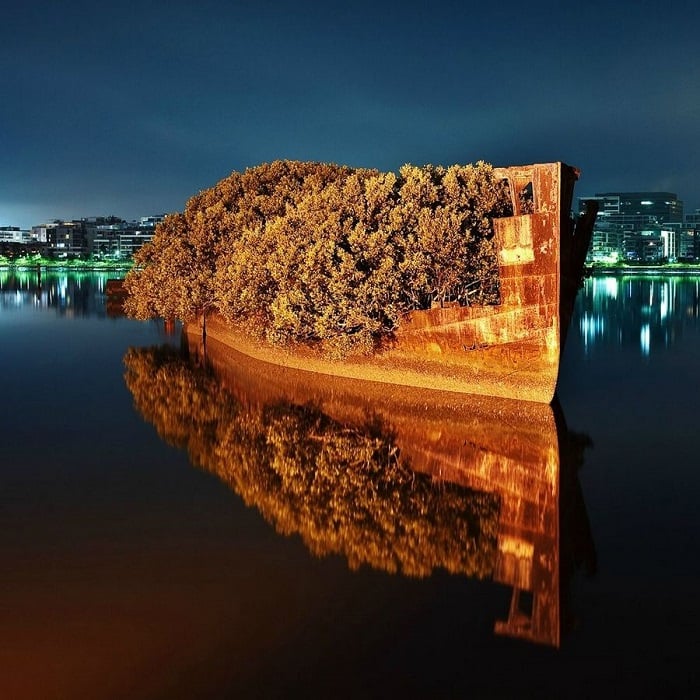 20. Discovery Hut, Antarctica
In 1904, the Antarctic exploration team had set up the Discovery Hut. However, it wasn’t used for long, and from the time it was abandoned, it looks eerie, with no signs of decay and deterioration, most probably owing to the fact that it is always freezing out there. 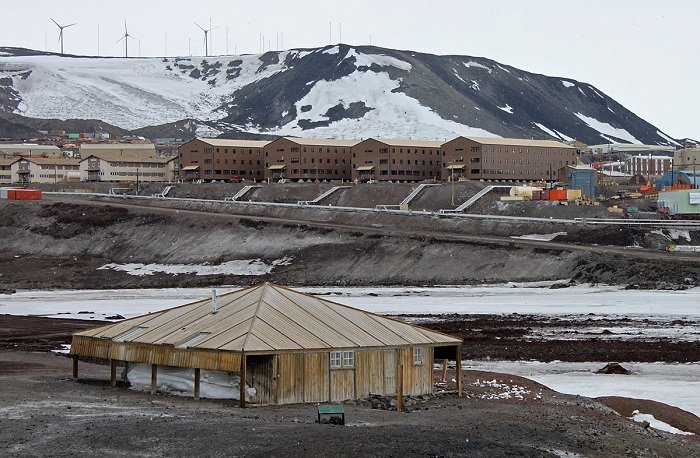 21. Abandoned Train Station, Abkhazia, Georgia
A train station connecting Georgia to Russia was soon shut down, after the 1992-93 Abkhazia War. Though nature has taken its course, and most of the station is in ruins, there are certain parts that still exude beaut. Yet, it is quite nightmarish, visiting such a quiet, empty place. 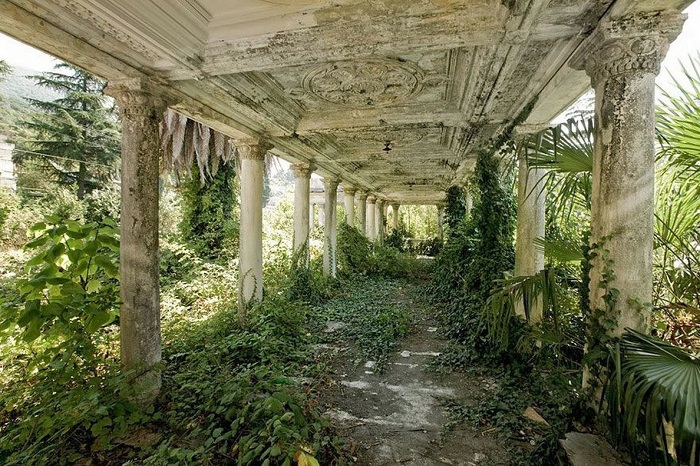 22. Ross Island, Andaman And Nicobar islands, India
This picturesque island has some extraordinary buildings, and was once used as the administrative headquarters, during the British rule. However, in the 1940s, a devastating earthquake hit the land and then the Japanese invaded the region. Eventually it was abandoned by the residents, and is now open to tourists. 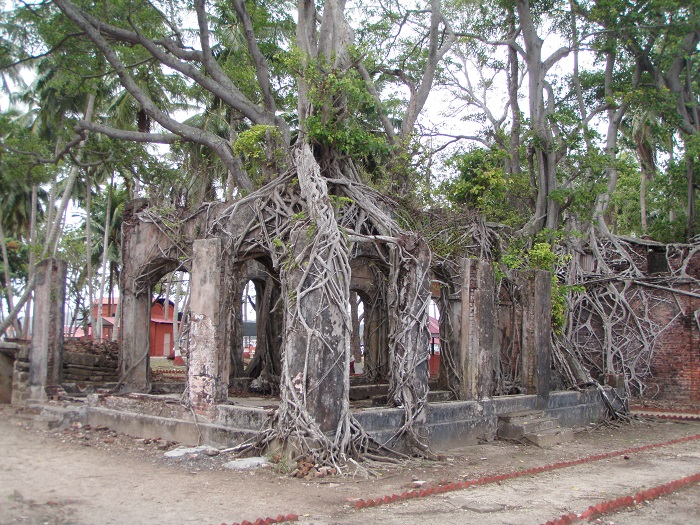 23. Mezhyhirya Residence, Kiev, Ukraine
This estate was owned by former Ukrainian President, Viktor Yanukovych, who abandoned his residence, following the bloody revolution in the country. However, it is not the state of the house, but the violent circumstances under which he deserted the place that gives most people the creeps. 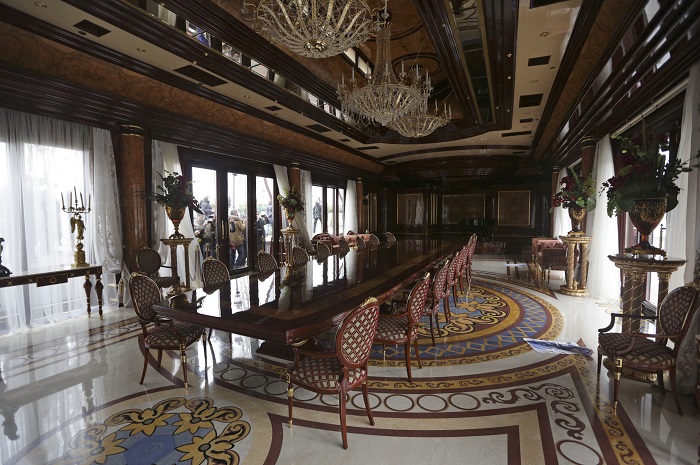 24. Oradour, France
This was a small town in France, having a population of 642 people. In 1944, all of them were murdered by the Nazi German soldiers, when they erroneously believed that one of their own officers had been captured and kept there. Later, the soldiers realized their mistake, but since then no one has ever inhabited Oradour. 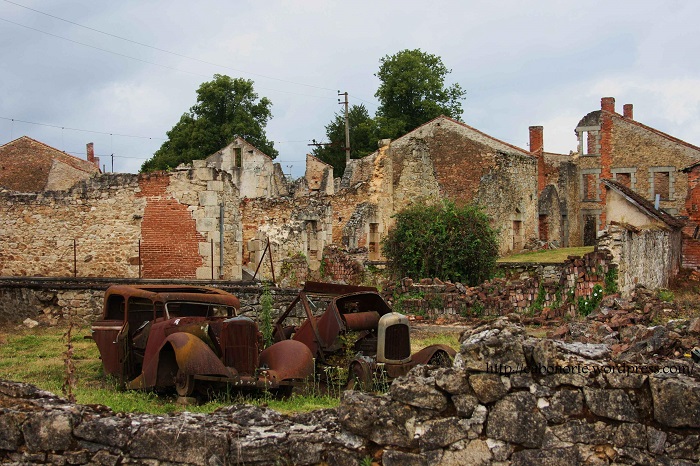 25. Anderlecht Veterinary School, Brussels
You must be wondering how a school could ever be haunting. The Anderlecht Veterinary School however, is different and has been famously called the ‘Lab of Horrors’. This institution looks unquestionably eldritch with stuffed, dead animals preserved in jars, animal parts stitched together, as well as rusting lab equipment, strewn everywhere. 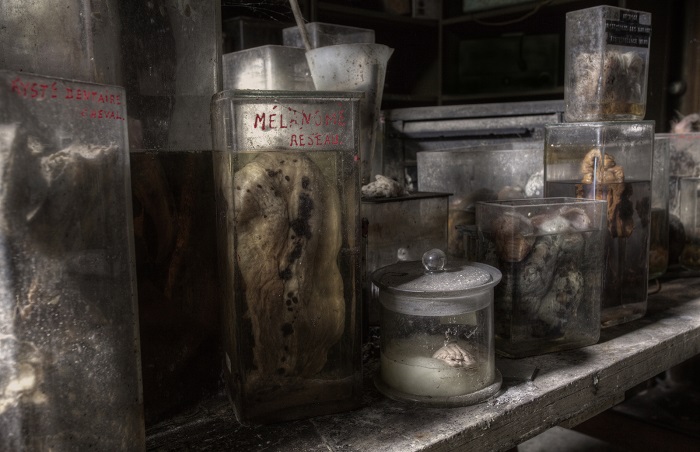 Stumble
It would be quite exciting to unravel the mysteries associated with the places. Don’t you think so?

It would be quite exciting to unravel the mysteries associated with the places. Don’t you think so?
Share On Facebook