“I love the spirit of Halloween and the energy that comes with it”—American singer, Katharine McPhee. Halloween, observed worldwide on October 31st, is a popular festival, dedicated to the deceased. It is the time when the power of death is ridiculed, and to do so, adults and children dress up in spooky costumes or go trick-or-treating. While most people concentrate on giving their children the most authentic outfits, there are some who include even their pets in the ritual. More often than not, pets are so eager to please us that they are ready to endure even the worse of nonsense from us. Some attempts we make as pet owners may fail miserably, whereas occasionally our efforts may be flawless. Whatever be the attire, our pets have the ability to lend the garb their own distinctiveness, and at times their charm is just too much to resist. There are instances when animal lovers like us can just swoon over these dear little critters. I mean why shouldn’t we, when we have these 25 terrifyingly cute Halloween costumes for pets?

1. Rob-Bun (Robin)
Robin has always been one of my favorite fictional characters. In fact there are times when I can’t decide between Batman and his junior counterpart. However, this cute bunny takes the cake any day with his irresistibly cute Halloween costume. I mean, just look at that black eye mask resting on that stubby nose… 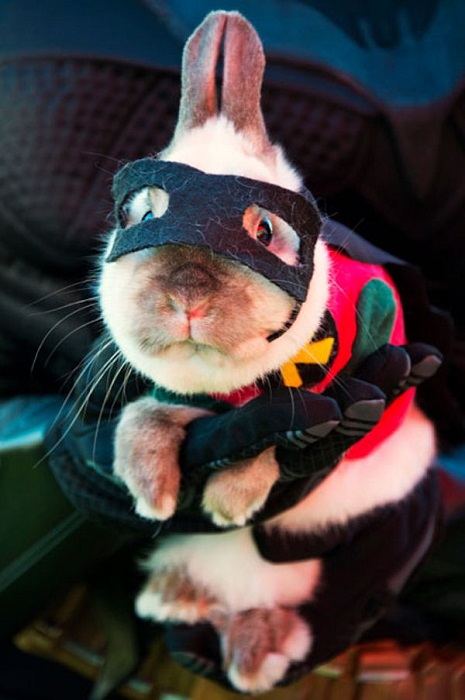 2. AT-AT (Dog) Walker
Dressed as the war machine, AT-AT Walker, resembling ancient animals that were used in battles, this adorable dog looks as if he jumped straight out of the sets of Star Wars! His humans have ensured precision in designing his body suit, turning him into the ultimate Halloween pet. 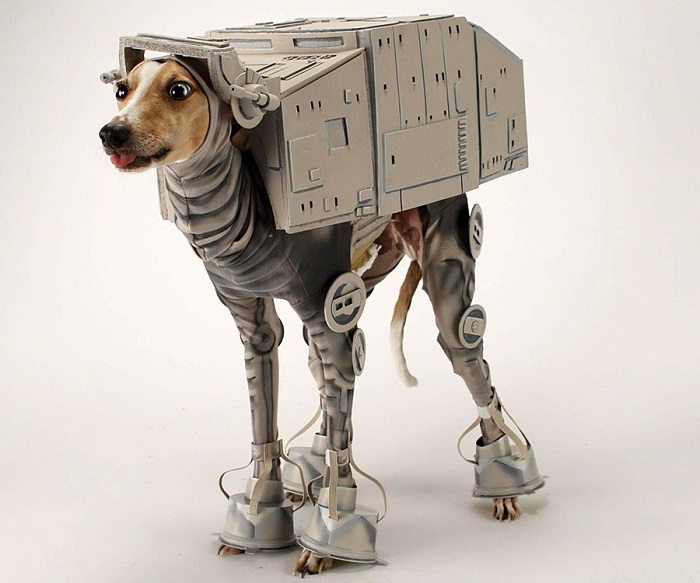 3. Fluffy From Harry Potter
Granted, Fluffy, a Cerberus, who features in the Harry Potter series, is a large three-headed dog that is deemed ruthless by everyone. Yet, this doll, whose parents dressed him up as Fluffy is nowhere near as vicious. The terrifyingly cute costume is in fact so endearing that one look at this dog and you would be forced to go “awwwwwwww!!” 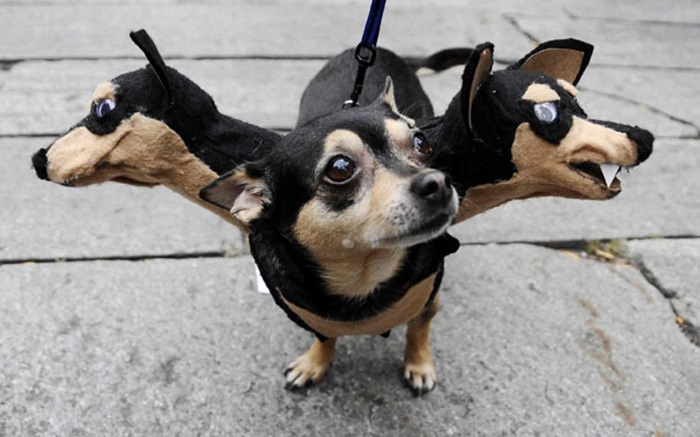 4. Boiled Lobster Cat
Oh, how I wish I had this particular darling in my stew pot! Wearing a bright, orange lobster costume, no doubt this kitty is going to steal millions of hearts. Of course, the look on the pet’s face suggests that he’s thoroughly harrowed, but then we can still admire him, can’t we? 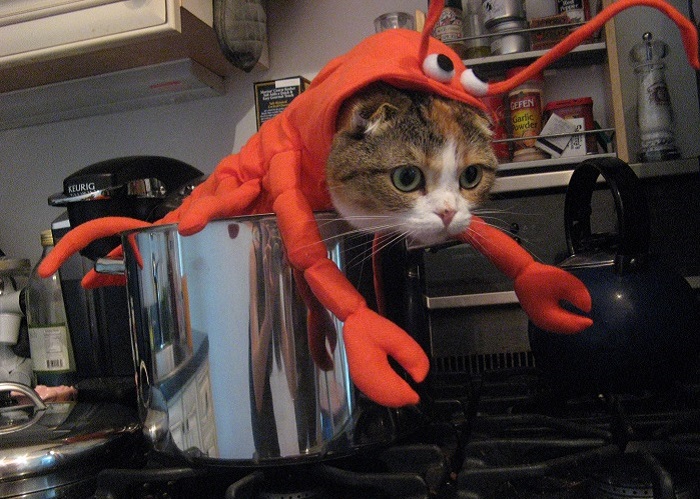 5. Pumpkin Cat
How can Halloween ever be complete without pumpkins? Moreover, there’s absolutely nothing that can beat this winsome fur-ball in the outfit of our favorite fruit. As if his cute face wasn’t enough, the costume makes him look even more adorable. 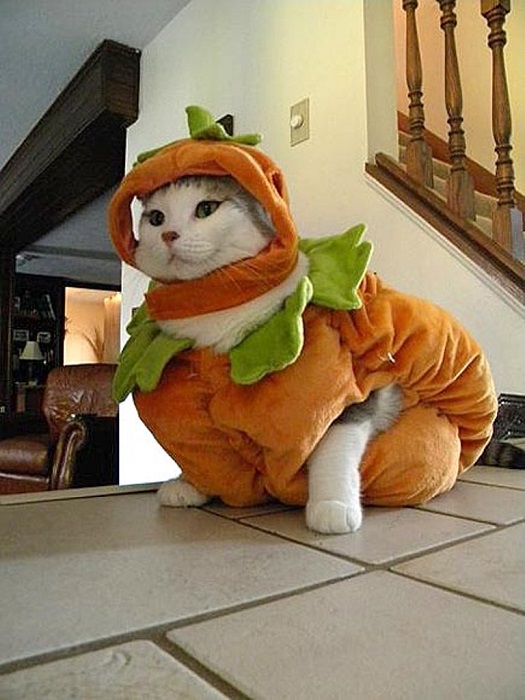 6. Bumble Bee
Dressing up your little fur baby in a costume resembling a bumble bee has always been a favorite Halloween pastime. Of all those cutesies who look like angels in their pretty yellow and black dresses, this chocolate-box is a clear winner. 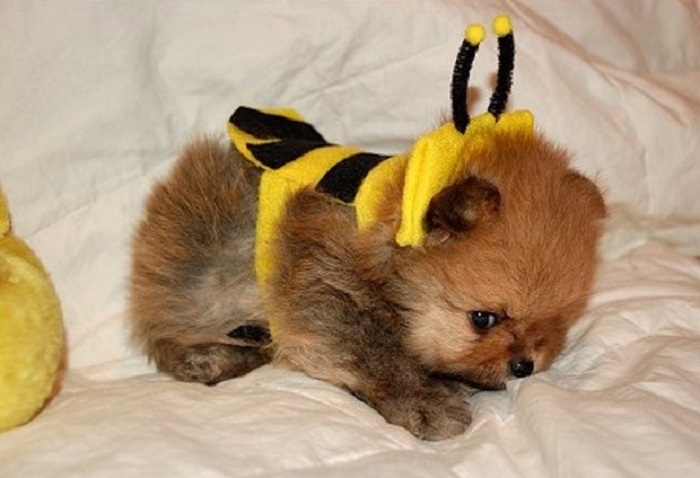 7. Captain Jack Sparrow
The most-loved of all pirates, Captain Jack Sparrow, played by Hollywood star Johnny Depp, has always been a heartthrob. However, this Chihuahua, with his pirate hat and long dreadlocks, seems like the perfect competition to Sparrow, except that the dog is unquestionably cuter. 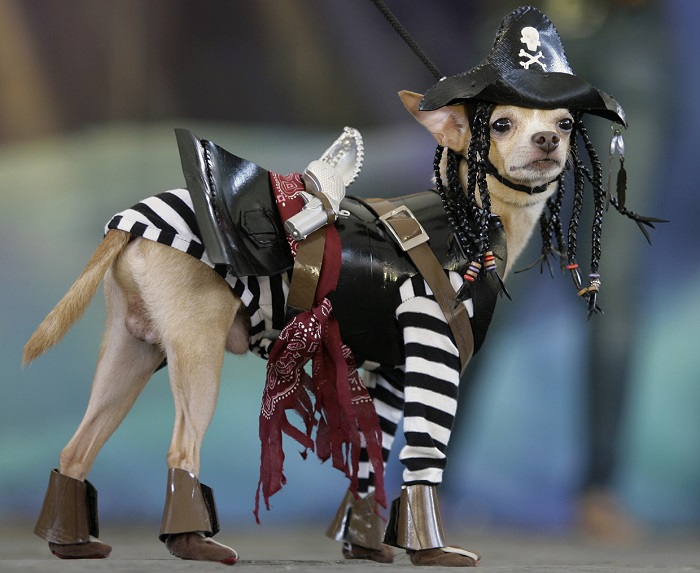 8. Spider Dog
Finally, here’s the quintessential antidote for those suffering from arachnophobia—a cute terrier dressed up like a spider. One look at this bonny pup in his Halloween costume, and you will no longer be petrified of those hairy, eight-legged creatures. 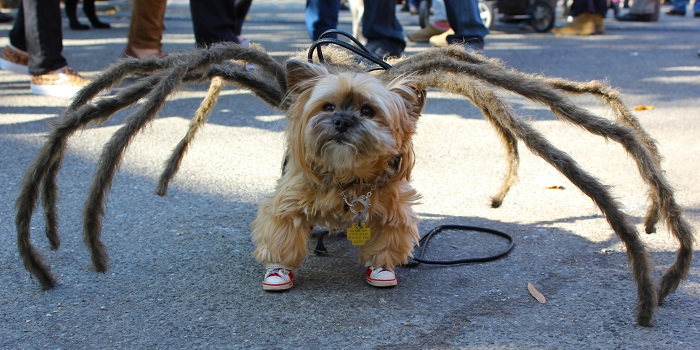 9. The Bostie Scorpion
The Boston Terrier we see here is even more delightful than the one above, when dolled up to resemble a scorpion. He looks so charming, that you won’t be able to resist the urge to brave those claws and give him a loving peck on his wrinkly snout. 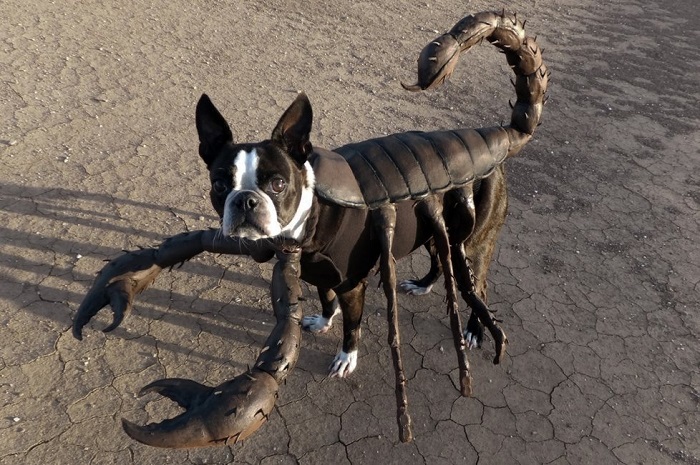 10. Bat-Cat
Fixing a cool felt paper bat wing is all this cat’s humans did to make her look prettier than she already is. Isn’t she making a style statement with those glowing green eyes, black coat of fur, and matching black wings? 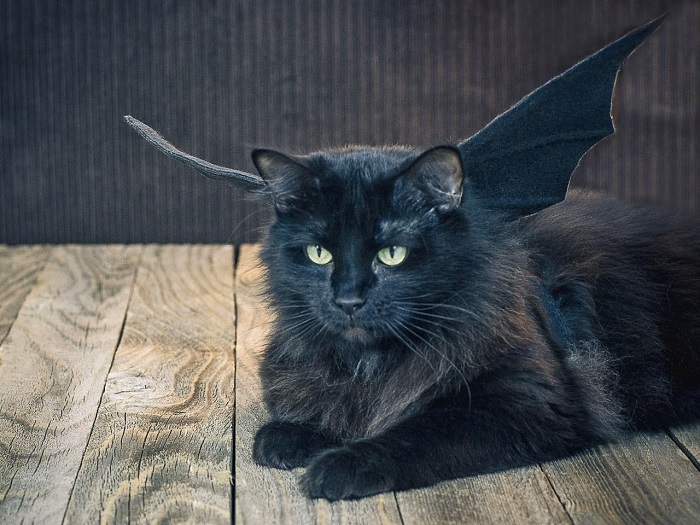 11. The Skeleton Dog
This is a brilliant effort on the part of this German shepherd’s human parents to make him look like a skeleton. However, instead of looking scary, it’s one of those examples where the animal as usual looks endearing. 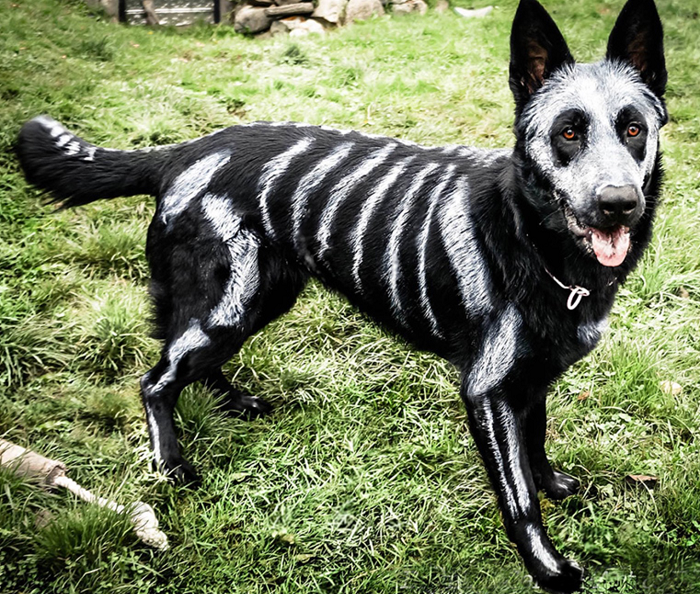 12. Zombie Dog
Would anyone ever be scared of a zombie, if they spotted this sweetheart out on the road? This angel just stole my heart with a cute smiling face and that delightful, curly tail, despite being dressed in tattered clothes with the brain, ribs and flesh jutting out. 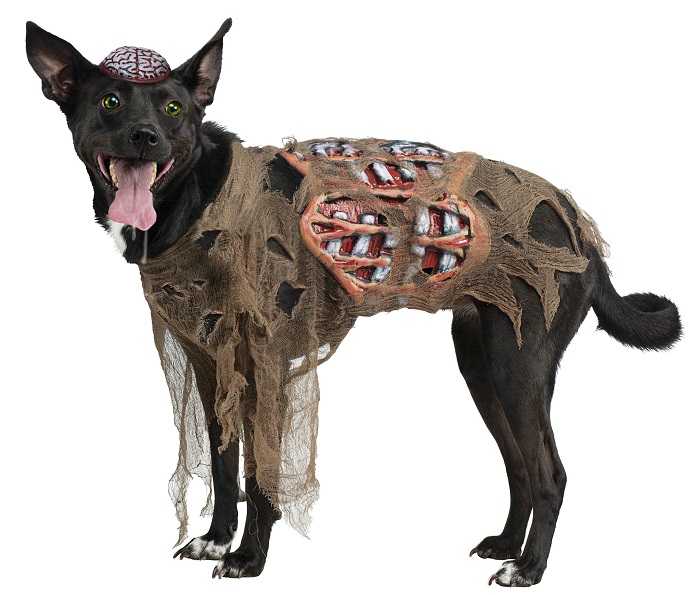 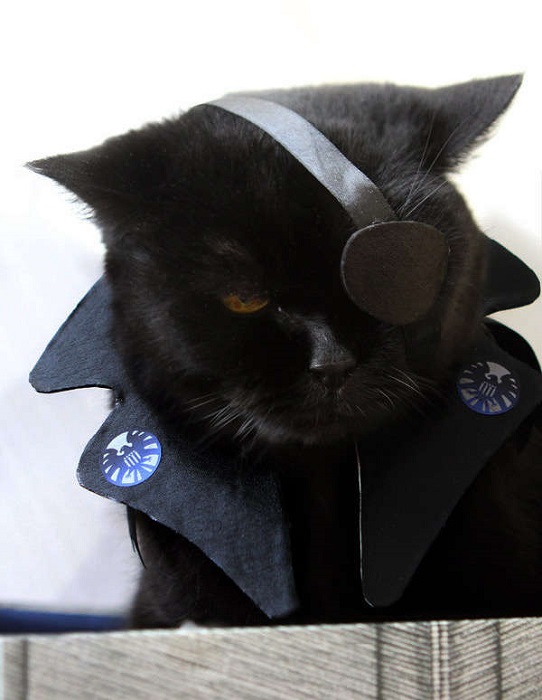 14. Cat In Armor
This leopard lookalike seems to be wearing one of the best Halloween costumes ever. The spiked armor, with scales like those of an armadillo, gives this cat a charming appearance. What sets the mood in this photograph are the bones and skull lying scattered around. 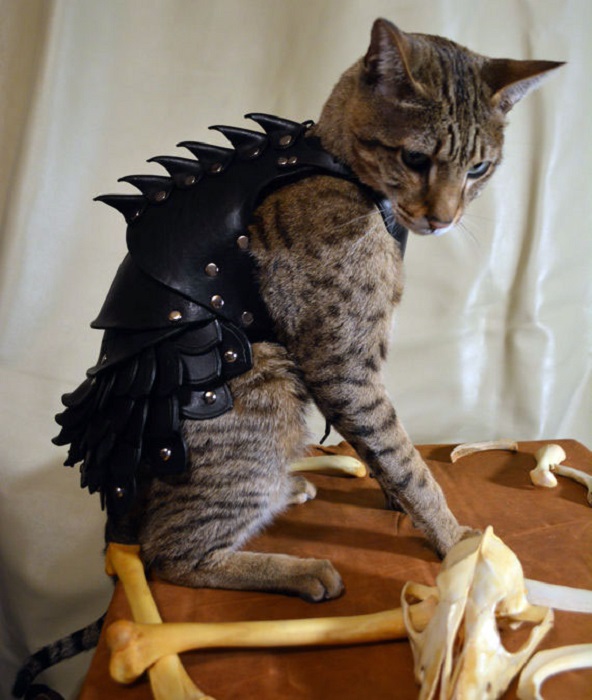 15. The Dinosaur Guinea
The costume no doubt looks like a prehistoric stegosaurus, but dressing up a guinea pig in the same? That, as you can see, is nothing short of a cuteness overload. 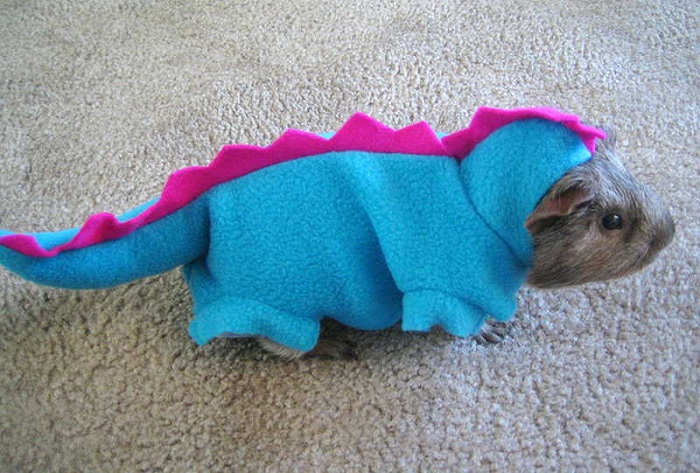 16. Thor
Chris Hemsworth may be the Thor that most ladies drool over, but for me, this Pembroke Welsh Corgi wins the trophy hands down for the better dressed version of the Avengers superhero. 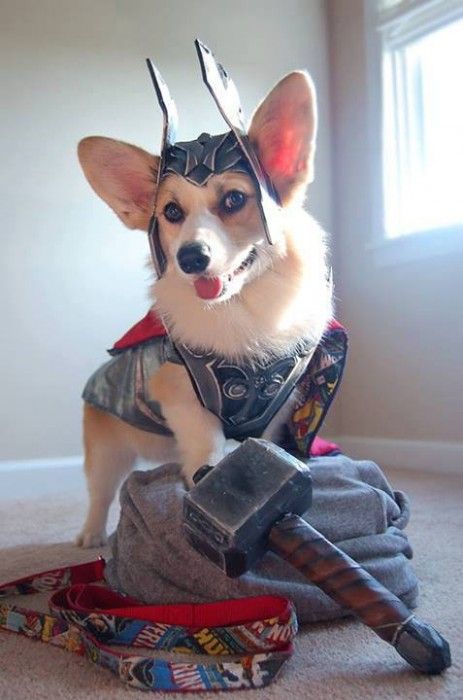 17. Darth Vader
If you’re a Star Wars fanatic, you will definitely love the way this pretty pug is dressed to kill. Reminding us of the super villain Darth Vader, this is no doubt, a unique Halloween costume. 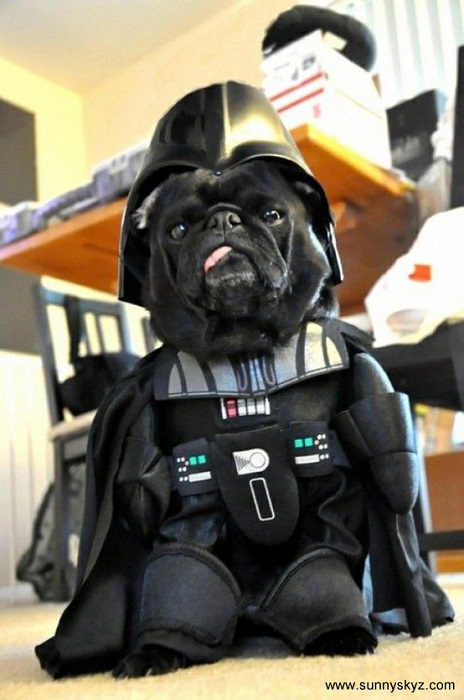 18. Shark Dog
Inspired by the iconic film, Jaws, here’s another endearing little pug wearing clothes that make him bear resemblance to a shark. The outfit almost makes him look like a cuddly soft toy, and it would be quite a daunting task to not steal a second glance at this enchanting pet. 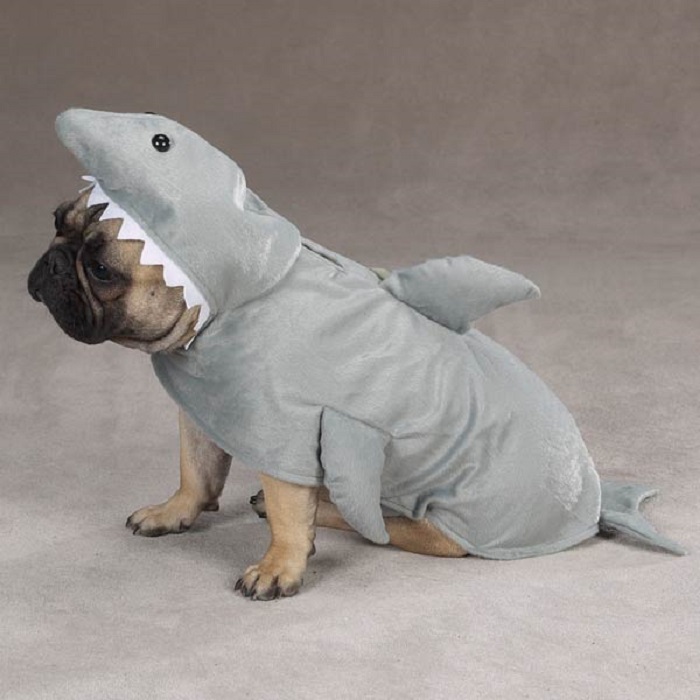 19. Horse Potter
Move away dogs and cats; the majestic horse is finally here! Some pet owners will go to any lengths to doll up their animal babies, and the stallion you see here, is a flawless example of the well-known fact. Decked up as Harry Potter, this darling does paint a pretty picture. 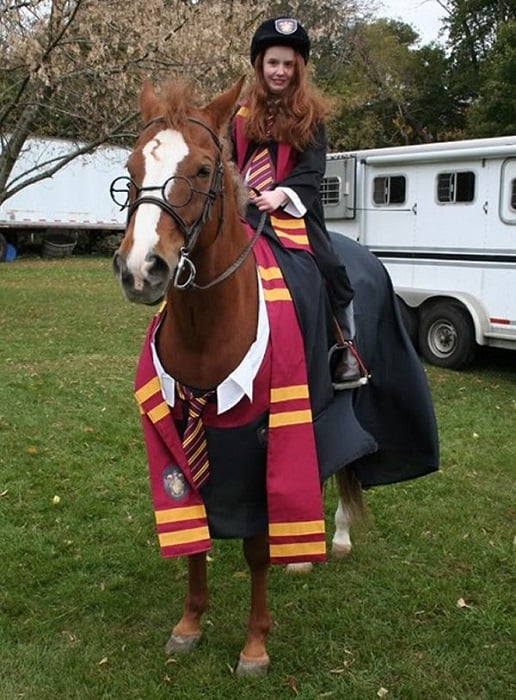 20. Freddy Krueger
Guinea pigs are delightful creatures even when they aren’t wearing any clothes. However, how on earth do we stop ourselves from mollycoddling the baby, when it is dressed in the garb of the feared antagonist, Freddy Krueger? The hat, the cardigan, and even the fake claws are picture-perfect! 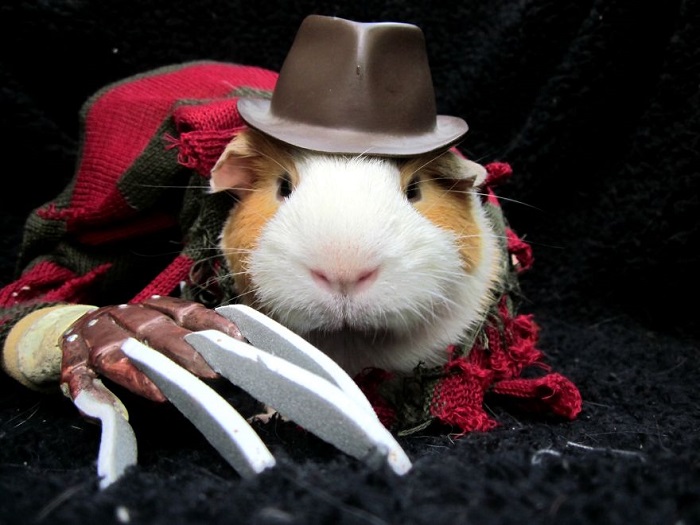 21. The Witch Kitty
Witches can’t always be evil, can they? When a witch ends up looking this cute, there is absolutely no way I am going to freak out the next time I watch a horror movie. Those unimpeachable eyes are sure to touch the deepest corner of your heart. 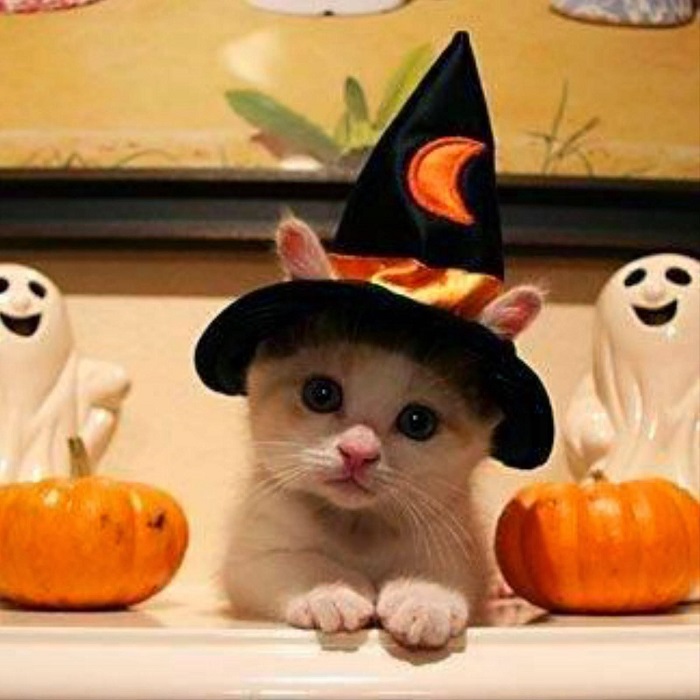 22. Dobby
Harry Potter fans, here’s another outfit that will blow your mind away. Using a simple pillow cover (as all avid readers of the book know), this cutie pie has been made to resemble the loyal Dobby. 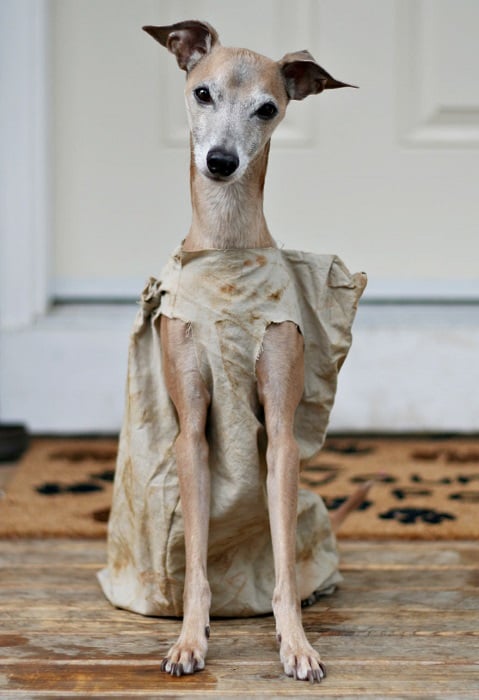 23. The Bumble Bee Bird
We have included another enchanting pet in bumble bee attire, but this one was so appealing that it just couldn’t be left out. The bird we see here is infinitely charming in its yellow-black garb and those two antennae jutting out. 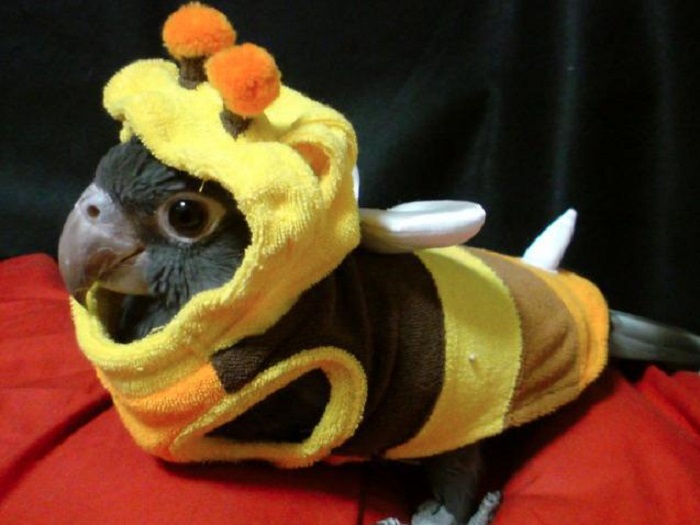 24. Count Vladislaus Dracula
Have you seen anything that could be more endearing than this black Chihuahua? He looks thoroughly winsome in his matching black pullover and the handmade wings. 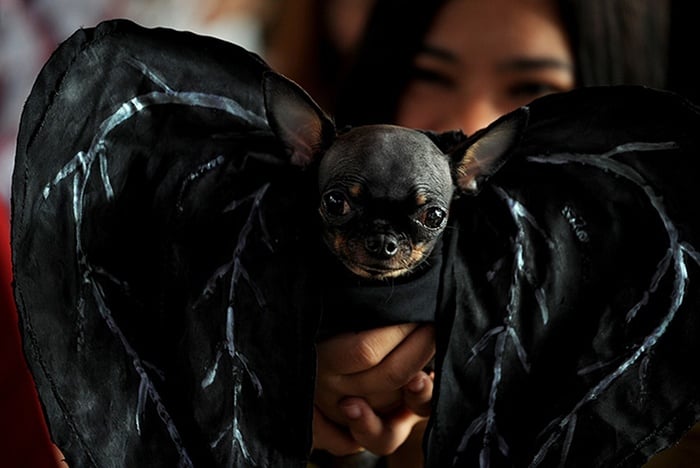 25. The Ghostly Pair
Just look at that pair of goofballs, one a headless ghost, and the other one carrying a bloodied sword. Full points to creativity on the part of their humans, and extra credit to those handsome retrievers. 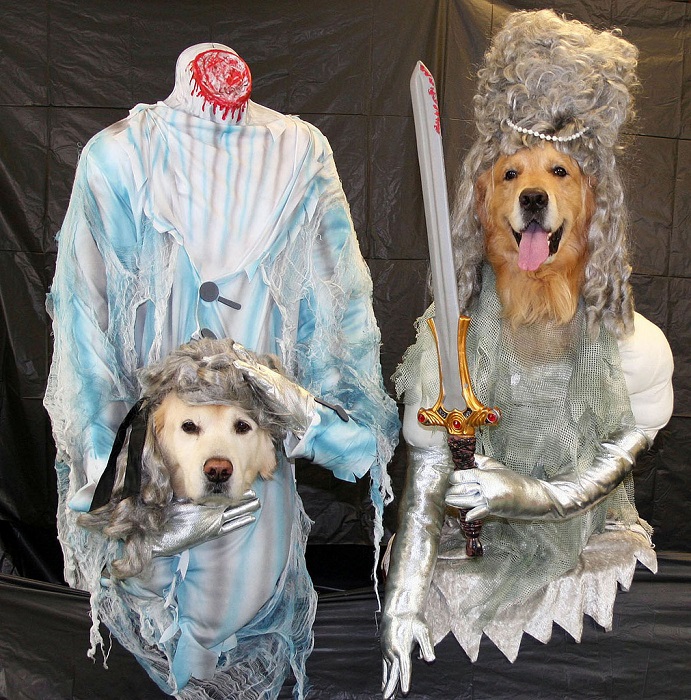 Stumble
If you have dressed up your pets in the craziest costumes ever, please do share your ideas with us.