The Most Hilariously Inappropriate Halloween Costumes For Babies!

“It’s said that All Hallows’ Eve is one of the nights when the veil between the worlds is thin – and whether you believe in such things or not, those roaming spirits probably believe in you, or at least acknowledge your existence, considering that it used to be their own. Even the air feels different on Halloween, autumn-crisp and bright”-Erin Morgenstern. The word or festival Halloween originally dates back to 1745, when Christians celebrated it on the 31st October, eve of all hallows day, also known as all saints day. Today, the festival is celebrated all over the world with a more pagan touch, with the west formulating this day as a country wide costume party and this eye-grabbing trend has gripped millions across the globe who have followed the suit as well. Ideally, a costume party, in which, the main theme is the underworld, gore and appearances synonymous to spirits and ghosts, the trend has slowly shifted onto a more commercial platform, where, dressing up as anyone famous is passable and suiting the spirit of the event. Considering the fact that everyone is clad with costumes, people go to extreme measures to grab attention and while some deserve a pat on their back for their originality with what they wear, there are others who just step over the line of being hideous by a mile. These risible costumes are not just limited to adults, but parents are passing the ludicrous trend on to their children. To prove our point, we have selected 20 parents who have dressed their children in costumes that we would deem inappropriate and chucklesome. Take a look and don’t forget to mention which costume you think is just out of bounds. 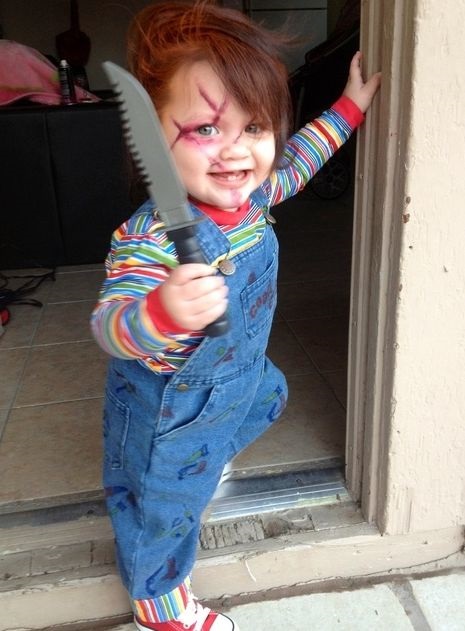 2. Well for most parents, though cute, the sight of this kid dressed as a Marlboro pack and guided by his dad dressed as the widely loved beverage Jack Daniels might spark outrage. Instead of teaching his kid on the dangers of smoking, this dad chose to dress him up as a pack. Having said that, one just can’t hold back a smile sparked by the originality of the costume and the adorability quotient of the kid. 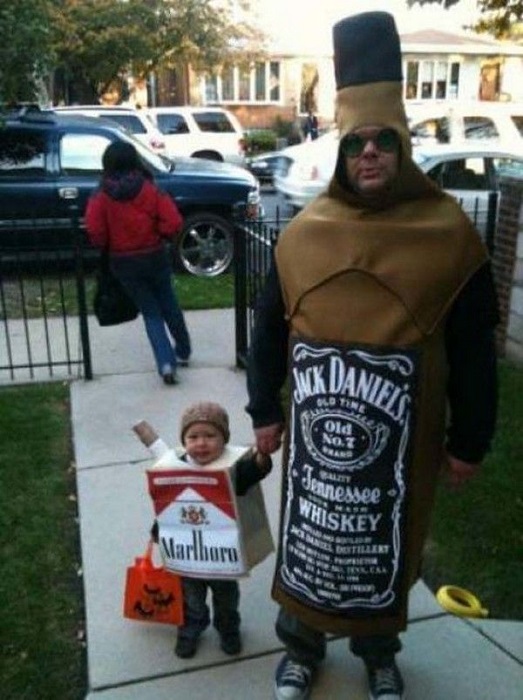 3. Imitating the fitness personality and actor Richard Simmons, this kid is sure grab attention with his costume that emulates this worldwide personality to point. Known for his weight-loss programs and charismatic approach to the same, surely Mr. Simmons has found a fan in this kid’s parents who have draped him to look like their idyllic trainer. 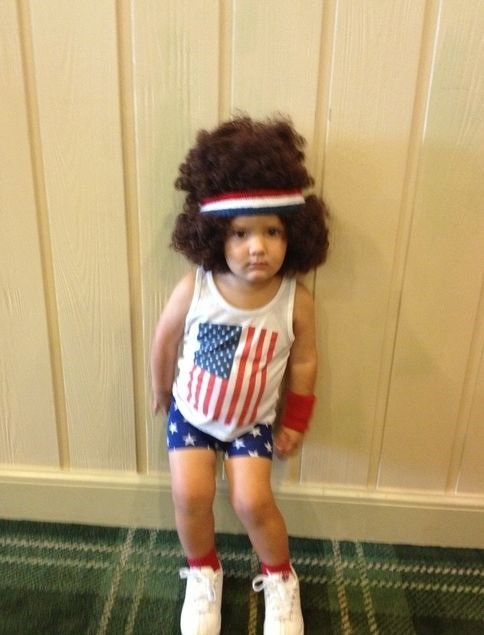 4. I do not know about you, but personally I would rather not have my child dressed as Lil Wayne, the rapper who has splattered headlines with possession of drugs and weapons. Maybe they are big fans, but that been said, credit to them for getting their child to impersonate the rapper with precision. 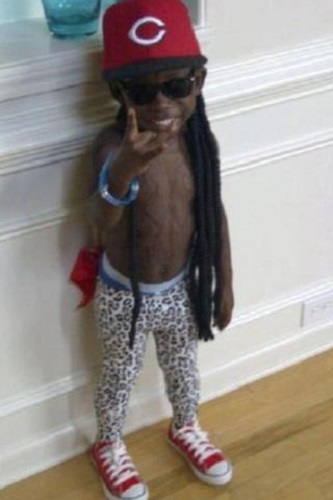 5. The look of this kid says it all, or I’m not sure if he was trained to fix this incredulous expression throughout. But what was mom thinking by wrapping her toddler in an alien protruding vest? 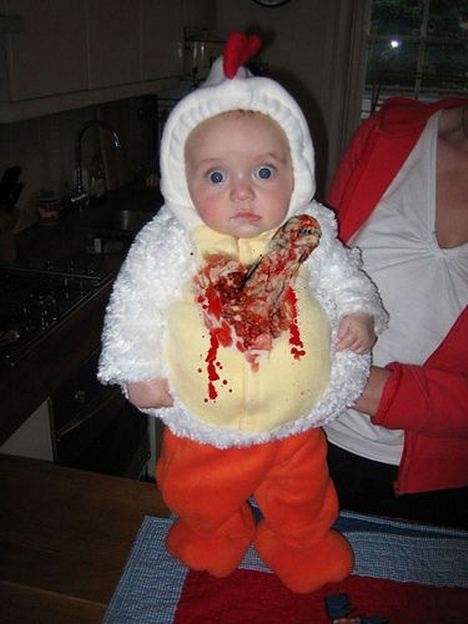 6. We have to admit that the resemblance of this child to American singer-songwriter and actor Prince is uncanny. The swaggy vest, pencil mustache and curly front locks are something characteristics that any Prince fan can relate to. 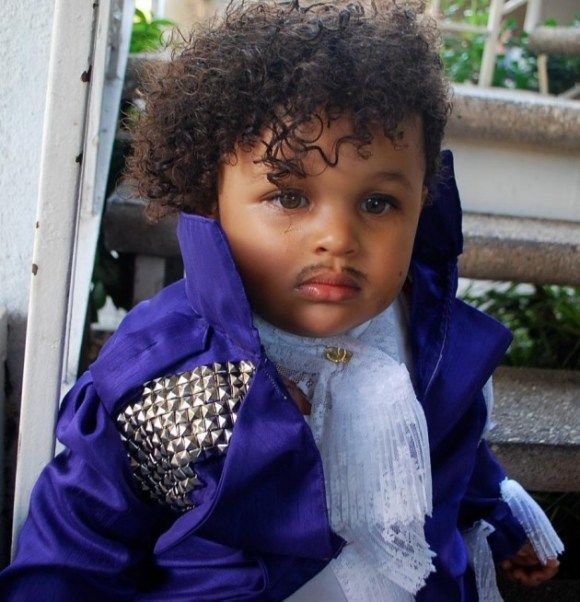 7. Seriously!! Wtf? Despite the fact that this costume is appalling at first sight, we can’t ignore the fact that it does work on the lines of Halloween and is truly spooky. A head in a glass jar held by a headless another is surely a costume that suits the palate of Halloween. 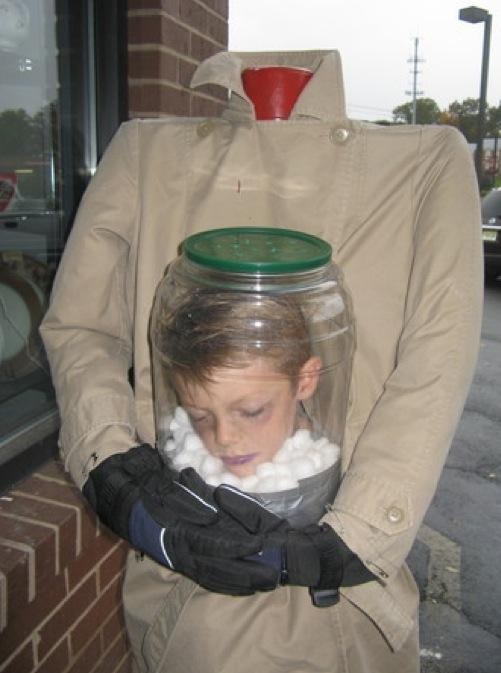 8. If it makes her feel stronger, then why not right? Well I would definitely stop and stare at this little girl who is dressed as a body builder flaunting her bulky arms and rock cut six-pack abs. 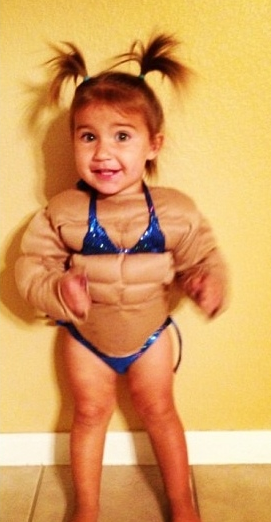 9. We asked you at the start to choose which dress you feel is the most inappropriate on these kids, and if you ask me I would definitely choose this one. Stop looking at that rack and then realize that this girl is trying to mimic her favorite cartoon character ‘Little mermaid’. Unfortunately daddy forgot that even the mermaid in the cartoon had a bra to cover her breasts and did not at least end up looking like a ‘you know what’ doll. 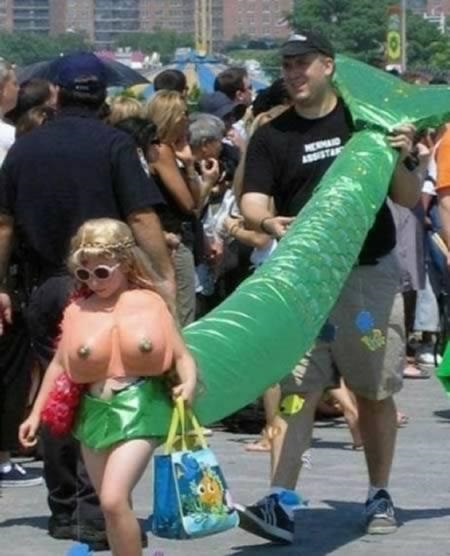 10. Resembling the world’s most famous chemistry teacher Walter White from the series ‘Breaking bad’ and considering the character indulges in criminality to boost his finances can be termed inappropriate for a child to portray this much followed protagonist. 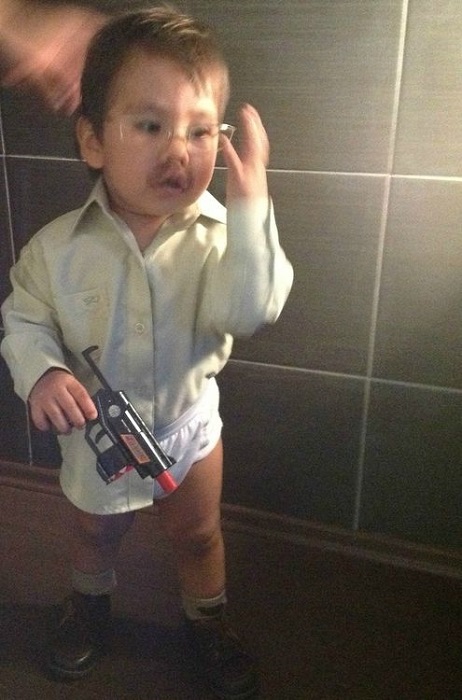 11. Can you recognize who this kid is trying to mimic just with his hair do? Well whether you guessed it or not, it is none other than maverick billionaire Donald Trump. Considering Trump is currently running for the President of the United States, it put this little chap in the spot light amongst other Halloween costumes. 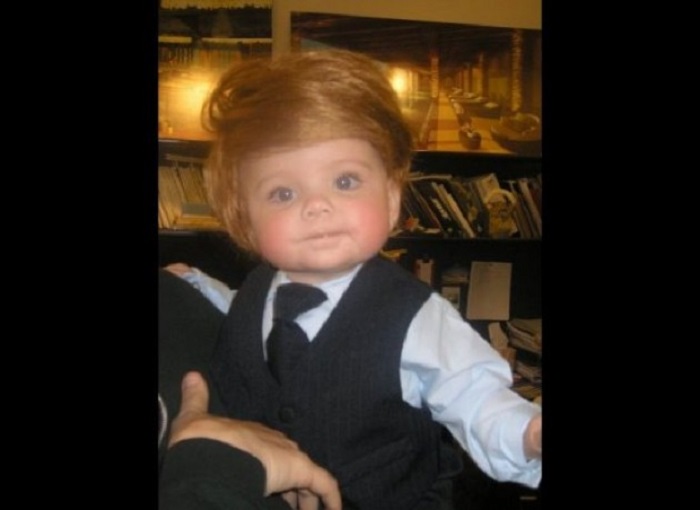 12. Placing any kid in a turkey would result in that petrified look. Hopefully no one mistakes this munchkin for the main course. 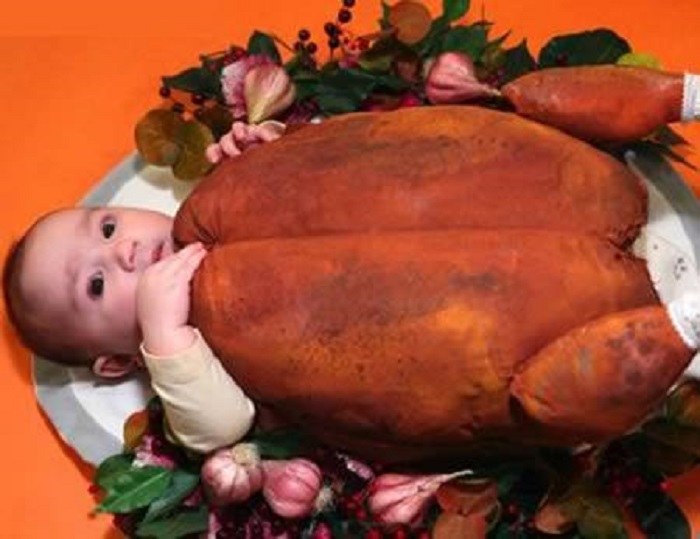 13. Guess what momma and dad’s favorite eatery is? Not much of a head breaker, but hopefully no one mentions it to them that their kid actually looks biteable. Adorable though. 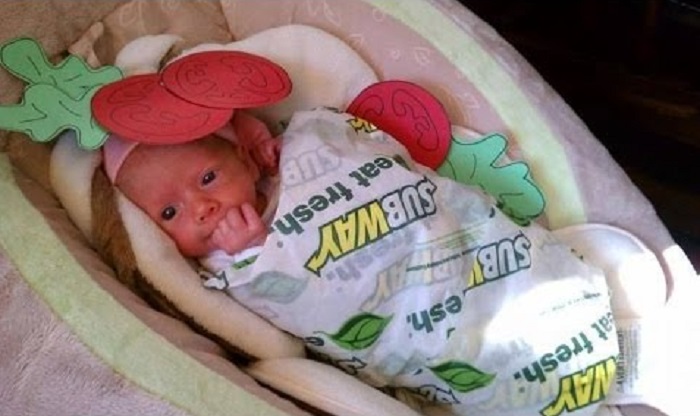 14. This chubby little delight does suit the look though. The cut sleeve T-shirt, the Frenchie, tattoo and bandana does make this toddler fit the bill as a Harley Davidson rider. 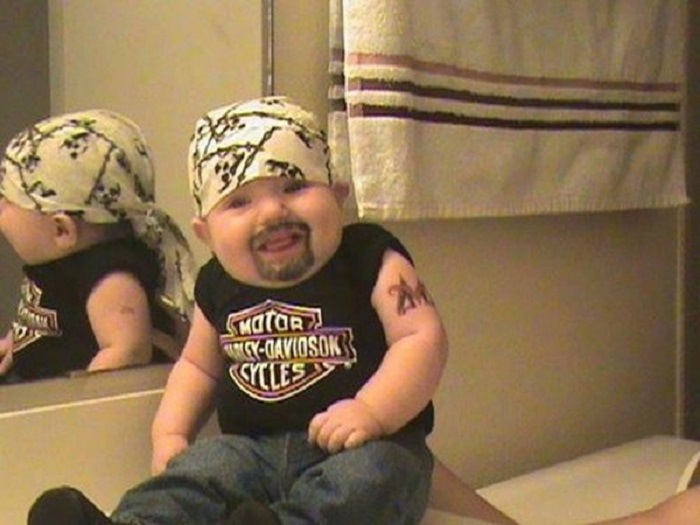 15. So what would be more inappropriate than dressing your kid up as a Psychiatric and cannibalistic serial killer? Dressed to mimic the protagonist Hannibal Lecter played ingeniously by Antony Hopkins in the 90’s and early 2000’s that horrified the masses, this kid is definitely dressed to kill, but only if he wasn’t strapped to a cardboard erected on a stroller. 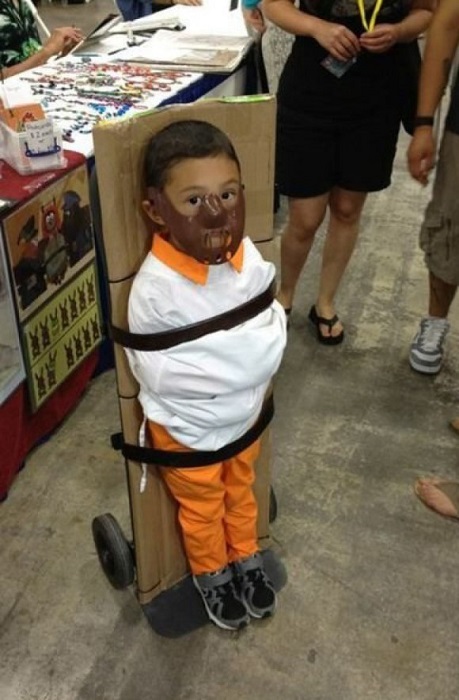 16. If you thought the last kid’s attire was unfitting, this guy is just going to steal the cake with his costume. Now actually, what were his parents thinking? Not sure if other parents would be comfortable with their children hanging out with a kids who is impersonating the Nazi dictator who claimed the lives of six million Jews. Putting aside this indecorous costume, job well done with regard to the impersonation. 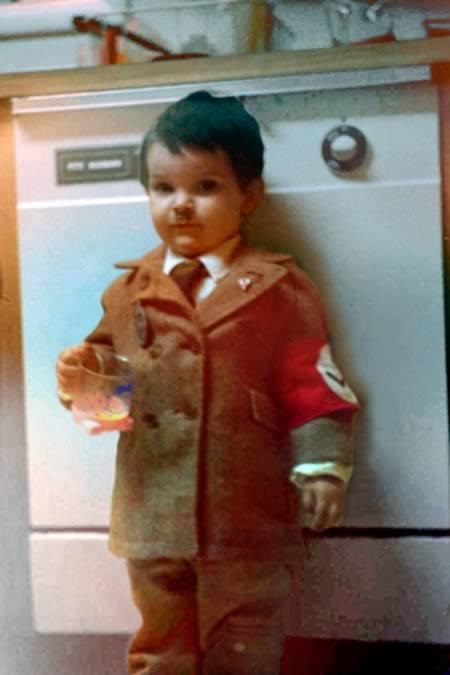 17. Really mom? Dressing your child to play a terrorist strapped to C4? I doubt the caretakers of this innocent kid comprehend the true essence of Halloween. Amongst the various inappropriate costumes displayed above, this certainly could top this list as for some it just might stir disdain, because dressing your child to portray a suicide bomber is unimaginable for most parents, barring this indecorous mother. 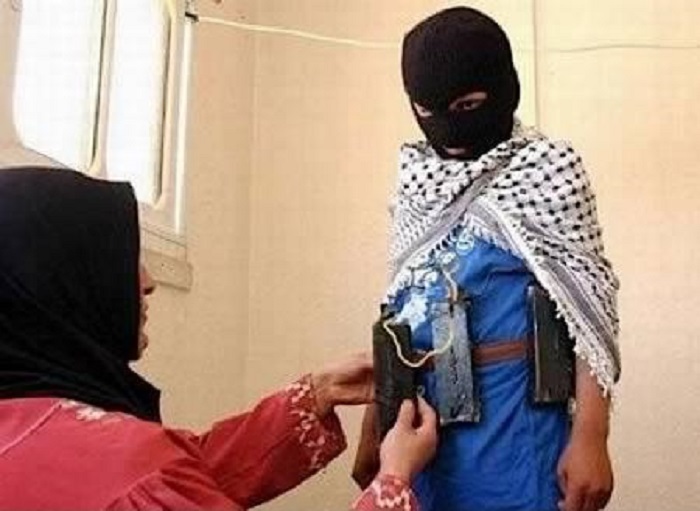 18. Yes, let’s fill the festival of Halloween with some spirituality. Needless to say but this kid dressed as Dalai Lama did make me chortle. 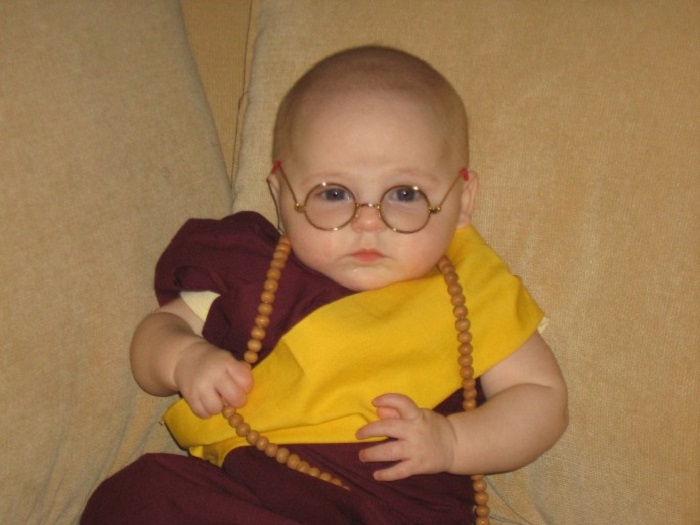 19. Certainly this toddler does not yet have the strength in her footing and the crutches do come in handy, but the very sight of this kid made me go awwwwwww. This adorable girl does grab attention and hats off to the parents for their originality. 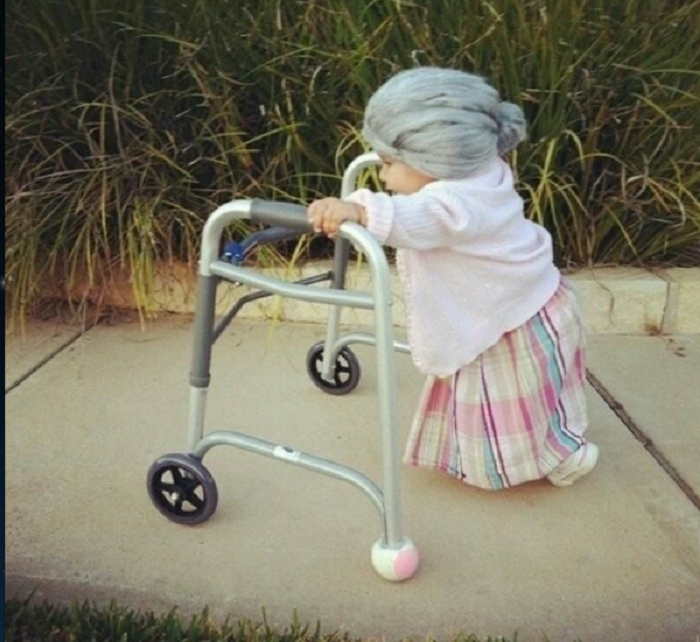 20. Mimicking the look of Water White and Jesse Pinkman from the series ‘Breaking bad, ’ these kids do look the part but I’m am not too sure that dressing your kids up as crystal meth dealers comes under the category of appropriate. I certainly hope that the candy held by the bloke isn’t supposed to represent the drug. Good job on the impersonation I would say. 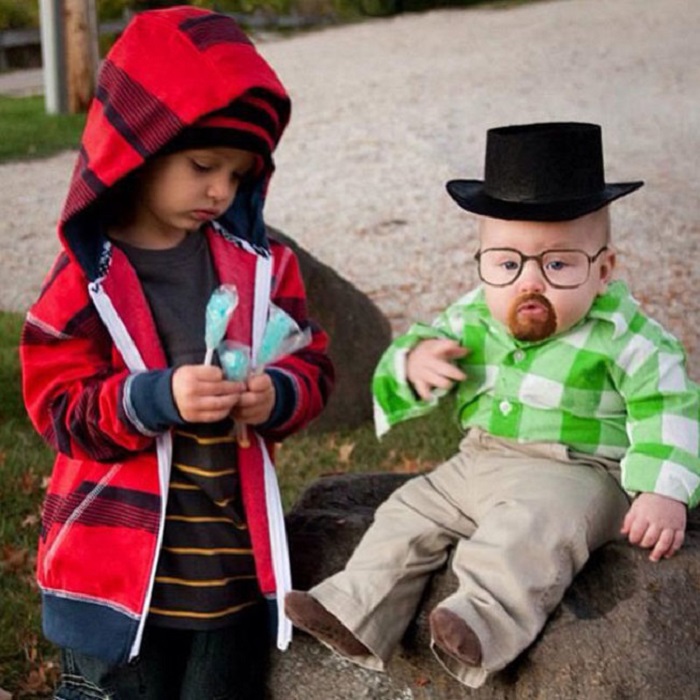 Stumble
Which one of these costumes you think was the most inappropriate? Take your pick!!

Which one of these costumes you think was the most inappropriate? Take your pick!!
Share On Facebook