Bhangarh Fort: The ‘Most Haunted’ Place In India—Haunted Stories & Mystery of Bhangarh Fort

The Bhangarh Fort, situated on the Aravali Range, near the Sariska Tiger Reserve, was built as a city by the ruler of Rajasthan, Sawai Madho Singh, and expanded later by his son, Bhagwant Das. However by 1630A.D, after the demise of King Chhatr Singh, the town was already on the verge of getting wiped away. It remained in Mughal hands till Aurangzeb’s death, and was later seized by the ruler Jaisingh II.  It seemed that the city was doomed forever, since by the year 1783A.D, a famine had ensured the end of the residing population there.
The ruined fort city does have several temples, dedicated to deities like Hanuman, Mangla Devi, Gopinath, Ganesha and Someshwar. What is unusual about these temples is the fact that they have been constructed resembling tombs. The most eye-catching features of this fort are the ‘Jauhari Bazaar’ and the ‘Nachan Ki Haveli.’ The fort has four intricately designed gates that were built to protect the city, the Phulbari gate, Ajmeri Gate, Lahori Gate, and the Delhi Gate. There are remains of shops that had been built surrounding the fort. Standing atop this fort that was once a prosperous town where a visitor can view the entire city. 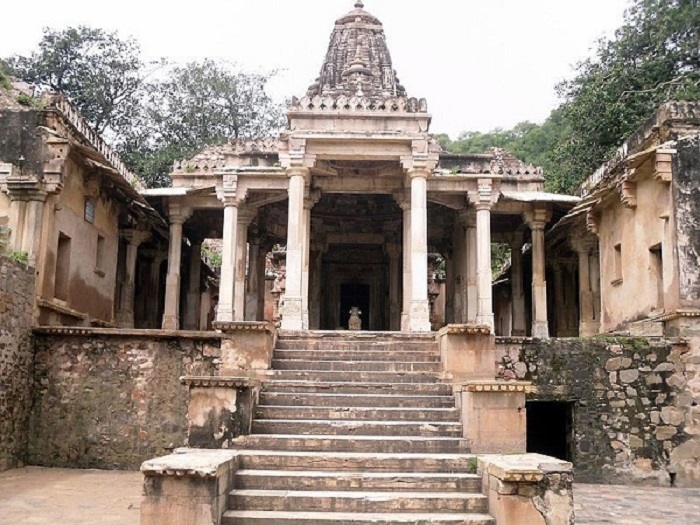 Though not a recommended tourist destination, visitors do flock to the old city, just out of inquisitiveness from the stories woven around the history of the place. Reaching this magnificent structure is quite easy, if you are travelling from Delhi. The Bhangarh Fort is located only three hundred meters away from Delhi, and takes about four hours of travel time. Though the drive may be slightly uncomfortable, the roads do have numerous eateries and tea shops.
The Bhangarh Fort is considered to be one of the spookiest places in the world. Though there are skeptics who are cynical about the presence of ghosts inside the fort, it is believed that there is some truth to the legends that surround this spectacular structure. This belief is strengthened further when you see the statutory warning issued by the Archaeological Survey of India. The notice states clearly that no visitors are allowed into the fort after sunset and before sunrise. Though not a direct acceptance of the fort being haunted, it definitely gives out a hint of lurking danger. There are mainly two legends that suggest that Bhangarh is bewitched. 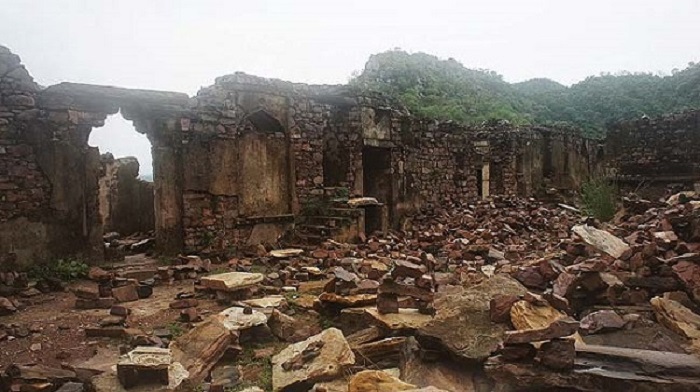 1. Guru Balu Nath’s Egocentric Curse
Legend has it that a well-respected ascetic named Guru Balu Nath gave permission to the residents of the fort city to build their own houses, provided none surpassed his own abode in height. This included the construction of palaces inside the city. He declared that if any house or palace casts a shadow on his residence, he would ensure the demolition of the entire fort.

However, as an act of defiance, a man built a house that was taller than Guru Balu Nath’s, and true to the sage’s word, soon enough the city fell into ruins, killing all its inhabitants. 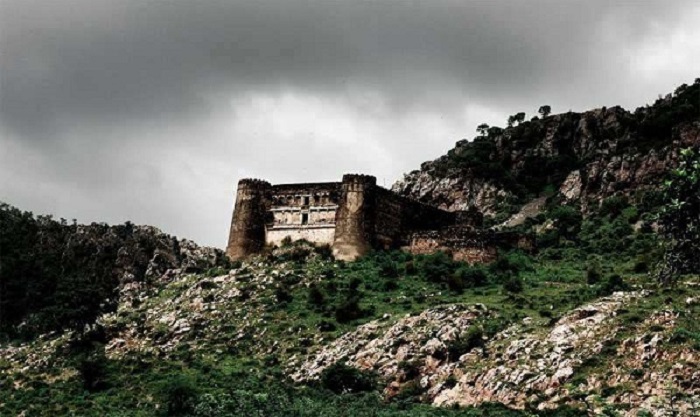 2. Lovelorn Singhiya’s Fateful Malediction
According to another tale, the young and beautiful princess of Bhangarh, Ratnavati, had caught the eye of Singhiya, an expert in black magic. Aware of the fact that Ratnavati would otherwise never marry him, Singhiya concocted a love potion that would attract the princess. However, his emotions were not reciprocated, and after getting caught red-handed by the princess, Singhiya’s potion was thrown to the ground. The potion seemingly did its magic, and a rock appeared out of nowhere, crushing the wizard to death. It is believed that just before he died, Singhiya cursed the citizens of Bhangarh, saying that no one would ever be able to live in the city ever again, and only the temples inside the fort would survive.
Consequently, the fort city was conquered and plundered several times, and all the 10,000 inhabitants were killed in the battles that followed. 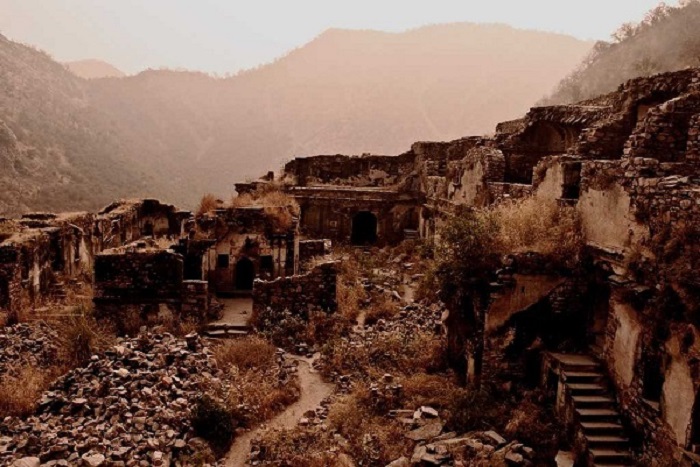 These curses seem to have actually taken effect, according to several reports and local witnesses. Some local residents believe that the spirits of both Princess Ratnavati, and her love-struck admirer Singhiya, are entrapped inside the fort. Others believe that Ratnavati was reborn somewhere else, and Singhiya’s spell would be broken only when the Princess arrives. Many others believe that Balu Nath’s imprecation is what has brought about destruction of the city.
It is a custom in Bhangarh to build houses without roofs, because one with a ceiling invariably collapses, no matter how strong the materials are. Several paranormal incidents have occurred in the fort and its surroundings at night. The atmosphere is eerie and gloomy, even during the day, often overshadowing the architectural brilliance of the Bhangarh Fort. Reaching there sometimes means overcoming several impediments, and this makes people wonder if these haunted stories are really true. At night, it is assumed that this imposing old city changes from an exotic creation to a lair of death. Residents living close to the fort have often heard music playing inside the old ruins, and sometimes the wailing of a woman, all during the night. Several missing cases have been reported of visitors to the fort after dark—people who stay in the fort after sunset, it is believed, never come back.
Despite the stories of hauntings at the Bhangarh Fort, there are always daredevils who want to prove the world wrong. One such reported instance was of a young boy who visited the fort at night, equipped with sufficient sources of light. However, he tripped and fell into a well located inside the fort. He had to be rescued by two of his friends, but on their way to get immediate medical attention, they met with an accident, and all of them were killed on the spot.
These stories are often contradicted, despite the prevalent fear amongst locals. Some come up with the logical explanation that animals from the forest nearby live inside the fort at night, and this could account for the unnatural noises often heard after sunset. Some people also argue that the gods protect people, and good always presides over evil. Then how could a place be haunted if it houses so many temples? The question is yet to be answered, but the local villagers and even the Archaeological Survey of India (ASI) are not ready to take a chance. A new village of the same name has been constructed just outside the fort, with about 200 families, and the ASI has ensured that their office is located at a good distance from the dilapidated city. So, if you want to visit the spectacular city of Bhangarh, do so in the morning, and in case you want to take a chance by going there at night, do so at your own risk.