On March 6, 2011, the streets of Hyderabad put on a new face. Instead of the usual corporate sight that greets the setting sun, the people of Hyderabad looked rather peppy and jovial and more in the spirit to soak in the atmosphere, than just rush home after a hard day’s work. Talking about work, most of the bosses in the city had to deal with the fact that most of their employees either just didn’t show up or rather took off stating an unprecedented sickness as the reason. Almost everyone in the city was in the mood to just celebrate, and why not? The prince of their hearts was marrying the woman of his dreams. Yup, we’re talking about Allu Arjun and Sneha Reddy. 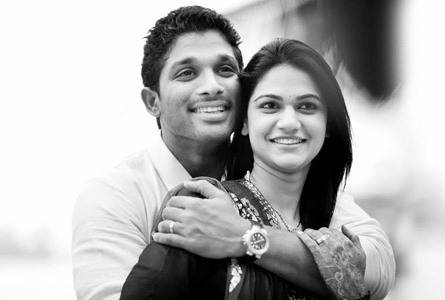 Arjun was destined to live a fairy-tale life, after-all he hails from the one and only Chiranjeevi family. The nephew of super star Chiranjeevi, Arjun over just a few years has become one of the most sought-after South-Indian actors.

His scintillating dance moves coupled with his ability to make an audience cry and laugh in a matter of seconds has deservedly brought him to the top of the ladder of the South-Indian film industry.

While gossip columns and tabloids quite often assumed him to have had alleged affairs with his gorgeous co-stars and other celebrities, Arjun waited for the right moment – for the flower in his heart to blossom – and it did. Little did he know that a trip to the United States for a friend’s wedding would change his life forever. 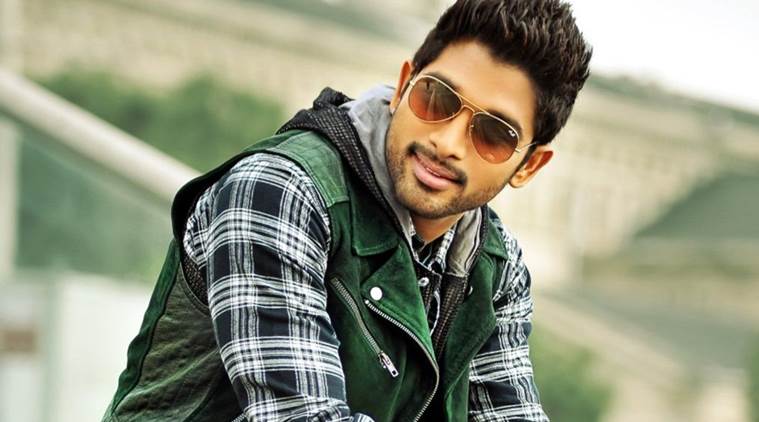 Photo Credit: http://www.nowrunning.com/allu-arjun-couple-blessed-with-a-baby-boy/93017/story.htm
When They Met!!

By the time the duo had met and eventually fallen in love, Arjun was already high-flying with his success in the South-Indian film industry. Now one of the most loved actors in Tollywood, Arjun scorched the screens with his performances in movies like Arya, Race Gurram, Vedam and his note-worth performance in Parugu.

His impersonation of a lover-boy every girl would only dream of having in Gangotri made him a mainstream superstar and his performance in Bunny (which is his nickname) only proved that he is an actor producers can trust to bring in the masses.

His theatrical style sugared by his quick step dance moves enthralled audiences, movie after movie amassing him the largest fan following for a South-Indian actor.

He now has a little over one-crore followers on Facebook. Strangely for a Tollywood actor, Arjun has even a huge following in Kerala and has even tagged himself “Mallu Arjun” to please the masses down south. 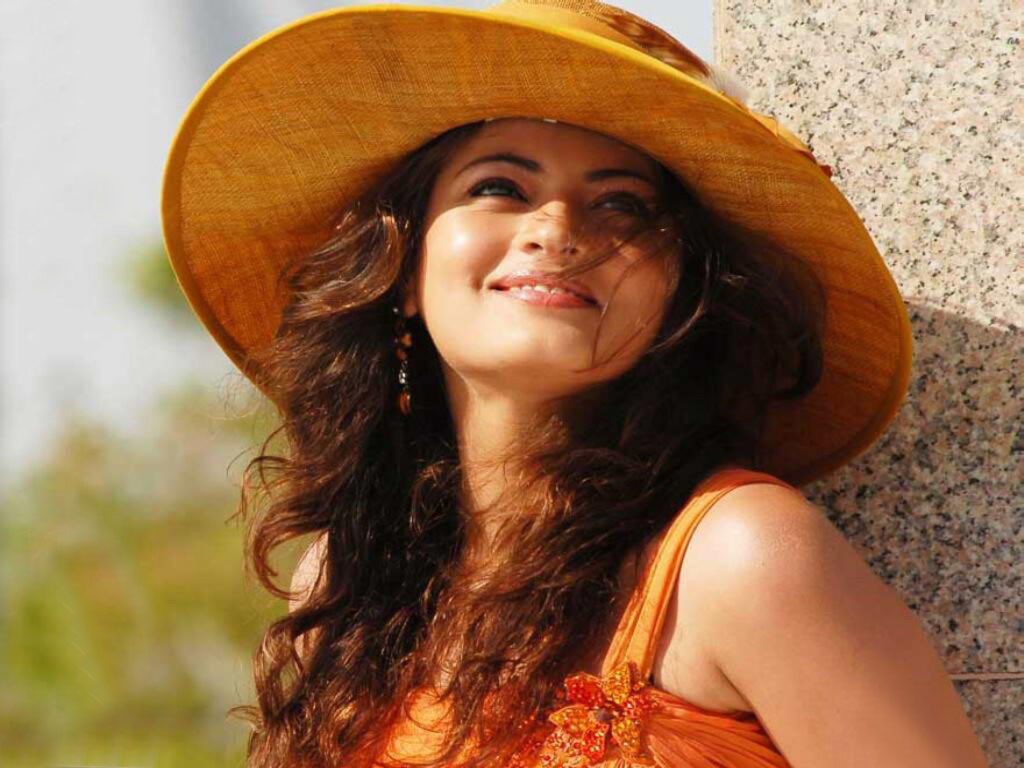 While Arjun was garnering all the fame he could ever get in one lifetime, Sneha, the girl who would eventually become his wife, was focused on forging a career for herself. With her father K.C Reddy being a noted entrepreneur and the founder of Scient Institute of Technology in Hyderabad, Sneha too followed suit by graduating from the same institute.

Post that, she shifted to the United States to do her Masters in engineering. It was during her course that she went for a friend’s wedding, where she met the man that would sweep her off her feet.

Though Sneha had just known the name of Allu Arjun, she had never watched his films or had known how famous he really was.

The two met at the wedding for the first time and for Arjun, it was love at first sight. Her mix of beauty and brains got him weak in the knees.

After being coaxed by his friends to message her, he did so and to his relief her response was immediate and amicable. 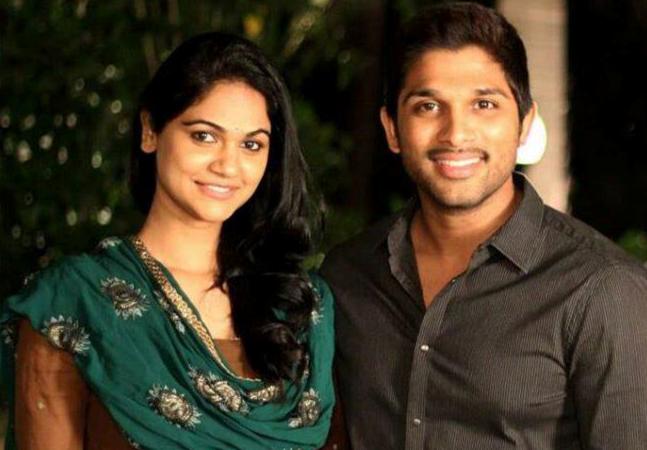 The two messaged each other for a while before eventually cupid struck making them almost inseparable. Few months passed and Arjun expressed to his family his desire to marry Sneha.

Certain reports state that his father Aluu Aravind initially refused the match but after seeing the love in Arjun’s eyes for Sneha, he obliged. Not only did he give them his blessings, he spoke to Sneha’s father on their union, making matters easier for the couple to move ahead with proceedings.

He once said, “My family knows what’s best for me. They will definitely choose the perfect match”, and almost true to his words they did agree to the match he chose.

The Engagement That Broke The Hearts Of South Indian Damsels!! 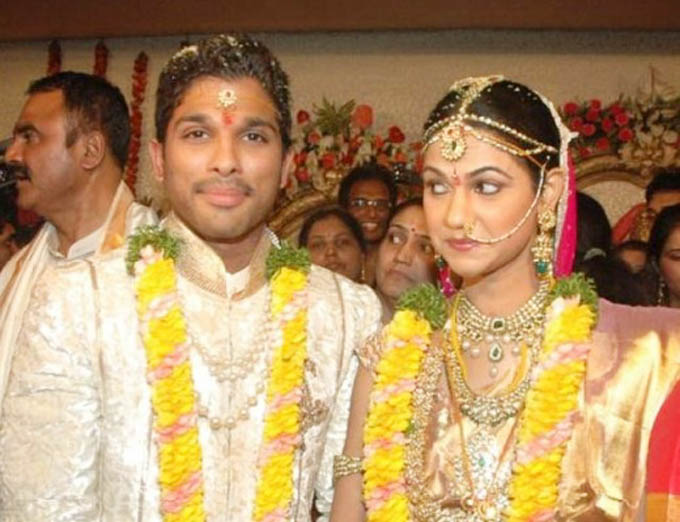 Held on November 26th, 2010, at the Novotel Hotel in Hyderabad, the couple decided to make their first steps to becoming one, amongst the splendid floral arrangements, yellow lights and drapes to give it that extra classic touch.

The event was held only for their closest family and friends. Sneha lit up the room with her green Sabyasachi saree which sported tasteful golden embroidery. The jewelry on her neck and head combined with her long luscious hair that made her look like a typical beautiful South-Indian bride.

Next to her, Arjun sported a white blazer over a white T-shirt, he too did add to the vibrance that filled the Novotel Hotel.

The event was designed by the best in the country, and even the invitation was thought through- A two-tiered box, one for sweets and the other the actual invitation. The surface of the box was a tribute to Lord Tirupati Balaji. 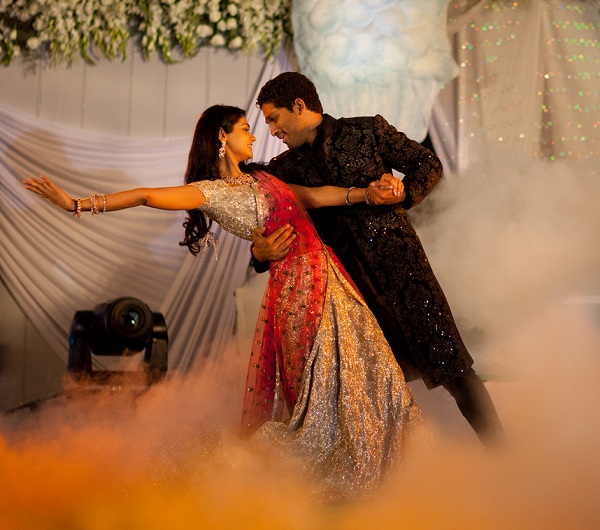 Always the most fun part of any wedding, the Sangeet ceremony usually breaks the ice between the two different families and friends. The songs and dance routines is just the perfect way of doing it and it was of no shortage at this ceremony.

Held at the Taj Krishna on 4th March, 2011, the very aisle leading to the hall of the ceremony donned an exquisite floral setting fitting for a King and Queen.

Wearing a black sherwani, Arjun dedicated the song ‘Nijanga Nenena’ from Kotha Bangaru Lokam to his lady love, leaving her in tears and the guests clapping with excitement. Though he doesn’t have much of a voice, the love emanated was all the ceremony needed.

In the presence of numerous friends and Tollywood stars, the couple got on stage and proved why they are just meant to be. They danced the night away with their talented quick feet leaving everyone around them with the warmth of love that encompassed the beauty of the ceremony. 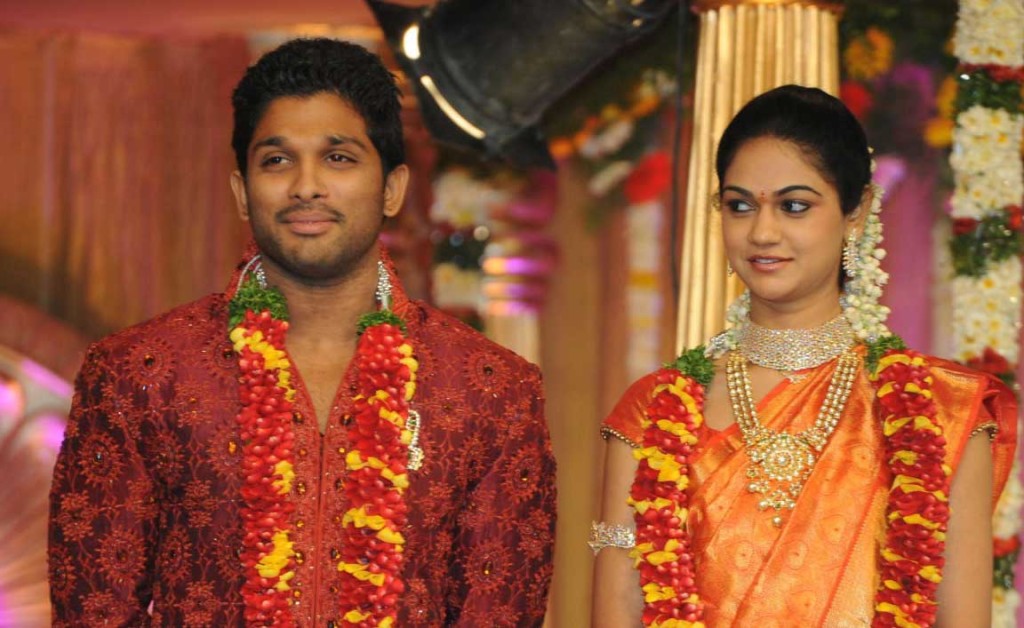 Held on March 6, 2011, the wedding practically brought the city to a standstill. The fact that Arjun did not leave his fans out from the biggest step in his life made it even livelier. Not only were the fans invited to witness this spectacle, the wedding was broadcast by several new channels, giving his millions of followers a glimpse of this fairy-tale like wedding.

The venue itself was as good as a production of a South-Indian film set with it being converted to replicate that of the Tirupati temple, while all the statues of the Gods were placed around the venue, illuminated by violet lights.
The floral arrangement matched that of any grand palace and the gorgeous couple looked no less than royalty as well. Wearing a Kanjeevaram saree, embellished by her diamond and emerald necklace and jasmine flowers, Sneha looked like a quintessential Indian bride. Clad in a white sherwani, Arjun looked dashing as he exchanged glances emanating pure love to the bride by his side. 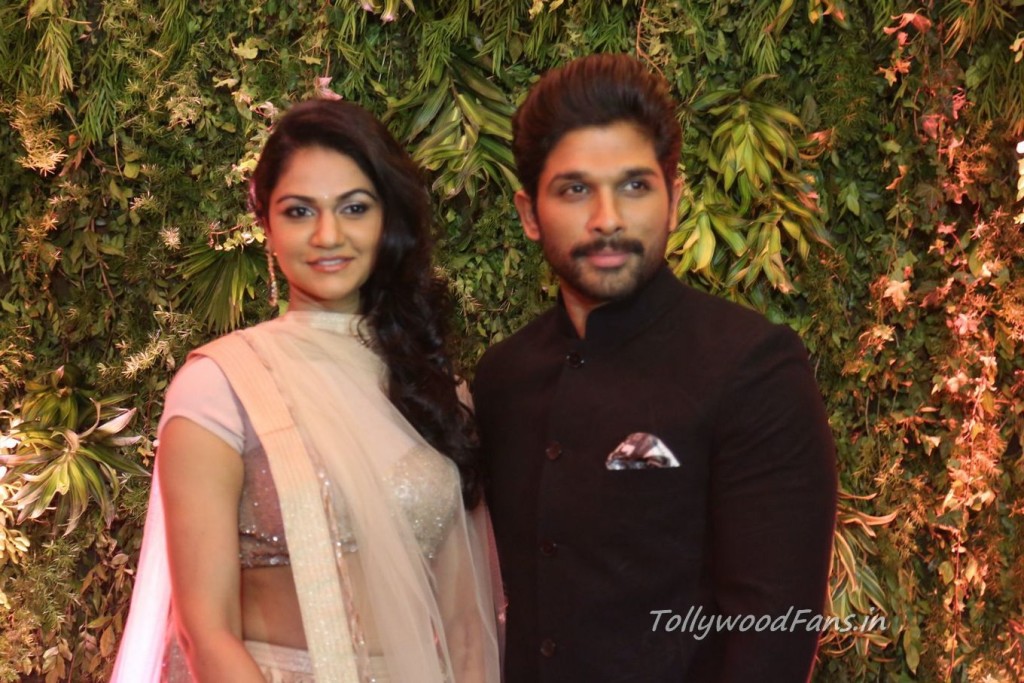 Photo Credit: http://southms.blogspot.in/2011/03/allu-arjun-sneha-reddy-wedding.html
The Reception That Made South India Glisten!!

Held at the Shilpa Kala Vedika in Hyderabad, Arjun insisted that even his fans be a part of this huge step in his life.
Thousands thronged to catch a glimpse of their superstar, bringing the city to complete standstill.

Wearing an embroidered red sherwani, fans just couldn’t take their eyes off their stunning hero. Standing next to him was his wife clad in a traditional saree that made them look picture perfect.

Photographer Joseph Radhnik was the man behind the lens, making sure he got this starry affair immortalized with his pictures.

There Were Two… Now Three – The Birth Of Their First Child, Allu Ayaan! 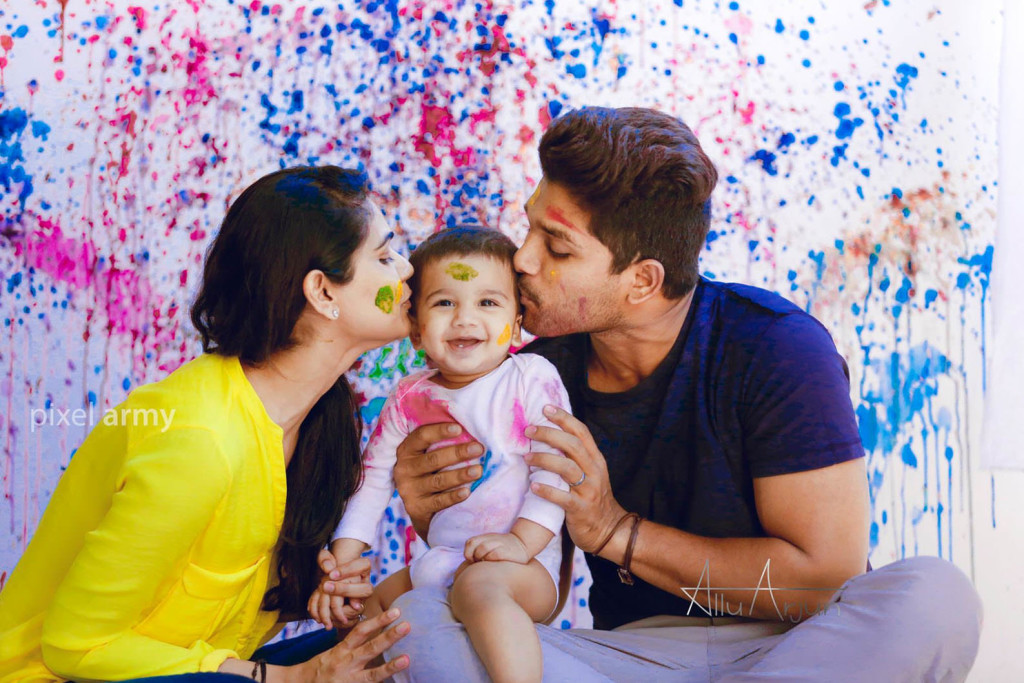 Their love blossomed further and to the joy of everyone they welcomed a baby boy. In 2014, the couple had their first name and called him Allu Ayaan. We sense a star in the making in him already and having said that, we wish this gorgeous couple the very best. 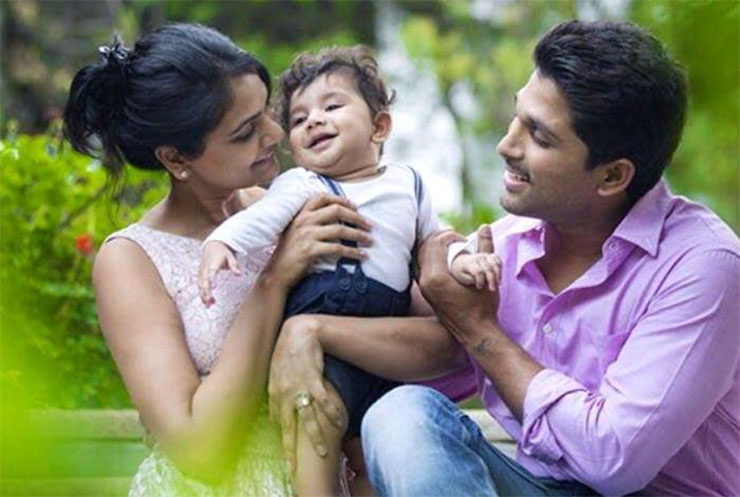