Ever wondered what it takes to get that envious perfect shape which your favourite celebrity has? The tinsel town and the showbiz look shimmery but the road to the top is not easy. While your favourite idols are always beneath the lens, they need to look perfect from head to toe. It is not easy for them to attain that perfect shape and to maintain it; after all they are also humans. They put in a lot of effort and are guided by experts of the fitness industry. Under the expert supervision of these fitness gurus, your favourite celebrity looks hot, stunning and flaunts that beautiful body. We are always curious to know the people behind the beautiful bodies of our favourite celebrities. Here are some of the top celebrity fitness trainers who are behind fit, smart, beautiful, sexy and admirable physique of your loved celebrity.

In Ghajini, Amir Khan’s look was appreciated by one and all and his anatomy became the talk of the town. The man behind all this was Satyajit Chaurasia. Besides Amir Khan, Saif Ali Khan and Zayed Khan also owe their chisled frame to this man. Satyajit also runs a gym named Barbarian in Mumbai which is one of the sought after places for many celebrities. 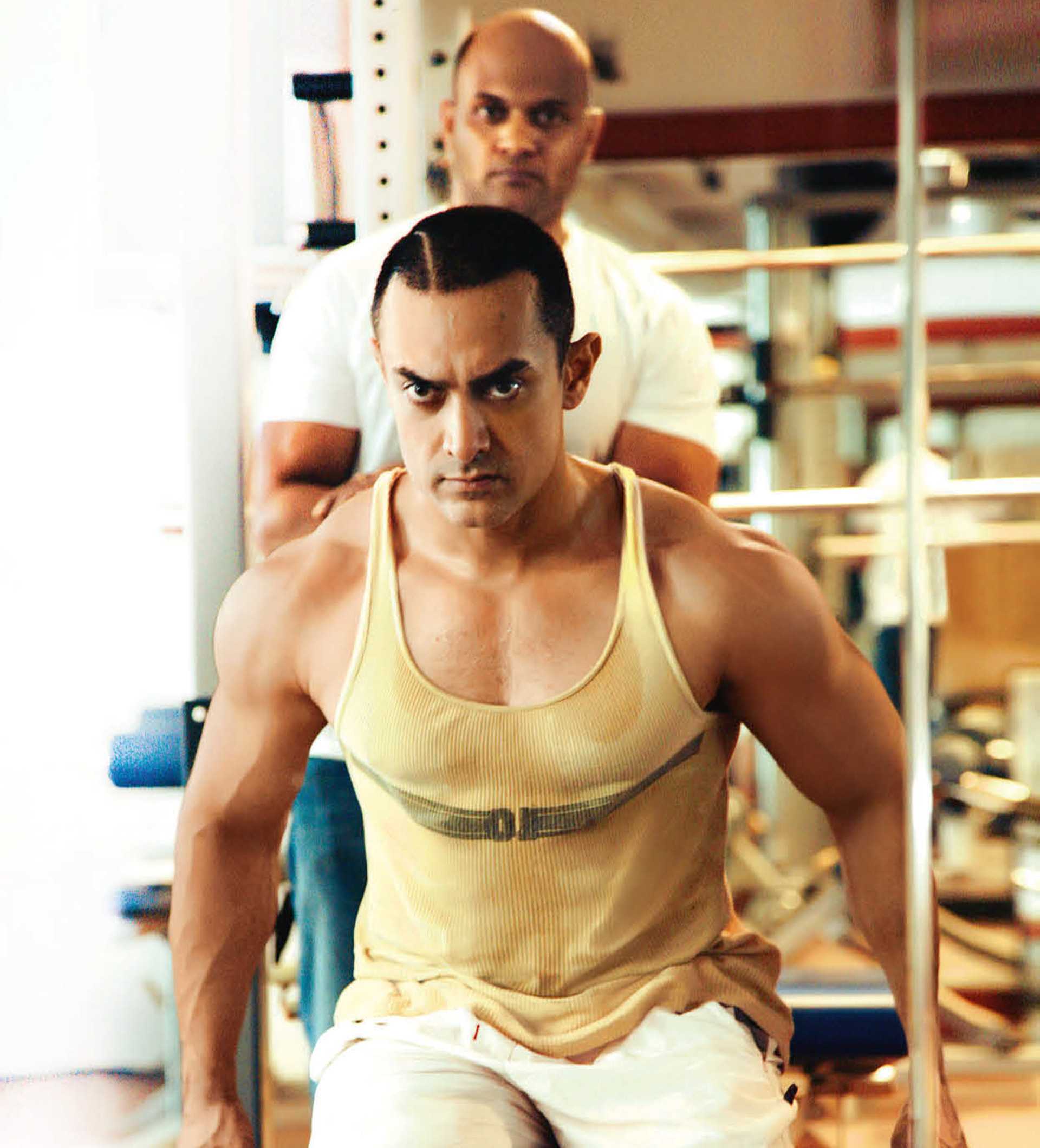 I am sure no one can ever forget Farhan Akhtar in Bhaag Milkha Bhaag. Obviously, while Farhan’s hard work and endurance for his role cannot be ignored, so are the efforts of Samir Jaura who worked with Farhan for more than six hours every day, and that too for more than a year. 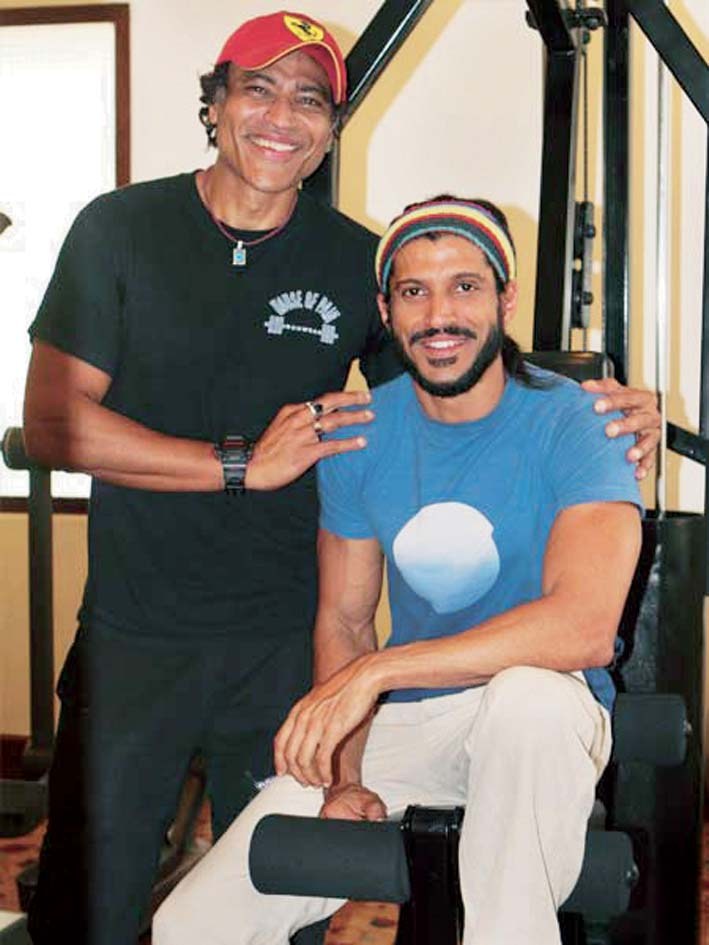 He is a big name in the fitness industry. Shahrukh Khan created a lot of buzz with his body in Om Shanti Om and if you fell in love (read again) with him in Jab Tak Hai Jaan and Happy  New Year, you should instantly thank Prashant Sawant for his efforts which helped King Khan to get that physique. Prashant is also the man behind the action star Ajay Devgan. 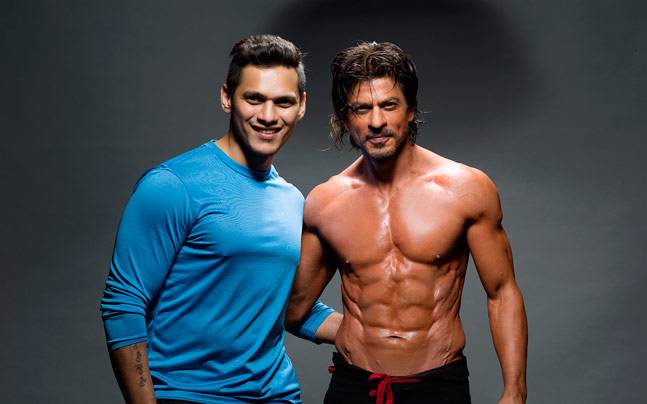 Girls drooled over the song ‘Tithar’ from the film Ram Leela. They went crazy when they first saw Ranveer Singh without shirt and with those abs. All thanks to Lloyd Stevens, his personal trainer from America who within six weeks brought this covetous transfiguration. 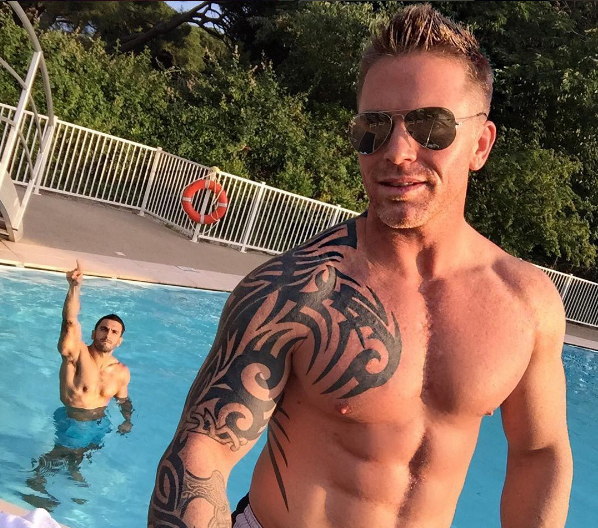 The heartthrob of Bollywood and the chocolate boy whose smile and dance moves make million hearts skip a beat, Shahid Kapoor also flaunts a great body. But it’s not only dance that keeps him fit. Behind his frame is the hard work of Abbas Ali who makes the actor look awesome. Abbas has almost 20 years of experience as a fitness trainer, and he has trained several celebrities from the entertainment industry. From Shahid Kapoor to Shilpa Shetty, Ashish Chaudry, Anil Ambani, Sonakshi Sinha, Zareen Khan to Nikitin Dheer, Abbas has shows relentless determination to remain in the big league.

Zareen Khan’s Incredible Weight Loss Journey Will Inspire You To The Core! 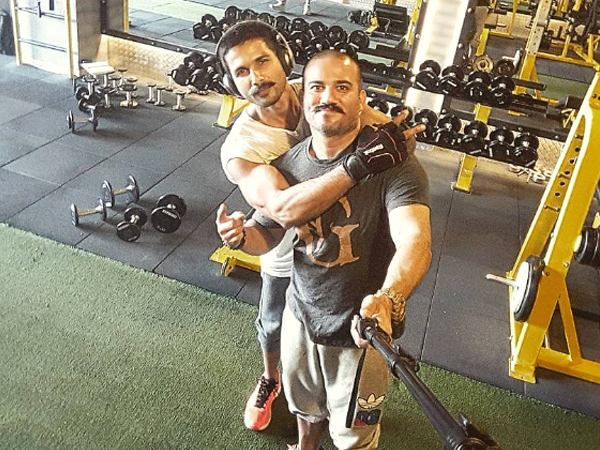 Hrithik Roshan owes his perfect abs and fit body to this American Fitness Trainer. He was behind Hrithik’s super body in the avatar of a super hero in Krrish 3. Kris is also the man behind John Abraham and Ranveer Singh’s chiselled bods. He is a tough taskmaster, and has worked with some of Bollywood’s hottest stars to get those rock-hard six-packs. Kris Gethin is a well-knwon international trainer and partner at Physique Elite, Global Network of Elite Fitness Trainers. He is author of the best-seller, ‘The Bodybuilding.com Guide to your best body’. The book explains his revolutionary 12-week diet and exercise programme that transformed several thousand people all over the world. 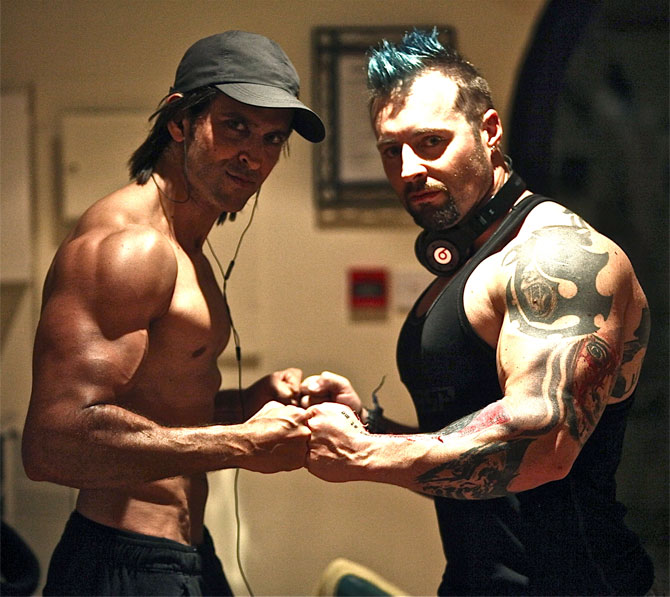 When it comes to showing off biceps, triceps and flaunting those abs, Salman Khan’s name cannot be missed. When he first went topless and flaunted his biceps, triceps and six pack abs, he inspired many to follow the path of strict regime and became can Eye Candy for women. The man behind Salman’s awesome body was Manish Advilkar. These two men worked out together for almost six years after which Salman Khan started working out on his own. 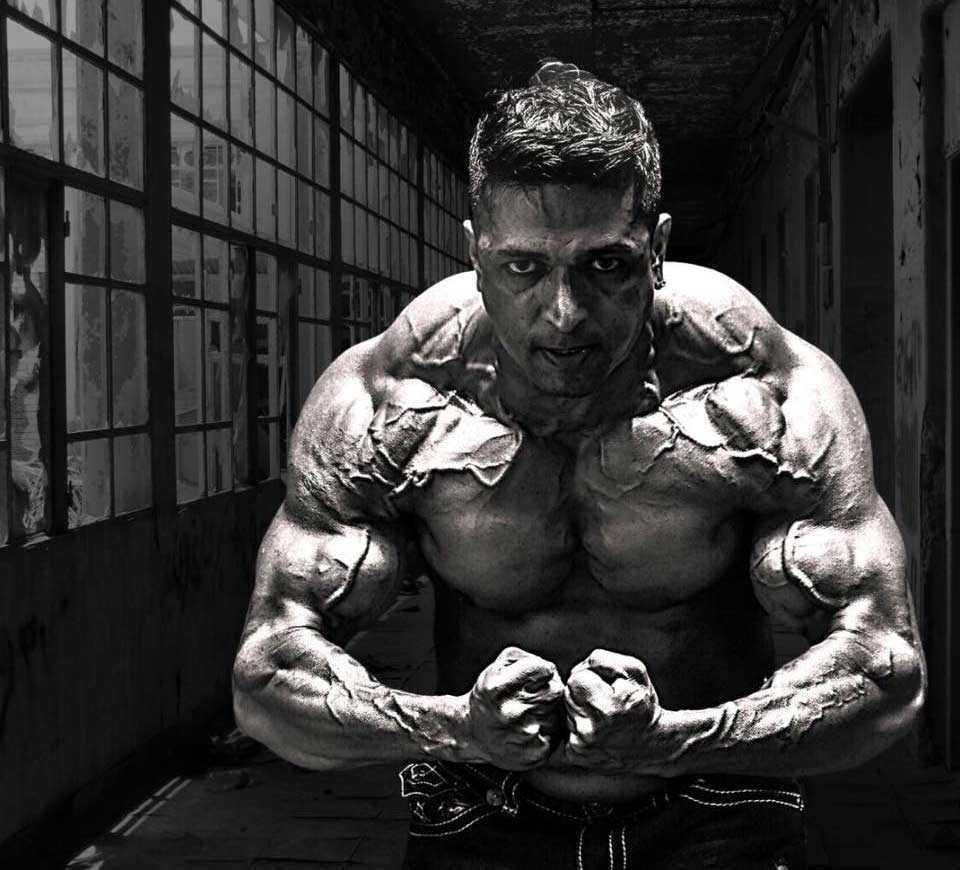 Looks, complexion, eye colour or features can be inherited but a toned body and physique that can kill has to be attained with endurance. Pradeep Bhatia is the man behind the killer body of Bollywood superstar Ranbir Kapoor. Not just Ranbir, Pradeep Bhatia is also the reason behind the toned and sexy body of Deepika Padukone and has also worked on Arjun Rampal, another hottie from the tinsel town that we cannot miss. Wink. 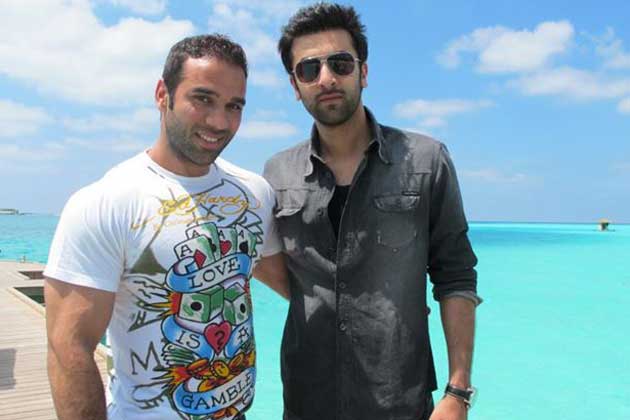 Ranvijay Singh, the sought after VJ, Roadies winner and host turned actor owes his perfect body to Praveen Tokas, the celeb trainer, who has also worked with Emran Hashmi and Imran Khan and Vir Das on their bodies. Praveen Tokas is an expert in Restorative Yoga, Swimming, Strength and Conditioning and Medical Exercise. 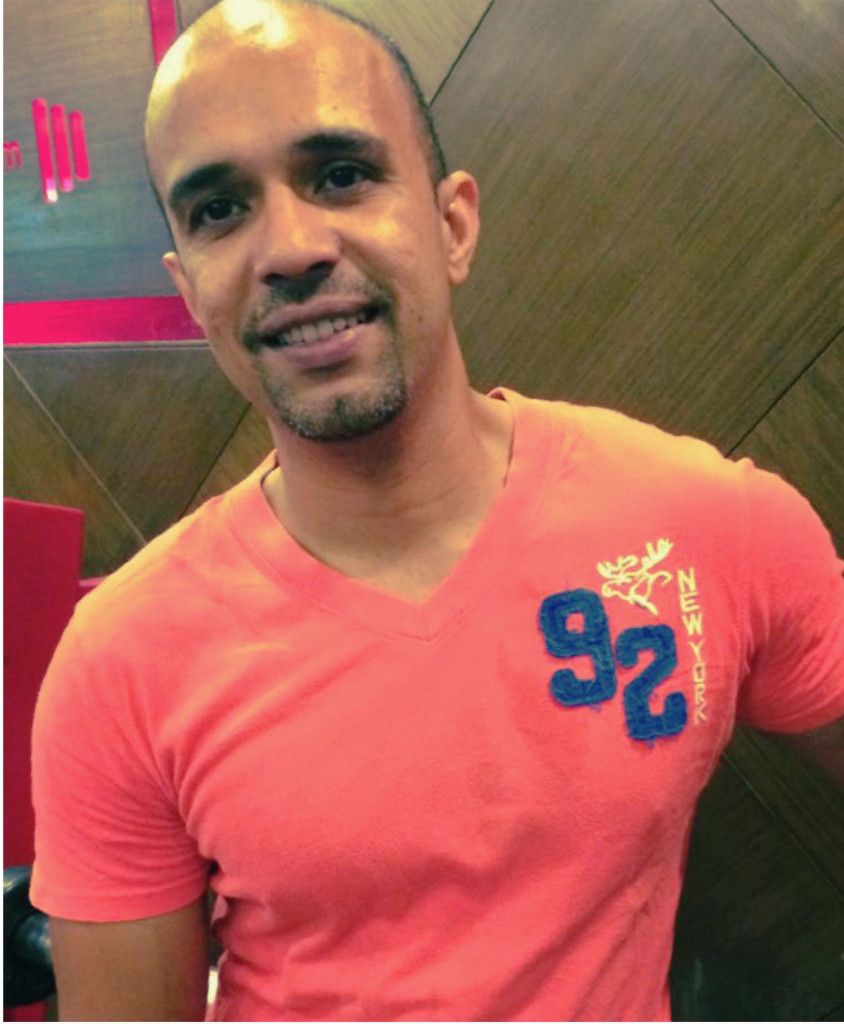 John Abraham owes a big thank you to Mike Ryan for he is the one who chiseled John Abraham into the dreamboat that he is. Mike has worked with him on many movies and the bulked look that John exhibits is because of the specific workout plans that Mike gives to him keeping in mind the character John is playing. Having worked with John, Mike has also worked in maintaining the overall fitness of the star. 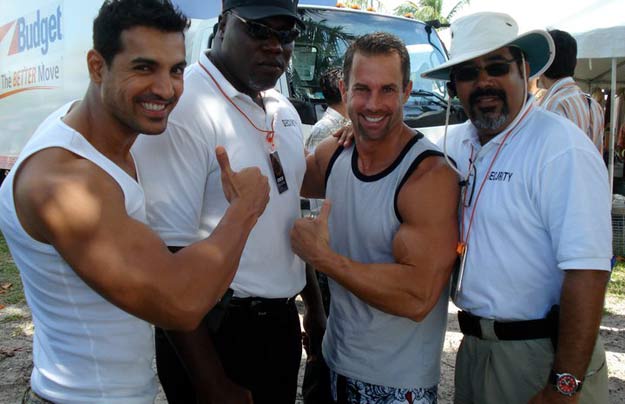 Vinod Channa has been in the fitness industry for more than 16 years and has been called by business professionals, famous celebs, world class athletes seeking guidance on overall fitness and weight loss management. He has worked with celebs like John Abraham, Ritesh Deshmukh and Shilpa Shetty. However, his latest success story (and probably the biggest) is Anant Ambani, the younger son of Reliance Industries’ chief Mukesh Ambani. Vinod guided Anant lose around a staggering 108 kilos in less than 18 months. 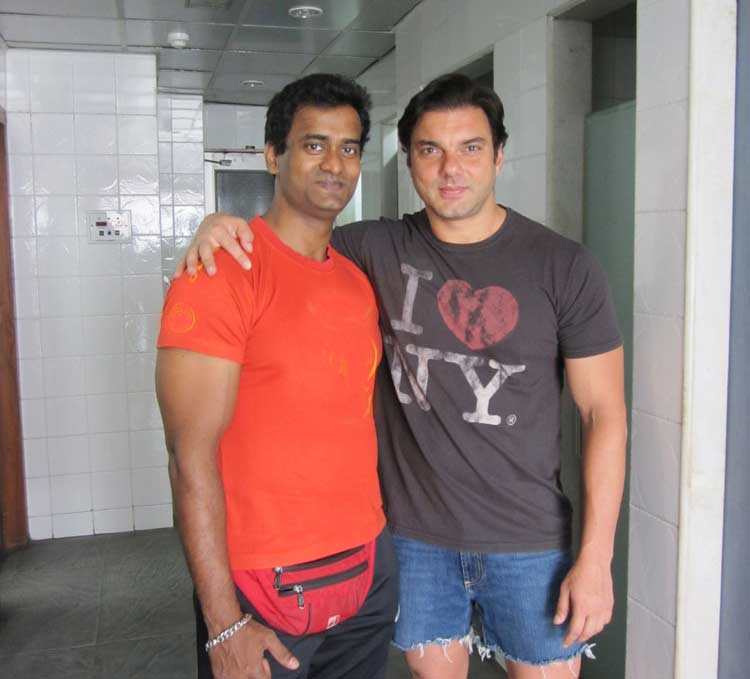 Rujuta Diwekar is another celebrity nutritionist and fitness expert who has transformed many bodies in Bollywood. She lays emphasis on local grown and available foods and has been the force behind the “Zero Figure” of Kareena Kapoor in Tashan that created a stir in the industry with every girl next door wishing to achieve the size ‘zero’. Rujuta was voted as 50 most powerful people in India by People magazine in 2012. Anil Ambani has also been taking guidance from her for many years now and she calls the business the most disciplined man that she has ever met. Apart from Anil Ambani and Kareena Kapoor, she has guided many other Bollywood actors like Karisma Kapoor, Anupam Kher, Richa Chadda and many more. She is the author of the best-selling “Don’t Lose your Mind, Lose Your Weight” 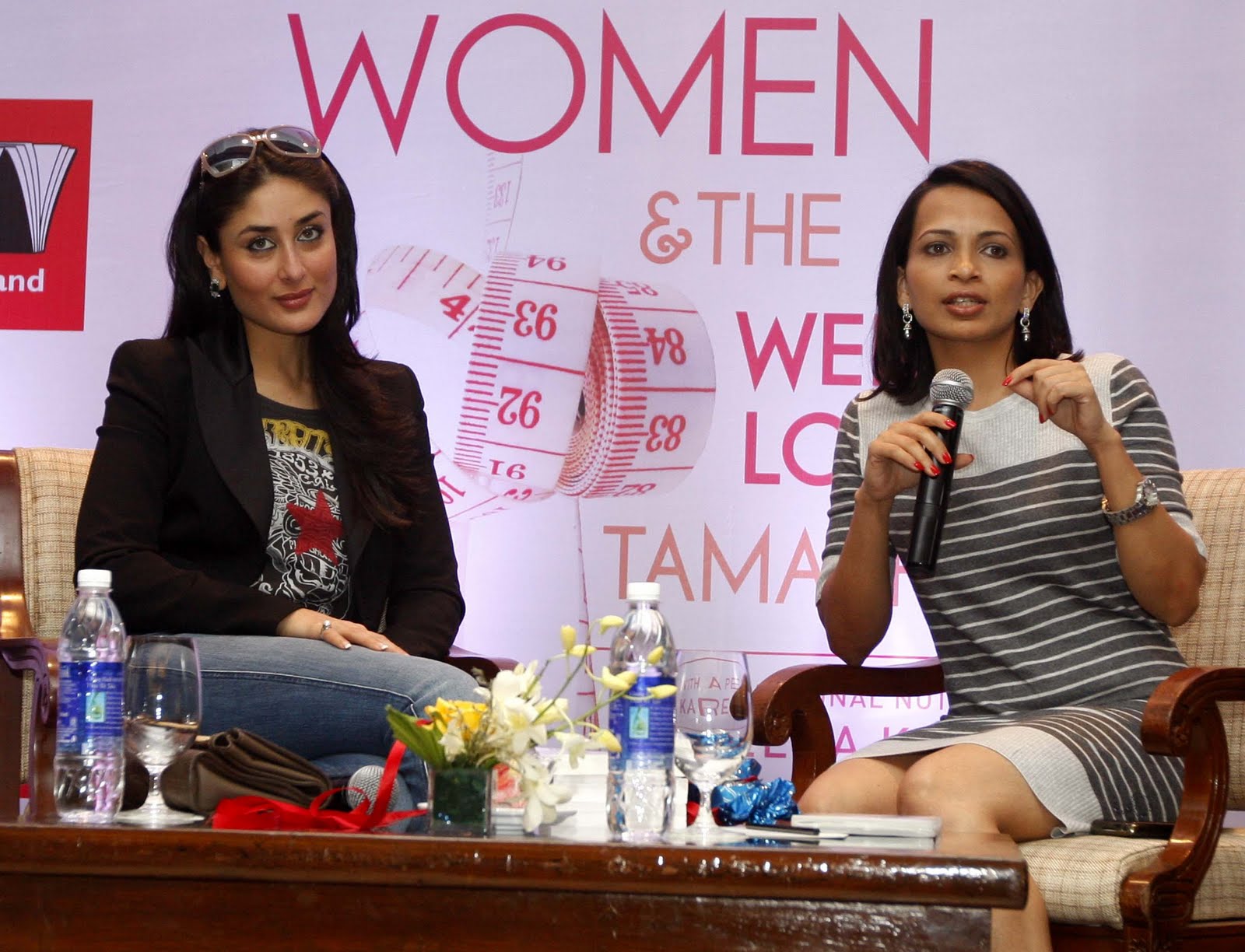 Malika Arora Khan, Shraddha Kapoor and Jacqueline Fernandis have a figure which usually women only dream off. Pilates instructor and celebrity trainer Namrata Purohit has played a significant role in helping these stars achieve the fitness level they desired. Her workout sessions are a hit among the B-Town girls. Her fitness studio is also frequented by Kangna Ranaut, Elli Avram and Mandana Karimi. Namrata also works with a long list of sports personalities, including cricketers, football players, international squash players and swimmers. 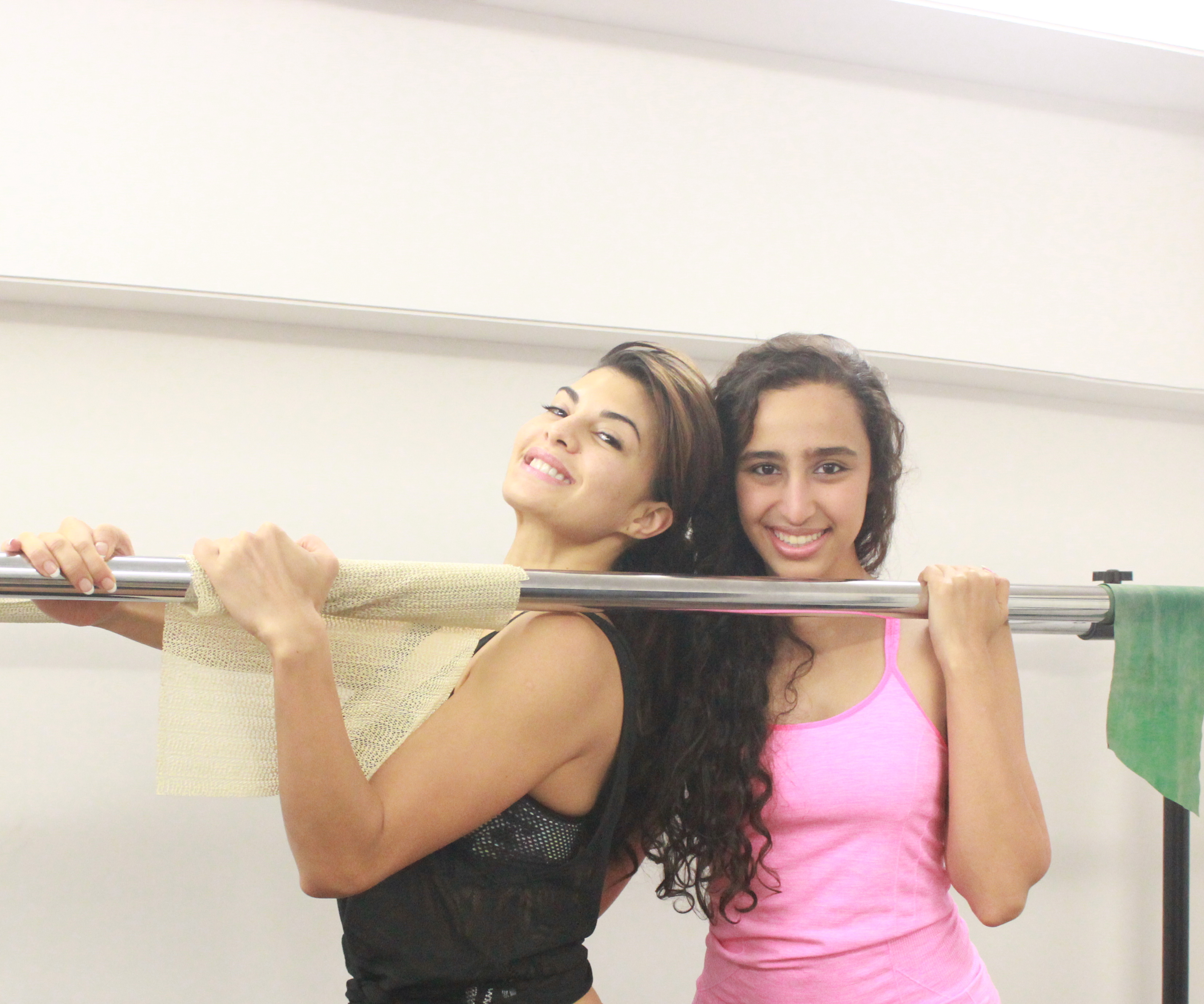 This girl has been into the fitness industry for good 22 years and has worked with the leading celebrities of the B-Town. Yasmin was the force behind Katrina Kaif’s gorgeous looks in Tees Maar Khan and Deepika Padukone’s beautiful frame in Ram Leela. She has also worked with Alia Bhatt and has been behind the transformation in Zarine Khan that cannot go unnoticed. 12 years back she founded her fitness studio ‘Yasmin’s Body Image’ and is also the first Indian instructor of Pilates. She also owns a Pilates studio in Mumbai. 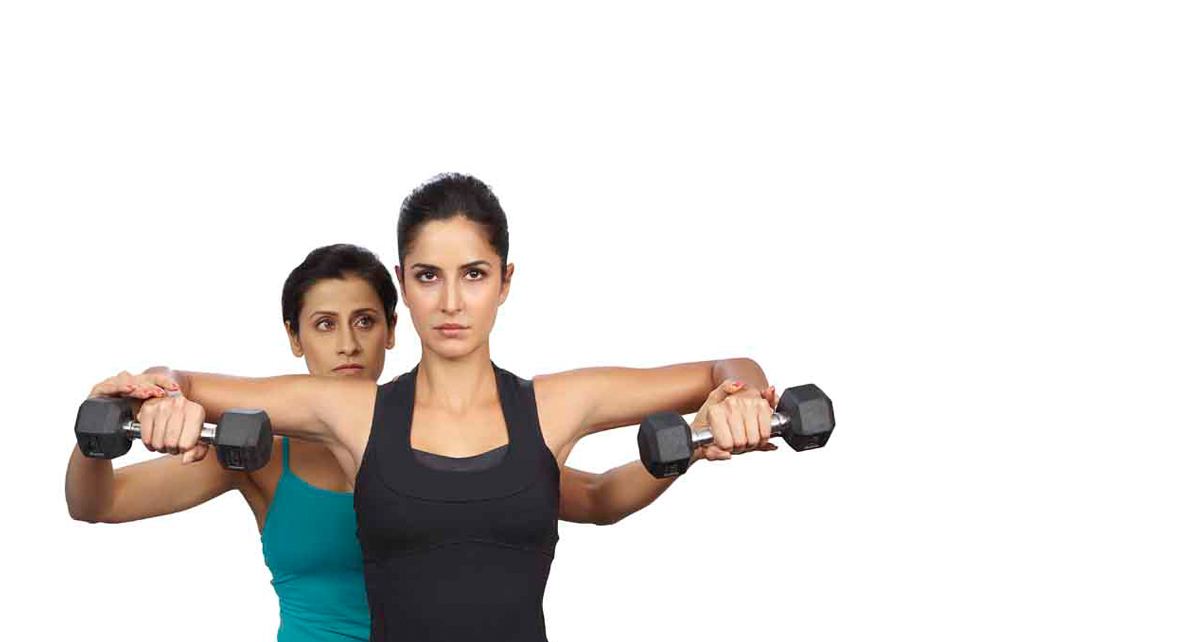 Deanne Panday is one of the India’s famous celebrity fitness experts. Besides, she has authored the bestselling ‘I’m Not Stressed: Secrets for a Calm Mind and a Healthy Body’. She has been the force behind some of the hottest and fittest people for so many years. Some of her celebrity clients over the years are Bipasha Basu, Dino Morea, John Abraham, Lara Dutta, Sonakshi Sinha, Jacqueline Fernandez and Bobby Deol. She has set up some of India’s finest gyms and her own boutique gym, ‘Play’ consists of a high-end gym, spa, and yoga studio. She also launched Bia Brazil, a top lifestyle workout gear for women. 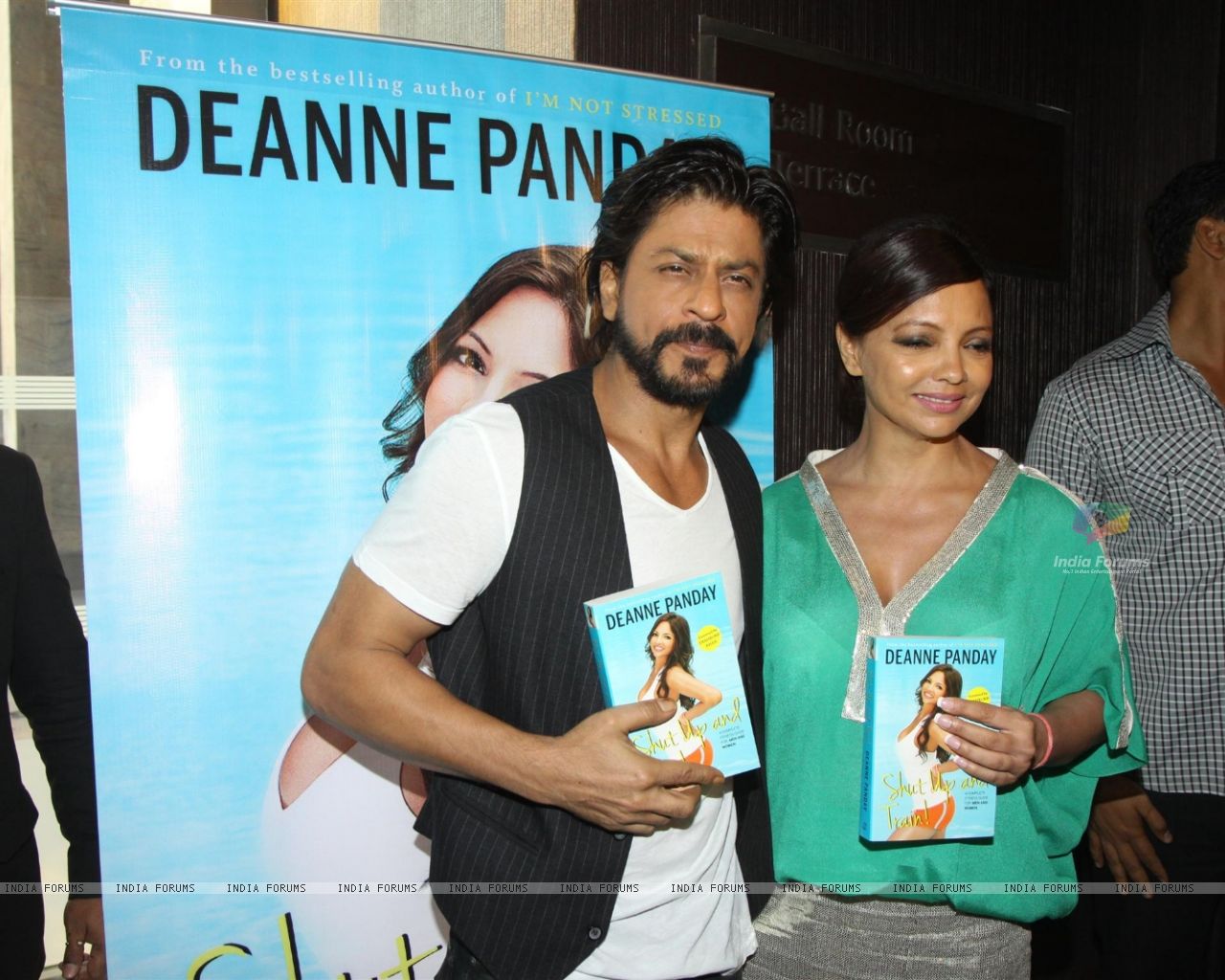 Radhika Karle runs fitness studio, Balanced Body in Mumbai and is one of the most sought-after fitness and wellness experts in India. Her list of celebrity clients includes Sonam Kapoor, Nargis Fakhri, Tanya Ghavri, Kirthiga Reddy and Rhea Kapoor. In her journey from fat to fit, Sonam Kapoor owes it big time to Radhika Karle who has an experience of more than a decade in the fitness industry. We are aware of the fact that Sonam was overweight and how she shed those extra pounds before her debut in Saawariya and it was under the guidance of Radhika that she achieved the perfect shape and became an inspiration for those who are struggling with weight issues. 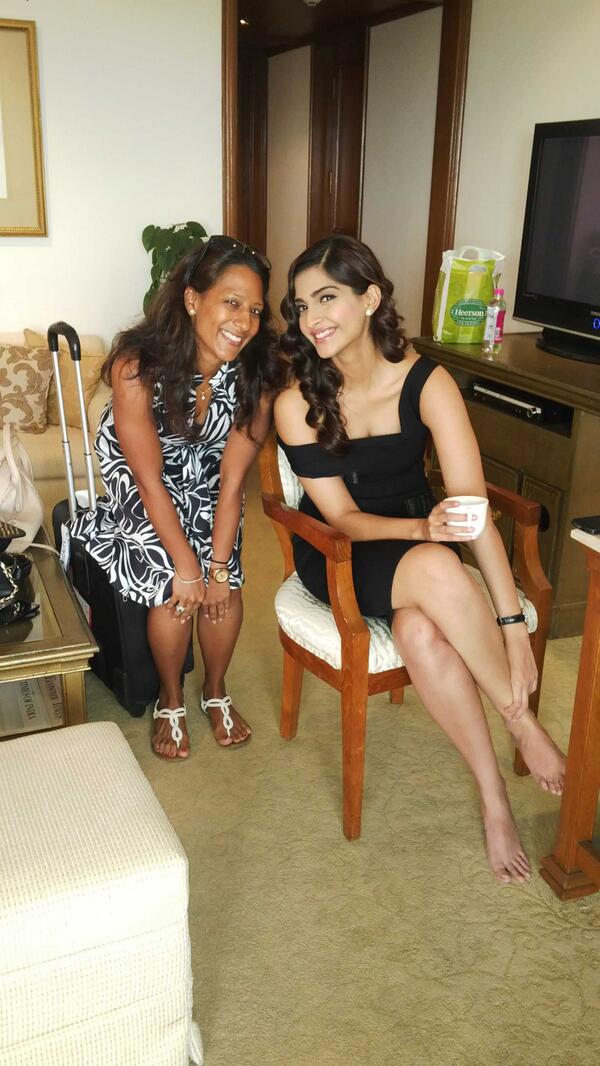 Payal Gidwani is one of the leading yoga practitioners in Mumbai with a bevy of celebrities, including Kareena Kapoor Khan, Saif Ali Khan, Rani Mukherjee, Jacqueline Fernandes, Farah Khan and Suzanne Roshan. She also runs ‘Cosmic Fusion: The Yoga Wellness Studio’ in Mumbai along with her husband, Manish Tiwari, who is also a yoga guru and has trained the likes of Sridevi and Katrina Kaif.

Payal is also the author of the the best-selling ‘From XL To XS’, in which she shares ‘simple and easy-to-follow principles and exercise routines, how to lose (or gain) weight, stay fit, and transform your body structure’. 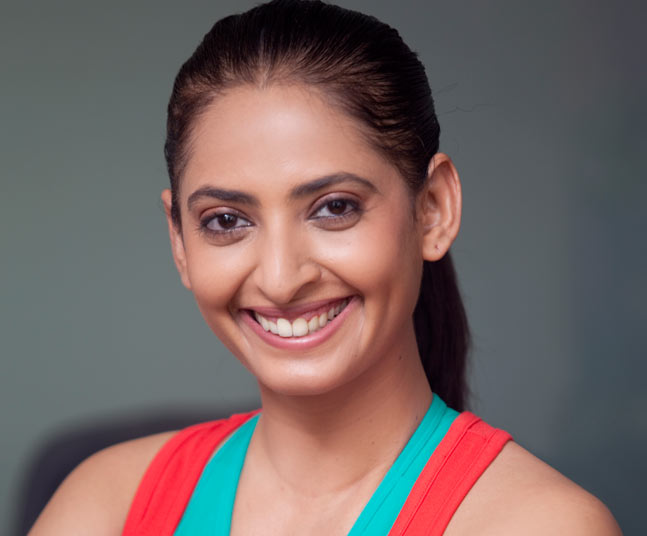